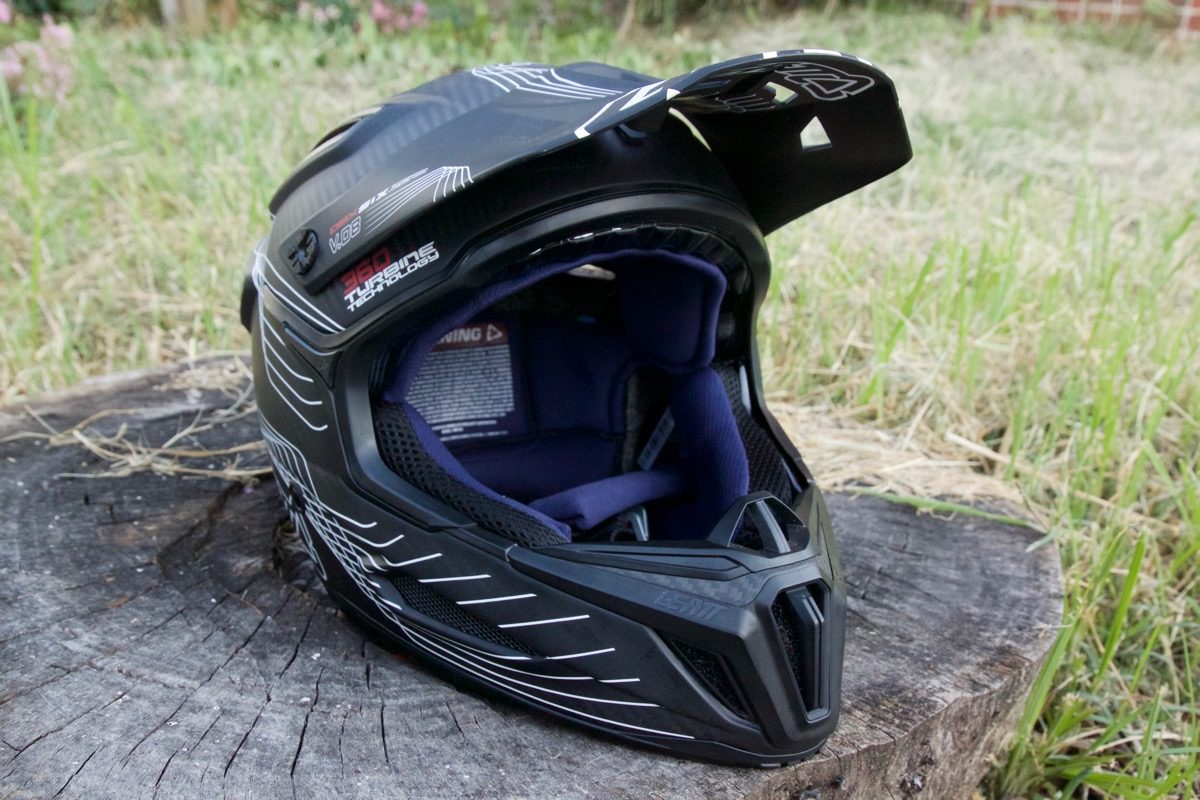 The Leatt DBX 6.0 Carbon full face mountain bike helmet is NOT messing around. Not only does this helmet pack serious safety features, it packages everything into a sleek, accessible package that’s every bit as refined as it is practical.

Safety is not only the #1 reason mountain bikers wear helmets… it’s really the only reason. Leatt approached the DBX 6.0 design, as they seem to do with all their protective gear, with the goal of not just meeting safety standards but exceeding them and innovating wherever possible.

Take the company’s Turbine 360° Technology. Actually before we look at that, let’s back up and consider how concussions work. From xlintbrain.com:

The brain floats unattached inside the skull that has ridges and shelf-like areas. The brain is a delicate organ, similar to the consistency of soft butter or slightly-set gelatin. Any sudden movement with force can result in the brain sliding back and forth which can cause temporary and permanent cognitive damage.

One of the purposes of a high-end mountain bike helmet is to limit the suddenness of any impact to the head which might cause the brain to slide back and forth. Leatt’s Turbine 360° Technology works to reduce brain acceleration from an impact through the use of simple-looking rubber disks that mute and deflect forces to the rider’s head. Essentially these little dots, placed inside the helmet, allow the helmet to move independently of the wearer’s head in the event of sudden impact. MIPS technology works in a similar but limited way, albeit with a much simpler mechanism. Leatt claims up to a 30-40% reduction in concussion forces in an accident thanks to Turbine 360° Technology. 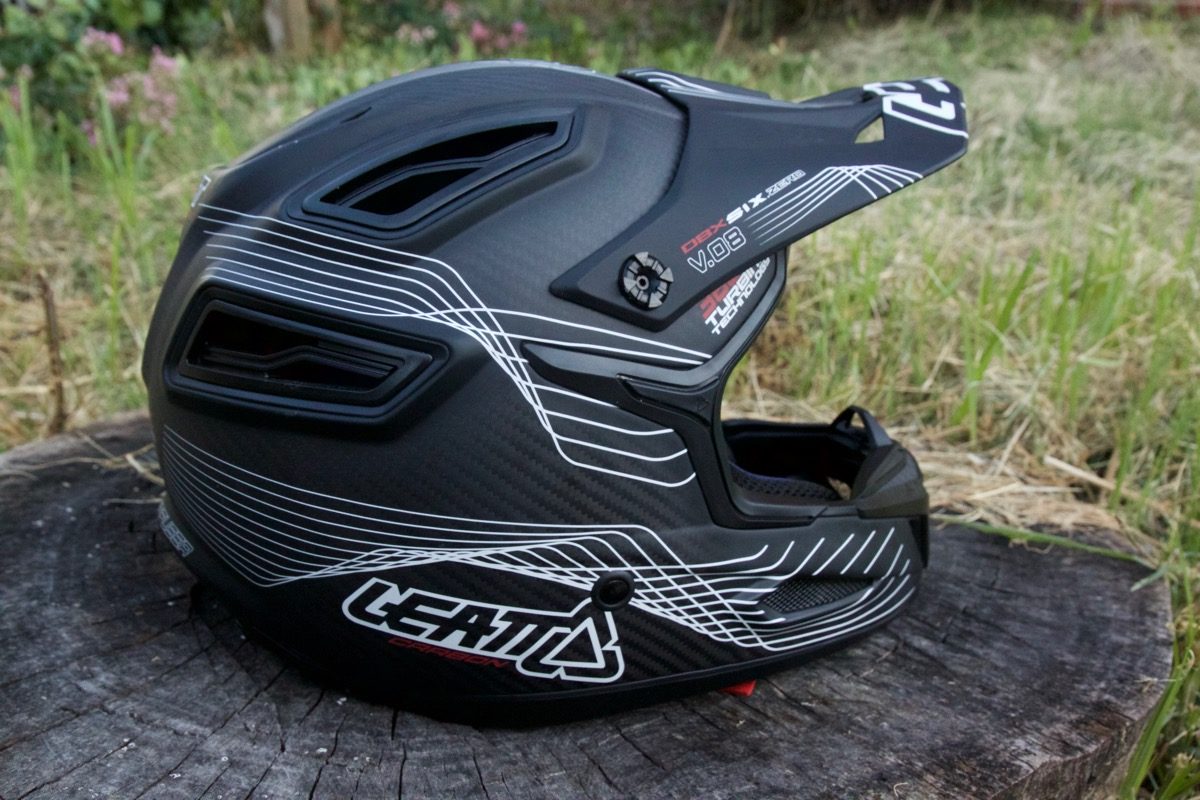 The DBX 6.0, like other helmets, is also designed to prevent head abrasions and skull fractures. The In-Molded V-Foam soaks up forces from an impact while the carbon shell gives the DBX 6.0 Carbon serious backbone and rigidity. 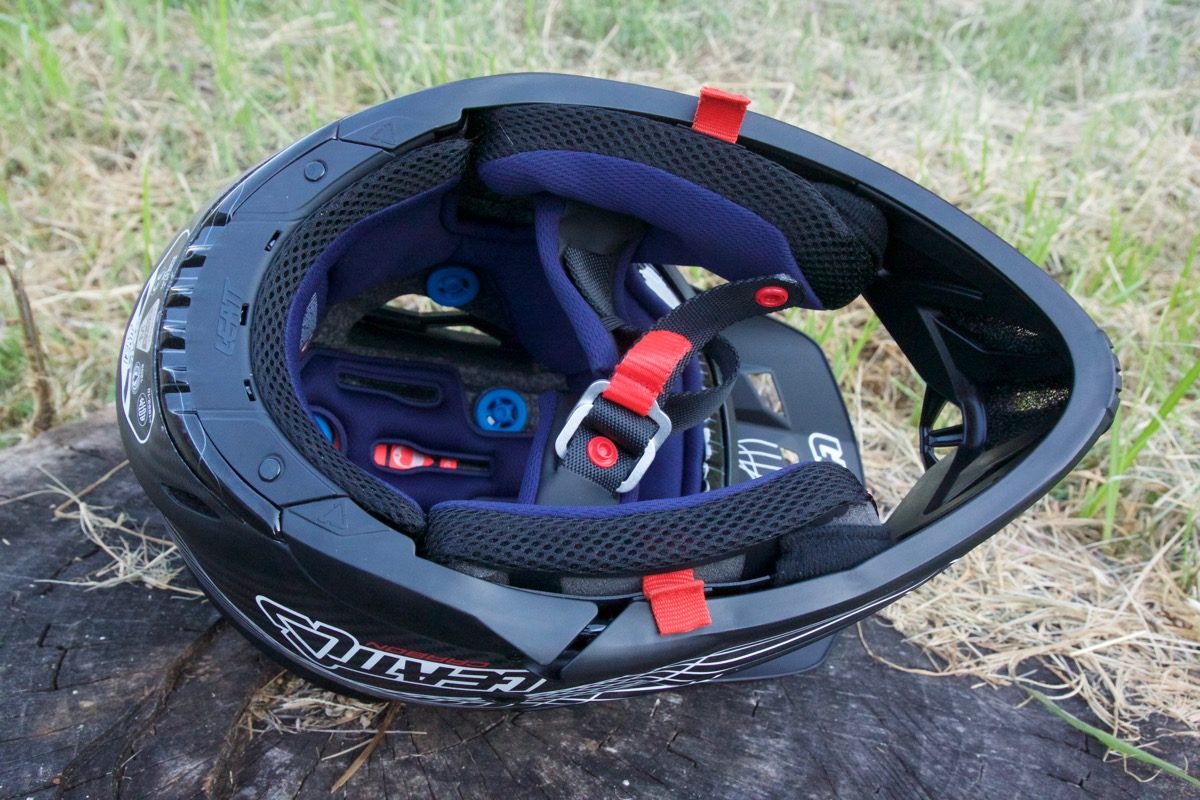 Moving inside the helmet, the DBX 6.0 has thick cheek pads for added insulation and protection, and a full chin bar to reduce the potential for facial injuries. The visor is designed to break away in the event of a crash, minimizing twisting head and neck injuries.

Leatt is known for their protective neck brace line and as such, the DBX 6.0 Carbon is designed to work well with the company’s neck braces. Slap on a pair of googles and add a neck brace to enter a virtual cocoon of safety.

Fortunately I haven’t personally tested any of the safety claims made about this helmet but based on my research, this helmet seems to offer many important safety features that should instill confidence in any rider. 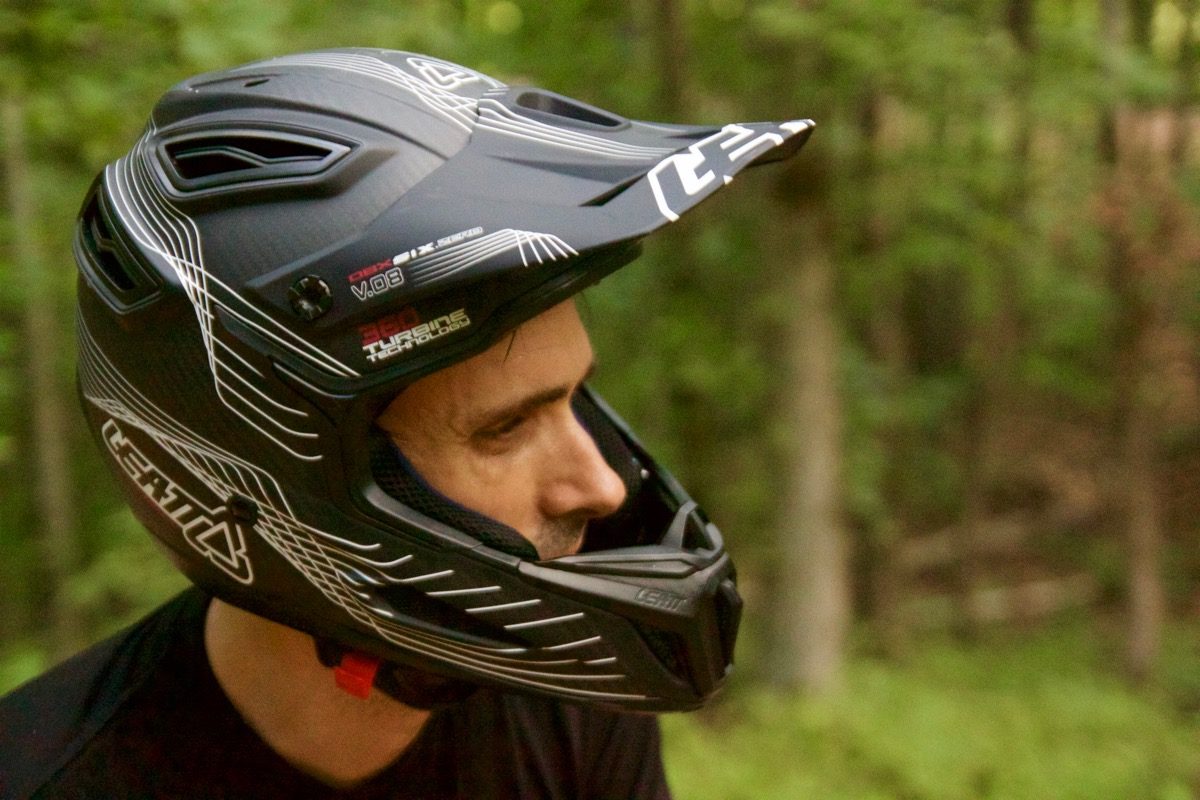 Most of us don’t wear full face helmets outside of the bike park, so the added weight of a full face helmet is often noticeable, manifesting in a sore neck after just a couple hours of wear. During my testing, however, I can honestly say this helmet wasn’t so heavy that it bothered my neck or even felt all that different from my trail helmet. The size medium helmet I’m testing has a claimed weight of 995g, ±50g and the actual weight, 1020g, comes in well within that range. 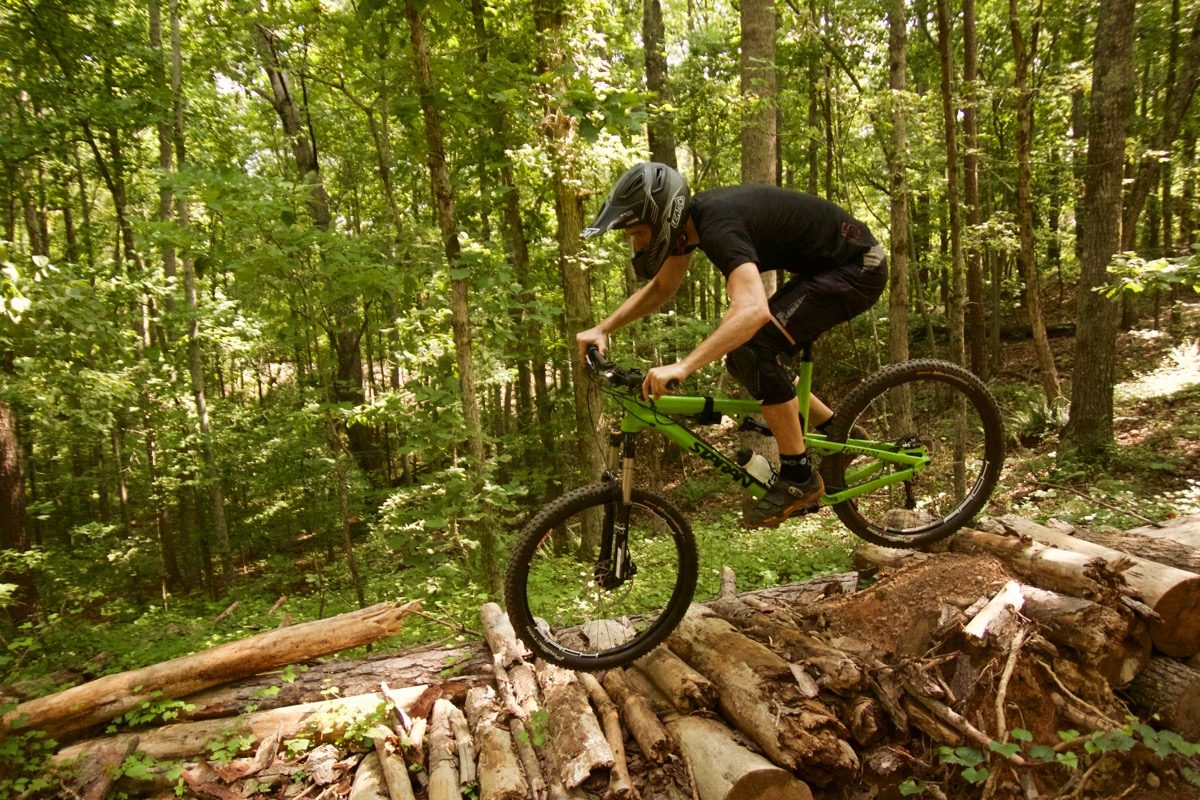 I’m often skeptical when anyone claims a full face helmet offers good ventilation, but the Leatt DBX 6.0 Carbon actually delivers, at least as well as can be expected. On hot summer rides I felt just slightly hotter and muggier than I would with a trail helmet, but not enough that I felt the urge to ditch the DBX. And isn’t that what it’s all about? I mean, if I can wear a full face helmet and be roughly as comfortable as I would be in a trail helmet, that means I’ll actually wear the thing while getting the benefit of increased coverage and protection.

The padding inside the Leatt DBX 6.0 Carbon is plush, soft, and comfortable. The thing is, the padding better be comfy because the pads fit tight against the rider’s cheeks and back of the head.

The liner is removable and looks to be substantial enough to hold up to repeated washing. I’ve had to retire plenty of helmets for no other reason than the fact that the padding got worn out to the point of being flat and scratchy. Fortunately I don’t think this will happen to the DBX 6.0 padding anytime soon. 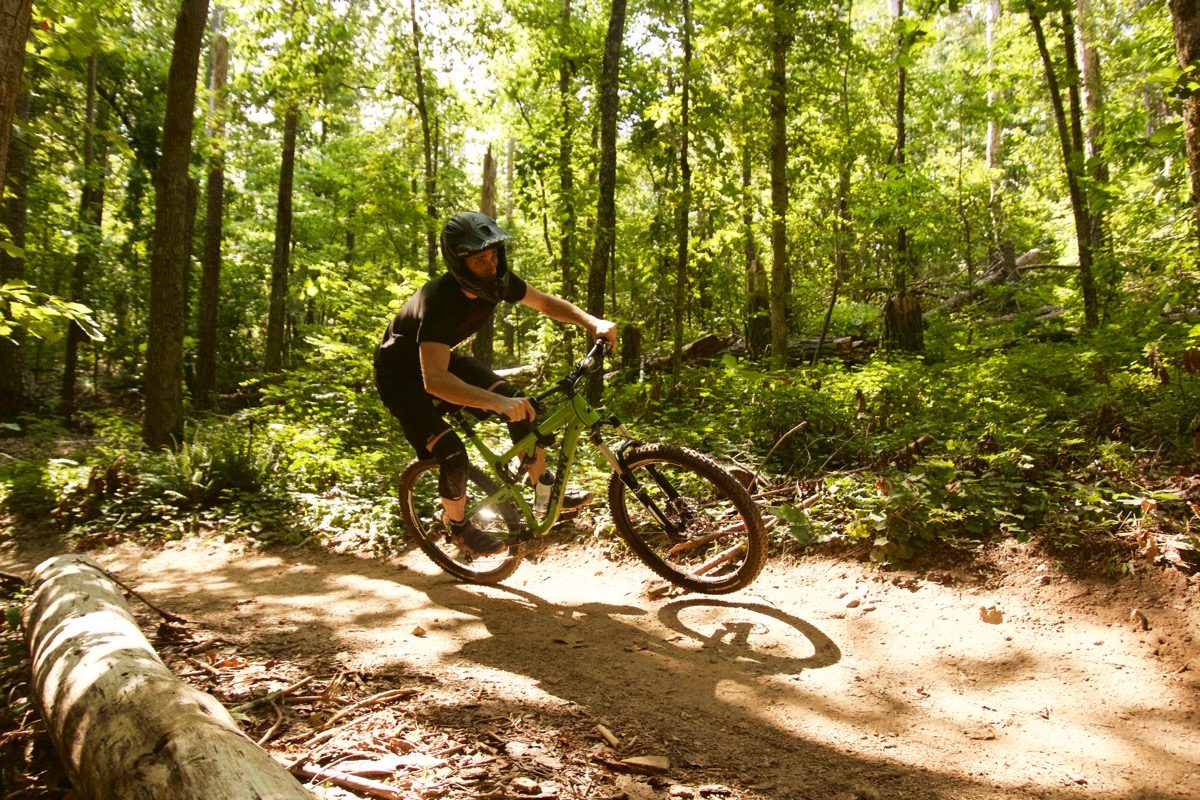 Leatt has worked to reduce the volume of the outer shell, which has safety benefits, yes, but it also gives the helmet a streamlined look. No one wants to look like a Bobblehead on the bike, and thankfully this helmet minimizes the effect. Peripheral vision is excellent–I didn’t experience any blindspots on the trail.

Thankfully I’ve never been in a serious crash with a head injury, but it’s good to know Leatt has put a lot of thought into what this involves. When someone has a potential head or neck injury and they’re lying on the ground, it’s important to minimize any movements that might cause further injury. That means yanking a tight, full face helmet off someone’s head es no bueno. For this reason, the DBX 6.0 helmet features removable cheek pads on each side of the face. Medical responders simply pull down on the red tabs to remove the thick pads, making removing the helmet much easier. 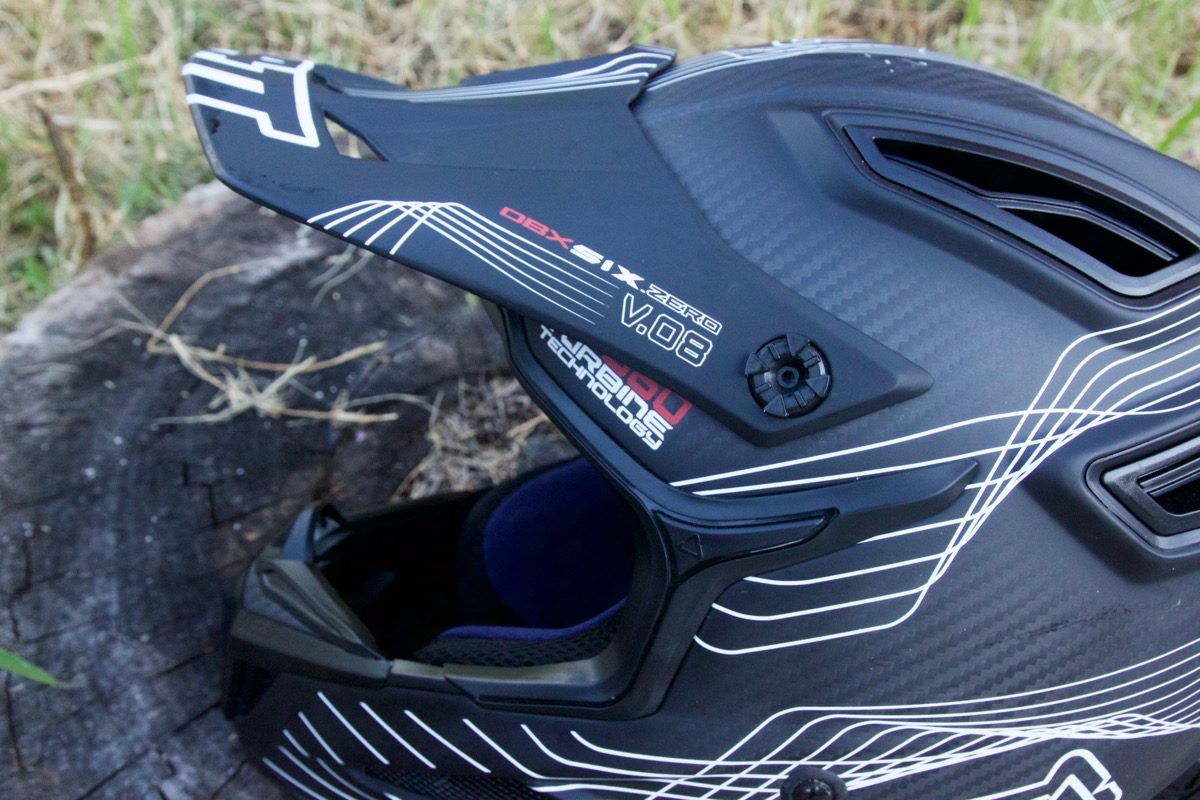 Earlier I mentioned the breakaway visor and here, Leatt uses nifty screws to secure the visor in place. The screws are the part that actually breaks away in a crash, and the replacement screws (included) can be used as a tool to remove the old, broken screws. The whole thing is very snake-eating-its-tail but trust me, it’s cool and it works. 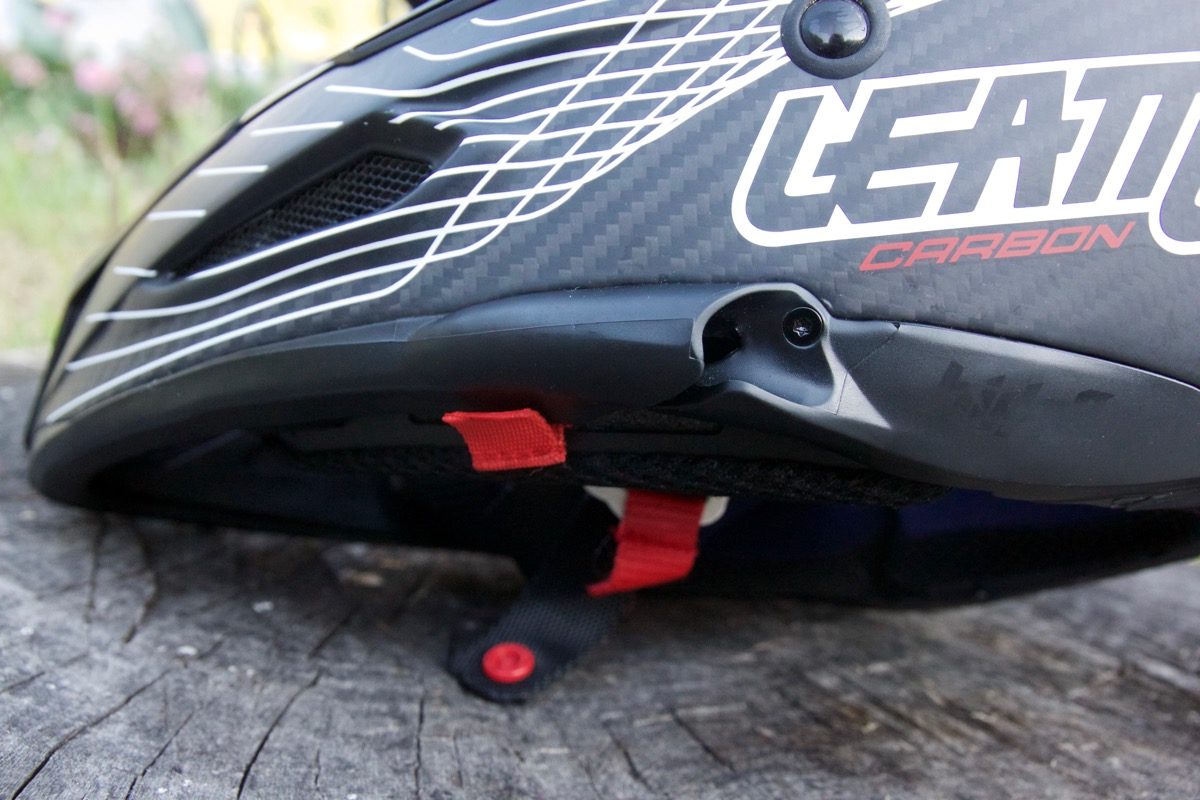 Finally, the DBX 6.0 Carbon has a port for a hydration pack hose. Leatt makes their own hydration pack which works perfectly with the helmet, though it’s also possible to use the port with hydration packs from other companies. This is a nice touch since drinking out of a water bottle is complicated by the chin bar that you will, at some point, forget you’re wearing. Yes, it will be embarrassing when it happens but remember, everyone does this at least once a season.

At this point I would normally list out any problems with the helmet but to be honest, there is nothing about the DBX 6.0 Carbon I didn’t like. Sure, I could talk about the drawbacks of full face helmets in general (they’re hot, heavy, restrictive) but that’s just par for the course. Even the price, while expensive at $499, is on par with what other companies charge for carbon shell, full face helmets.

For riders interested in extra protection on the trail, the Leatt DBX 6.0 Carbon is an excellent choice. The DBX 6.0 Carbon is easily the most comfortable full face helmet I’ve tested and is bristling with safety features both amateurs and pros alike will appreciate in the event of a crash.

Thanks to Leatt for providing the DBX 6.0 Carbon helmet for review.

Gear
These MTB Deals are Fire, including 40% off Patagonia Dirt...
Gear
The Maxxis Minion DHF Tire is Still the One to...
Gear
Mountain Bike Tire Repair Tips: From Emergency to Semi-Permanent
Gear
Never Underestimate the Power of a Good Zip-tie
Subscribe
Login
Please login to comment
2 Comments
Most Voted
Newest Oldest
Inline Feedbacks
View all comments

The brain doesn’t “slide back and forth”, banging against the side of the skull:

Fair enough. Apparently there is conflicting information on this subject.