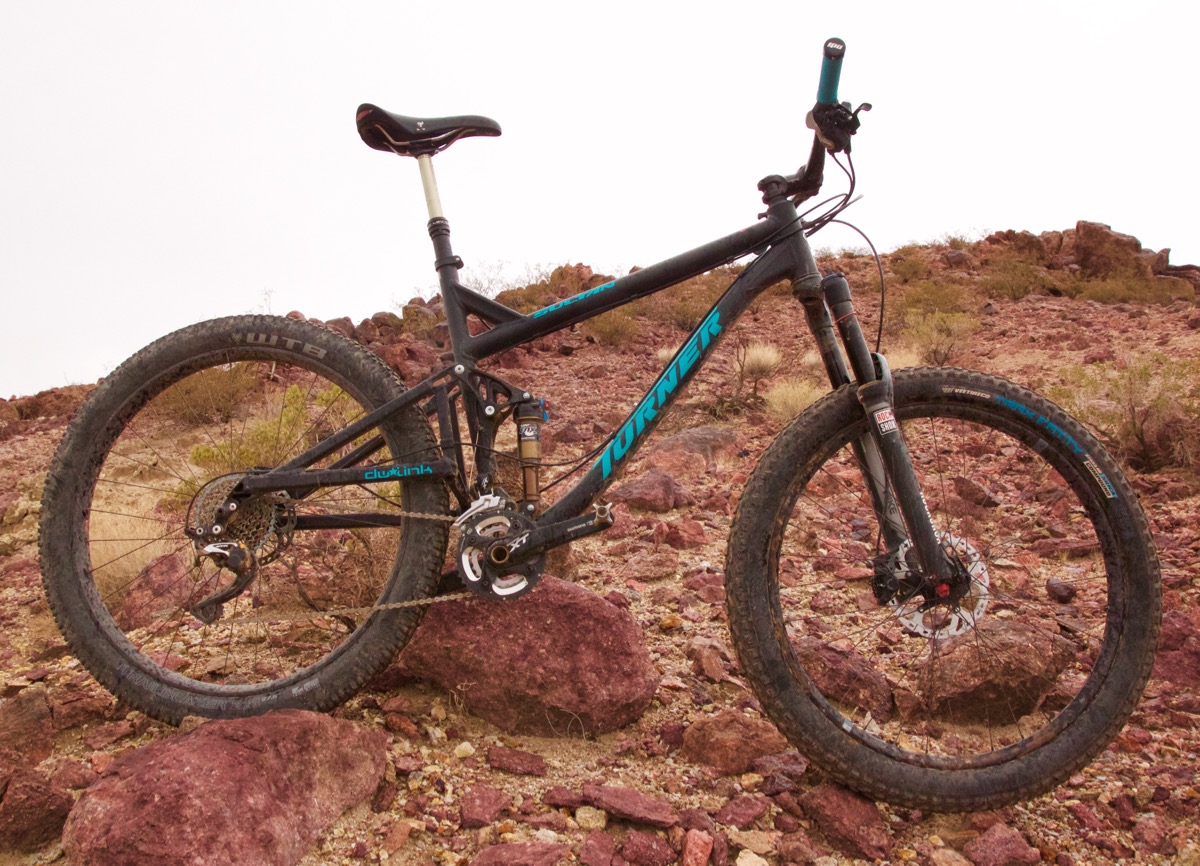 Spoiler alert! The Turner Sultan 27.5+ was my favorite of the seven mountain bikes I tested at Outdoor Demo last week. Readers may be familiar with the Sultan as a 29er trail bike, but the Sultan I rode was a 27.5+ version which isn’t listed on the Turner website yet. 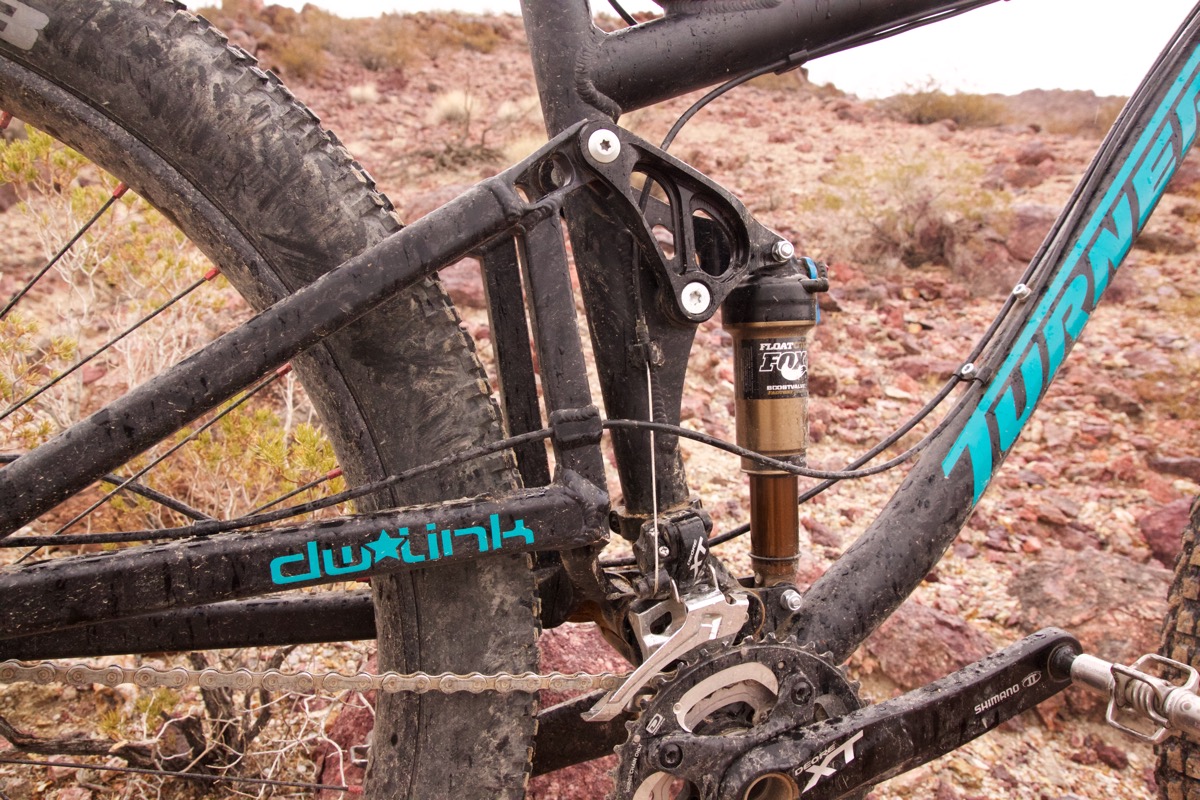 Like the original Sultan, the 27.5+ version I tested features 125mm of rear suspension travel and 140mm of travel up front. The frame is designed around a DW-LINK suspension setup, which is favored by many trail riders for its anti-squat abilities, traction, and bump compliance. Up front, the bike I tested was kitted with the most excellent RockShox Pike suspension fork. 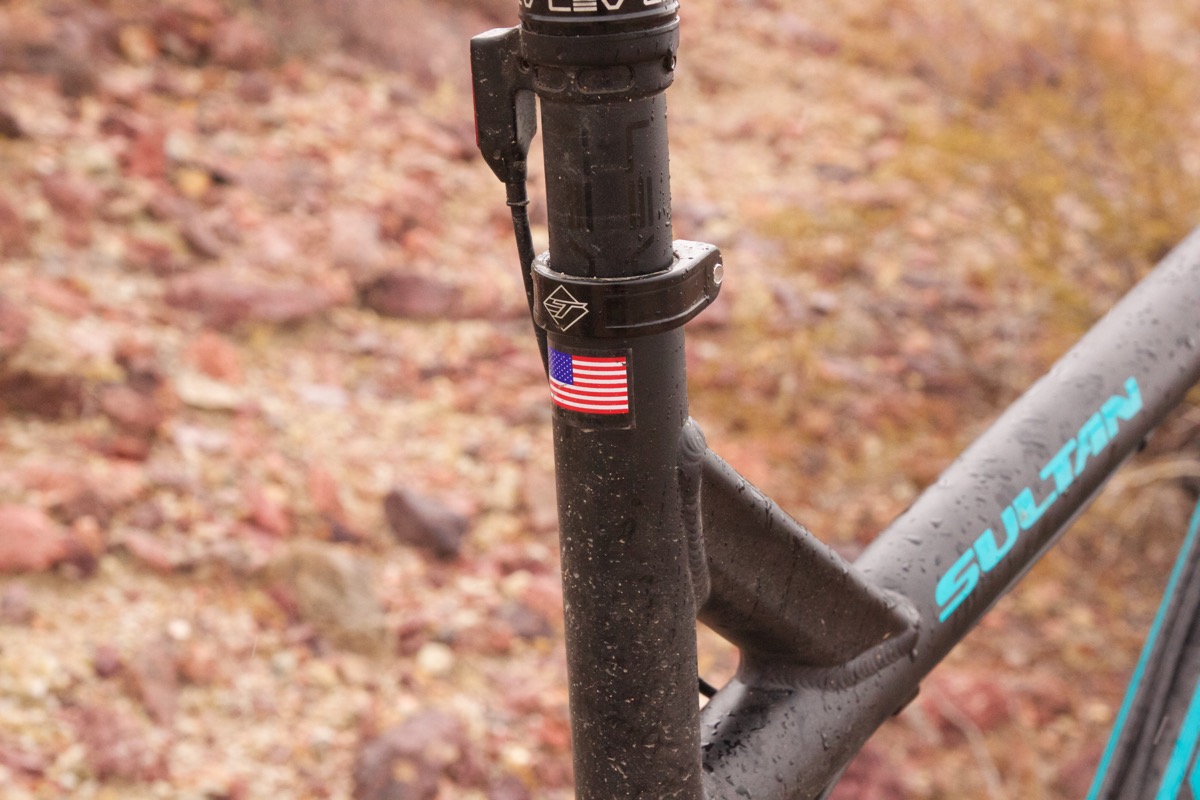 Turner is notable among American bike companies for producing their aluminum bikes entirely in the USA. The Sultan frame I tested was built by Zen Bicycle Fabrication in Portland, OR. 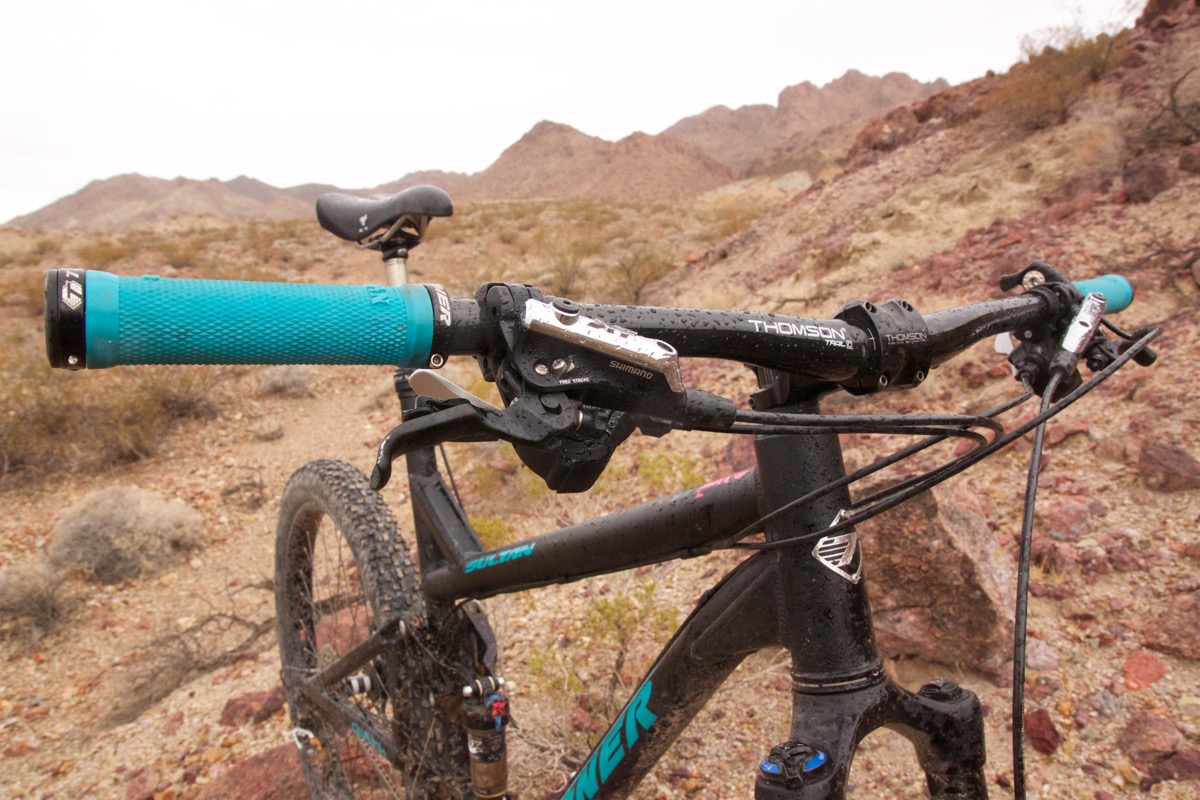 As far as build kits go, the Sultan is offered in several flavors, and the one I tested was nicely kitted with XT brakes and drivetrain, Fox Float shock, KS Lev dropper seatpost, WTB Scraper rims, carbon Thomson bars, a WTB Trailblazer 2.8 tire (rear), and a Vee Tire Trax Fatty 3.0 up front. If this were my bike, I would probably only want to swap out the 2×10 drivetrain for a 1x set-up. 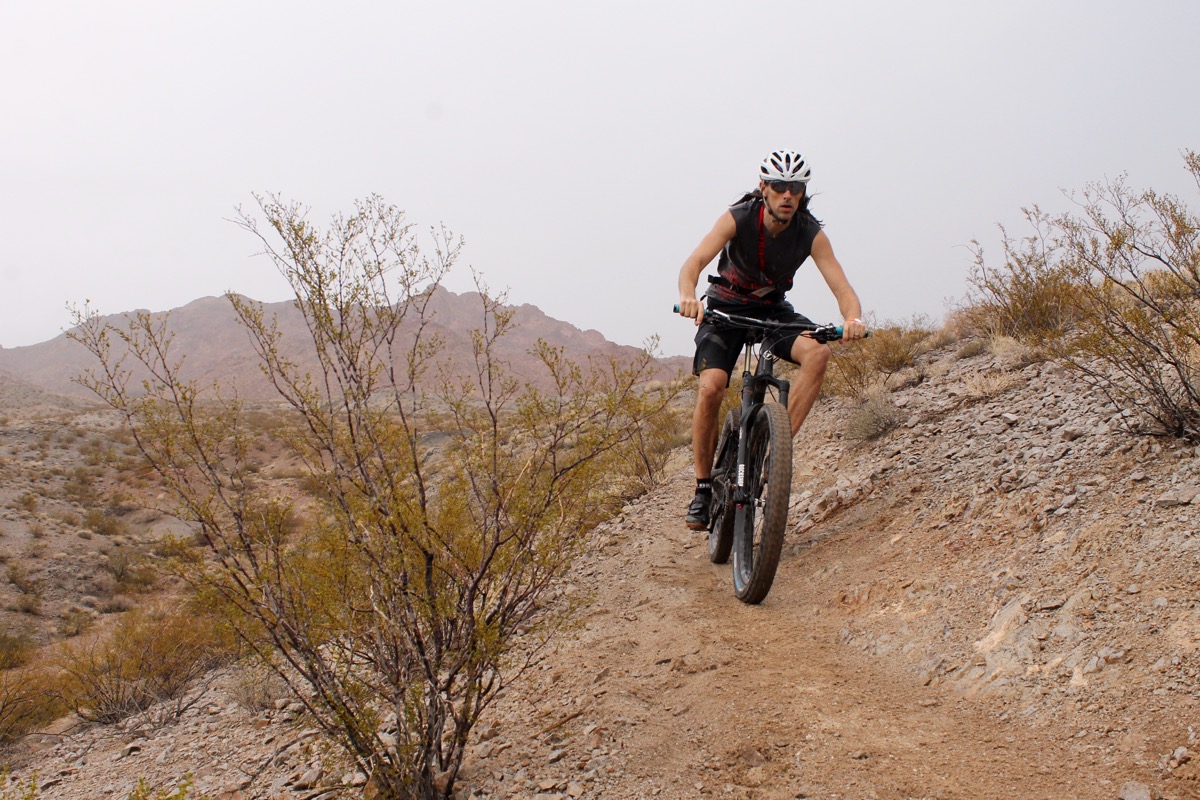 My personal bias is toward a balanced suspension platform (one with equal front and rear travel), but after getting on board the Turner Sultan I quickly reconsidered. With 125mm of rear travel, the Sultan climbs like an XC bike but descends just as quickly and smoothly as a longer travel trail bike. I suppose having just 125mm of rear suspension might be limiting for riders who huck off big drops but then again, this is a trail bike that’s made for going fast, not big.

At Outdoor Demo I got a chance to ride the Sultan with Greg, and much to my shock, I was actually keeping up with him (mostly) on the descent! This never happens and I have to admit, riding a plus-size bike really is a bit like cheating. The Sultan floated over high speed chunder with ease, and picking lines through larger rocks wasn’t really necessary. I was airing off of grade reversals, carving high-side turns, and pedaling into descents faster than on any other bike I’ve tested this year. And the Trax Fatty tire up front handled the loose stuff with ease. 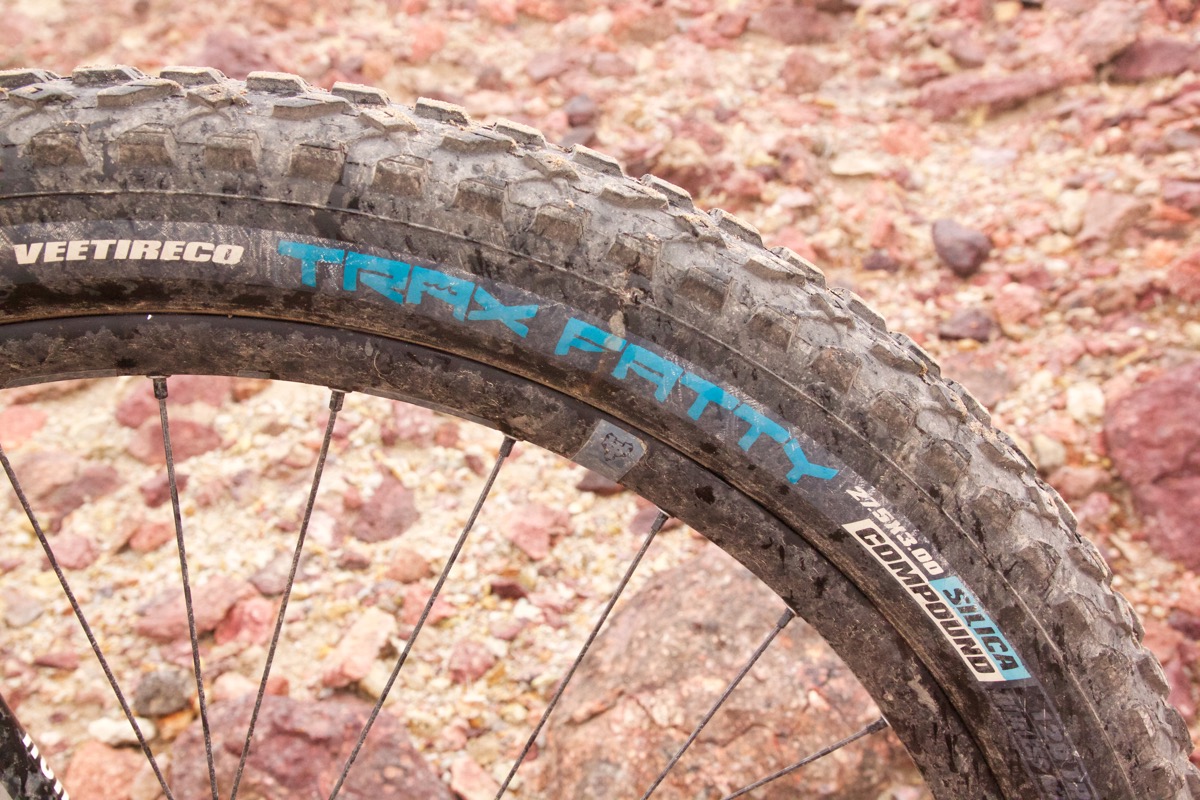 Climbing on the Sultan wasn’t too shabby, either. In slow speed, techy bits along the way, the Sultan 27.5+ proved incredibly maneuverable and responsive. My test rig didn’t feel heavy (nor was it crazy light either), and there was no noticeable pedal feedback, thanks in large part to the DW-LINK suspension design.

Admittedly I haven’t ridden the original 29er Turner Sultan but based on my brief test ride, I have to say 27.5+ wheels make this a super capable and fun bike. With 125mm of rear DW-LINK suspension and 140mm of luscious travel up front, the Turner Sultan 27.5+ is an excellent choice for the trail rider who wants to step up their game.