While some might think it’s odd to release a new product on April Fools day since many people might not take you seriously, Santa Cruz, on the other hand, seems to embrace the media hilarity and general online chaos that occurs every April 1st.

Yesterday, Santa Cruz announced the addition of 27.5″ wheels to their popular all-mountain rig, the Nomad. For a glimpse of what this full-carbon-framed rig can do, check out this stellar video of Dylan Wolsky and Iago Garay shredding stages from the Andes-Pacifico:

The new Nomad features a super-slack 65-degree head tube angle with a full 165mm of VPP suspension. A recessed link reportedly results in “some seriously compact chain stays,” and the cockpit features an extra inch of room. 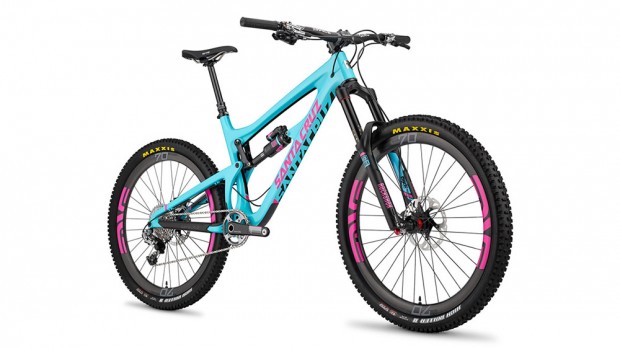 While the aqua/magenta color scheme might seem a little outlandish (and perhaps contributed to the feeling from many that this was an April Fools joke), the bike is also available in classic stealth black.

Other nitty-gritty details: The frame features high-quality internal cable and hose routing, and is only compatible with a single-ring drivetrain. The bike comes stock with a RockShox Pike RCT3 Solo Air 160mm fork, a Rock Shox Monarch Plus Debonair or Vivid Air RC2 shock, and a Rock Shox Reverb Stealth.

For more information, check out the Santa Cruz website.

Cool to see all these product releases ahead of Sea Otter. Announcements seem to be getting earlier and earlier–maybe they’ll eventually loop back around to Interbike. 🙂

Ha! Now that would be convenient!