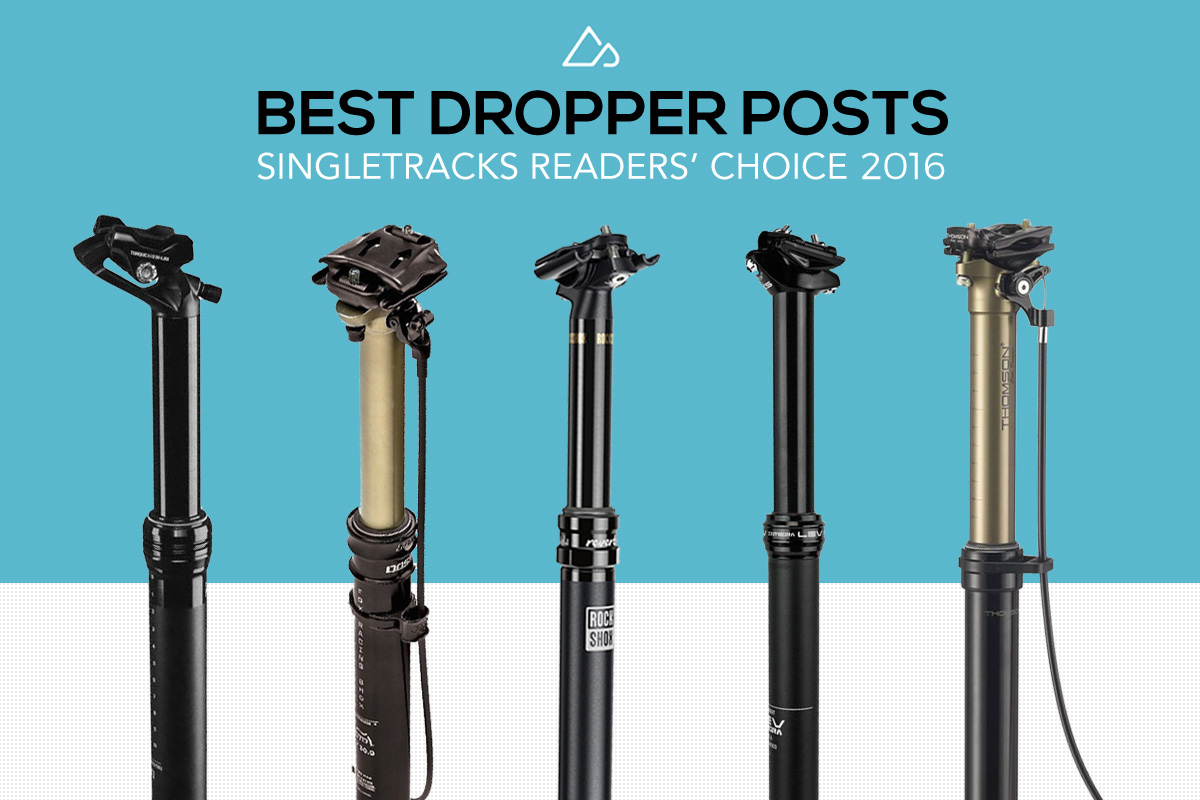 Dropper posts rank among the top innovations in the history of mountain biking alongside suspension, tubeless tires, and disc brakes. Why? Well, as Greg wrote in his “Over a Beer” column, they just make riding more fun.

Are they absolutely necessary? No.

Are they expensive? Yes.

Do they sometimes have less than stellar reliability? For sure.

But the vast majority of riders who have ridden with a dropper will gladly accept those drawbacks for the increased confidence in technical terrain, lower center of gravity, and improved clearance for getting airborne. With additional options coming to market all the time, and manufacturers including dropper post routing on just about every new frame – including XC and even some gravel bikes – they are here to stay.

This summer, we asked our readers to tell us what their favorite dropper posts were. Below are their top five picks. 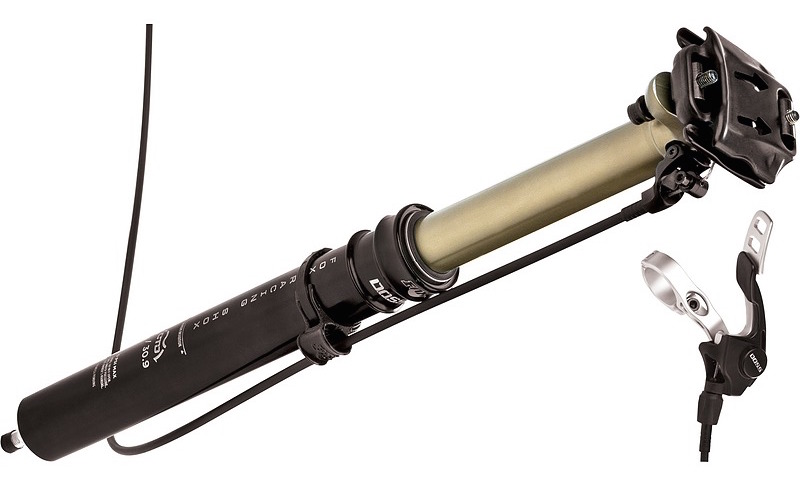 Fox’s D.O.S.S. post has been discontinued for about a year, but it still finds itself taking the fifth spot on our 2016 list. That’s probably due to the fact that the D.O.S.S. was one of the most reliable posts on the market. It was also known for its smooth action and minimal side-to-side play. There were some drawbacks to the D.O.S.S. though, namely it was limited to three preset positions and the remote was anything but svelte. Fox now offers the Transfer post in place of the D.O.S.S., which is infinitely-adjustable and uses a slimmed-down remote. 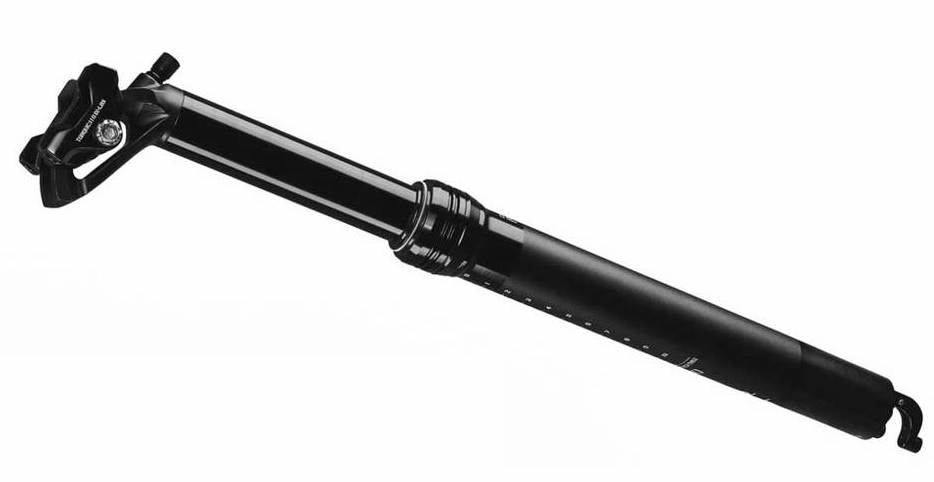 Considering Specialized’s bikes ranked highly in our survey results for all categories, it’s not that surprising to see their dropper post on this list too. The Command Post is a good post in its own right, though. It’s an all-mechanical post, although you can adjust the return speed by adding or removing air. The current IRcc model has 10 preset drop positions, so not quite infinite, but plenty for most riders. One of the standout features is the SRL remote, which has excellent ergonomics. While Specialized specs this post across their mountain bike range, it is also available for sale separately.

The Thomson Elite Dropper makes our list again this year, coming in at number three. It may be a bit more expensive than other posts, but the Thomson dropper is smooth and reliable. Thomson uses a cartridge system inside the post, so if something does go wrong, it’s a simple swap. The rub, however, is that the post is not user-serviceable, meaning you’ll need to send it back to Thomson or an authorized service center for repair. 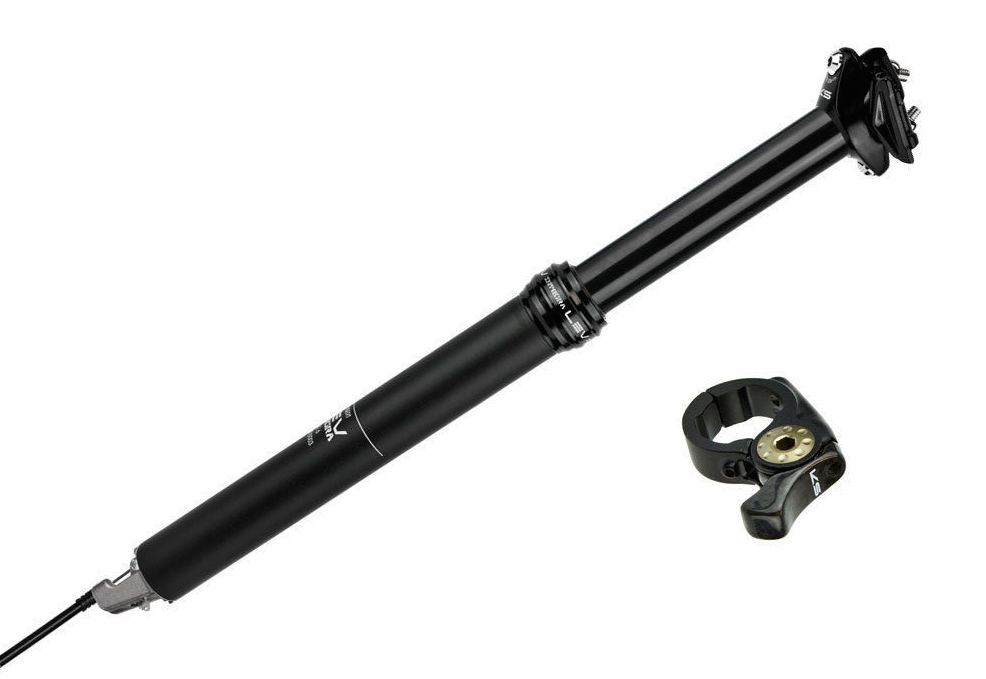 KS has a bunch of different models within the LEV line, but the most common is likely the internally-routed Integra. It’s smooth, infinitely-adjustable, and is relatively affordable – at least when it comes to dropper posts. The setup can be a little tedious, but as long as you follow KS’s instructions carefully, you’ll be dropping that saddle in no time. Their standard remote works okay, but for better ergonomics and more adjustability, be sure to pick up their Southpaw remote. 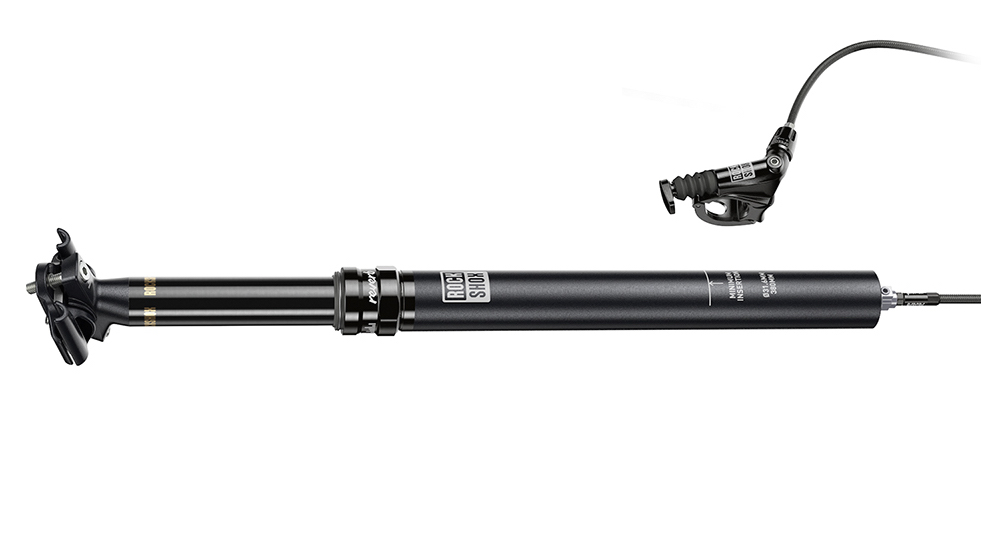 In our 2015 survey, the Reverb ran away with the top spot. For 2016, it’s the same story – the Reverb had two and half times as many votes as the runner-up KS LEV! RockShox wasn’t the first company with a dropper by any means, but since it’s introduction the Reverb has been the reference post for the industry. The Reverb is unique in that it is fully hydraulic – both the internals and actuation are hydraulic. RockShox has updated the Reverb for 2016 with simpler internals intended to make it more durable. They’re also one of the only companies to offer a post with 170mm of drop – good news for tall riders. The Reverb is a common sight on complete bikes from manufacturers without a house-branded post, and it’s also the top aftermarket choice. With Fox’s Transfer post as well as new options from RaceFace, Easton, and Bontrager now available, it will be interesting to see if anyone can knock RockShox off the pedestal in 2017.

I bought my Thomson Elite a couple years ago and it has yet to fail. The company made a modification and I had to send it to them once. Work was done quickly and it was back on my bike in 8 days (granted, I live only 340 miles down the interstate from their HQ). Maybe it is just familiarity, but I like remote trigger better than the Reverb’s I have used on demo/rental bikes.

The Reverb doesn’t have the best ergonomics for their remote. Especially if you are running a front derailleur and have to mount the remote on the top side of the bar.

I’am kinda surprised the Command Post ended up so high in the rankings. Reviews I’ve read indicate it has had some mechanical problems, like not returning to full high position, and sticking, and being difficult to maintenance.

I’ve been riding my Specialized Stumpjumper with Specialized Command Post for 6 months now, and it works great. Sometimes it doesn’t stop at the spot I’d like or gives when I reweight the seat, but that is mostly me not realizing till too late that I still have a tad of thumb pressure on the lever. They take some training to get timing dialed in. I ridded myself of coordination of a front derailleur, and added the equivalent skill requirement necessary to manage a dropper post. Can’t compare to other droppers, as this is my first. If you do a lot of big airs and pound them hard and long, I can guess they wear and tear, and get out of whack, more rapidly than does mine. Maybe that would cause the disappointment factor to increase. But I love them, and I’m not going back to a fixed post. At least not on my FS trail bike.

This is not a list of the best posts, but more a list of popular posts. The best posts aren’t in widespread use yet, and will never get the OEM contracts that the big makers do.

Curious to know which posts you think are actually better than these… I agree that there are probably some great ones out there that aren’t included on this list, I just haven’t personally tested enough posts to know what they are.

I have owned Reverbs, KS Levs, and now a Bikeyoke Revive. The Revive has been problem free for 4 months, which isn’t much yet, and the action/feel is much better. It is rebuildable at home, with no special tools, which is huge for me. I have a sagging KS that is not worth the money to service it so that I can sell. I had 1 Reverb that didn’t poo the bed, and I sold it while it was still good. The 9.8 Fall Line, and the Fox Transfer have very good reps locally.

I’ve had my Fox Transfer paired with a Wolftooth remote for over a year (~2k miles). Aside from the post sticking a bit a few months ago – which some lube seemed to resolve- i’ve had no issues. I’ve got a Reverb on my new Offering and it just doesn’t have the same feel as the Fox.