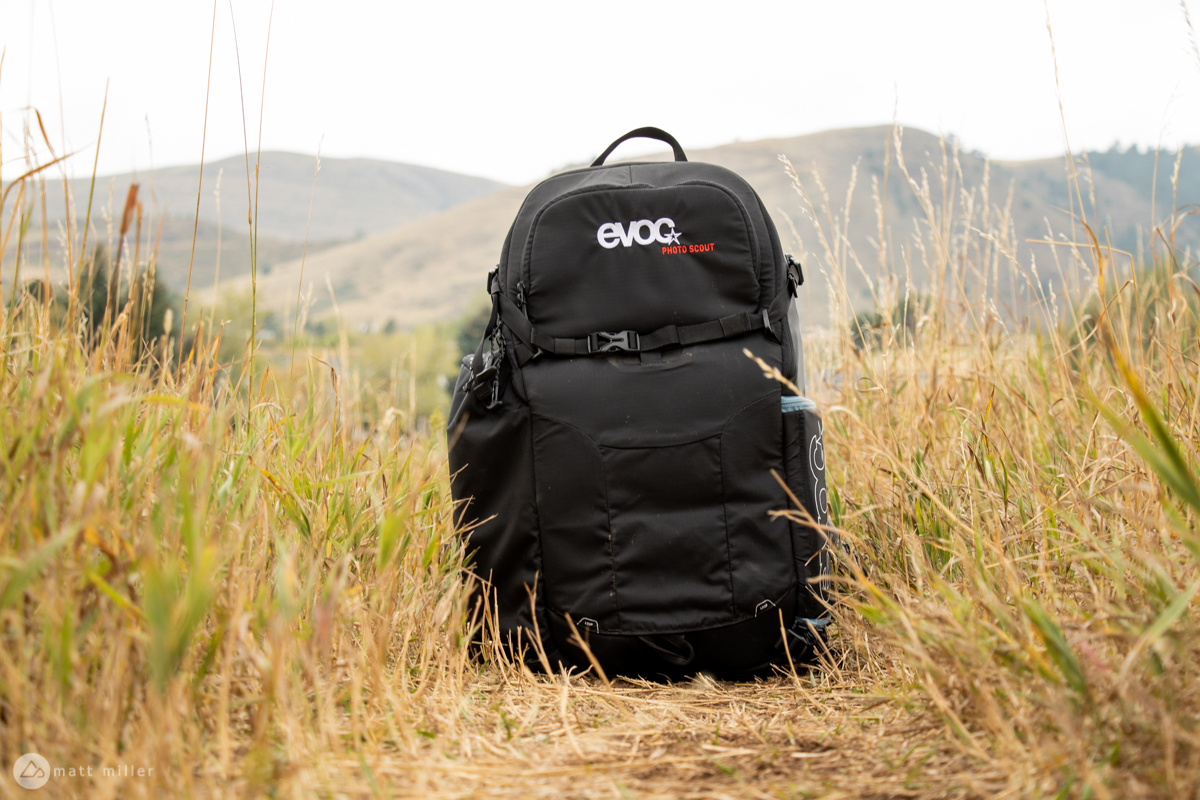 For mountain bikers who like to lug a DSLR along with them, it’s a worthy battle to find a pack that will hold a camera, plus ride gear, without it tearing the pack apart, or feeling like there’s a brick swinging around on your lumbar.

Evoc has made a name for itself in on-bike storage, bike transportation, and a variety of packs with different applications for mountain biking and snow sports.

The Photo Scout backpack is their answer for hauling along a DSLR on shorter, half-day rides or for other types of outings.

About the Photo Scout

The Photo Scout is meant to do a few things well, rather than everything half-assed. Up top, there is a small, fleece-lined goggle pocket that will fit a pair of goggles, or something similar, but not much else.

Next to the goggle pocket, toward the back of the pack is a larger compartment that’s useful for carrying miscellaneous things that are a bit bigger. Aside from the photo compartment, this is really the only place to put other things you may need to take on a ride, like a pump, snacks, tools, a rain jacket, and whatever else. This compartment is certainly big enough to carry all of that, and there’s also a zippered pouch on the inside for keys or anything else you really don’t want to lose.

On the outside of the pack, there is a cinch strap that goes across the top half, three loops toward the bottom for hooking up a tripod, or something similar, and a rain cover that will pull out from the bottom from a zippered pouch.

On the rider’s right is a quick-access pocket to pull out a DSLR with an attached lens. On the lower back is a zippered pocket that gives you access to the entire photo compartment.

Last but not least, a ventilated hip belt hugs your waist with two large pockets, one on each side of the belt.

Up until now, I had been throwing my DSLR in either my hydration pack, leaving little room for anything else, or into a larger backpack, with a bunch of towels or T-shirts to take up the excess room. Needless to say, I was excited to have the Photo Scout in for review.

I’ve taken the pack on some rides, long and short, and used it on foot when shooting Red Bull Joyride at Crankworx Whistler.

First off, the pack feels very secure on multiple levels. The majority of weight from the camera is snug and organized in the bottom of the pack and doesn’t swing around.

The hip belt aids with this. It’s probably the most secure hip belt I’ve seen on any pack. As mentioned above, the pack is ventilated, has velcro, and a snap buckle to keep it very tight. A snap buckle across the chest also helps the pack stay put.

Although the pack features secure straps, it’s still not perfect. On ascents, the pack felt fine and I didn’t have any complaints, but on descents, the top of the pack would come upward and push into the back of my helmet often.

If you’re the designated photographer for a ride, this may not be a big deal since you’re shooting and not shredding. It’s also a gentle reminder that thousands of dollars of gear is fixed on your back and today is not the day to push it on the trail.

At 5’8″ the pack is a good fit for me, but a bit large for my girlfriend when we shared the load on some rides. She is 5’2″ and also a photographer, but the helmet bumping and just the general size of the pack isn’t a great fit for her. Evoc does have a smaller pack, the Photop 16l, that might be a better choice.

Most photographers will find the Photo Scout to offer enough storage for them. In my arsenal is a Canon 7D MkII, a Canon 5D MkIII, and an assortment of lenses which never seems to be enough.

I didn’t have my gear with me up in Whistler, but I did have a chance to check out some gear from Canon Professional Services. It was later in the day and they didn’t have much left, so I got a monster of a 200-400mm lens, and a Canon 1DX body. The 1DX didn’t fit in the main photo compartment, but the body alone would fit in the top compartment of the bag. The lens is probably over a foot long, so there aren’t many bags the 200-400mm would fit in.

The one lens I didn’t have the opportunity to test the bag with is a 70-200mm, which is also probably the most important lens, being that it’s the mainstay sports photo lens. It appears there’s plenty room for one though, if it’s attached to the camera and not in another lens compartment.

There’s room for one body with an attached lens, an extra body, and two to three extra lenses in the photo compartment, as well as miscellaneous small accessories.

The Photo Scout isn’t an all-day media bag catch all, though, as there is no laptop sleeve, or anywhere to put a laptop for that matter. It’s really a bag for those who need to pack camera gear on a ride or outing.

Hydration is another storage issue. The pack will easily fit a water bottle in the hydration pouch, but even a two liter hydration bag is going to be scrunched. It’s best to just do the bottle, and another bottle on the bike if the bike has a water bottle cage.

This is where the bag shines. In probably less than a minute, you can be off your bike with a camera in your hand, ready to shoot. It’s as easy as setting the bike off the trail, out of the shot of course, pulling the pack off, unzipping the access compartment, or the back pouch, and pulling the camera out.

Everything else in the pack is very convenient to get to, and very easily organized with three SD card slots, a CF card slot, and lots of other little zippers and pouches. The last thing anyone will need to do with the Photo Scout is lose an arm while fishing around a big mess of a bag while looking for your remote or lens cap.

The Photo Scout makes it easy for mountain bikers to pack a DSLR on a half-day ride, along with anything else a photographer might need.

Thanks to EVOC for providing the Photo Scout camera bag for review.

Gear
The Maxxis Minion DHF Tire is Still the One to...
Gear
Never Underestimate the Power of a Good Zip-tie
Gear
Mountain Bike Tire Repair Tips: From Emergency to Semi-Permanent
Gear
These MTB Deals are Fire, including 40% off Patagonia Dirt...
Subscribe
Login
Please login to comment
3 Comments
Most Voted
Newest Oldest
Inline Feedbacks
View all comments

Thanks for bringing this bag to light. Of the bike riding camera capable bags I’ve tried, the one thing I always felt was missing is a waist strap to keep things in place. A full size DSLR and decent zoom is heavy. That strap is needed! Having never been able to find a good solution for my 6D with battery pack and 24-105mm, I’ve actually gone with a much lighter and smaller T5 that fits in the pouch of my largest hydra backpack. Going with a T5 on the trail was a compromise, but it works OK. This Evoc is worth a look! If a 1DX fits, I should be able to stuff my 6D with battery pack in there, and surly without the pack. But I must admit, crash landing on my T5 is not as worrisome as doing so on the 6D.

A 6D will definitely fit with a few lenses. The hip strap on this one is super solid! T5s are a great compact, but I’m sure there’s times you want a full-frame.