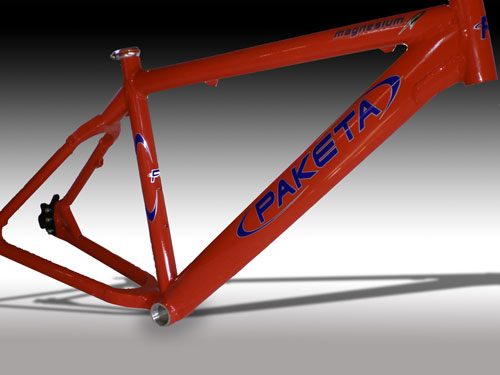 There seems to be a lot of buzz around carbon fiber mountain bike frames these days but there’s another frame material you may not be familiar with: magnesium. Yep, it turns out magnesium works pretty well for mountain bike frames and even components like saddle rails, bar ends, and brake levers. While building a MTB frame out of pure magnesium would be impractical at best and flammable at worst, most magnesium frames are made from 90-95% magnesium (more good info here). Magnesium is the lightest machineable metal and is known for its “high damping capabilities.”

Paketa makes a magnesium MTB frame called the Wac Corporal they claim is “stronger than carbon fiber and aluminum with the comfort of titanium.” Paketa also says magnesium has the highest strength to weight ratio of any frame material, a claim we find a little misleading. In truth the Wac Corporal frame weighs between 1500 and 1900 grams while a quick check of carbon frames turns up many weighing well under 1400 grams.

Most sources we found agree that magnesium frames are stiff and responsive which means it’s a great material for building XC-style racing rigs. Magnesium should also hold up better to repeated impact than say carbon fiber as it is less likely to develop fractures over time.

Pricing for magnesium frames is on par with carbon fiber, though the prices for carbon seem to be dropping as adoption increases. The Wac Carbon X.9 build is priced at $4,400 which isn’t cheap but at least it’s in the ballpark.

A little off topic, but still involving magnesium. Well, if anything they are worth some $$$$$$$. Magnesium is expensive and has a big return in scraping as much as titanium does. One thing for sure, magnesium is extremely dangerous when it reaches ignition point or when it is around excess heat like a fire. Very sensitive to water when on or around fire, so it needs a Class D extinguishing, which is for metal fires. I have fought Class D fires at metal fabricating plants and it is nothing nice to deal with these kind of fires. Most of the time water is actually an accelerate with hot metals such as magnesium, sometimes causing a real bad reaction that can be very volatile. Anyway, just my two cents!

A nice way to differentiate a frame builder, but I doubt much beyond that. Mainstream materials with the current throughput will always trounce a low volume high cost frame material.
As for mongoose’s remarks about magnesium…yes it’s an ingredient in flares and can burn in both aerobic and anaerobic (CO2) environments. But VW and Porsche engine blocks have been made of this in alloy form for years which always explained the crazy VW engine fires i guess.
If caught in a bind and needed to start a fire, I guess you could file off some of the frame to make a firestarter!!

I would have to be in a pretty bad situation to file off part of my frame for fire if I had paid that much 🙂 at this rate when are they going to make an all scandium frame. It’s light and strong (Smith and Wesson makes revolvers out of it) and should only cost as much as a cheap car….. [that was sarcasm if it wasn’t apparent]

Hey Devin, they do make all scandium frames. Not too long ago there was either a posting or blog about these scandium frames here on Singletracks, even though it was also posted in one of the major MTB magazines last year I believe. Cannot remember which magazine it was, but it was one of them anyways.