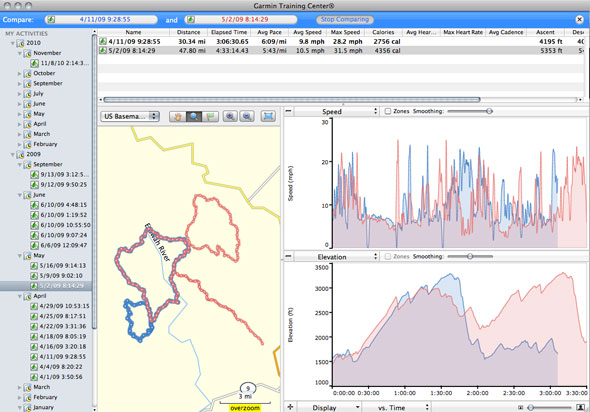 Garmin released the latest version of their free Training Center software for the Mac a few weeks ago and we have to say we’re pretty impressed so far. Some of the features we found in the Mac version aren’t even available in the PC version yet (last updated in February) – but perhaps this will serve as a preview of what’s to come. Here are some highlights mountain bikers will find useful:

Export single ride/workout: In previous versions of Garmin Training Center the only option was to export your entire history which didnt make data super portable. The latest versions (both Mac and PC) allow you to export a single ride to share in either TCX or GPX format. You can still export your entire training database – though we’re guessing you’ll rarely (if ever) want to do that.

Import GPX files: The Mac version now includes the ability to import GPX files directly into Garmin Training Center no external conversions necessary. Honestly its about time the GPX standard has been around for years and is the most widely adopted format for sharing GPS data. Unfortunately the PC version can only import TCX data for now (though as mentioned above you can export courses in GPX format).

Ride comparisons: The comparison feature included in the latest Mac version takes Garmin Training Center to the next level as a fitness training tool. The software allows you to select two rides and compare them side to side speed, elevation, etc. This is perfect for comparing your performance on a regular course or even seeing how two different trails stack up against one another. 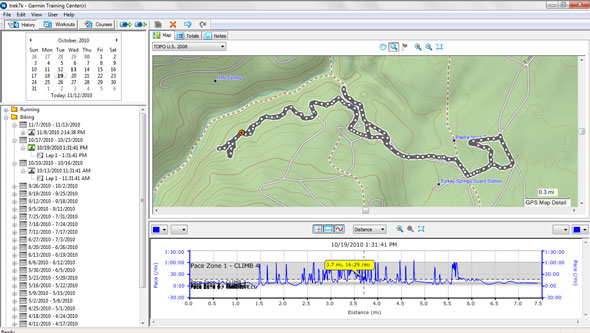 Smoother looking graphs: Both the PC and Mac versions of Garmin Training Center have always looked a little clunky but the newest Mac version is definitely more Mac-like. You can even use built in-tools to smooth the displayed graphs to remove spikes caused by bad data. The PC version, on the other hand, still features chunky graphs.

If you use a Garmin Edge or Forerunner for mountain biking, make sure youre running the latest version of Garmin Training Center to get the most out of these new features. Sharing and loading GPS data for mountain bike trails has never been so easy!

Looking forward to trying this program out. Got a Garmin 60CSx and was wanting something to compare my regular rides to so I can see where I might be able to make a faster time.