In this post I’ll try to round up everything mentioned in the title… plus more fat bike stuff. While Frostbike may not be as big as Sea Otter or Interbike, there was plenty of exciting new stuff to see. 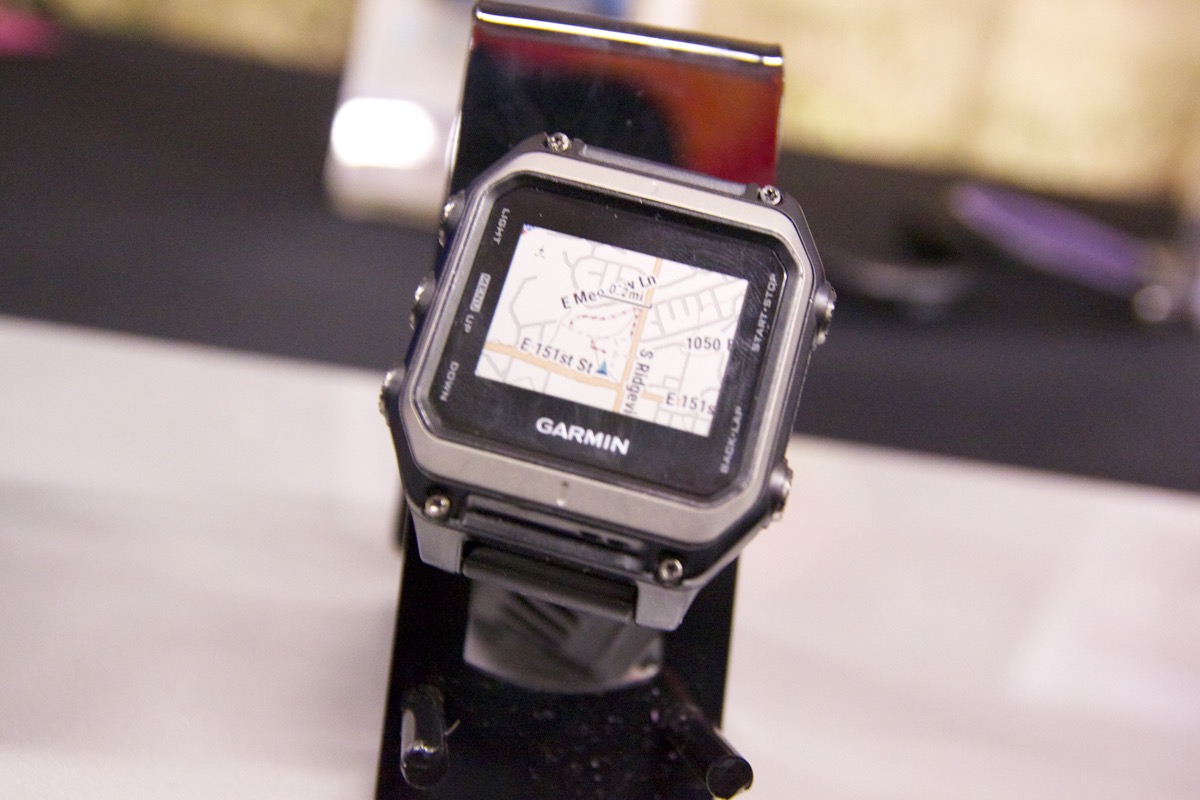 I tested and reviewed the Garmin Fenix 2 wristwatch and I found it to be super solid on the trail. Garmin’s latest wearable for mountain bikers (and other adventurers too) is called the epix and not only does it pack a color screen and detailed topo maps from Open Street Map, it also has GLONASS capabilities for improved accuracy. Note, in the photo above you can see a dotted red line that represents a trail. 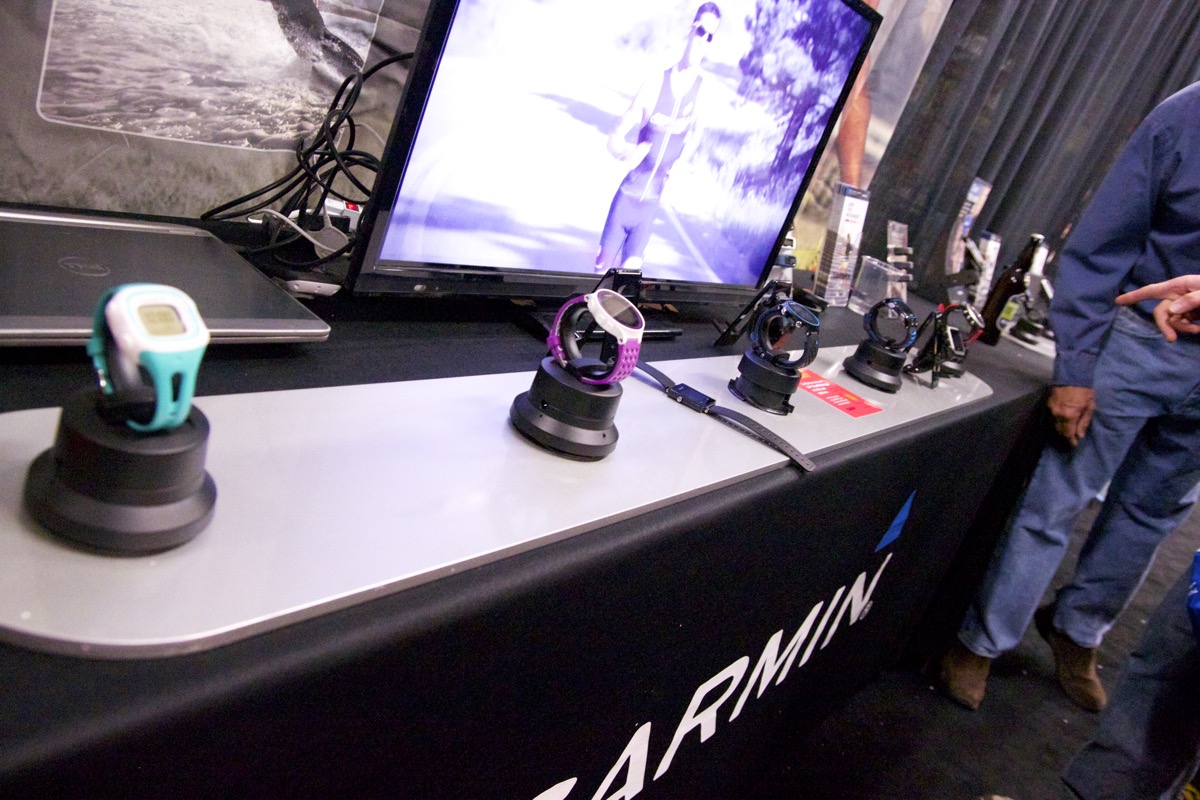 Garmin continues to expand their wristwatch line and at least one of the latest models features an app store where consumers can get third-party apps for their Garmin watches. 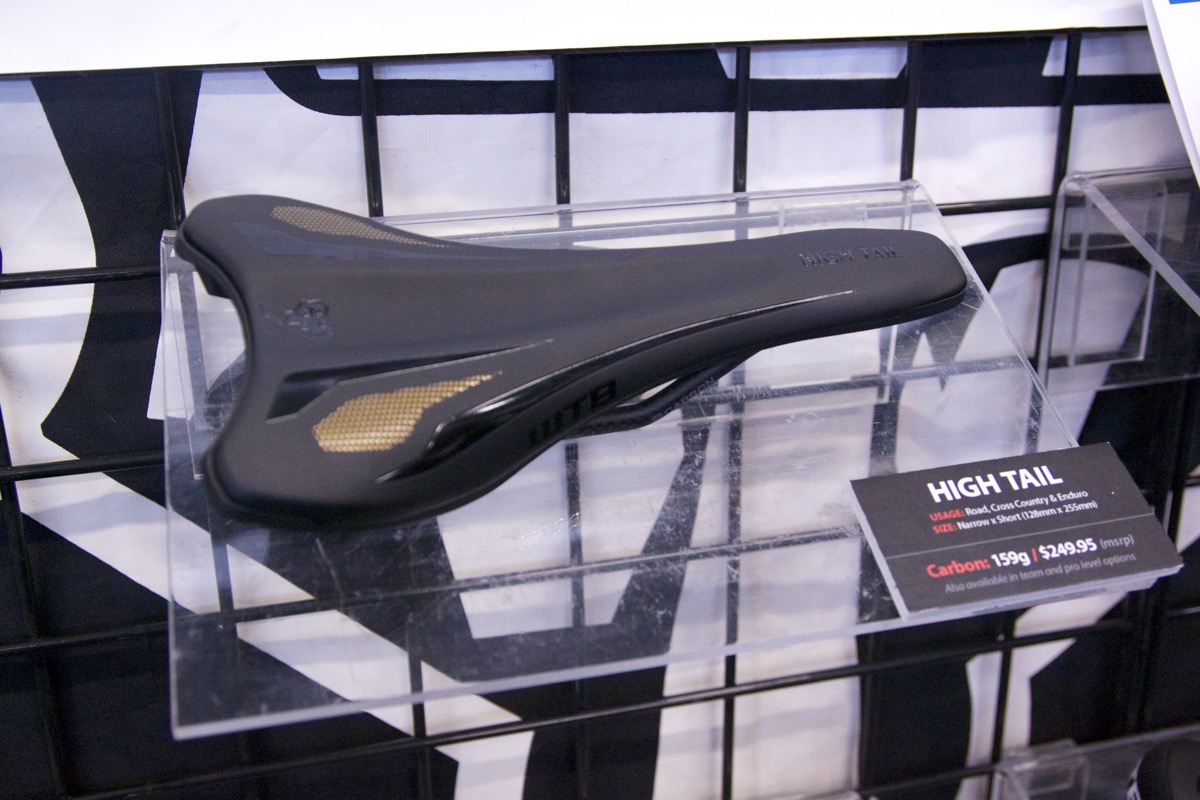 The WTB High Tail was developed after the folks from Pivot bikes asked WTB for a saddle that wouldn’t get buzzed by tires on long travel bikes. The resulting shape features a cutout for tire clearance but there’s a lot more to this saddle than just a cookie monster-sized bite out of the back.

The construction eschews the traditional stitching and staples for a really sleek look and feel, plus this thing is light–just 159g. Hold one of these in your hands and it’s not like any other saddle you’ve felt or seen. 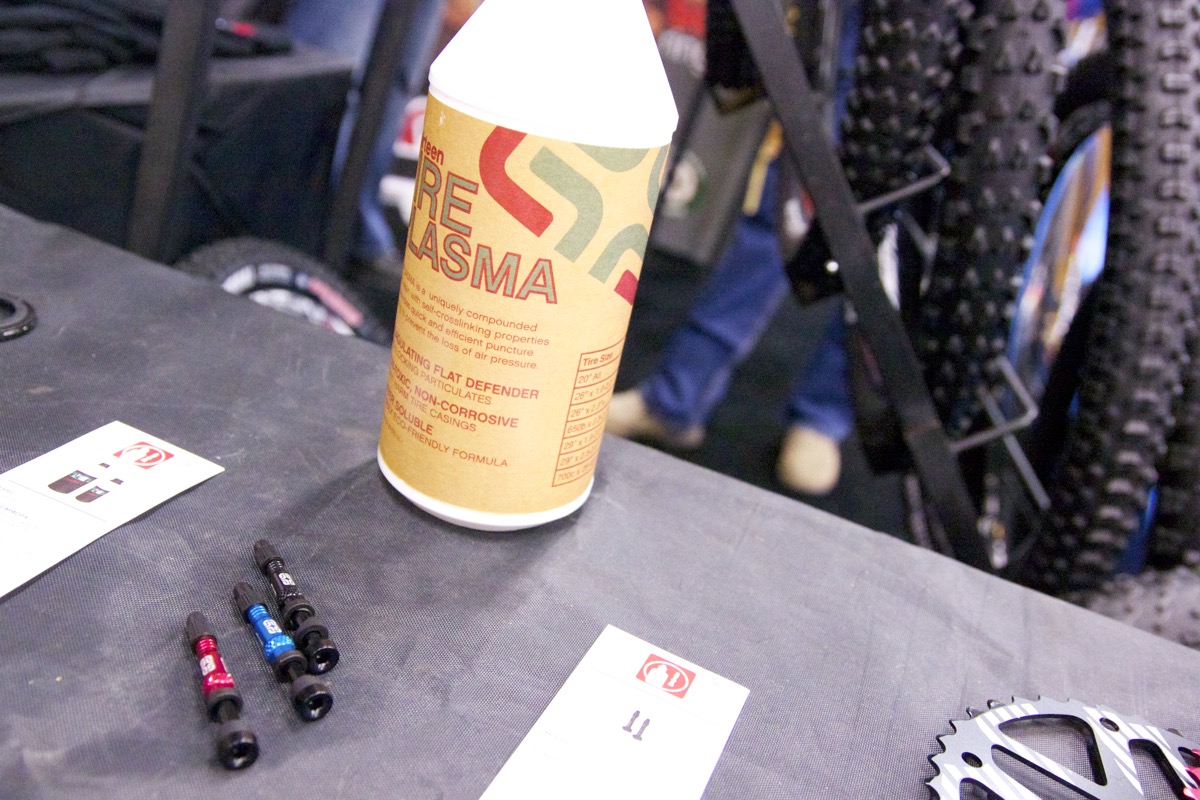 E*thirteen has an updated version of the LG1, which features a new material on the guides for improved durability. The company is also selling its own tubeless tire sealant that’s non-toxic and non-corrosive for a more eco-friendly alternative. Not only that, E*thirteen has a new valve design to make using tubeless tires even easier. 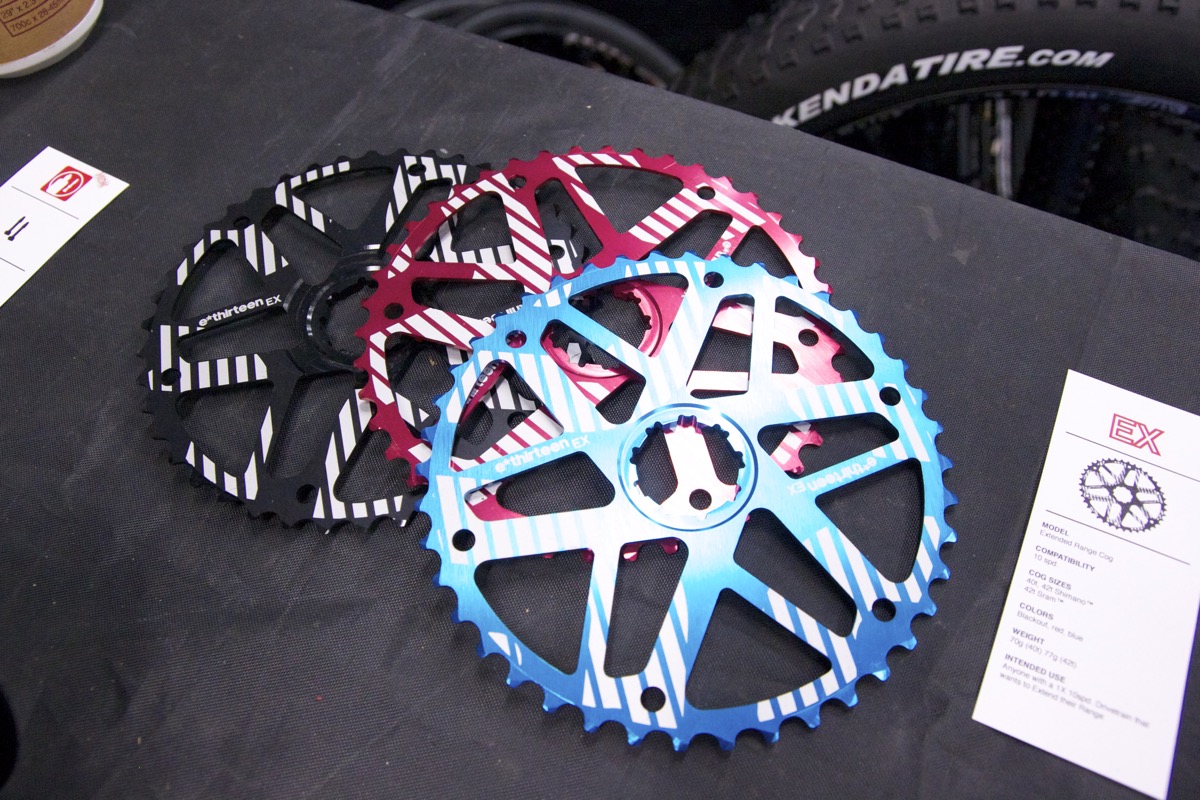 The EX extended range cog from E*thirteen is designed for riders looking for a bit more range out of their 1×10 drivetrains. The company offers three different sizes: 40t and 42t for Shimano-style hubs and a 40t for SRAM-style. Not only that, you can get the ring in either black, red, or blue. Look for availability around late May of this year and expect pricing to be around $60.

QBP had their History of Fat exhibit on display at Frostbike along with a prototype full-suspension fat bike the company worked on leading up to the release of the Salsa Bucksaw. The bike was basically a mash-up of the Mukluk (fat bike) and the Spearfish (FS) and is lovingly referred to as the Muck-fish. 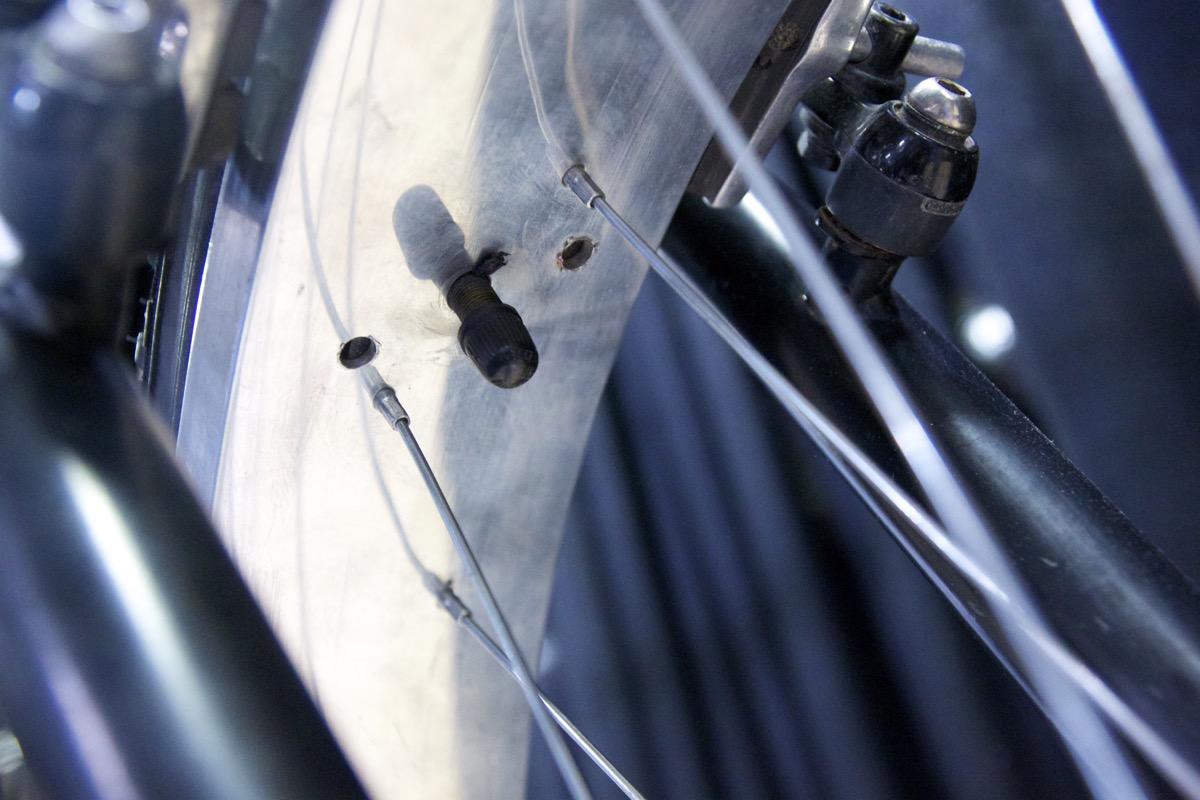 I also found it interesting to learn that some of the first fat bikes built by hobbyists featured three valve holes so riders could mount two standard tubes side-by-side if they didn’t have a proper fat bike tube handy. Now that’s ingenuity! Good trick for those who are fat bike touring and find themselves in a pinch (pun intended.) 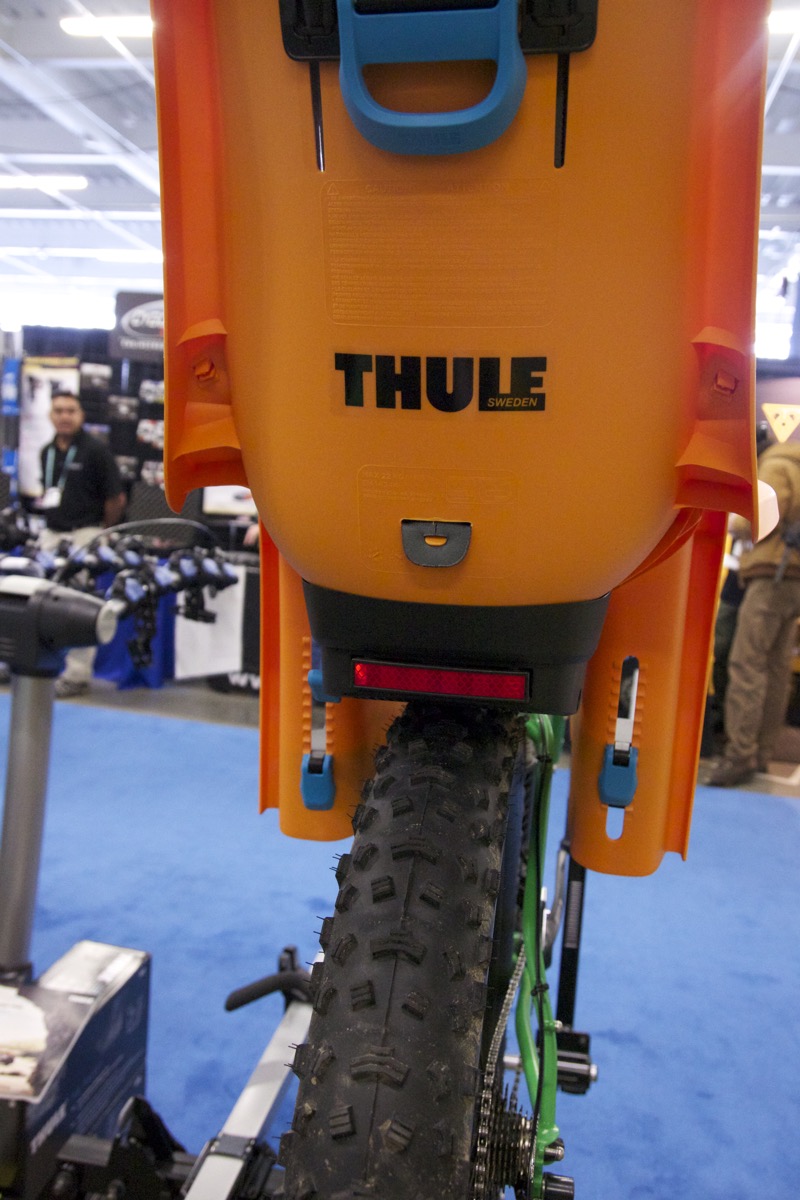 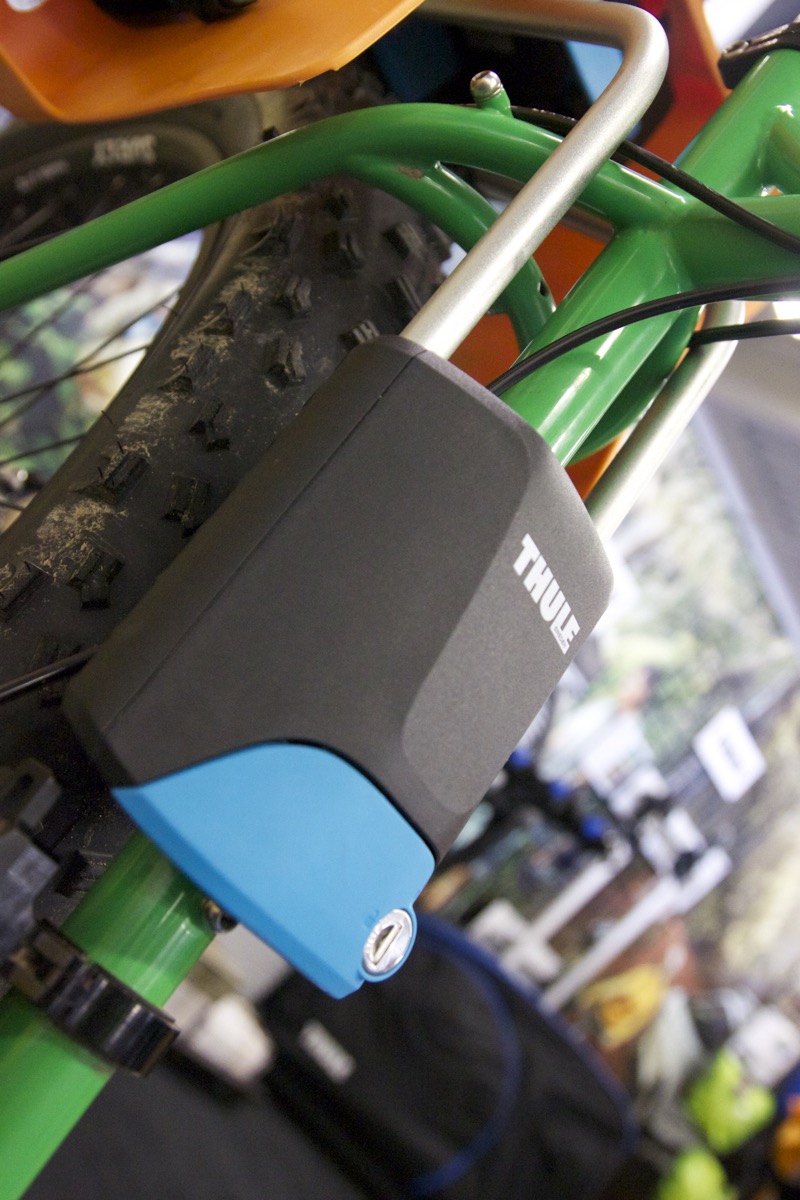 Looking for a rear child’s seat that will clear your massive fat bike tires? Thule has a solution. I didn’t get the details about this seat but I’m guessing it isn’t cheap based on the fact that it locks to your bike’s frame with a key.

It seems like fat bike rim choices are exploding, and at Frostbike alone I found wide rims from WTB, DT Swiss, Industry Nine, and Sun Ringlé, just to name a few.

There was much to see at Frostbike, which has me even more stoked to see what Greg and Aaron find at Sea Otter in just a couple months. Stay tuned!