Big bike companies like Specialized and Trek have marketing departments dedicated to finding out what bike innovations they can sell, and sell lots of, to you, the mountain bike customer.  Small, boutique  bike builders have very small staffs and the President/CEO/Owner usually is the marketing department.  These small staffs/individuals are often too busy just trying to keep the shop going to focus on marketing, assuming they are even marketers by education or experience to begin with.  They often come up with a new bike based on “what do I think would be fun to ride.”  On rare occasions, they may get suggestions from customers.  This latter path is the one which led Foes to create the Mutz. 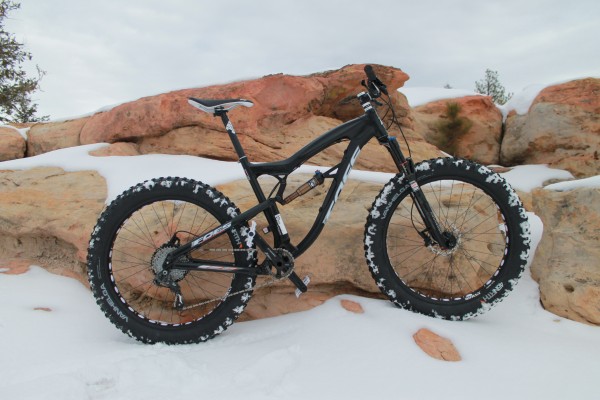 Mike Vidovich, owner of Timberline Cycles in Colorado Springs, was quick to note how much fun fat bikes are even in dry terrain.  Well, if you’re not just limited to snow and the beach, why not go ahead and make a full suspension fat bike?  The combination of the benefits of full suspension and the benefits of big tires might make for an all new kind of ride.  So Mike got in touch with each of the handful of boutique bike brands he carries and suggested they make a full suspension fat bike. After much cajoling and prodding, Foes became the first to bite.  Foes needed an appropriate build kit, but Timberline was cranking out fat bike builds at such a rate that they couldn’t spare one. That’s when Likin’ Bikin’ in Alton, New Hampshire jumped in and shipped a build kit.  With the last piece in place, Foes began to fab what they hoped would be a fabulous new ride, the Mutz.

For more information on the creation of this bike, please read this article. 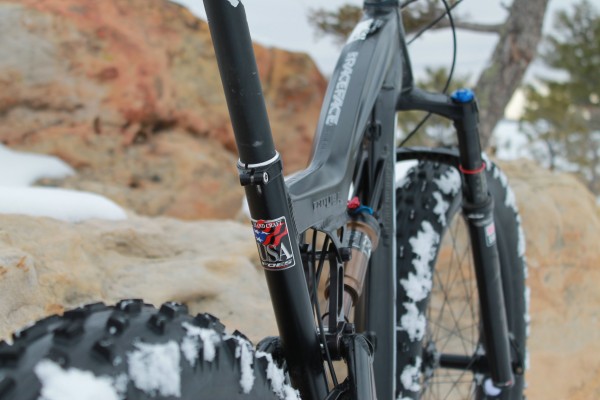 The Mutz is one of a few full suspension fat bikes available today.  The frame allows for 120-140mm of rear suspension in a highly evolved single pivot layout.  Foes put great effort into matching the best possible leverage rate with pivot point placements to provide the best possible suspension performance, all while keeping the design simple.  The Mutz is fitted with the usual RockShox Bluto fork for 120mm of suspension up front.  The bike will comfortably accept any tire up to a 4.0″, and some which measure a bit larger depending on the specific design. 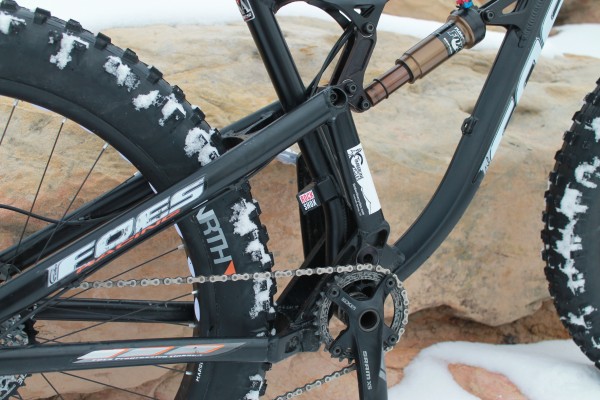 Foes is most famous for the rock solid sturdiness of their bikes.  Pick any category in which Foes has an offering, and it won’t be the lightest frame out there, but it will almost certainly be the most durable.  Foes does not build bikes for gram counters, they build bike for people who ride–hard.  The frame is welded out of Foes’ usual hydroformed 6061 aluminum, which has proven that it can to take tons of abuse for years on end.  One look at the beefy welds on the Mutz and it becomes obvious that the Mutz is still a Foes through and through. 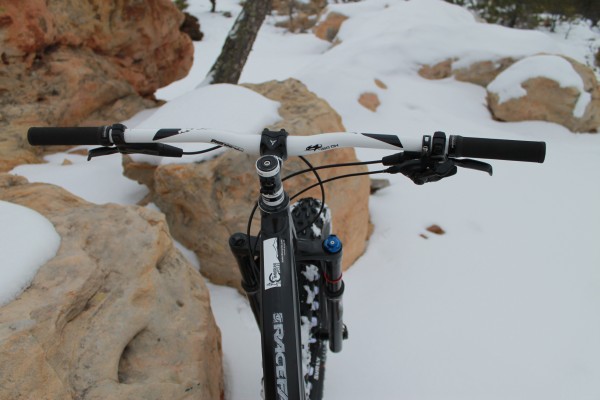 Mike wouldn’t have made his proposal to Foes if he wasn’t confident he could move product.  For a small company like Foes, tooling up to produce a new bike represents a significant investment and some volume must be achieved to recover that investment.  In addition to making a great product, you’ve got to be able to put it on the floor at a competitive price.  Timberline Cycles has carved out a great niche by taking high end, American-made frames and combining them with cost effective builds, and they approached the Mutz with the same philosophy.  Their build kit comes with a mix of big name parts and lesser-known but equally high-performing substitutes.  They would not hang parts on the bike that weren’t actually worthy of the frame.   Given the aggressive nature of this bike, the frame is properly fitted with additional cable routing for a dropper post. 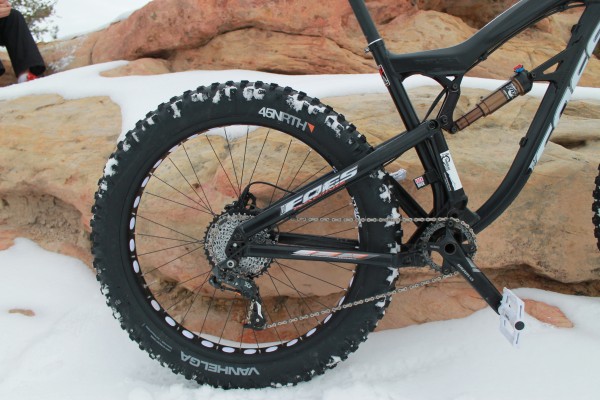 The drivetrain is largely SRAM X5, but the 9 speed cogset has been mated to a Oneup 42=tooth large cog to create a 1×10 with a true granny gear. This build fitted the Mutz with a Surly Marge Lite wheelset, which had been converted to tubeless.  Timberline’s standard build gives the buyer a choice of tires, from Kenda or Vee Rubber.  The one significant upgrade my demo bike came with, however was a set of VanHelgas from 45North.   These had larger, more widely-spaced knobs which I looked forward to sinking into the snow to assess their performance.  Stopping power was provided by Avid Elixir brakes, but parts availability has since driven this component to the SRAM DB5. 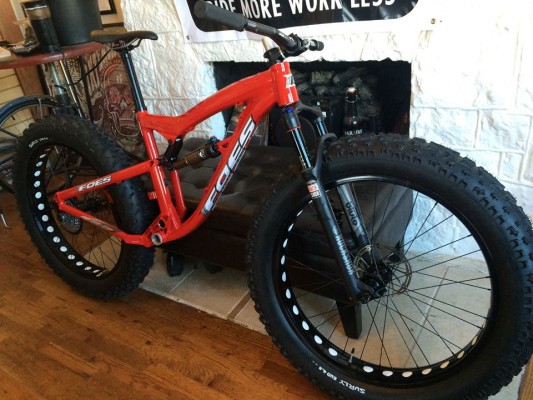 In the end, Timberline was able to put together a build of comparable quality which brings in the Mutz at a retail of $3,999 (matching the entry level Salsa Bucksaw) and a weight just under 33.8 lbs (large frame), again in line with the Bucksaw.  In giving up a couple components with greater name recognition, the Mutz compensates with  a genuine Made in America frame and Foes’ unmatched reputation for sturdiness and durability.

One of the drawbacks manufacturers initially saw with full suspension fat bikes is performance in extremely cold weather, which is part of why the first generation of fat bikes were all fully rigid.  However, with fat bikes becoming year-round toys, full suspension is no longer off the table.  But just because a full suspension fat bike may be fun in the summer doesn’t mean it should also have to spend winter in the garage.  Before sending any Mutz out the door, Timberline performs additional maintenance on moving parts to ensure continued performance even when the mercury plummets. 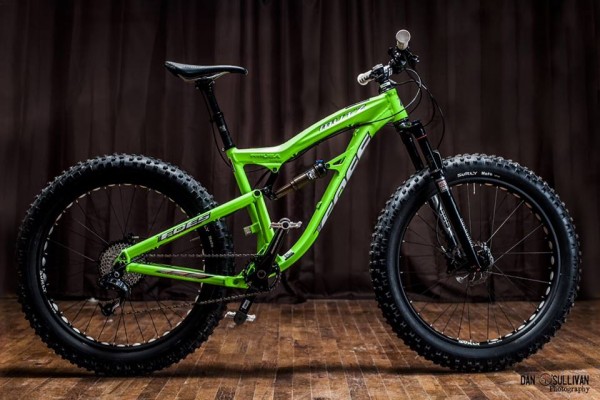 It’s not often one gets a chance to be one of the first to throw a leg over an all-new, and potentially revolutionary, ride.  When Mike gave me a call and asked if I was interested in just such an opportunity with the Mutz, to say I was stoked would be a huge understatement.   Of course, new doesn’t always mean good, and more than once I have been disappointed by the greatest new bike on the market, so I tried to keep my expectations in check while waiting for Timberline to build up a Mutz for me to thrash.

So how did it ride?  Stay tuned for the final review!

So stoked to hear how this bike performs! Hopefully you got a chance to ride this bike in the dry–I bet it absolutely rails.

I’m totally stoked by this trend of FS fat bikes!

Dude, this bike looks sweet!! If there’s one type of bike I could add to my stable right now, it’d be an FS fat bike, hands-down.

Can’t wait to read more of your thoughts on this rig!

Great looking bike and an awesome story behind it too.

I couldn’t agree more Greg. If I was able to get another bike it would definitely be a FS fat bike. Unfortunately, neither the bank nor the wife will hear it! 😆

Wow. This bike is awesome. Can’t wait to ride the Foes Vidovich when it comes out.

After riding Chris’s (and others) on snowy multiuse trails and being blown away, I am saving for a Foes Mike-ahem-Foes Mutz. I know everyone says it’s great on dry trails (I’d still prefer a 23# dw-link 29er)…we’ll maybe in certain conditions , but IMHO it is the only absolutely ideal NE winter bike. It will take 5 inch tires, and keeps them firm to the surface. I find real winter trails frequently have indentations, footprints, grooves, washboards from snomos, etc …after all why else would snowmobiles have longer and longer suspensions if snow trails were always smooth? Can run tire pressure a liitle higher on firm terrain (winter or summer) to better without unwanted bounciness, since the shock dampens the motion, too. Freaky plush and somehow pedals decent for a single pivot. Kinda plain stock paint jobs and stickers?! for such a finelyrics built and pricey frame, but you do get option to customize.