I never did go to my high school prom but if I did, I would have been voted most likely to break a bone. Yep, I was walking around Interbike last week with a freshly broken clavicle thanks to a nasty crash landing on my head and shoulder a couple days earlier. The very fact that I am alive and can speak in complete sentences is a tribute to great safety gear design.

One thing that never seems to get old is the amazing progression of safety gear design as it becomes more effective, lighter, and more comfortable. This year is no different with some new innovative changes in how manufacturers think about their lids and safety gear. 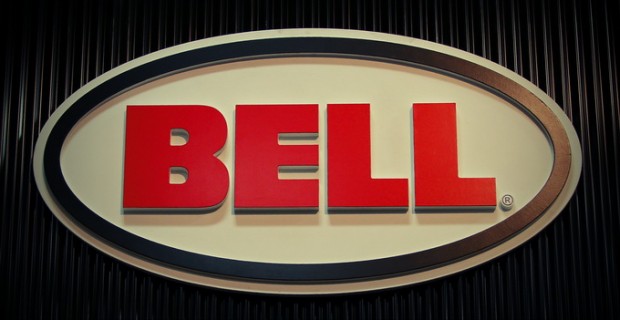 Bell was out in full force showing off their new lids at Interbike with safety clearly taking the front seat. A few weeks ago both Bell and Giro announced the inclusion of MIPS and ICEdot in selected top-end lids, both of which improve the chance of walking away from a crash without serious head injury.

MIPS can be found in versions of the Super 2, Super 2R, and Stoker helmets on the MTB side. Additional MIPS lids are on the horizon.

The big talk of the show was of course the Super 2R that was released just a few weeks back at Eurobike. Just to clarify for those who aren’t sure: the Super 2R is not a true full face helmet.

Yes, the Super 2R does have the removable chin bar and yes, it does offer some protection. But it was not fully tested to ASTM F1952-00 / F2032-06 standards. Just think of the Super 2R as an intermediate lid between full face and open face. It offers some protection over frontal fall abrasion but not to the extent of a full face lid. Without using the “E” word, this is meant to be a lid that suits that type of event without the huge weight penalty.

A mix of bright colors and shades of grey seemed to be this year’s theme at Bell. I do have to admit the bright infrared color is eye-catching–hopefully that will keep cars away when we’re not on the trail. 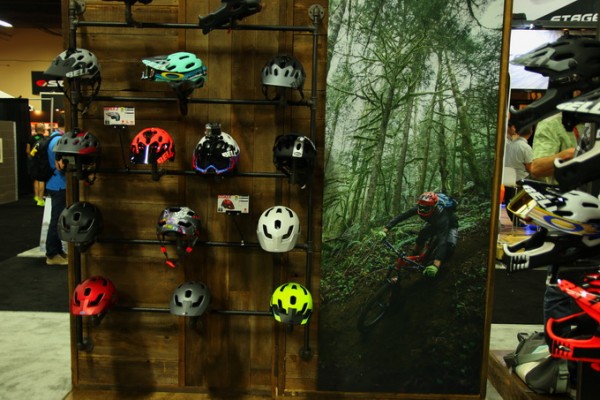 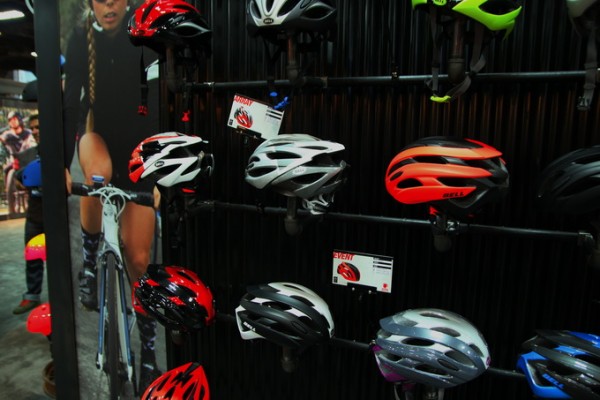 Bell even showed off kids’ lids. With a complete line of cool-looking helmets for kids and those of us who are still kids at heart, these helmets are perfect for the BMX or Dirt jumper in all of us. 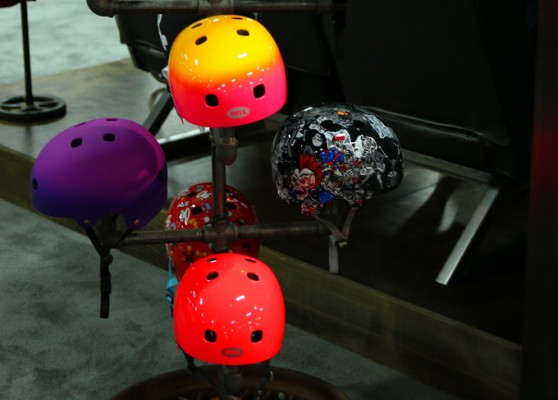 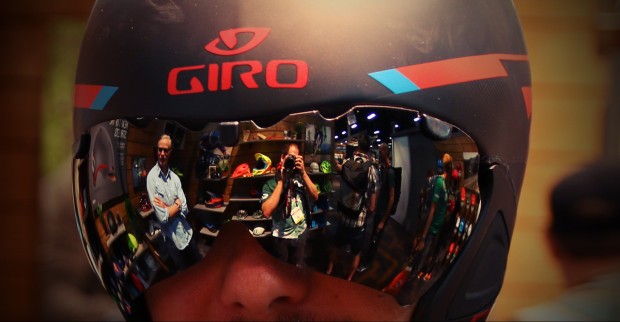 At the Giro booth it was new tech and colors all the way. Talking with Mark from Giro, we learned about the huge investment the company has made in MIPS tech with the Feature and Feather helmets as their first MTB lids to utilize this potentially life-saving tech. 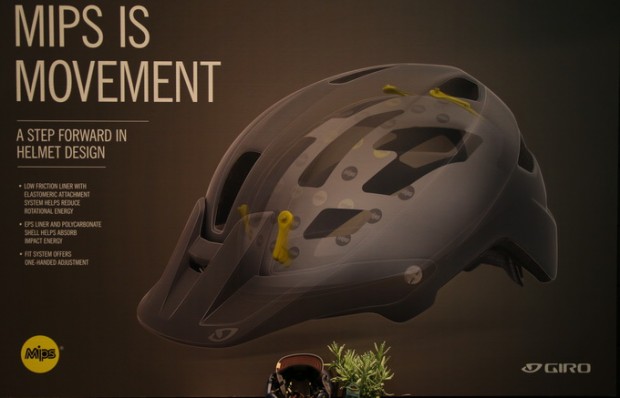 Giro was also keen on showing off their new colorways and styles including simple patterns, camo, and solid colors. 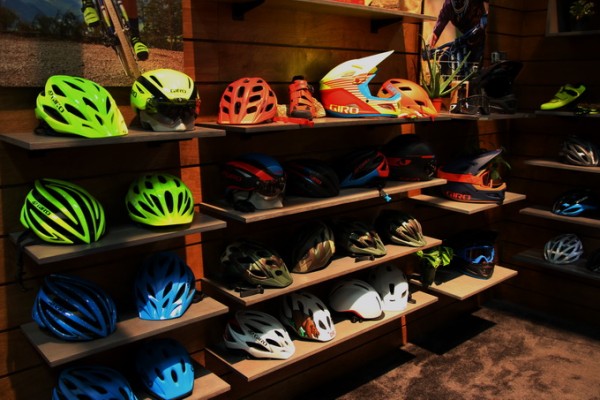 Kids have a great choice on some fun colors as well. 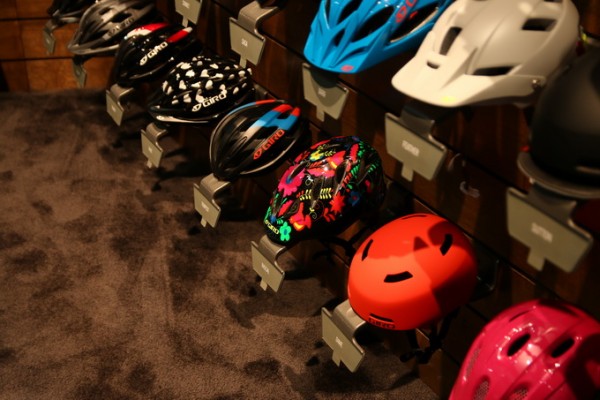 Greg and I were all over the Enduro action, looking for products to improve our speed on the trails and tried on the Selector and Air Attack lids. Mark: “Aren’t you a little short for a Stormtrooper?” 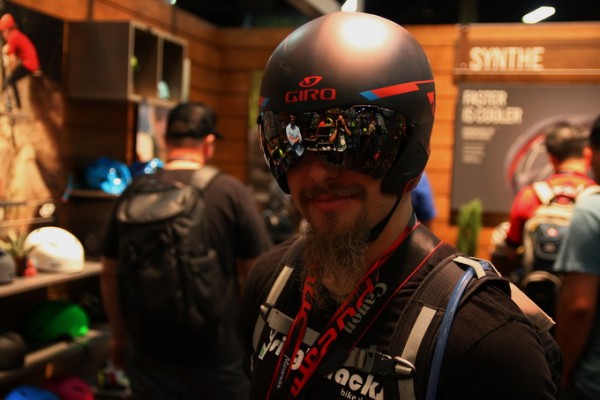 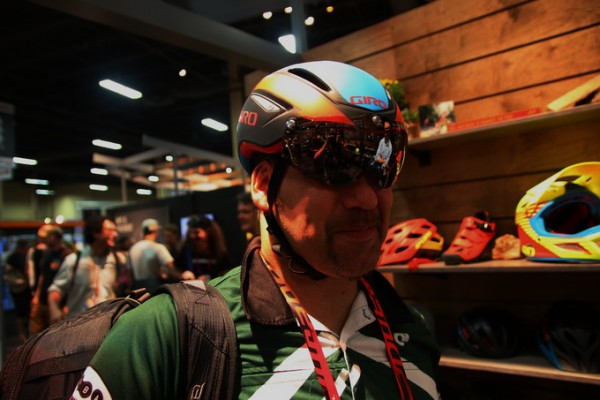 But the whole story isn’t just about helmets: Giro had their clothing and shoe lines on display as well. Most Giro shoes are using a molded vibram outsole, and depending on the model, a carbon footbed or a shank of sorts. 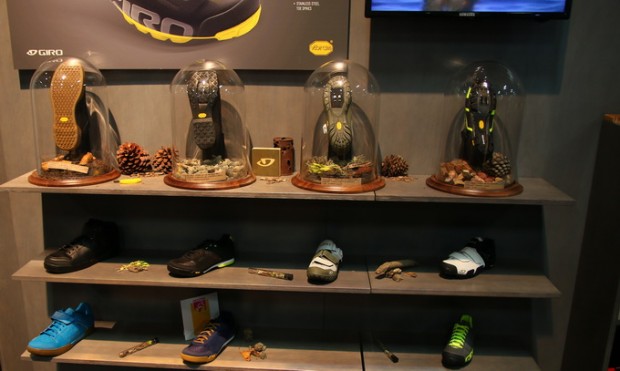 The Empire MTB XC shoe was something pretty awesome to behold. Using an EC90 carbon outsole and a Vibram molded tread pattern for extra traction, these shoes felt like there was nothing there at all. 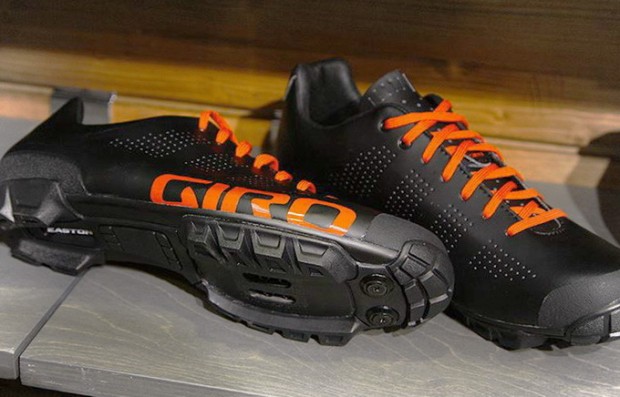 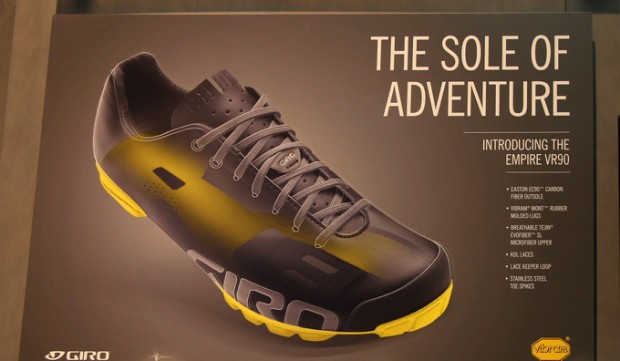 Kali was at the show displaying its newest in headwear. The Maya (shown below) is the company’s latest creation.

Weighing in at 300g, this helmet is made for the enduro slash all-mountain crowd. At $99.99 MSRP, the Maya uses Composite Fusion Plus technology to maximize safety and impact deceleration with the most compressive foam possible. A venturi design vents this helmet fore and aft and a GoPro mount comes standard. 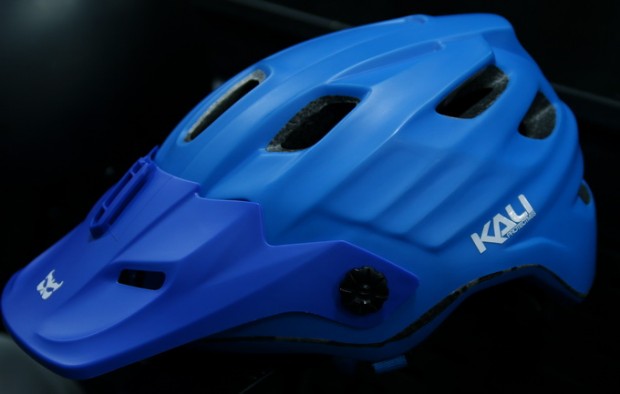 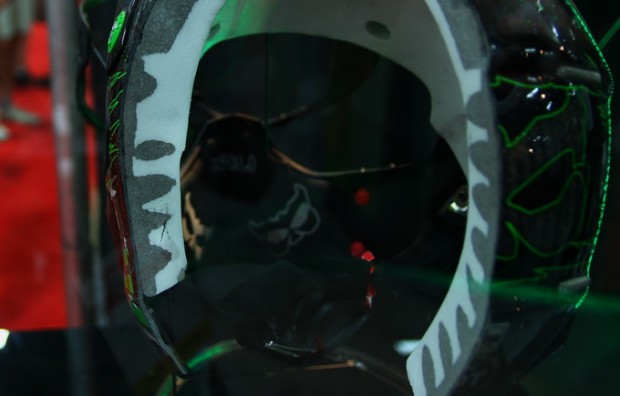 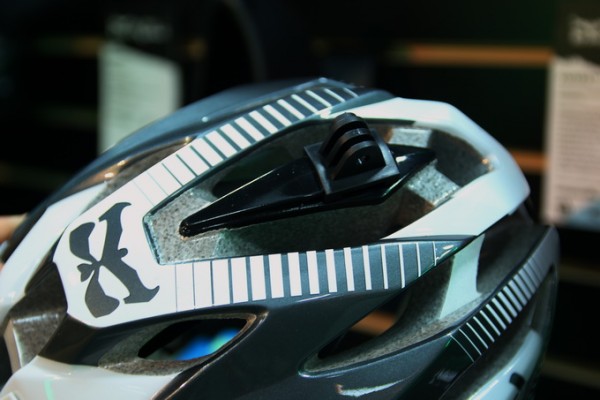 Kali also introduced production-ready models of their top model DH lid, the Shiva. The big significance here is that this lid is DOT approved. With an in-mold design, Kali is able to reduce the size of the helmet compared to regular DOT-approved lids without sacrificing safety. 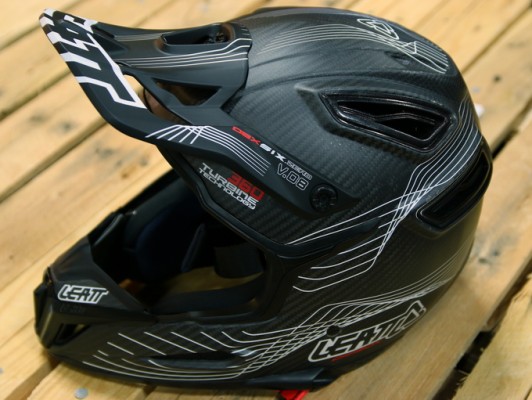 Ask anyone on the Singletracks editorial staff and they’ll tell you that safety is my top priority on the bike. Of course my second priority is lightweight gear and Leatt sees things the same way. From day one, Leatt has continued to improve their gear in an effort to provide gear to protect riders out on the trail. 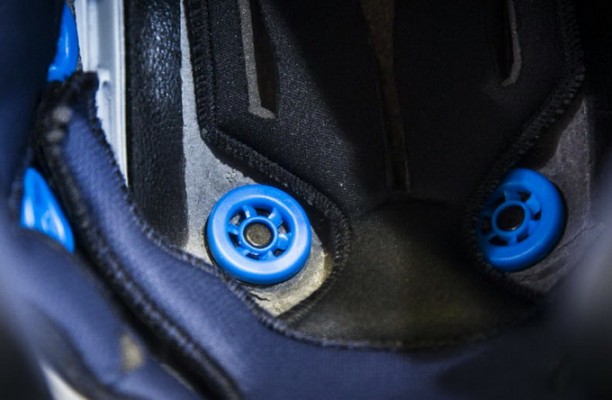 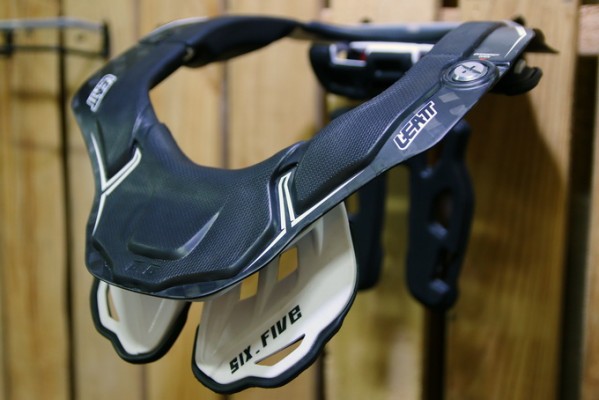 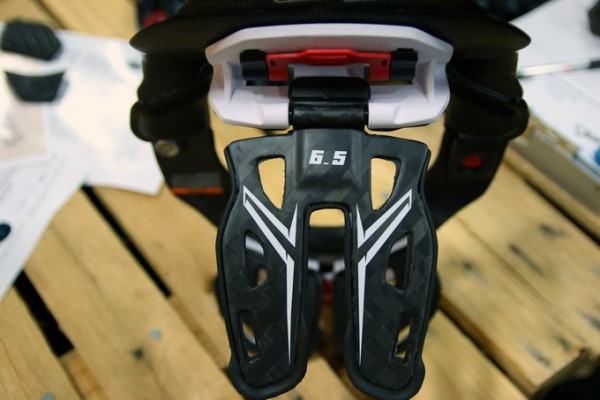 A three-way, adjustable, and folding Thoracic support gives this brace a comfortable fit as well. 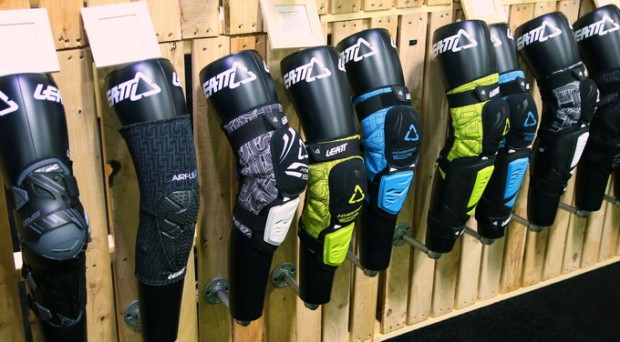 Redesigned soft and hard armor of varying degrees makes for a chorus line of gear from hard-hinged armor all the way to soft. New hybrid armor combines the fit and feel of soft 3DF armor with strategically-placed hard armor points 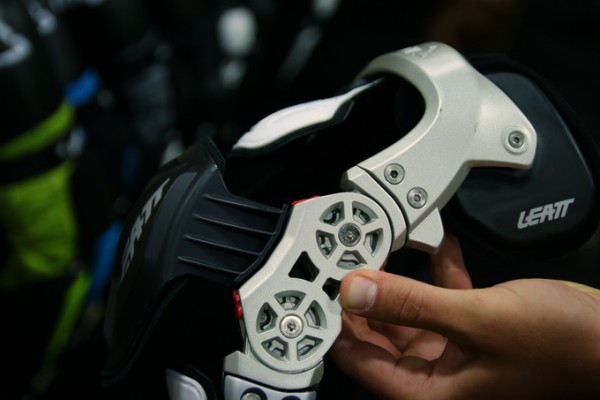 For those of you who, like myself, have torn up your knees over the years, the new Robocop-like knee brace is something to behold. Using a geared pivot, and fully adjustable upper and lower support points, this is a must have.

What I didn’t manage to get shots of due to my crazy schedule at Interbike was the new line up of cool-looking hydration solutions from Leatt. For now, you can check that stuff out at Leatt’s website.