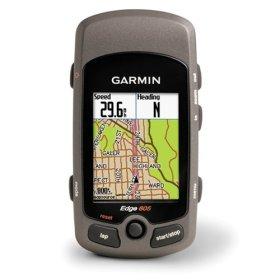 I’ve been using an Edge 605 GPS on loan from Garmin for the past couple weeks and I’m finally ready to share my review. For my tests I took the 605 on the trails at Yellow River, Tribble Mill, and Big Creek, the mean roads of East Decatur and Stone Mountain, and dizzying loops through the neighborhood. It’s a good thing I was able to get in so many rides – the Edge 605 actually has a steep learning curve.

The latest Edge series GPS units from Garmin were created to add a critical feature missing in the original Edge units: decent mapping. The Edge 605 includes a brilliant color screen that is easy to read in virtually any light conditions from mid-day sun to pitch dark night. The included basemaps may be a draw for some but beware: the included maps are woefully inadequate even for road riders (and even more worthless to mountain bikers). If you want to use the Edge 605 to view topographic or even detailed street maps you’ll need to add a microSD memory card plus a $100 (each) mapping software package from Garmin.

I found the maps difficult to focus on while riding, particularly on the mountain bike trail. Even harder is picking out your skinny dotted breadcrumb trail on the map, even when you stop to rest! I found myself staring at the GPS like Mr. Magoo at trail intersections, trying to figure out if I had been there already. The GPSMap 60Cx at least lets you choose a color for your breadcrumb trail to make it stand out on the map more – perhaps Gamin will add this feature to the 605 as a software update.

Garmin is slowly but surely making it easier for regular folks to download trail information online and load it onto their GPS before heading out to the trail but the process still hasn’t been perfected. When you connect the Edge 605, your computer automatically recognizes the GPS unit’s internal memory as a flash drive (even on your Mac!). Just navigate to the Garmin/GPX folder and plop that .GPX trail file on the device. Done. You can also check in the History folder to find your latest rides saved in individual .TCX files, perfect for importing into Garmin Training Center or posting online.

I was a bit surprised, however, to find that the Edge 605 doesn’t come with any software out of the box. It seems like Garmin wants you to use the free but extremely limited Training Center software or one of their (paid) websites like MotionBased. For mapping and loading trails I really prefer MapSource but like I mentioned earlier, it doesn’t come cheaply. I’m waiting for the day when GPS software is as easy to use as iTunes – just drag and drop your tracks from your trail library to your GPS. Anyone listening out there?

One of the coolest things about the Edge 605 and 705 is the ability to follow routes created by others. Once you’ve loaded a GPX file onto your device, it’s simple to build a route based on the data. So, for example, if you’re riding the local trail and following a track you downloaded from singletacks, the GPS will begin directing you as you approach the next turn. Though it won’t talk to you like TomTom, two sharp beeps alert you while the screen shows the time-until-turn and a blown up map of the turn or intersection. Unfortunately the on-screen instructions are a bit hard to understand, especially bombing down a hill, when they say go “South” or “South-west” instead of a simple left or right. Fortunately the on screen graphics help clear up any confusion.

Of course the Edge 605 can do most of the things regular GPS units can do like keep track of distance traveled, speed, time, etc. but curiously some pretty important features were left out. For example, the Edge 605 doesn’t include a graphical elevation plot and can’t even give you a running tally of total climb/descent on the trail–unacceptable in my opinion. The Edge 605 does actually track these things and you can view them at home on your computer, so why isn’t this visible on the device?

The Edge 605 uses the same solid, sleek mounting system as the Edge 205 and 305 GPS units which means it will stay on your bike even on the roughest trails. The unit itself is a bit larger than the Edge 305 but it’s still quite small and a huge improvement over the GPSMap 60C in terms of size and usability on the bike. Satellite reception was good, though it seemed a bit slower to acquire and hold a signal than my trusty Edge 305.

If you’re confused about operating your Edge 605, I must warn you that the official online documentation is a joke. As I mentioned this GPS has a steep learning curve, even for a geek like me who has owned 9 different GPS models over the past 7 years. The owner’s manual is painfully basic and probably covers less than half the features included on the Edge 605.

Overall I have to give the Edge 605 a check minus. Sure, it’s a good first stab at creating a cycling-specific color screen GPS but it falls short in so many areas, particularly when it comes to mountain biking. In terms of price the Edge 605 is out of reach for most casual riders starting at just under $400 for the GPS without any maps or memory cards. Based on the price and current feature set I’d only recommend the Edge 605 to early adopters – you know, those guys who lined up to get the first iPhone, only to see the prices drop and performance improve just a few months later. If you need a GPS for biking right now, you still can’t do any better than the Edge 305 in my opinion.