Niner is breaking down barriers and defying conventions with their new WFO 9, as I’m sure you can tell just from my tech-focused On Review article. However, I’m sure what you’re really wondering is: “how does it actually ride, out on the trail?”

As the burliest, most aggressive bike in Niner’s lineup, and one of the longest-travel 29ers in production, I knew that I would have to push myself to the limits if I wanted to even come close to seeing what this bike is capable of. Unfortunately, this late in the season, I couldn’t hit any of the high-alpine shuttles such as Monarch Crest, but don’t worry–I wasn’t out of luck just yet! I chose my point of relocation well, (check out The Top 10 Reasons NOT to Move to Salida) so I had plenty of arid trails filled with burly rock obstacles to test the WFO 9 on.

Over the course of my test, I rode hundreds of miles of technical singletrack, including the gnarly Uncle Nazty and Sand Dunes trails in the Arkansas Hills Trail System, some of the most challenging trails Hartman Rocks has to offer, and some ridiculously technical terrain at Palmer Park.

After spending some serious time riding the Niner WFO 9, I’ve decided that if anyone buys one of these bikes, they’re officially cheating at mountain biking. Rocks, drops, and jumps aren’t supposed to be this easy. They’re supposed to be intimidating and scary, but aboard the WFO 9, they just aren’t.

29er wheels are renowned for their rollover abilities, and in challenging terrain it’s no different. While many people cling to their 26-inch wheels for long-travel bikes or are jumping on the new 650b/27.5 band wagon, I found the massive rollability of the 29er wheels allowed me to simply forget about the smaller rocks and the gullies and trenches between rocks that might swallow a wheel of a smaller diameter, and focus on the major line choices and the really big, technical moves.

Some people claim that 29ers aren’t agile enough to ride in tight, technical terrain, and that the wheels are too sluggish. After having ridden 26in, 27.5in, and 29in-wheeled all mountain bikes over the past few months, I have come to the conclusion that if you can’t handle a 29er AM bike in tight, technical terrain, then you’re just riding wrong.

Ok, I’ll grant you that smaller wheels are more maneuverable, allowing the rider to maneuver around obstacles, swing around switchbacks easily, and flick in the air a little more. I rode the WFO 9 in wide-open tech terrain and tight, twisty tech terrain, and I found that riding the tighter trails simply required a different mentality. No, you can’t navigate around some of the big rocks like you can on a smaller-wheeled bike. Instead, you have to plough straight over everything.

The WFO 9 has allowed me to straighten out the gnarly lines. Sure, I can’t avoid that big boulder by swinging through a narrow gully like I can on my 26er. Instead, I pick up the speed, point the front tire straight down the trail, and charge straight up and over that dang boulder! You know what the added bonus of riding straighter, more aggressive lines is? Less braking, and more speed. That’s what’s up.

Don’t get me wrong, the WFO 9 is reasonably agile and maneuverable. However, I’ve found that the bike truly excels when you point it straight and ramrod right up, over, and down anything that might be stupid enough to get in your way.

Niner claims that they’ve “shoved the WFO 9 off the ‘all-mountain’ fence firmly into gravity territory.” However, I must respectfully disagree.

Let me be clear: there is no doubt in my mind that the WFO 9 could kill shuttle runs and chairlift laps all day without breaking a sweat. However, do you recall the weight I mentioned in my On Review article? In case you don’t, let me refresh your memory: 29.59 pounds stock, with my cheap SPD pedals mounted on it.

Now hold the buggy for just a second. This is a sub-30-pound alloy 29er with over 6 inches of suspension travel. My hardtail 29er (granted, it costs about 1/4 of the price of the WFO 9) weighs almost that much, and my 2007 5.5in 26er trail bike (again, about 1/4 the cost) tips the scales at 3 pounds more. So, for all intents and purposes, this big, burly bike weighs the same or less than all of the bikes I own.

For comparison to more modern bikes, check out this comment from my On Review article:

For comparison, I tested a 120mm-travel alloy 29er this summer that weighed in at 32.47lbs as tested with pedals and seatpost. Granted, it would have retailed for about $700 less than the WFO 9 (if you include the added cost of the seatpost), but the WFO 9 sports 30 more millimeters of travel and 3 pounds less weight. Wow.

Next, factor in the suspension adjustability. Both the fork and the shock have full-open, mid, and closed compression settings, allowing the rider to easily flip between modes. And finally, the Rock Shox Pike features a travel-adjust mode, that when activated dials the fork down from 160mm of travel to about 145mm (according to my tape measure). While this reduces the amount of travel in the fork, dialing down the suspension more importantly steepens the head tube angle, and thus tames the front end on the climbs.

For those of you who don’t care about the technical mumbo jumbo, here it is in English: thanks to the WFO 9’s low weight and adjustable suspension, it can climb well enough that I’ve set many personal PRs on the WFO 9 on the uphill segments on Strava. Maybe Niner wants to bill the WFO 9 as their gravity bike (although they do acknowledge that “the WFO 9 is an efficient pedaler and will do AM magic under those who have the legs for the climbs”), but let me tell you, friends: this bike is more than capable of climbing to the top of the mountain as well as bombing down the back side.

If you want to see the WFO 9 in action, check out this video I put together on the Uncle Nazty trail:

The WFO 9 is a burly bike built for burly terrain. Tons of travel, a spot-on component selection, and dialed geometry makes for a bike that absorbs nasty terrain so easily that it feels like cheating. And if you have a penchant for the descents but still want to climb, don’t fear: at less than 30lbs (with pedals) and sporting highly-adjustable suspension, the WFO 9 is more than capable of all-day big-mountain epics.

Many thanks to Niner for providing this WFO 9 prototype for review! 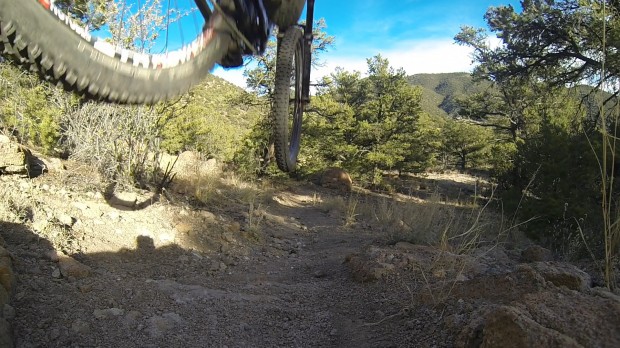 I currently have a Niner RIP.9.RDO and am excited about the new WFO..thanks for the review. One thing I noticed about my RIP 9 is that it likes to dive in the front when jumping off of things; I really have to work hard not to land straight on the the front even with speed. Fortunately, the suspension has saved me every time from going over the bars…but how does this bike feel when launching off things? Does it dive in the front?

How does it feel pedaling uphill over really rocky technical terrain? Did the long wheelbase bob or spin out a lot, or did it just roll up an over stuff?

One of the criticisms I have read from armchair engineers about this bike is the ‘high front end’. Did you feel like the front end was up too high with the 29er wheels and 160mm of suspension, or was the front end snappy enough to ‘roll around’ (not over) object if you need to?

1) It felt fantastic in the air, although I’m not really sure what you mean by “diving” in the front. Do you mean upon take off, or upon landing? If your fork is compressing too much upon landing, you might want to bump up your air pressure or adjust your rebound speed. If your bike is diving on take off, I’m not really sure what that means… perhaps it’s a technique thing that you’re having issues with, as I can’t say I’ve ever really felt what you’re describing.

2) It rolled great on the uphills. On rocky terrain I ran the suspension full open or in pro pedal, and it did great. However, there were times when my legs just weren’t up to the 1×11 drivetrain 🙂 While I’ve heard that the 1×11 doesn’t sacrifice much gear range on the low end, I personally think my own 2×10 setups have more low end than the 1×11 X01 I was riding. Over time, though, I was definitely getting used to the 1×11.

3) The front end is definitely high… however, I ride a size small Niner, so for me the front end could feel higher than it might for someone on a size large frame. So you can say I’m used to tall front ends on 29ers 🙂

That said, I made regular use of the travel adjust feature on the Pike. As mentioned above, the travel adjust drops the suspension travel by 15 mm, which makes the bike feel very different. Dialing down the suspension drops the front end, making it feel a bit more XC and making it handle much snappier. In mellow terrain with no big features, I would often run the fork with the dialed-down travel for a snappier, more responsive ride.

Hope this helps! If you have any other questions, please let me know!

I haven’t ridden this bike. But, re: the high front end – there’s just no way around that on this kind of bike. 29″ wheel, plus lots of travel, the bars are gonna be up high. Chances are though, if you like a low front end you’re not looking at 160mm travel 29ers.

Yes, +1 to that 🙂 There’s physically no way to reduce the height of the front end.

Man, you are really living the life getting to ride these awesome bikes. I wish I could test ride them. Sign me up! lol