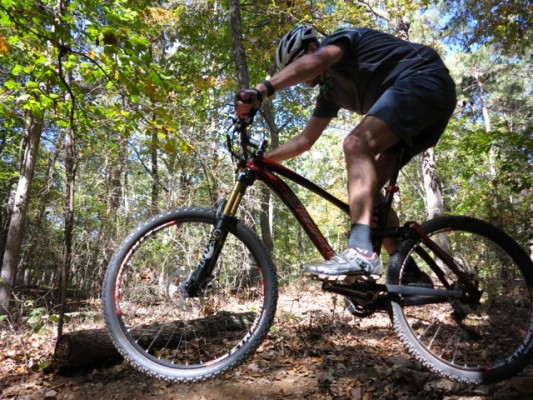 One of my favorite things about having the Absolute Truth 27.5″ in for review is the reactions when I show up to a ride on it. I imagine it must be a similar feeling to show up somewhere in a Lamborghini Aventador. Some people like the looks, and will tell you so. Some people don’t, and will tell you so. Whatever their opinion on the bike, people are dying to talk about it.

Hate all you want, haters. I’m here to ride. Not skillfully, mind you, but still: ride.

Yes, if you read my On Review article about this bike, you know that it generates a lot of jibber jabber. But I can tell you this right now: I freakin’ love it.

People who hate on the Absolute Truth tend to do so because of the design of the rear triangle, which is actually more of a trapezoid, or maybe even a rhomboid, depending how you look at it. 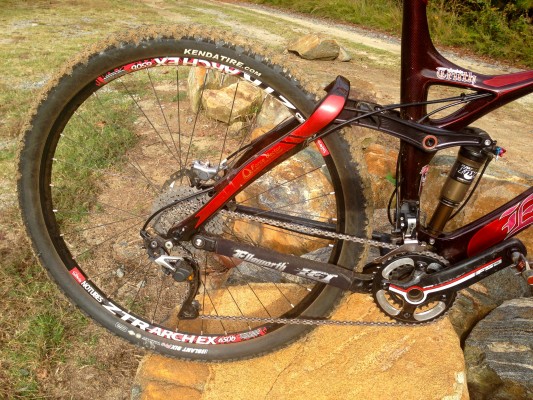 This design is called ICT (Instant Center [of rotation] Tracking), and its purpose is to maximize pedaling efficiency while providing a rear wheel that can absorb bumps. In other words, Ellsworth says the exact same things about it that other manufacturers say about their designs. Ellsworth has a whole section of their web site that deals with the physics behind their design, complete with video. Warning, the site uses Shockwave Flash animation, so don’t click if you’re not ready to go back in time about ten years.

If you look around the internet, you can also find a bunch of armchair mechanical engineers picking apart Ellsworth’s design. These people have the time to do that sort of thing because their schedule isn’t encumbered by any form of romantic entanglement.

Said it before, and I’ll say it again: arguing about a bike’s specifics is just waving your crank around. 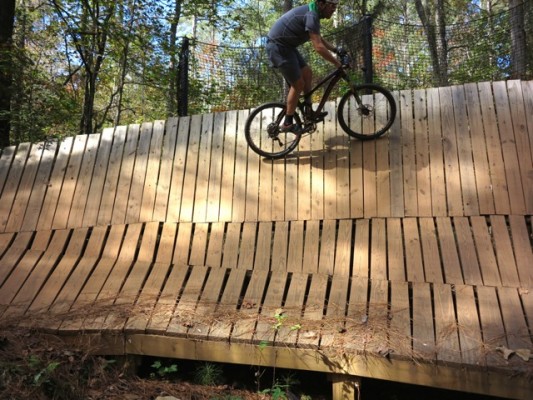 What really matters is whether laying down the chunk of change that a manufacturer is asking for a bike is worth it. In this bike’s case, as-spec’ed (or close), that would be $7,626.41. That’s a lot of dough. But if I close my eyes and imagine I have that kind of money for a bike, what do I want?

Well, first and foremost, I want a bike that looks not only amazing, but unique. I want people to know that I bought something that is not only mechanically adept, but aesthetically remarkable. Absolute Truth: check and check.

In this case, it’s freakin’ sweet. 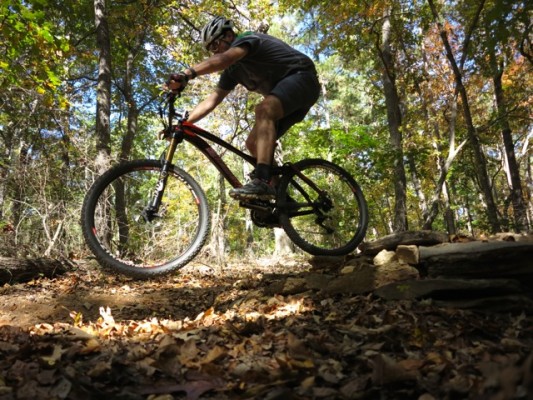 I love the Absolute Truth’s aesthetic. I love how every little piece has a detail on it to show the rider that, yes, even that piece has been thought about. I heard next year’s models are going to have a Thompson cockpit, and while I love the Loaded gear on my test bike, I’m a big Thompson fan. Where the suspension is concerned, I love that Ellsworth came up with a design, patented it, and stuck with it. I can think of another company who came up with a design and more or less stuck with it: Porsche and their 911.

I know that’s two car comparisons in one review, but what can I say? I like cars and bikes. Deal with it.

Speaking of which, remember when Porsche made a mountain bike? Weird, right? 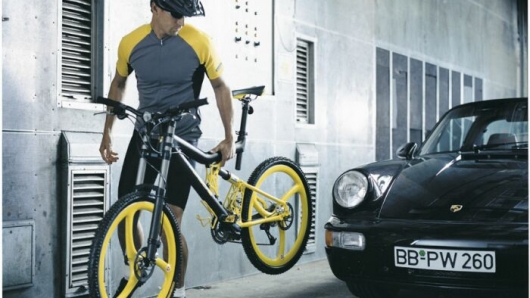 Okay, I’m getting off topic. Back to the Ellsworth. Here I am getting at least 3″ off the ground, or as I call it, “maximum air.” 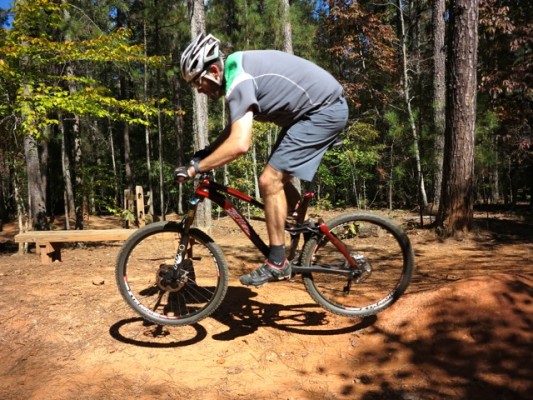 The Absolute Truth 27.5″ suits me to a tee. In fact, I’m kind of in hot water with my editor Greg because I have kept the Ellsworth way too long. They’re ready to get their bike back.

Sorry, guys. I can’t help myself. Fact is, I just like riding it too much. And that’s the Absolute Truth.

It would be nice if you actually reviewed the bike instead of just bellowing a bunch of non-sense or replicating the design characteristics from Ellsworths website…it’s apparent the you like the bike but don’t provide any support as to why (other than you rejoice in its aesthetics).

I am interested in knowing how the bike handles the trail and differing conditions/situations. Why is this bike any better or worse than the plethora of other similar bikes out there?

I own an Ellsworth and love it but would like to know what this new bike brings to the table. I might want one but you provided no useful information in either of your “reviews”. Thanks for sharing nothing worth reading, again.

Thanks for stopping by, Jessica.

If you’ve read my reviews before, you’ll know that I don’t believe it’s possible for a human to tell another human “what it’s like” to ride a bike. I include a disclaimer to that effect in every single one.

If you really need someone to use made up words to tell you absolutely nothing about a bicycle, you’re welcome to go to every other blog and magazine in the world.

I’m summary, I’d review your comment’s aesthetics as being only so-so.

Its going to be a given this bike is going to get comments on its looks alone… What struck me as odd, this bike “looks” like it might be too small for you – especially in the last pic where you’re getting “maximum air”. You don’t state your height, or the size of the bike (but then again most review[ers] don’t), but it did strike me as very small looking, even if it is 650b. Did it feel “small”? (and by extension: flickable, nimble etc?)

I have long legs. I typically choose to ride a smaller bike with more seatpost just because I prefer a smaller bike for various reasons. My MTB is already big enough. It barely fits in the back of a Suburban with one row of seats removed and the other laid down. I can’t imagine how immense an XL would be.

Thanks for the clarification! I find that interesting you like a smaller sized bike – I’m the opposite – I like a bike that “fits me”. Thanks again

Have to agree about the comments that this is not much of a review, but no big deal. All in light fun I guess. His first review is much more helpful, but there is really nothing much in either about how the bike actually rides. I guess one can just do a search and find a better review on the bike. Maybe the title of the article should “Final Jibber Jabber … …”, borrowing from the writer’s own content.

That’s kind of how we do it. The On Review article is typically technical details, and the final review is general ride impressions.

I refuse to insult readers’ intelligences by using nonsense words to impart something that can’t be imparted. I’m shocked that a handful are so used to being fed industry BS that they demand it.

Hearing other riders true own experience on a bike and how it might climb, descend or handle otherwise is often valuable. Sure it won’t be the exact same for any rider, but that doesn’t mean it is useless or insulting — just friendly sharing of experiences. BTW, who is “we” in your first sentence, “That’s kind of how we do it.”

I think we do need to realize that every single writer has their own way of reviewing a bike and imparting its value and lack there of. Jim is a much funnier writer than me, and he does a great job showing with an entertaining way whether or not a bike is fun to ride. Because at the end of the day, that’s our question, isn’t it? Is a bike fun to ride, or not? I think Jim answered that with a resounding answer: YES.

Me, I’m just not that funny. I’m stuck onerously relating how I thought a bike climbed, descended, and handled certain applications. But undoubtedly, there are readers who enjoy those reviews–and there are readers who enjoy Jim’s reviews. Since both Jim and I (and the rest of the blog team) all write for Singletracks, you get to see both sides of the coin 🙂 For more from my side of the coin, stay tuned for a 2015 Cannondale Trigger 27.5 review, coming soon. Don’t ever expect me to write anything nearly as funny as Jim produces on a daily basis!!

As for the ideal application of this bike and who it’s best suited for, I believe Jim tackled those question in the On Review article, here: http://www.singletracks.com/blog/mtb-reviews/on-review-ellsworth-absolute-truth-27-5/

Dave, your point is duly noted. It’s impossible to denote how a bike will ride for someone else, but it IS possible to relate how the reviewer thought it handled when he was riding it. Thanks so much for the feedback!

I have no problem with Jim’s review other than he likes that rear “triangle”. 🙂

Double diamonds for me please!

I own the ATruth and it has taken my riding to another level because of size, ( I have an XL Specialized Stumpjumper 29’r) and the AT is a large 27 1/2 of course. I can climb better and turn much sharper. This is mostly because of size I agree but having said that, I needed to get the smaller one and rode several to decide. I love the rear set up and believe it would be hard to improve on with the geometry talking. It reacts much better than the brain system I have on the Stump. I did put a dropper post on it and that was a big change because it is the only cable running on the outside. It was worth it however. I do get comments on the ride and they have been WOW.