As we all know, it’s tough to get your rides in during the winter, especially on weekdays. The early sunsets, cold temperatures, and generally shitty weather easily sap all motivation required to layer up. Some decide to take the winter off the bike, and that’s a good solution, unless of course you need to ride – whether for fitness or mental health reasons.

Now, a trainer ride can’t hope to compete with a ride outdoors, but it does eliminate many of the excuses we use to keep ourselves off the bike. Of course the tradeoff is that riding a trainer can be mind-numbingly boring. That may be changing, though, with the advent of smart trainers and associated training apps.

The Hammer is a new, direct drive, smart trainer from CycleOps. They sent one over for me to check out this winter.

What is a smart trainer?

We’ve all seen rollers and turbo trainers, but what exactly is a smart trainer? Essentially, it’s a trainer that can communicate wirelessly (via Bluetooth or ANT+) with apps (Zwift, TrainerRoad, etc.), cycling software, and cycling computers. This allows the resistance of the trainer to be adjusted, on-the-fly, by the app or device. Smart trainers, like the Hammer, also have a built-in power meter, which is currently the gold standard for precise training. 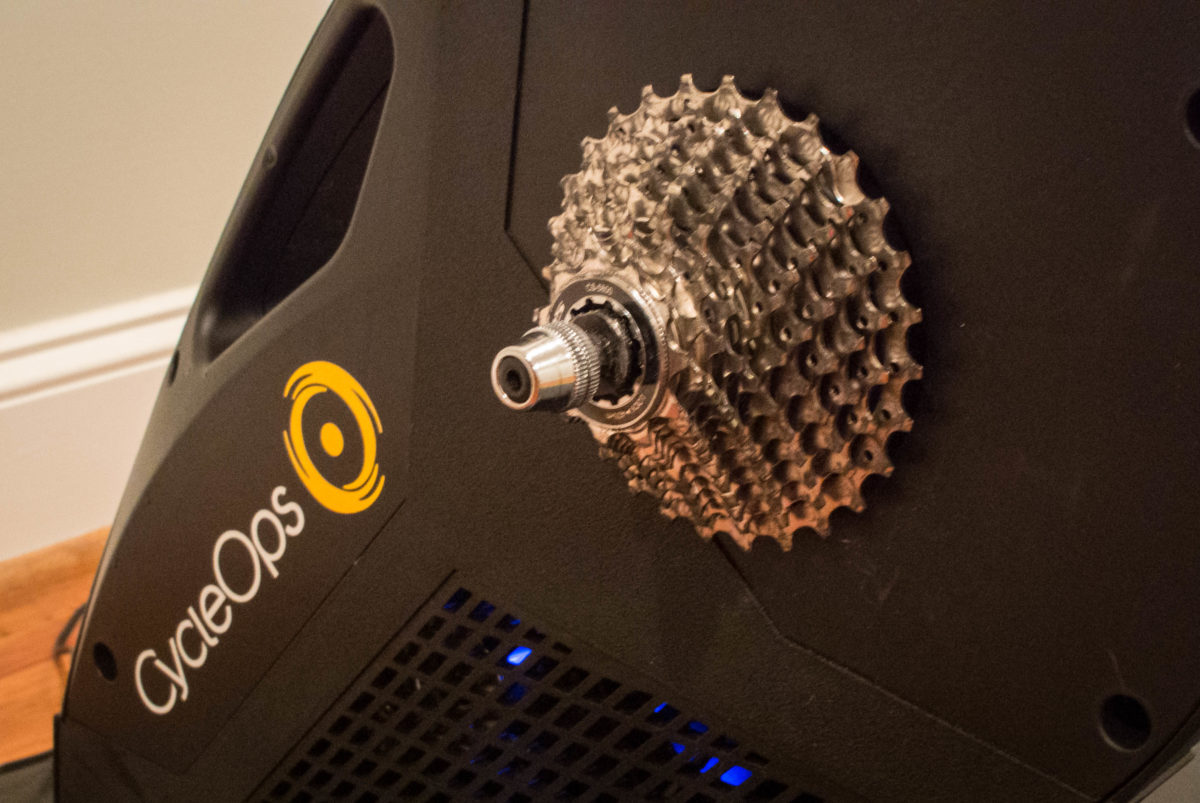 The Hammer is a large, heavy, black wedge. It comes in just under 50lbs, but it has a well-placed handle that makes it easy to move around. Much of that weight is from the 20-pound flywheel, which is said to provide a “true-to-the-road riding experience.” Resistance is adjusted electromagnetically. CycleOps claims the Hammer can handle up to 2,000 W, simulate climbs up to 20% grade, and measures power output with an accuracy of +/- 3%. CycleOps is part of the Saris Cycling Group, which also includes power meter maker PowerTap, whose tech was incorporated into the Hammer.

There are two legs that stabilize the Hammer, but they can be folded underneath the unit, giving it a slim profile for storage. Those legs also hold a small tray for the front wheel along with a disc brake pad spreader for those that can’t resist squeezing their brake levers. Another clever touch is the adjustable footpads on the legs: they can be rotated to compensate for an uneven floor.

As stated, it’s a direct drive trainer, which means you take off your rear wheel and mount your bike directly to the trainer itself. This keeps you from wearing out your rear tire and it’s also substantially quieter than a regular turbo trainer. The freehub body on the Hammer is compatible with Shimano cassettes up to 11 speeds (cassette not included). It supports a variety of rear wheel spacings including 130 and 135mm quick release, and 142 or 148mm thru axle. The end caps for the various spacings are included in the box and can be swapped out with an allen wrench or adjustable wrench. Unless your only ride is a DH bike or a fat bike, you should be covered. 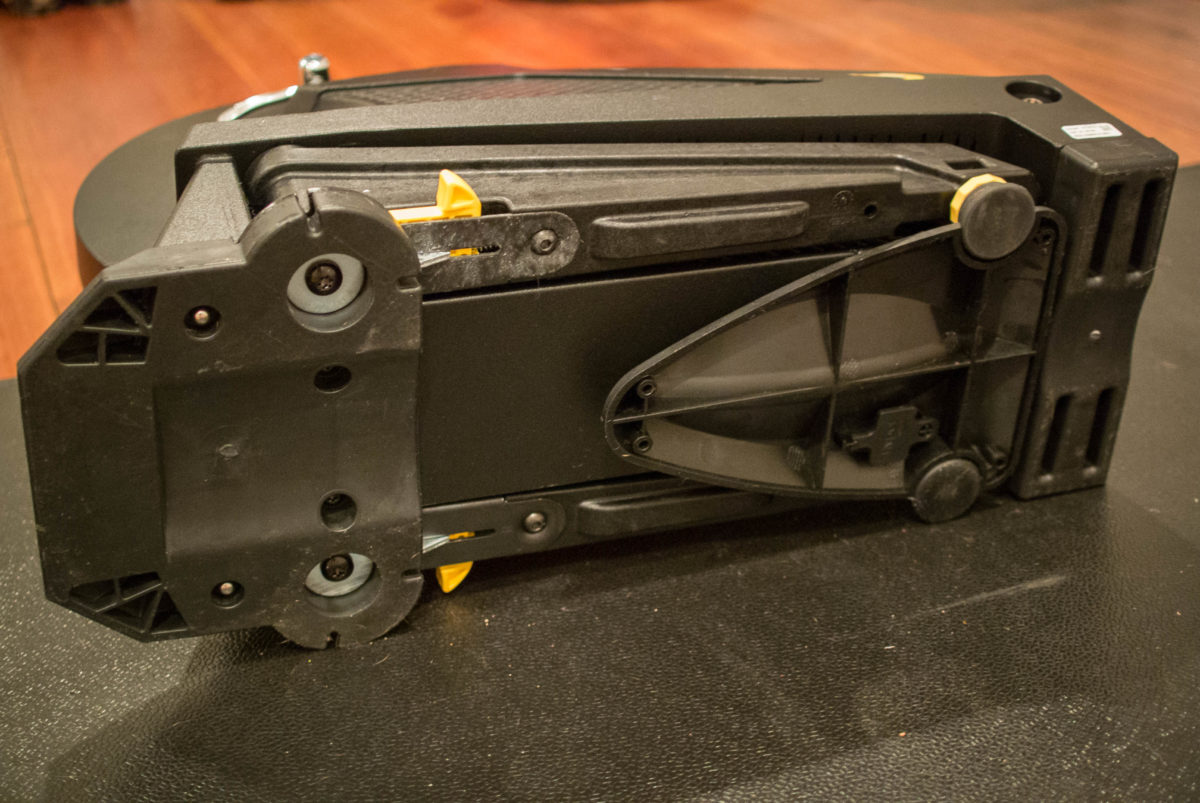 It’s equipped with both ANT+ FE-C and Bluetooth 4.0 connectivity, which allows it to communicate with the aforementioned apps and devices. For the most part, set up is as simple as unpacking the Hammer, plugging it in, and connecting it to your desired device.

Let me preface this section by saying that I’ve been riding for years, but only recently have I started doing structured training. I have used several rear-wheel-on turbo trainers in the past, but this was my first experience with a smart trainer and all the associated apps. As such, I’m still a bit of a novice when it comes to training, particularly training with power. I have only a basic understanding, so I won’t nerd out on numbers. Instead, my review will relate my general experience with the Hammer.

Setup was fairly straightforward: remove the Hammer from the box, pull the legs into position, mount the cassette, plug it in, and put your bike on. In all, that took about 15 minutes. The first snag I hit was trying to pair the Hammer to my laptop. I have an older Macbook Pro, but it has Bluetooth so I thought I’d be alright. Not so, sadly. As it turns out, the Hammer and my laptop don’t share the same Bluetooth protocol. In order to communicate with a laptop, you need an ANT+ dongle. You can snag one off of Amazon for around $20, but it really would have been nice for CycleOps to include one in the box. I could, however, get the Hammer to communicate with my iPhone, so I was able to use that until the dongle showed up.

One of the first things I noticed about the Hammer is how quiet it is. When I was training for the Trans-Sylvania Epic last year, I used a regular turbo trainer where you leave the rear wheel on. That thing sounded like a jet engine idling, and the faster you go, the louder it gets. Before my lady and I moved, the noise wasn’t too big a deal since we had a basement. At our new place, there is no basement, which meant I had to set up the trainer in the house. My old trainer was so loud that I either had to schedule my workouts for when Susan wouldn’t be home, or she had to sit in the back of the house… with headphones on (sorry babe!).

The Hammer is by no means silent, but the difference is night and day. We set it up in our spare bedroom, and with the doors closed, there’s a low hum, which is easily ignored. The noise level is constant as well, so even when I was mashing my brains out, the Hammer didn’t get any louder. If you share your house with anyone else, or live in an apartment, this feature will be greatly appreciated.

The second, most notable feature is how smooth and natural the Hammer feels while pedaling. You can go from cruising along at an easy pace to an all-out sprint with a seamless transition, just like in real life. And, thanks to the direct drive, you don’t have to worry about your rear tire slipping when you’re laying down the watts. This of course assumes you’re pedaling while seated – standing up to pedal still feels awkward since the bike can’t rock side-to-side.

During the course of the winter, I tried controlling the trainer with a couple different cycling apps as well as my Garmin Edge 520. My favorite app ended up being Zwift. Zwift is, in essence, a video game. Once you sign up for an account – a membership is $10/month after a seven day free trial – you are transported to a virtual world of road cycling. You can choose to follow a predetermined route, a specific workout, or you can just wing it. Once you’re out on the road, Zwift communicates with the Hammer to adjust the resistance. So, if you’re going up a hill in Zwift, the Hammer’s resistance will increase to simulate the climb. When you head downhill, resistance drops and you’re free to work on your leg speed by upping your RPM.

The other thing that makes Zwift unique is the social component. At any time there are literally thousands of other riders from around the world sharing the road with you. There are even organized group rides and races. You can really dork out on Zwift – there are entire blogs dedicated to the app – but that’s really the long and short of it. Let’s hope an off-road version of Zwift is in the works…

Zwift was not without faults, though, as it would sometimes drop its connection with the Hammer, which would temporarily eliminate resistance. Even less common, Zwift would randomly eat ride data. Those problems rarely occurred, but they were annoying when they did. Another thing to note is Zwift is a graphics-intensive program. You’ll need a speedy computer to run it well, or a newer iOS device like an iPhone or iPad. Currently, there is no support for the Android platform. On the whole it was an overwhelmingly positive, but not perfect, experience.

For a slightly lower tech solution, I used my Garmin to control the Hammer. There are actually a variety of ways you can do this. You can build a workout in Garmin Connect and transfer it to your device; you can follow a course you’ve done before, such as a race; or you can freestyle it by manually adjusting the resistance as you ride. If you’re following a workout, the Hammer’s resistance will vary based on the interval. For courses, it’s similar to Zwift – when you hit a “hill” the resistance will increase.

As the weather warmed, I started doing more of my training rides outside, although certain workouts were easier to accomplish on the Hammer. Basically, anytime I was trying to hit very specific power targets, it was simpler to do in a controlled environment. It’s also a great tool for tracking your progress by completing a functional threshold power test every few weeks. 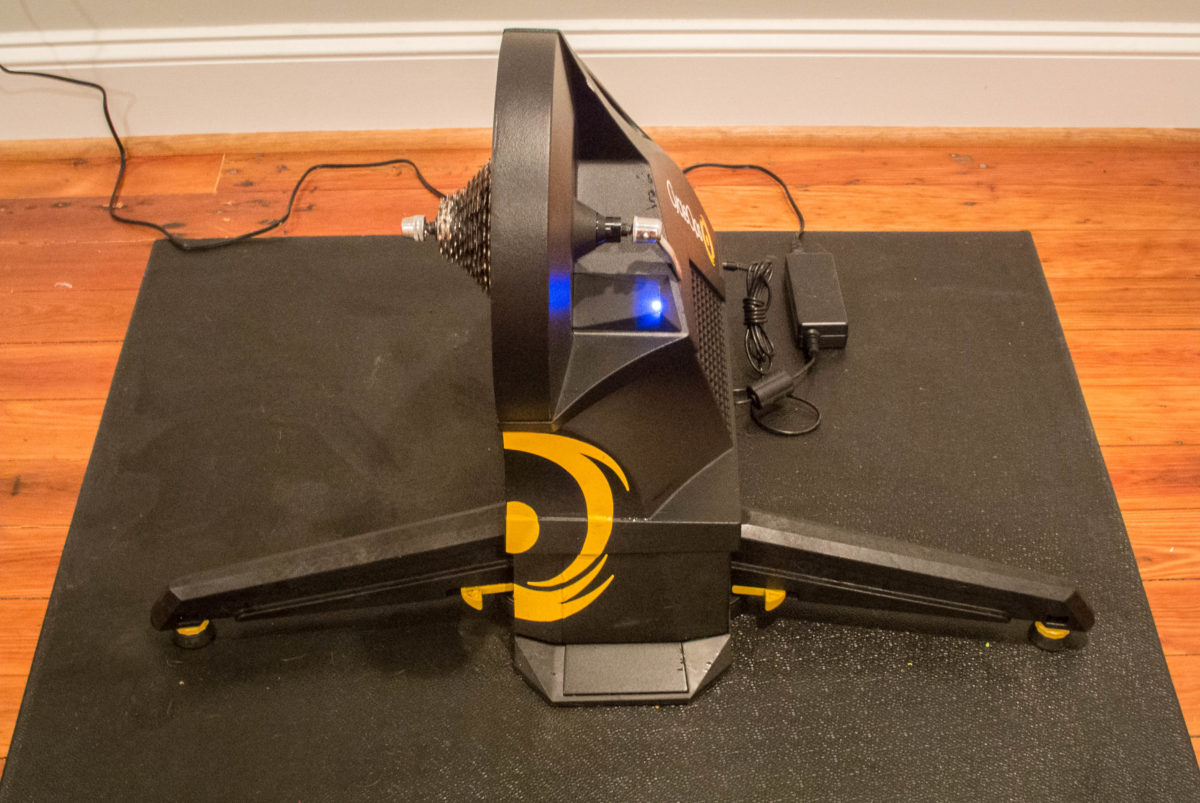 None of the issues I experienced during the test are the fault of the Hammer. It is a solid, well-made, and well-thought out product. It’s been sweat on for hours at a time, and I’ve hammered it with every bit of strength my 200-pound frame can muster. Nothing has loosened or started to creak.

Any issues I had were on the tech front – getting everything synced up wasn’t always the smoothest process. Some of that is probably due to the fact that I’m not the most tech-savvy person, but sometimes software is just buggy. Once I got all the kinks worked out, I could be on the bike and riding within a few minutes. For those that are easily frustrated with technology, smart trainers in general are likely a bridge too far. While you could use the Hammer in so-called “headless” mode – sans app or cycling computer – resistance is limited to 200 W, and there’s no way to control it. Know heading in that you’ll need to either spring for an app subscription or a device to control a smart trainer. Otherwise, you’re spending a bunch more money for no reason.

My experience with the Hammer did push me out of my tech comfort zone, and forced me to figure a lot of shit out on my own. I learned a ton about Zwift, building workouts, and the features of my Garmin. It also lead me to reading a lot more about training, how to use power to get the most out of my workouts, and how to track my fitness using power. 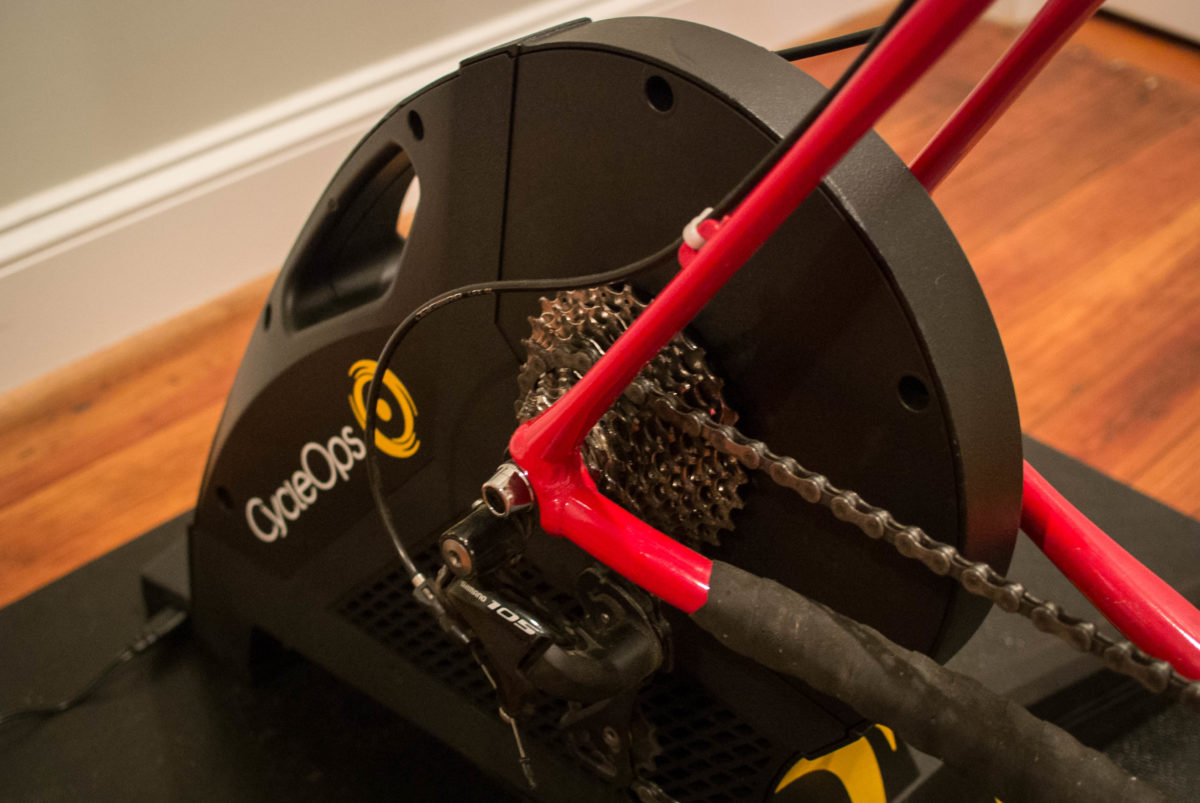 CycleOps’ Hammer is a huge step up from a “dumb” trainer. Not only is it packed full of tech allowing it to communicate with a variety of apps, the Hammer is quiet and provides a natural ride feel. When Susan saw how much I was enjoying Zwift, she signed up for an account as well. The Hammer kept both of us motivated to stick to training plans this winter, allowing us stay on top of our fitness ahead of the prime riding season. Once I had my workouts built and my setup routine down, I could smash out a hard ride in an hour to an hour and a half – perfect for maximizing that precious after work time.

Thanks to CycleOps for providing the Hammer Direct Drive Trainer for review.