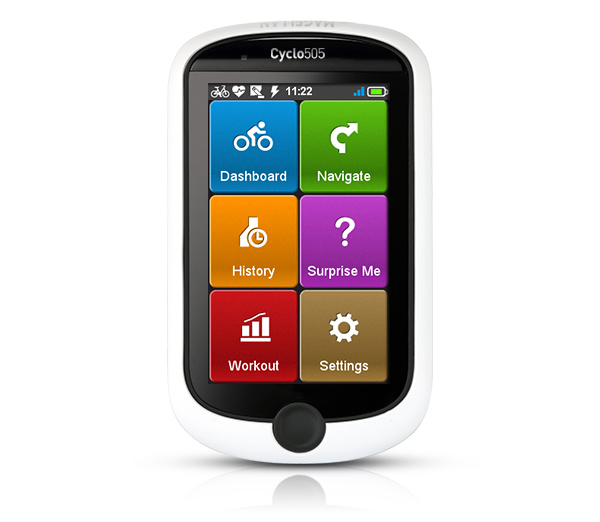 Magellan has been producing quality GPS units for a long time. I recently got a chance to test their newest cycling-specific GPS: the Cyclo 505. This was my first time using a Magellan GPS on the bike since 2007 when I reviewed the eXplorist 400, a decidedly cycling-unspecific GPS unit. Clearly a lot has changed in 7 years!

The Magellan Cyclo 505 comes with a feature list rap sheet too long to recite here so I’ll cherry pick my favorites. #1 on my list: pre-loaded OpenStreetMap basemaps and bike shop locations. OpenStreetMaps is a bit like Google Maps but in many areas, it’s even more detailed, showing things like bike lanes and even trails (more on that later).

The Cyclo 505 also features a 3-inch color touchscreen screen which makes it easy to distinguish map details when you’re out on the trail. A rechargeable battery powers the backlit screen for up to 12 hours at a time.

Surprise Me routing is a cool feature that suggests cycling routes based on your personalized profile, current location, and the distance you want to ride. For example, fire up Surprise Me routing at your office to get three potential 25-mile road routes starting at the door and varying in difficulty from easy to difficult.

Of course you also get all the standard riding metrics you’d expect from a cycling GPS in a customizable dashboard that allows you to focus on the things that matter most. Distance, speed, time, elevation, and heart rate are just the start; you can even see things like the current trail grade and calories burned.

The Magellan Cyclo includes a ton of navigation features as well. The GPS can route you to an address, point of interest (like a bike shop or cafe), a point on the map, or even raw GPS coordinates. You can also navigate track files downloaded from sites like Singletracks, or even use routes shared wirelessly by other Cyclo users. Each navigation route shows a preview of the distance and elevation profile so you can see how difficult the ride will be. 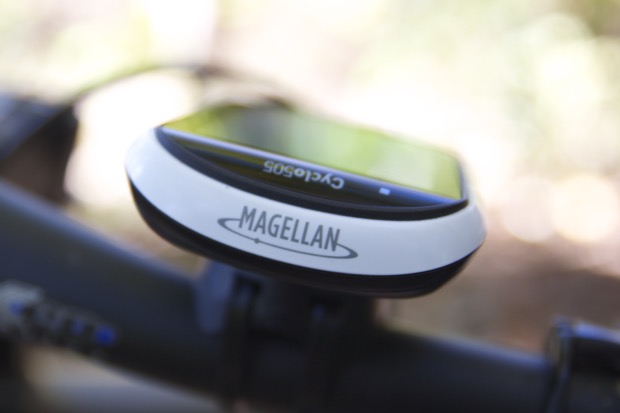 The whole package weighs about 125 grams and is about the size of a deck of cards. Magellan includes standard zip-tie mounts and even a more secure “out front” handlebar mount for improved visibility on the bike.

The Cyclo is designed to be a cycling GPS–and not just for roadies. The built-in OpenStreetMap basemaps show amazing detail, including trails in off-the-radar locations like Ira B. Melton park just down the road from Singletracks HQ. To be sure, Ira B. is not an MTB destination trail system by any stretch of the imagination, but navigating the spiderweb of trails was a cinch with the Cyclo 505.

The Cyclo bar mounting system kept the GPS firmly mounted to my bars, even over washboard technical trails. Unlike some mounting systems that utilize tricky tabs, the Cyclo twists to lock and unlock so it’s easy to throw on the bike when it’s go time.

In the GPS accuracy tests we conducted recently, the Cyclo was one of the more accurate units in both our distance and elevation tests. Tracks on screen looked a little chunky (Magellan uses large red dots to mark your breadcrumb on the map) but the downloaded data looked much better on a desktop screen.

Speaking of the screen, the touchscreen works well with gloved hands and the single button makes it easy to toggle functions without losing your grip on the bike. However, the screen does look low res (because it is) compared to a smartphone, and the touchscreen isn’t nearly as responsive as a smartphone. Yep, we’re all spoiled by our phones, and I found myself futilely trying to pinch to zoom maps on the Cyclo like I would on my phone.

And speaking of smartphones, I found pairing the Cyclo with my phone via Bluetooth worked really well. Call and text alerts come through to the GPS and I was even able to control my iPhone’s music player using the Cyclo touchscreen. With the GPS paired with a phone, there’s no need to fish the phone out of your pack to see who called or to change the track on your playlist.

The Magellan Cyclo 505 (from $429 MSRP) is a feature-packed GPS that mountain bikers will find incredibly useful both on the trail and on the road. With detailed basemaps built in and bristling with wireless options, this is a GPS that can serve faithfully as your bar-mounted command and control post.

Glad to see Garmin getting some competition.

For Garmin users, RideWithGPS sells SD Cards with open source maps installed for something like $20. I have one in my Edge 800. Would really like a convenient way to get trail networks added to the basemap.