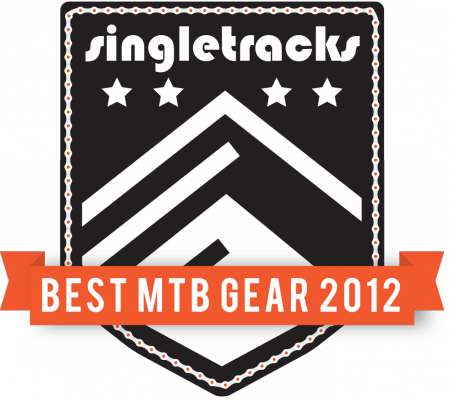 Each year ahead of Interbike we score the user-generated mountain bike product reviews on Singletracks and compile a “best of” list. There was a ton of cool gear released in 2012 so naturally competition was fierce. In the end, the following products ended up on top.

If you’re doing some late-season shopping for MTB gear, you can’t go wrong starting with this list. The best part is, most of these items will be back for 2013 with updates and tweaks to make them even better. Stay tuned for our Interbike coverage next week!

The Singletracks “best of” list is compiled based on average member ratings, the number of ratings, and the number of times the gear is included on member wishlists and “my gear” lists. The 2012 rating period started Sept. 1, 2011 and ended Aug. 31, 2012. Start reviewing your favorite gear today to influence the 2013 list.

I love “Best Gear of the Year” articles/blogs, etc., but I can’t figure out how the entry level hardtail Giant Talon 29er won “Best 29er Mountain Bike” for this site. Did a computer pick this bike based on reviews from users? I had a similar hardtail but upgraded to a Trek Superfly Elite because Colorado trails were eating my hardtail alive.
How about the Niner R.I.P. 9 or Jet 9? Or any number of Specialized or Trek or Kona or Pivot or Salsa or Yeti or Cannondale or (fill in the blank) full suspension bikes?!?
No, sorry, but the Giant Talon 29er should not be on any list of best 29ers (unless all of the other bikes on the list are from Walmart).

We use an algorithm to pick the items (see the last paragraph above) but the real issue in this case is the overlap in bike categories. Should 29ers have their own category? At this point, maybe not. There are all types of 29ers available today that fit XC hardtail, XC full suspension, and even AM categories in addition to the broader “29er” category.

The other thing to keep in mind about this list is that it’s really like the people’s choice awards–not the academy awards. If we had a panel picking the best stuff, the list would mostly include very high-end bikes and components. Instead, we get a good representation of what people are actually buying, riding, and ultimately enjoying.

” If we had a panel picking the best stuff, the list would mostly include very high-end bikes and components. Instead, we get a good representation of what people are actually buying, riding, and ultimately enjoying.”

I found this really interesting. I saw Avid BB7’s as the “best brakes” and was like, really? But in today’s economy, BB7’s are a very dependable mechanical brake that are very affordable when compared with some super-expensive hydraulic models. It’s very interesting to see what the masses are using!

Good point. I bought my Superfly because it was $600 off (end of season sale) and, like most, I love a great value.
Yes, a full suspension carbon fiber wonder-bike would probably win outright if price wasn’t a factor but in today’s economy the least expensive bike that gets the job done for the most people is a winner.
Still, here in Colorado, 90% of the bikes on the trails are full suspension and I will never go back to a hardtail unless I move to a little less “rocky” area.
Thanks for providing one of the best websites on the interweb!

“The other thing to keep in mind about this list is that it’s really like the people’s choice awards–not the academy awards. If we had a panel picking the best stuff, the list would mostly include very high-end bikes and components. Instead, we get a good representation of what people are actually buying, riding, and ultimately enjoying.”

That’s my favorite part about it. It’s stuff I can actually afford!

“If we had a panel picking the best stuff, the list would mostly include very high-end bikes and components.”

you could do both! sometimes it’s good to see the differences between the “money is no object” products versus the “i live in the real world” products. biking can be expensive but i’d rather eat ramen and pony up for quality.then end up regretting my hard earned purchase in a few months.not that these aren’t quality, i’d just like to see the opinions of both the “average joe” AND the professional. also, (understandably easier said than done) it’d be nice if there were some clearly written reasons as to why each product outshines it’s competition (maybe even details as to what it’s competition was?).

I really hate to sound HIV negative because i’m sure these are great products I just think it would be beneficial to provide more info as to why they are the best and compared to what?

Hmmm… an editor’s choice award–I like it! We do a holiday gift guide each year and the items are picked by our editors but maybe we could do a little more in conjunction with the “best of” list each year.

Still, aside from truly affordable products like the BB7s and the Giant Talon, the list DOES include some pretty high end stuff like the Santa Cruz V10, Rock Shox Reverb, Oakley Half Jacket, and Crankbrothers handlebars.

To read more about the products on the list above, just click the links to read member reviews. Also this page highlights one positive review for each product so you can see at a glance why it is included.

I’m definitely looking forward to an “Editors Choice Award”. For the few of us which are lucky enough to be able to afford such luxuries, it’s good info to have.

Only Camelbak backpacks? While good, they are nothing compared to an Osprey.

Even though I fuss with my M.U.L.E. sometimes when attempting to cram the hydration bladder in, it has never let me down. In Tahoe I had all the regular stuff (patches, tubes, water, food, first aid, camera) plus a rain coat, wind breaker, leg warmers, arm warmers and long fingered gloves and still managed just fine. It all fit! Long live the M.U.L.E!

I’ve been using a camelbak mule since 1996, excellent product, I agree bladder can be a pain to put in, but I’ve never had any issues otherwise. Isn’t osprey a helicopter?