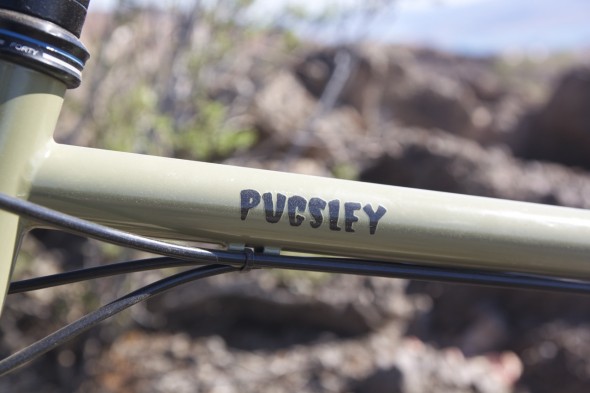 I totally don’t need a fat bike where I live but after riding the Surly Pug Ops today I need to find an excuse to get one. Not only are these bikes suitable for postapocalyptic transportation (seriously), they’re also fun and surprisingly rideable on the trail.

I’ve test ridden a few fat bikes and I have to say my impressions have changed a bit over time. When I reviewed the Moonlander in 2011 I wrote it was “terrible at cornering” which was probably a bit harsh even then. After my ride today I found lowering the tire pressure can really make a big difference in cornering. It’s still a little awkward in terms of handling but traction is great and there’s little chance of washing out in the turns. Typical tire pressures for bikes like the Pug Ops range from 10psi (sand, rocks) down to about 5psi for snow. 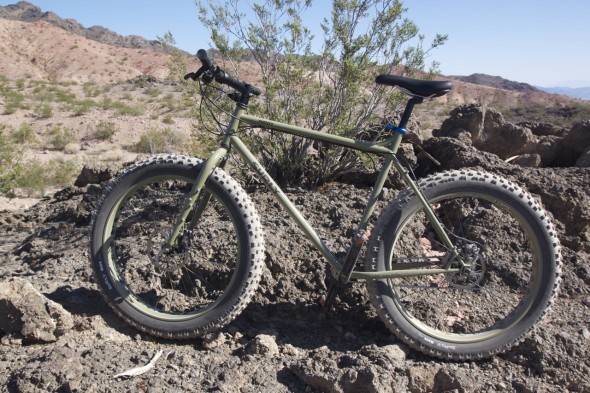 The Pug Ops doesn’t include a suspension fork for a number of reasons (weight, simplicity) but perhaps the biggest reason is it just doesn’t need one. The 3.8″ Nate tires soak up bumps and chatter, though I found myself a bit caught off guard whenever I felt the thunk of a sharp drop or square-edged rock.

Many riders are familiar with the Surly Pugsley and the Pug Ops is basically the same bike (frame and fork) with a couple component swaps. The Pug Ops comes shod with 3.8″ Nate tires on 82mm rims (compared to the 65mm rims on the Pugsley). This increases the tire’s footprint since it’s more spread out, producing even better traction.

Like the Pugsley, the frame is cromoly steel and includes bosses for mounting dual water bottles, fenders, and racks. You know, all the stuff you need to haul gear in case of Snowmageddon or a national emergency. Seriously, these bikes are built to be tough and keep you moving in the most remote and extreme conditions you can imagine. 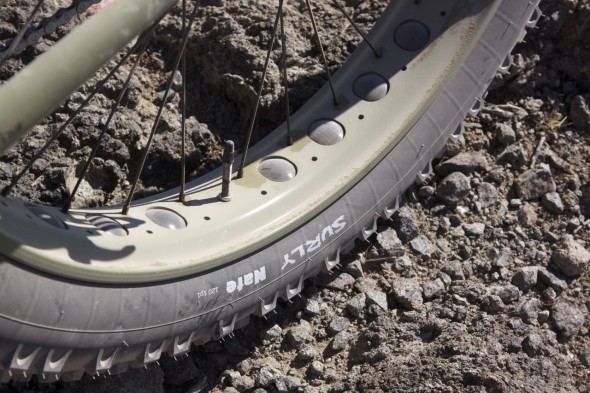 I spoke to one of the Surly reps about the possibility of tubeless tires and he assured me it’s been done before. Note, the rims actually include large cutouts to save weight but the word is judicious use of Stan’s or Gorilla tape will seal the rims up. Remember, the tubes for these tires and massive which means they’re heavy and expensive so going tubeless isn’t a bad idea. However, some of the fat bike riders I spoke with said they didn’t completely trust the DIY tubeless set-up for really big rides as there is always some air leakage. Oh, and don’t forget to add an extra scoop of Stan’s sealant to account for the added volume! More on tubeless fat bike wheels later…

If you’re looking to add another bike to your quiver, no other mountain bike will turns as many heads as the Pug Ops with its military grade paint job and monster truck tires. It’s a fun bike to ride and if you live somewhere the snow stays on the ground for a while, the Pug Ops is a really great choice.

RE: Tubeless use…I’ve got a customer lined up getting some tubeless 29+ wheels built using the new Velocity Dually rims, looking forward to putting them together.