The Off Road Assault on Mt. Mitchell (ORAMM) has earned a reputation as one of, if not the, toughest endurance race in the Southeast. 2015 marks the 16th time racers have lined up to tackle the 62-mile course with 10,500 feet of climbing.

While other endurance events have come and gone, ORAMM keeps chugging along, easily selling out its 500 entries each year. So what is it about this race that keeps bringing people back? I headed up to North Carolina to find out for myself.

62 miles. 10,500 feet of climbing. No matter who you are–a pro or weekend warrior–that’s a big day on the bike. As did Jerdon Mountain Challenge, ORAMM starts and ends in the town of Old Fort, NC. Both races may cover similar ground, but they’re entirely different beasts.

ORAMM heads west out of Old Fort on Old Highway 70. With a field of 500 riders, you need a good long section of road to space the riders out right away. Luckily, you’ve got about 8 miles of asphalt and gravel before hitting any singletrack.

Old Highway 70 turns from pavement to gravel and then merges with Mill Creek Road around mile 7. Soon after the merge, you’ll be heading up the tight switchbacks of Kitsuma–all the way to the top and then all way down the other side of the mountain. Once at the bottom, you’ll be on Mill Creek Road again for a few miles to get over to Star Gap at its western terminus.

Be prepared to push your bike for a little bit as the beginning of the climb is steep, technical, and probably wet. The rest of the climb is rideable, but it’s tough going. Expect more steep and tight switchbacks akin to those on Kitsuma. Top out on Star Gap and you’re faced with tight, steep switchbacks going down.

Jarrett Creek Road is next and it’s an easy, mostly downhill, gravel cruise for 8 miles. And then comes the suck that is Curtis Creek Road. Settle in, because you’re going to be on Curtis Creek for a long, long time. 9+ miles and 2,500 feet of elevation gain await.

Eventually, you’ll hit the Blue Ridge Parkway, but that doesn’t mean the climbing is over. No, no, no! You’ve still got another 1,000+ feet of elevation to gain during your 6 miles on the Parkway. There is a much-welcome 1.5-mile descent mixed in there, though. Luckily the views ease some of the pain of the ride.

After your time on the Parkway, I’ve got bad news. There’s a hike-a-bike. It’s not long–maybe a couple hundred yards, at most–but man is it steep. This is the beginning of the Heartbreak Ridge trail. Push to the top and strap in, shit’s about to get real–real steep, real fast, and real technical.

The descent down Heartbreak will put your skills to the test, especially considering all the climbing you just did. It’s best to ease into it and do a “system check” before really letting go. Heartbreak will connect you back to Star Gap, and you’ll bomb down what you pushed up earlier in the day.

Star Gap dumps you back out on Mill Creek Road and you’ll head back over to do a second lap of Kitsuma. Up, up, up. And down, down, down. You’re almost there. Just 3 more (mostly downhill) miles back to Old Fort, and beer.

The field at ORAMM was over three times the size of the Jerdon Mountain Challenge the day before. It took a long time for everyone to filter out onto the road, but everyone was taking it easy and being polite. There was plenty of time for racing.

I eased into the first section of road to see how the legs would respond after the previous day’s effort. Turned out I was feeling pretty good, so I began making my way through the crowd. Even this early in the race, small packs had formed on the road, and I leap frogged between them. I wanted to get around as many folks as I could before we got to Kitsuma.

The first time up Kitsuma went by quickly. I had made it far enough up in the field that everyone was riding the switchbacks without any trouble. I was even able to catch a few folks on the ensuing descent.

Getting over to and up Star Gap was pretty uneventful. A string of us did get jammed up behind a guy that was having trouble getting around the switchbacks on the way down, though. It was a bummer to have to ride the brakes for the majority of the downhill.

Jarrett Creek Road went by in a blur. It’s 8 miles of rolling downhill gravel with no blind corners, so I was able to really open it up. And then came Curtis Creek Road.

People will recount their experiences of Curtis Creek Road with a distant look in their eyes. It’s a terrible, terrible climb. I know you’re probably thinking, “What’s so bad about a gravel road?” It’s not the grade, it’s the length. The climb goes on and on and on. The bottom of it is beautiful. Curtis Creek is lined by huge, moss-covered boulders and the road is shaded. It’s peaceful and serene. But then it just keeps going up. And as you climb, the grade increases.

Being a big guy, I knew this was going to be the toughest part of the day. As the climb dragged on, people I had passed earlier went by. I had been on a decent pace before, but now I was bleeding time like crazy. I even had to get off and walk for a couple short sections, just to keep my legs from cramping. By the time I hit the Blue Ridge Parkway, I had been on Curtis Creek Road for an hour and a half.

While I was pumped to finally be on the Parkway, I also knew that I had more climbing ahead of me. I was moving at a snail’s pace, so I made the best of it and took in the views along the Parkway. If you’ve never checked out the Blue Ridge Parkway, you really should. It’s absolutely gorgeous.

As I mentioned above, there was a much-welcomed mile and a half descent on the Parkway. After nearly two straight hours of climbing, it was nice to coast. It didn’t last long, though, as there was another short climb on the Parkway and then the hike-a-bike to the top of Heartbreak Ridge.

Nearly all of the elevation that I had gained over the previous 15 miles was about to wiped away in just 6 miles of descending–somewhere around 3,000 feet. That’s just bananas. I had a small crash near the top when I slid out on some slickrock, but I absolutely crushed the rest of the descent. I caught people left and right, many of the folks that had passed me going up Curtis Creek.

When Heartbreak joined Star Gap, I continued my rampage down the mountain, cleaning the tricky bottom section. At this point, I was almost home free. All that lay ahead was another trip up and down Kitsuma.

I didn’t have the legs to power through many of the switchbacks, so I walked where I needed to. Walked with a vengeance, I should say. I used Rich Dillen’s method of channeling my pain and anger into forward propulsion. Near the top, a rider I had been leap-frogging all day caught back up to me.

He asked if the climbing was almost over, and I told him we were on the last false summit before the real descent. I asked him if he wanted to get around me, but he declined, saying he knew I’d be faster on the descent than him.

I was going to rip the mountain a new one and mash my brains out on the road with whatever I had left. Sure enough, I passed a couple more people on the downhill, but no one came around me before the finish. 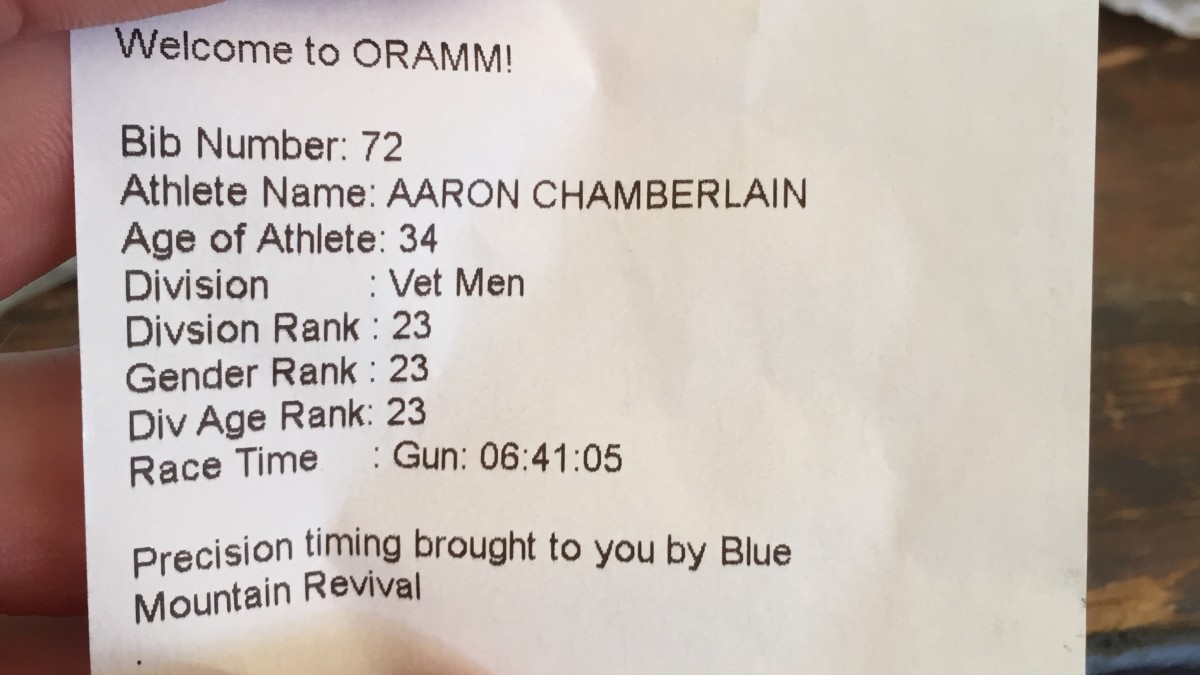 I crossed the line with a time of 6:41:05, which I’m fairly happy with. My goal was a sub-6:30 time, but with doubling up on the Jerdon Mountain Challenge the day before, I just didn’t have the legs.

Immediately after crossing the line I found the nearest shade, dropped my bike on the ground, and took of my sopping wet gloves and helmet. My girlfriend Susan was there waiting for me with our dog Murray; I was so happy to see them. She went and grabbed a Coke for me so I could recharge a bit before making my next move, which would be to sit in the creek for a while.

Washing away 62 miles of sweat and grit in the cool water was just what I needed. Eventually, I started feeling normal enough to grab some food from Hobnob’s tent and a Pinner Throwback IPA from Oskar Blues.

We hung out at the finish for a while and I traded stories from the day with other racers. A group of 12 guys had come up from the Atlanta for the race and almost half of their crew didn’t finish for one reason or another. There’s a lot of different ways ORAMM can get you: it could be the heat, a mechanical, a crash, or just the mental toll.

Right after I finished ORAMM, I said it was probably the hardest single day I’ve had on the mountain bike, and I stand by that. Now I’ve had some terrible rides, like Stage 2 of the Trans-Sylvania Epic, but in terms of the toughest course I’ve faced, this has to be it.

It would be nice to have more singletrack on the route, but roads and gravel are often a part of endurance racing, so I’m used to that. The trail that you do get to ride is classic Pisgah, though. You’ll bomb through rhododendron tunnels at mach-chicken. You’ll struggle to find traction over the gnarly roots and rocks covered in Pisgah’s patented mixture of humidity and fine grit. You’ll hope like hell that you can slow down enough to make that next switchback. You’ll curse Curtis Creek Road, maybe even audibly, but you’ll power through because you know Heartbreak Ridge is at the top of the hill.

And as much as you question why you’re putting yourself through all of this, you’ll sign up for it again next year. You and 499 other dummies.

Gear
Get Away from It All with These Bikepacking Picks
Community
Middle and High School Mountain Bike Racing Season is Back!
Community
Rooted Vermont: Business Up Front, Party in the Back—And All...
Gear
New Devinci Spartan Adds High Pivot and Size-Specific Chainstays
Subscribe
Login
Please login to comment
1 Comment
Most Voted
Newest Oldest
Inline Feedbacks
View all comments