Last week the first-ever Fall Cyclofest presented by Interbike was held at the US National Whitewater Center (USNWC) just outside Charlotte, NC. Designed in part to cater to east coast bike dealers who can’t make it to Las Vegas for the big show each year, Cyclofest was also open to consumers on the final two days of the expo. Aaron and I attended the industry days, Thursday and Friday, and here’s what we found at the inaugural event.

The US National Whitewater Center is an expansive facility with a surprisingly diverse and extensive set of trails, well-suited to testing bikes. The permanent facilities, including the visitor’s center, restrooms, and food service facilities were in great shape as well. However, the demo area itself, situated in a large sea of gravel located directly beneath a set of high-voltage power lines, was not well received by the vendors we spoke with. The sound of buzzing power lines and in some cases, shocks from tents and displays, clearly frayed some nerves. Not only that, photos from the event were marred by the sight of the unavoidable towers. 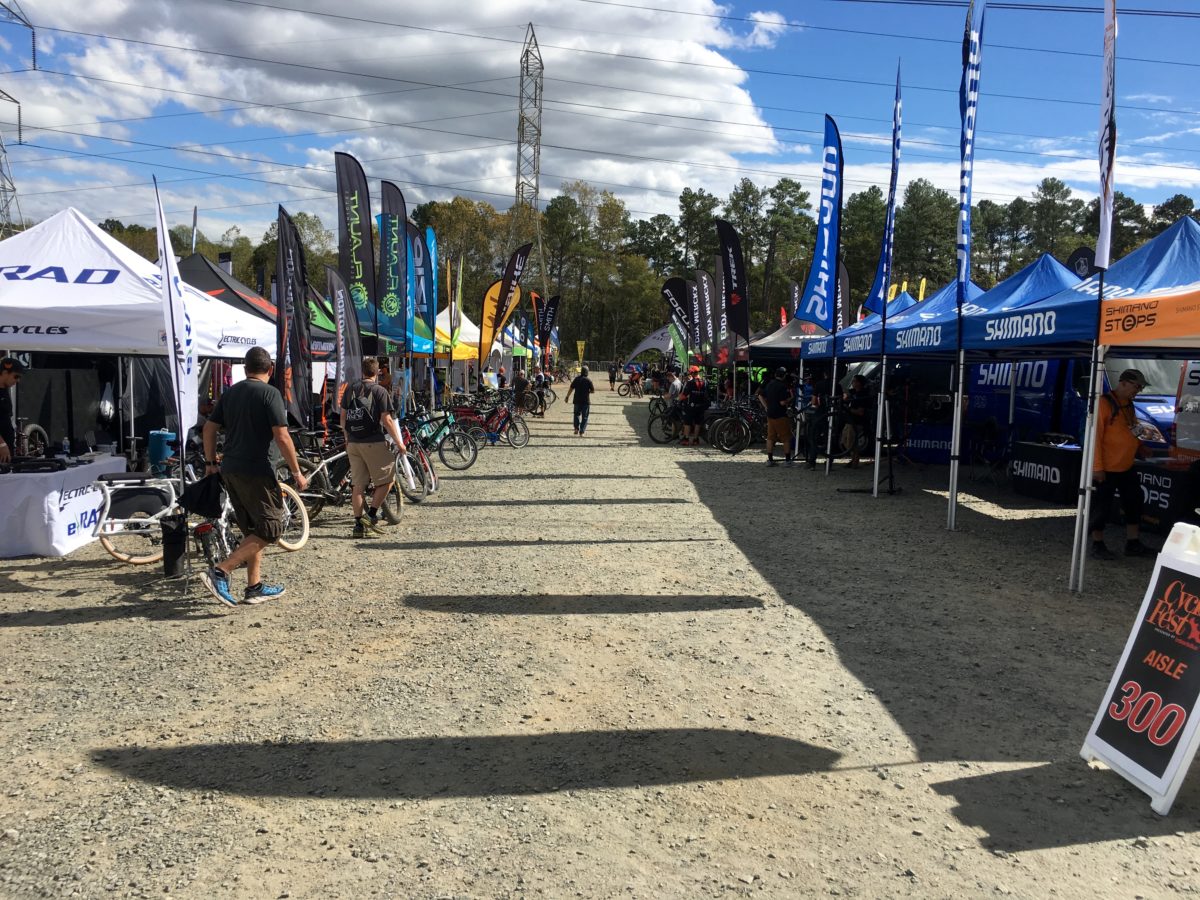 The weather during this time of year is generally quite pleasant in Charlotte, but this year it was unseasonable hot and dry, with highs near 90 degrees on the first day of the event. Clearly no one can control the weather, and mountain bikers will generally take dusty trails over wet ones any day of the week. So for me, the October weather was pretty much a win!

Officially more than 500 retailers attended, along with more than 3,000 consumers on Saturday and Sunday.

One of the big stories out of Interbike this year revolved around the lack of big brands that had attended the event in the past. Fortunately many of those same brands–including Specialized, Trek, Santa Cruz, and Niner–set up at Cyclofest this year. Still, even the big brands had small footprints at Cyclofest. Trek, for example, set up a single 10×10 tent for their demo bikes. Specialized brought a good number of mountain bikes, but we were disappointed to see that all the bikes they brought were electric mountain bikes (does Specialized even market “classic” mountain bikes anymore?).

We also found a good mix of smaller brands at Cyclofest that didn’t make it to Interbike this year, including Orange Bikes and Eleven, a small fat bike brand out of Statesville, NC. Cyclofest is geared toward dealers and consumers primarily, so we didn’t expect to see any new product introductions. However, as working media, we did find the event helpful for connecting with brands we missed at Interbike and discovering new brands we weren’t familiar with.

Aaron reached out to several exhibitors to get their take on Cyclofest 2016, and here’s what he found.

In theory Cyclofest seemed like a great idea but in practice this wasn’t the case. I would’ve liked for the expo to be included with the Whitewater Center, or at least better integrate the two to possibly introduce or re-introduce people to bicycles; instead we were secluded in a dusty gravel lot underneath power lines for four days. Really not too sure what the thought process was there. Glad that traffic picked up on the weekend and the demo fleets seemed to do really well, but ultimately I think Interbike dropped the ball and didn’t do right by their customers, us.

We attended on behalf of Mulberry Gap Mountain Bike Get-A-Way in Ellijay, GA. We were excited about the opportunity to promote our business and support an east coast version of Interbike. The overall traffic was slow for the 4-day event, but we believe we made valuable contacts for future business ventures. As a first time event, no one was sure how it would go and what attendance would look like. There are certainly some areas that needed major improvements, but we’ll try to get back next year.

Cyclofest delivered for ELEVEN; over the four days we engaged industry professionals and [met] a lot of enthusiastic mountain bikers. It has opened doors within the industry and connected us with new customers.

The best part of Fall Cyclofest was greeting riders as they completed a demo. It’s always fun to see the smile an ELEVEN fat bike inspires, but our favorite quote was from the last rider. Before George Lu came to a stop, he shouted “this is the most fun bike I ever rode … I was leaning over so far the trail was scared.”

For us, it was one of the busiest events of the year, rivaling other big festivals like NEMBA Fest, DirtRag Dirt Fest, and the Wydaho Rendezvous. The location of the expo [adjacent] to the well built and maintained trail system meant any company out there with product to demo seemed to stay busy all weekend. We met participants (both industry and consumer) from major cities like Charlotte, Richmond, and Atlanta, but I also met a handful of people from both Ohio and Pennsylvania, which I visit during different times of the year. We had a great time out there and everyone we met that came to ride bikes had nothing but good things to say, and we are already planning to be out there next year!

Although all 4 days felt busy, the numbers showed that the industry days could have been condensed into one and we still wouldn’t have been as busy as either of the consumer days.

The venue was also “electrifying” – at least it felt that way when the high voltage power lines above us created a handful of unique issues for the vendors. If I touched anything grounded on my van, I got shocked.

CycloFest was the perfect place to get riders on bikes and provide them with an experience they’ve been lusting over and waiting on for years. We were able to make great dealer connections, and the interactions with the public only confirmed what we already knew: Orange is a brand with a lot of excitement around it.  We were very pleased with the turnout and interest, and look forward to exhibiting again next year… only bigger with more demos!  The venue was perfect and it will surely grow in 2017.

There’s no official word on next year’s event, though it sounds like the organizers are already looking at future plans. Pat Hus, Vice President of Interbike, says “We received some great feedback from our constituents, and plan to make a number of tweaks to improve the experience for all vested parties.”

My friends and I spent all day Saturday (and most of them came back Sunday) and had the time of our lives. The merch and bikes have never been so accessible. Being able to demo bikes that we dreamed about was insane fun. We all have our next “forever bike” picked out, along with tons of accessories and components.
Sampling power bars and hydration was nice too.
We appreciate this event coming to the Whitewater Center, and are ecstatic about coming to the next one.
Trombone Shorty as the grand finale ended a perfect day for me.
Thank you!!!