The third year of this direct-to-consumer trade show is in the books. Over a dozen bike vendors with tons of bikes were on hand, as well as other vendors with all kids of cool stuff to demo. We got to meet up with Singletracker AK_Dan, all the way down from Alaska, as well as other mountain bikers from all over the country.

The format was pretty similar to last year and you can read Dan’s write-up if you aren’t familiar with the event.

The Outerbike demos open at 9am and run all day until 5pm. Each day there was a long line of mountain bikers queued up and ready to charge to their favorite vendor tent. Michael and I took our time and strolled in after the mad rush, and there were still plenty of great bikes to try in our respective sizes. (Over the next few days, watch for mini reviews of the bikes and products we tested.)

Getting in after the initial rush also gave us some time to chat with the bike company reps, specifically the guys from Felt, Greg at Fatback bikes, the folks from Giant, and especially the reps for Tailwind Nutrition.

If Moab is on your wishlist, and if you like riding lots of bikes and checking out cool new gear, then you should definitely put the first weekend of October on your calendar for Outerbike! Go ahead, I’ll wait.

Ok, you’re back. Here’s how to make the most of your Outerbike trip, as well as what worked and what didn’t for us.

Pretty much any of the lodging options mentioned in my Affordable Moab post will be fine. We stayed at Arches Campground, which is about a mile and a half from the Outerbike venue, and connected by a bike trail. We had intended to ride to and from, but we were too tired and just drove anyway. Arches Campground has the WORST internet service ever, and since we were there to blog about the event, it was a major bummer.

I can’t stress enough: wear your most comfortable gear. Also make sure you bring extras, as it’s hot and dusty in the desert. I brought several jerseys and pairs of spandex, and one super comfortable pair of Funkier Eagle baggies with ample pockets. Also be sure to bring a helmet, as they will not let you demo without one.

As for shoes, don’t bring your awesome carbon fiber racing shoes, as you’ll be spending a fair amount of time walking around. I wore my Keen Austin commuter shoes and they were just the ticket.

The weather can change dramatically in Moab, so it’s not a bad idea to have some cold weather items as well.

Bring your pedals! Most of the vendors have demo pedals, but they may be out of your preferred style when you need them, and the pedals might be worn out or not adjusted to your liking. Just bring your own and the mechanics will gladly install them for your demo ride.

Also make sure to bring a hydration pack. The Outerbike shwag bag will have a water bottle, but most of the bikes do not have bottle cages. And again … hot, dry desert! On this note, however, Osprey was on hand with hydration packs to demo … Brilliant! (I brought my spare Camelbak for Michael but forgot the cover. Osprey saved the day.)

In your pack, you should have the same tools and flat repair stuff you carry at home. We saw several people walking their demo bikes back to the venue with flat tires or other simple issues that could have been fixed trailside. Carry a 26″ tube, as it will work in 26, 27.5 or 29er tires. It’s also a good idea to pack a mini pump and maybe even a shock pump. ALL the vendors set up their tires with too much air (to avoid flats) and a couple got the shock pressures way off.

Outerbike provides an ample lunch and various trail snacks. Eat a reasonable breakfast and you’ll be set until supper time.

Getting the most out of your demo rides

I already mentioned avoiding the initial rush. Once you do make it to a vendor’s tent, BE NICE! Most of the staff were friendly and extremely helpful, but a couple seemed a little frazzled by the mad dash of demo-crazed mountain bikers. If you want to talk in depth about anything, DON’T do it when there’s a huge line. The traffic seemed to flow in waves,  so it was easy to come back and bend someone’s ear when things were quiet. 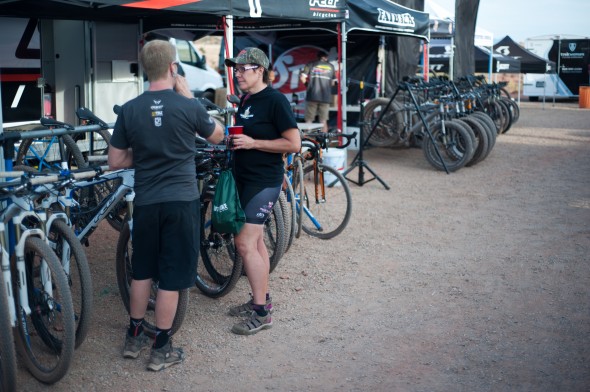 Know your size. This is a pro tip from Michael: on your personal bike, measure the distance from your pedal at the bottom of its stroke to the top of your saddle. Then when you walk up the demo tent, just tell them your ‘pedal to saddle’ length and they’ll set it. Done.

However, don’t argue with the mechanics. All the people wrenching on bikes were excellent, and some were even pro team race mechanics. I insisted on a small at the Turner tent, but the mechanic was sure I’d be most comfortable on their medium. He was right.

On a related note, if they don’t have your size, wait. Riding a bike that doesn’t fit doesn’t give it a fair shot and can lead to an unfairly bad impression.

Some bikes are approved for offsite demo, some are not. Don’t assume, just ask. On the first day, a bunch of people grabbed demos and headed out on the shuttle van, effectively preventing anyone else from getting a turn that day.

Heavy cameras are a drag. By the third demo lap, Michael and I were both sick of lugging around his full frame SLR. We ditched it and resorted to smartphone cameras.

Don’t set your pedals down while talking to a vendor. I did that and walked off without them. Twice. After the second time I found out that they fit nicely in the front pocket of my Funkier shorts. Problem solved! 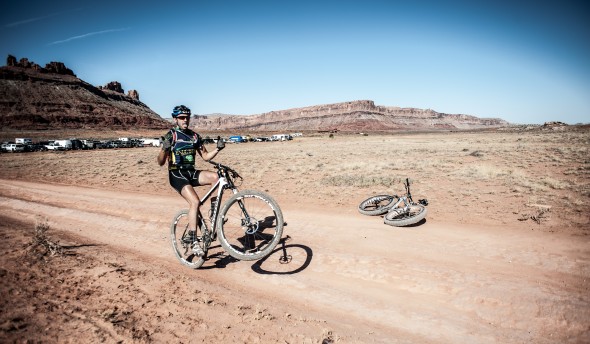 The real goal is to just have fun. Don’t over plan. Don’t freak out if the exact bike you want to demo isn’t right there at first. Don’t be mean to the bike company reps or other riders. Just CHILL … you’re on one heck of a vacation!

Sounds like another great Outerbike! These tips are super helpful for any demo event… Interbike, Southeast Bike Expo, etc.

My favorite: waiting until your size is available in a demo bike. My first year at Interbike I settled for demoing a couple bikes that weren’t quite my size and it was an awful experience.

Looking forward to your product reviews!

Sounds like a blast! I’ve done a couple ski demo days and most of your advice holds true there as well–except for the part about bringing pedals!

BYOB? (Bring Your Own Bindings) 😀

I have avoided demo days in hopes that it won’t wet my appetite for what I want to eventually purchase.

But I do appreciate this post as there were things I didn’t know about. Very enlightening for us demo n00bs.