Bent Creek has been on my ride wishlist for a very long time. I’ve heard so many rave reviews of this trail system that my mouth started to water at the mere whisper of the words “Bent Creek,” but I had yet to taste the sweetness for myself. Until now.

I had the opportunity to ride Bent Creek a few weeks back when the leaves were almost at the peak of their color but before they had started to seriously cover the trail–perfect timing!

Bent Creek is the go-to trail system for the greater Asheville area, and with the deeply-ingrained mountain bike culture in the Asheville/Brevard area, and Western North Carolina in general, Bent Creek sees a ton of traffic. There are several different trailheads and ways to access the trail, and the Saturday I was there they were all filled to overflowing. Cars that couldn’t fit into the parking lots lined the nearby forest roads, and Lake Powhatan Campground was filled to capacity the night before. This might be the busiest mountain bike trail in North Carolina… and as you’ll see below, there’s good reason for the attention!

Since this was my first time here and I didn’t have a guide, I had no idea what to expect or where to go… so I just started pedaling. I found myself on the easier beginner trails near the lake and the campground. This area had a few small rolling hills, but looking toward the other side of the trail system I soon realized that the singletrack I was following lay solely in the flat area, and that Bent Creek had a whole other side to it.

Still, the flatter singletrack was well-built, very flowy, and non-technical: a great warmup for a big day, or if you’re new to the sport this would be a great place to learn and train.

After scrutinizing the maps on my phone and at the trailhead kiosk, and reading some of the reviews on the website, I surmised that I had to hit the Green’s Lick trail. The only question was, what’s the best way to get to the top?

Again, after reading some reviews using the Singletracks iPhone App, I decided to climb Ingles Field Gap and Wolf Branch to get to the top of the ridge. As soon as I hit the beginning of the trail, I realized that this trail system really was composed of two polar opposites. After flying along the flat, rolling trails for an hour or so, it took me a couple of minutes to get back into the grind-climb mindset.

Once I settled into my rhythm, I realized that the climbs were steep and long–but not too steep as to be unrideable. In fact, Ingles Field and Wolf Branch were some of the best singletrack climbs I’ve ridden in a long time: challenging and entertaining at the same time! As I climbed, I decided these trails would have been even more fun as descents: there were tons of massive berms, wall rides, and jumps spread along the length of the trail. 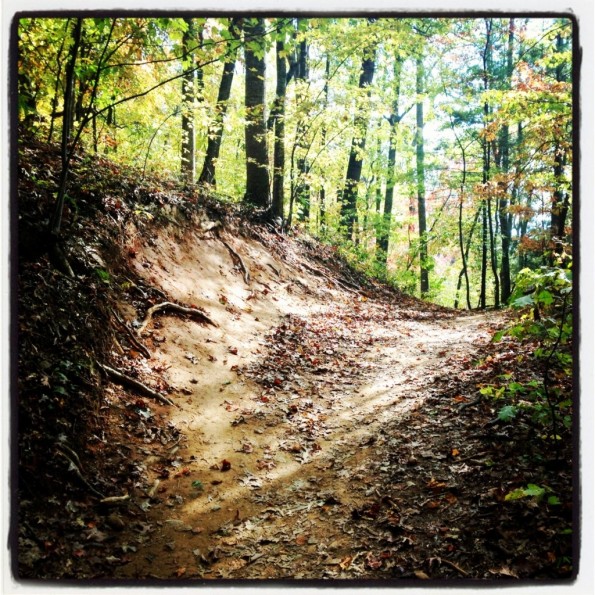 Finally, I made the top of the ridge, and was rewarded with an awesome view of the surrounding mountains: 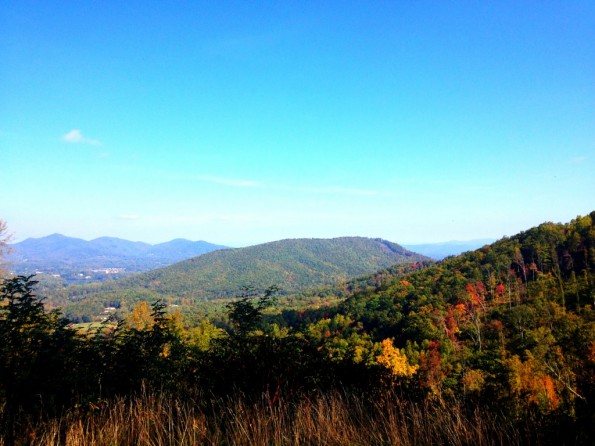 After a wrong turn and a descent halfway back down the mountain and a stiff climb back up, I caught the correct trail (North Boundary Road / 135) up along the ridge line to the top of Green’s Lick. I dropped the saddle on the Airborne Goblin 29er I was riding and let ‘er rip!

Green’s Lick was everything it was rumored to be: very fast, flowy, jump-filled, full of massive berms and wallrides to rail (even bigger than those on Ingles Field Gap and Wolf Branch), and absolutely no respite until you reach the bottom!

I was also a little surprised to find that there were several rock gardens and other technical rock features littering the trail, but after talking with some locals I got the full story. Apparently, Green’s Lick used to be so smooth and so fast that riders would go careening out of control and off the trail on a regular basis. The local EMTs were constantly hauling injured riders out of the woods, so, the masterminds behind the trail system decided to put in numerous technical rock features in the middle of the trail at various intervals in order to slow riders down. I thought that was an interesting choice. Of course, the rocks might achieve that result, but they could also have the exact opposite effect and cause even more injuries. Only time will tell I guess.

This might be a cause for additional confusion, as Pisgah National Forest is nationally, and even internationally, renowned for its uber-technical backcountry trails. Bent Creek, on the other hand, is an entirely different breed of singletrack. Most of the trails here are purpose-built mountain bike trails, complete with berms, jumps, and other features. On average, these trails are very non-technical and can be handled on a hardtail with ease. The only trail that I wished I had a full-suspension rig for was Green’s Lick, but even on a hardtail 29er I managed to tear it up pretty well!

Compared to the rest of Pisgah, Bent Creek is cake… but it’s delectable German Chocolate cake!

Your Turn: Have you ever ridden Bent Creek? What’d you think?

Great pics–Bent Creek is amazing this time of year!

Interesting note about the tech sections on Green’s Lick. I actually went off the trail in a rocky section last year (see this video). Was definitely going too fast but I probably would’ve been going faster if not for the rocks!

My favorite camping/trail combo to date. The bike shops near the trails were very welcoming and the campground staff were accomidating. There are trail heads a 9 iron from the campground, and the connectors put you out at the campground, after a descent-almost like it was planned-crazy..

I live right here in Asheville and these are the trails a ride all the time. Your right in the fall it is absolutely beautiful until the leaves start falling and become kind of a nuisance, but they get cleared off some of the trails because all of the traffic. I love the trails here and its a great area mountain biking.

Man, I rode this place on the first day of this year–New Year’s Day. The place was packed just as you mentioned. I must say the climbs were difficult (I had to pause a few times), but the climbs were well worth Green’s Lick. That trail was a total blast, and Ingle’s Field, and Wolf Branch were definitely fun to ride down too. I honestly didn’t think any of what I rode was all that technical, but the place had a great flow (which in my opinion is the best part of MTBing). I have got to make it back to this place some time.

Bent Creek is a great trail system. Have ridden there many times and always try to work it in whenever I’m in the area. I tell ya though, there’s a new trail system to the north in Boone, NC that is just starting to get on many mtbr’s radar. Rocky Knob Bike Park! Someone from this site should do a review. Between RKP and Wilkesboro’s trails, the quality of the trails rivals anything that Pisgah has to offer and is about an hour closer to most folks in the central part of NC.