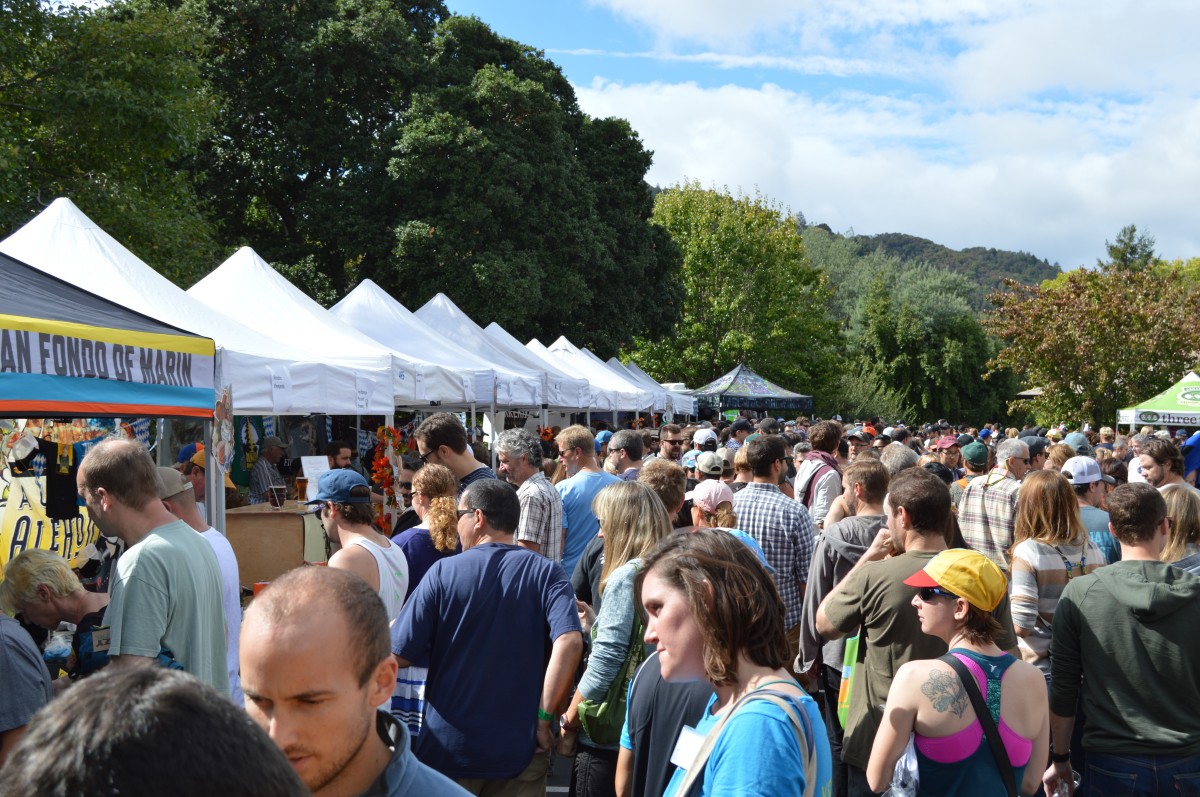 This year’s Biketoberfest—a celebration of bikes and beer in Fairfax, California—got under way with riders heading out onto Marin’s world-famous roads and trails under ominous skies. By the time they returned, the sun was making intermittent appearances and the small town had been transformed. Every year since 2002, this cycling hub, the birthplace of mountain biking, hosts 4,000 folks with a love of bikes, beer, food, community, music, and fun. With 35 beers on tap from 20 West Coast breweries, vast bubbling paella pans the size of chariot wheels, thin crust pizzas, and of course German sausages, nobody would leave hungry (or sober, but that’s another story).

The event is a fundraiser for two Marin County organizations working to improve bicycle access and safety on Marin’s roads and trails—the Marin County Bicycle Coalition and Access 4 Bikes. The silent auction tent—not so silent due to the adjacent jamming of The Mother Truckers, Danny Montana and the Bar Association, and Full Soul Jackets—featured fine wines, high-end bike accessories and clothing, certificates to local restaurants, artwork, bicycles, and more.

I headed out with the dirt crew for a Tamarancho loop–a 12-mile singletrack just out of town at the Boy Scout Camp. This public-private partnership has served local mountain bikers well for nearly 20 years, and a new (2013) flow trail has recently been added to its repertoire. Hand-built bridges, berms, whoops, and one alien (wearing a helmet) are all a part of the short but sweet trail whose name is Endor. Our group of 30 featured the usual suspects in terms of bike make and model, but also included some funk-mobiles; a long-travel rig with panniers, a barely dirt-legal hybrid with way-too-skinny/smooth tires, and one impressive tandem ridden by veteran dirt advocates Jim and Cathy Haagen-Smit.

Several other large contingents of riders were out on the trail working up their beer and brat appetites, and at one point we were enveloped in a cloud of purple as the Liv Chix swarmed us (these ladies will be the subject of a future post, all to themselves–that’s how awesome they are).

I was told when I got this Singletracks gig that I’d need to become proficient with a camera, and that was kind of mortifying. Attempting to fulfill this commitment, I spent half of my ride lurching ahead, diving off the side of the trail, throwing my Camelbak down, and fumbling for the camera before my subjects arrived. Toward the end, a rider I was snapping said to his pal, “I wonder if that’s for a mountain bike magazine…” I was so stunned that they didn’t interpret what they saw as, “Look, some lady with a camera fell down!” that I hesitated for a second before proudly saying “Yes! It is for a bike magazine!” to their retreating backs. I was very pleased to catch up with them later and tell them that I was writing for Singletracks.

“Oh cool! We love Singletracks!” they responded. So there ya go.

Twenty breweries and as many vendors had set up shop by the time I rolled back into town. Mike’s bikes, the Drake High School mountain bike team, Kitsbow, Sonoma Marin Area Rail Transit (who promises a 70-mile trail with their rail connecting our county with our neighbor to the north… but that’s another story), Golden Gate National Parks, Calfee, Osmo, Niner, Marin Museum of Bicycling and Mountain Bike Hall of Fame, Clif Bar, Mini Cooper, Marin Bikes, and many many more, were anchored by the following beer purveyors:

Voting for best beer was achieved by dropping your teeny-tiny playing card into the bin of your favorite, which were tallied at the end. Iron Springs Brewery won 1st place (a little hometown bias? Maybe… Iron Springs is the pub of record in Fairfax, and is also the name of the road by which Tamarancho is accessed), 2nd was Baeltane, followed by Berryessa, Lagunitas, and South City Cider. All of these breweries are pretty-darned local, and though the most local one won in the end, isn’t every beer a winner?