I wake up from a nap next to my fully-loaded bike. I hear Big Dave rustling and I get out of my bivy. I needed the nap to at least attempt the last push up and over the very difficult climb into Martinez Canyon and eventually Picket Post Trailhead. It’s about 1:00am when we awake from our quick 30 minute nap just along the the Gila River.

Ross comes strolling along, says his knee is “in pain,” and he’s going to ditch out on the 750. But by the looks of it, he is determined to finish. He pushes on but eventually we would pass him as he took a nap. It is dark, the moon casting shadows of saguaros and bushes in my periphery. Two AM turns into 3:00am and it feels like I only went about a mile.

Dave, on his single speed, just keeps pushing and I follow in his tracks. I attempt as many climbs as my poor tired legs can handle before I succumb to each individual climb and walk the rest. It’s an ongoing theme for hours upon hours. Dave remains almost entirely in front of me through the climb, his lights motivating me to stay close. He did the AZT 300 last year so he kept telling me about this section, and how it would never end–and he’s right.

Four AM turns into 5:00am and finally we reach a spot where there’s a fence. I take a load off and know we are close but Dave keeps telling me how taxing the downhill will be. All I want to do is go downhill, and finally we begin the descent. The sun says hello and soon it’s bright enough to turn off my already dim lights.

I brush off Dave’s comments, thinking it’s going to be cake riding down to the Picket Post Trailhead, but that is not the case with rocks, short climbs, and more mileage in front of us. I keep looking up just hoping to see a car, bathroom, or something other than another ridge. Finally I see cars and a few minutes later I reach the trailhead, where I see Dave sitting on a lawn chair watching me finish while eating bread and butter. My first bikepacking race is in the books! 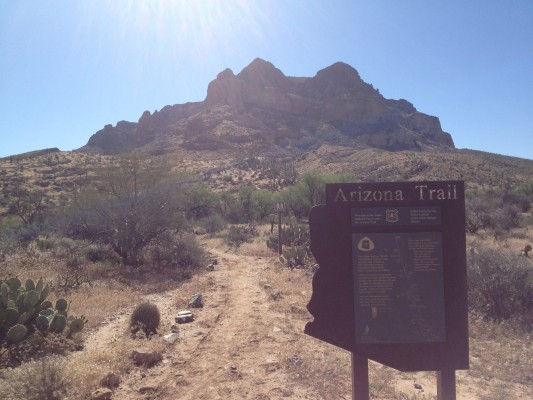 Picket Post Trailhead, the finish line of the AZT 300.

The Arizona Trail Race is an “unofficial challenge” that is held along the Arizona Trail each spring. There are two options: a 300 miler or 750 miler. I would be riding the 300.

The night before the race began my girlfriend Lindsay and I made it to the Parker Canyon Trailhead. We used my new eTrex GPS, which I had been trying to get used to for the better part of the winter, to pull up the AZT 300 track and find the trailhead. There were only a few racers and families camping at the trailhead, and we joined them. After setting up camp, I started to sort out all my gear and get packed for the 9:00am start the next morning. I was nervous, and needed to get to bed for my last full night of sleep for a few days. Predictably my sleep was interrupted by thoughts of the adventure to come. 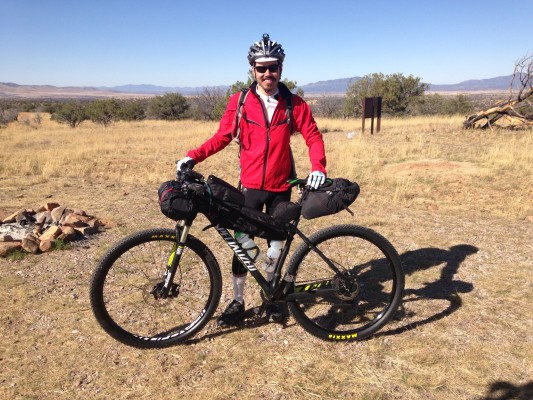 My rig and I ready to hit the Trail. 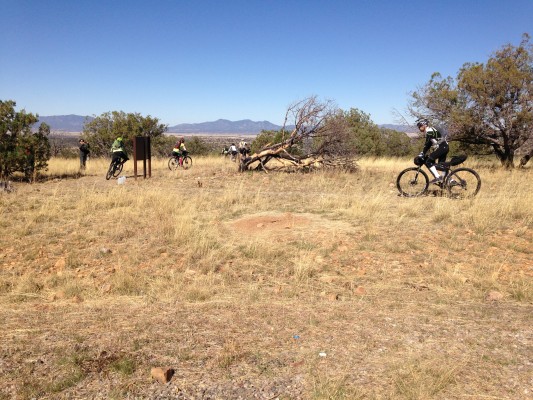 Race day was finally here! All the planning, hard work, and a little training had come and gone and there wasn’t much left to do but get on the bike. As we got going, everyone was bottle-necked as I expected and my goal was to just stay up front. I was following Estzer for most of those first 30 miles and she was setting a good pace. Once I got to Harshaw Road and eventually Hwy 82, I noticed my fork stanchions were only showing about half the travel they should be showing. This was not good.

I made it to the Sonoita gas station to resupply on food and water and asked around for a shock pump. Luckily, someone had a pump so I was able to check and see if the fork was holding air. The pressure was to my liking and the fork was holding air, but obviously something was still wrong with the fork. I loaded up some food, scarfed down a turkey and swiss sandwich and chugged some coconut water. I continued on with limited fork travel and panic started to set in. 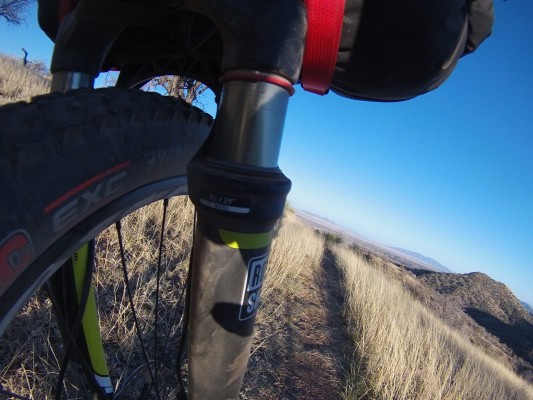 My Broken fork showing about 30mm of travel.

I was enroute to Kentucky Camp with a lot going through my mind. I started to vent to some of the other racers to help me decide what to do. Should I really bail after months of preparation, not to mention the long haul from Colorado? I really started to lose speed and Luke, Casey, Estzer, and others would all pass me.

Lucky I had cell service, so I decided to call all the shops in Tucson that were reasonably close to the trail. All the shops were booked and could not even take a look at my fork until Tuesday (4 days away). I tried to pull the “extra money card,” but to no avail. The only silver lining to my current situation was that my fork was still holding air, meaning it was not totally useless. I decided to keep pedaling, get some rest, and plan to head to the closest bike shop in Tucson the next morning. My plan was to push on to La Selvilla Picnic Area that night, where there was a spigot and a bathroom.

Sundown came and went and before I know it was 10:00pm. Somewhere between Kentucky Camp and Sonoita Hwy I heard air escaping from my rear tire. I knew I hit a sharp rock and sure enough it slashed an inch-long cut in my sidewall. Time to get the thread and needle out!

I slowly and carefully sewed the slice shut, making sure to keep my tire seated to the rim. The goal in a race like this is to keep your tire tubeless. With all the cacti and thorns on the trail, your tire is extremely vulnerable to punctures. I continued to sew up the slice, but of course on my final stitch I broke my needle. I was rushing a process that should never be rushed. I put some superglue and a bit of dirt on the stitching.

I attempted to ride on it, but the tire would not hold air. I added more superglue and rotated the tire so the Stan’s was covering the slice completely from the inside. I put the tire back on my bike and attempted to ride the bike, while being as delicate as I possibly could. It worked–my first ever tire surgery a success! The slashed tire had set me back an hour and I had quite a lot of ground to cover before La Selvilla Picnic Area. After some very fun night riding I finally arrived to the picnic area around 2:00am, my fork with slightly less travel then earlier in the day. 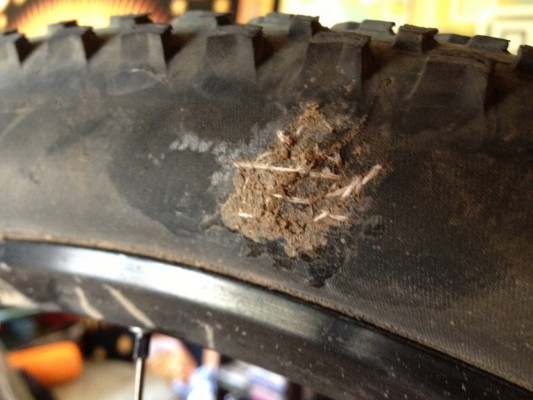 My tire after the race. It held up pretty well.

Great job on the tire repair, and finishing this event! Looking forward to rest of the series!

The AZT Race has been on my to-do list for several years now, though my plan is to stick to the BACK of the pack instead of the front. 🙂 Nice job!

Big gash in the tire AND a fouled fork. Sound like you kept your composure better than most. I know you’re already done, but with regard to future installments, I’m pulling for you to have better luck!

AZ seems to be getting a lot of coverage lately!

Unbelievable. Never heard of such a tire surgery before. Glad you made it to the finish despite all the technical issues you had. Waiting for the next part to read

Sorry to hear about all of those difficulties! Sounds pretty miserable, but you seem positive which is good!

Looking forward to the rest of the series!

It was roughly the 100 mile point of the race. I had no set goals of getting there prior to the race I just figured it would be a nice spot to camp.

I was really bumming about my fork, lots of DNF thoughts going thru my mind…..I could not live with myself if that would have happened.