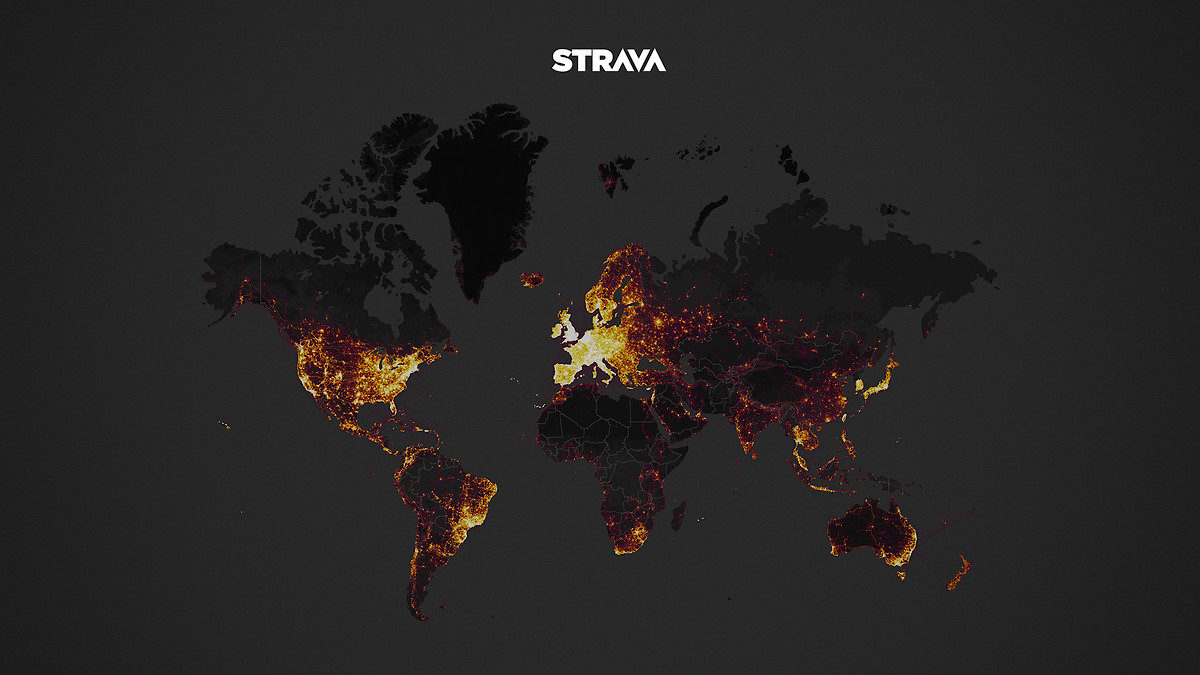 I’ve been addicted to Strava’s Global Heatmap for years, using it to discover all kinds of obscure mountain bike routes and to dream of epic bikepacking adventures. Released in 2015, I’ve been longing for new-and-improved data. After all, Strava has been accelerating at an incredible pace, adding millions of users and extraordinary features over the intervening years.

Finally, they came through! In November Strava released a completely revamped multi-discipline heatmap that incorporates 1 billion different activities from 10 million different athletes, According to a press release from Strava, the new map “boasts six times more data than the original version in 2015.”

Exactly how much data is incorporated into this map? Yes, 1 billion activities… but what does that mean? Put another way, “the Strava community has generated more than two-hundred thousand years’ worth of activity that cover nearly 17 billion miles,” according to the release. Those 1 billion activities include 3 trillion latitude/longitude points, totaling 10 terabytes of raw input data. 12 trillion pixels were rasterized to create the map, and over 5% of all land on Earth has been covered.

“A global community can seem very abstract until you see its activities visually represented in your immediate location and across the world,” says Strava CEO James Quarles. “It’s not just runners and cyclists, either – skiers, hikers, kiteboarders and even mountaineers on Everest are all counted in the more than 1 billion uploads of the Strava community.” 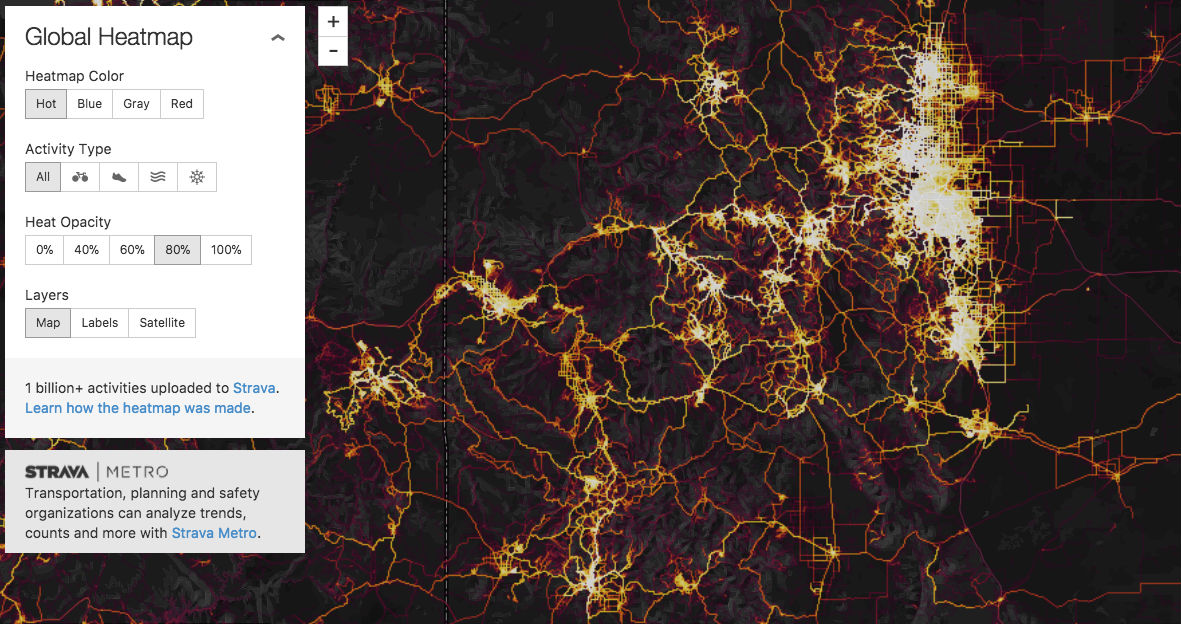 This leads us to the biggest change to the heatmap: it’s now a multi-sport map. You can now view all sports overlayed on the same map, or toggle the map to only display biking, foot travel, water sports, or snowsports. Strava envisions this new map with these new features will allow athletes “to find new places to play.” 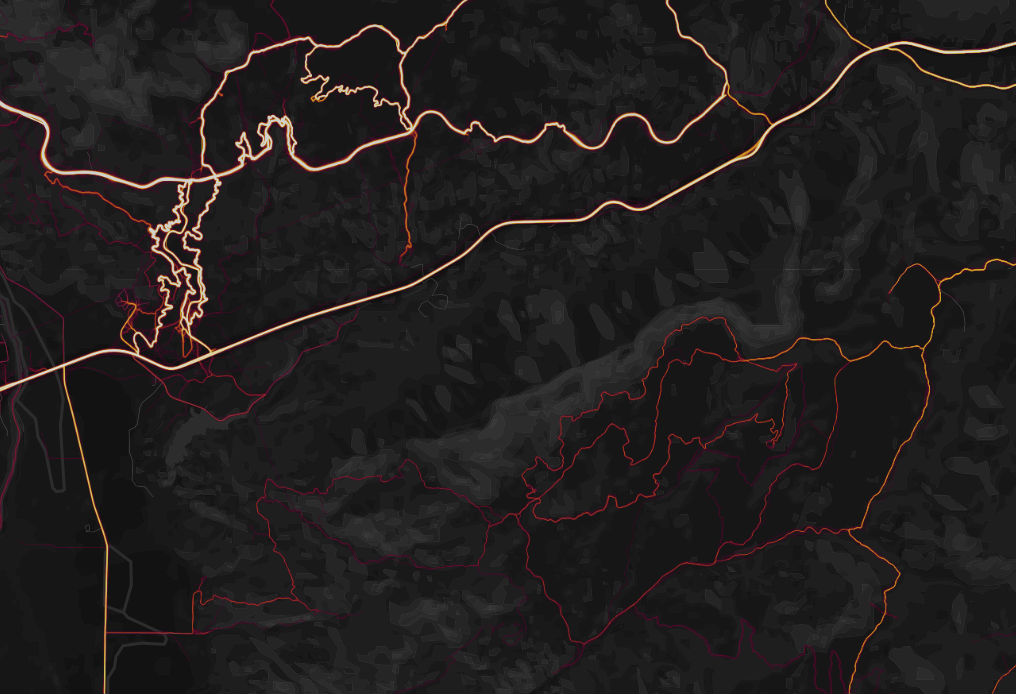 As we discussed above, the new heatmap incorporates many more activities than it did before, meaning the map is now much more filled in and more accurate than ever before. Places where there were no tracks on the old heatmap now show faint lines even on little-used trails.

Obscure 4×4 roads and nasty hike-a-bike doubletrack trails are now showing faintly on the map. While one may have to zoom in a long way to see those lines, most often at least one rider has traveled that road or cow path on their bike… and uploaded it to Strava.

I’ve often used the old Strava heatmap to concoct obscure and innovative connections between popular trails for creative loop rides. While usually those rides turn into Type 2 fun, I’m all about exploring new places on my mountain bike, and the new heatmap promises to help me discover even more obscure routes to ride.

One major concern with the heatmap is the discovery of illicit mountain bike trails, or exposing the poaching of trails that are off-limits to mountain bikes. While riders marking such rides as “private,” refusing to record them at all, or simply choosing not to break the law (the best option) would prevent this from becoming an issue, with roughly 8 million mountain bikers in the USA alone, illegal rounds are bound to show up on the map.

While I can confirm that identifying illicit trails is extremely easy to do, discerning whether or not mountain bikers are poaching sanctioned trails is next to impossible. Just because someone recorded an activity with Strava, marked it as a bike ride, and left it public doesn’t mean that it actually was a bike ride.

Take, for example, the above screenshot of my local ski resort, Monarch Mountain. This screenshot is of the heatmap filtered to just bike activities. While Monarch does host one fat bike race per year and you can legally ride the Continental Divide Trail through the resort in the summer, Monarch does not (and never has) run their lifts for summer mountain biking. And yet, you can clearly see the straight lines of the chairlifts on this map. Apparently, numerous Strava users recorded their downhill ski activities and marked them as a “bike ride” to generate this map.

For another example, consider the trail in the center of the screenshot above. This is the Mount Yale trail, leading to the top of one of Colorado’s famous 14ers. The catch? It would be absolutely-heinous to attempt to mountain bike this trail. The other catch? It’s in a Wilderness area and is off limits to mountain bikes.

Now I don’t think that these people actually rode Mount Yale on their mountain bikes. Like Monarch Mountain above, I think they just incorrectly uploaded their hiking activities to Strava as a bike ride.

It is possible that based on this mislabeling of data, the authorities could analyze Strava’s Global Heatmap and think that riders are poaching hiking trails. However, as this analysis proves, it’s impossible to accurately draw that conclusion from the current data. The increase in data in the revamped heatmap–and the associated lack of correctness–obfuscates the activities of a few bad apples.

Maybe some people are poaching trails, maybe they aren’t. But you know what? Now nobody really knows!