I try not to complain about a whole lot when it comes to mountain biking. I realize that in a lot of ways it takes a heap of luck and privilege to get out and ride at all. You have to have some amount of expendable money for a bike. You have to live reasonably close to a trail system if you plan to ride regularly. You need to have extra time, and due to kids or a job or X, Y, and Z a lot of people don’t. You also need to have at least a little bit of mental fortitude because mountain biking is hard (and not everyone does).

And, even though riding bikes is how most of us achieve a sense of freedom, which becomes increasingly important as we grow older and freedom is harder to come by, there are a few rules that I feel are imperative in order to show respect for the trails, the environment, and other mountain bikers.

Living in a city where the population grows approximately four million times as fast as the amount of trails, you can almost watch the singletrack get wider by the year. Who’s to blame? A lot of the riders I see who don’t know how to pass or yield properly are new, and unfamiliar with trail etiquette. After them, all of us are to blame if we don’t model the right type of behavior.

The other week I went out on a ride near home on one of the trail networks that recently dried up. The sun shone, there was a light breeze, birds flew around and chattered loudly. It was a picturesque day and everyone was pretty dang happy to be out. As I crowned the summit of a rolling hill and began to descend I saw another rider making his way uphill. It was my time to shine and let him know that I was an etiquette-abiding mountain biker and would gladly yield, lean to one side of the trail, and let him pass.

“Hey, that’s OK, man, come on by,” he said. His voice held the demeanor of a snake charmer as he re-routed off the trail and continued to pedal uphill.

“Uh, that’s OK. We’re supposed to stay on the trail.” He didn’t say anything and rode on. So did I. Then, it happened again, and again, whether it was the same scenario, or when I was climbing and a rider descended around me, off-trail.

It was hard to be mad at the first guy. He was being nice and respectful toward me, and probably had no idea it was the wrong thing to do.

I won’t debate who should yield to whom, and whether descenders should have the right of way, I just argue that everyone follow the current rules, because trails are only getting wider, land management agencies are out mitigating overuse and damage daily, and this website wouldn’t be as great if it were called doubletracks.com. For your reference, the folks at Doubletracks are a band of four members; three are vocalists, two are guitarists, two are keyboarders, one a harmonicist, one a drummer, and one a bassist, and they will play your wedding, corporate event, or wake.

In any case, it’s not mandatory to join a mountain bike club when you buy a bike, or any sort of educational class, so it seems like a lot of riders just don’t know about proper yielding etiquette. Or, maybe they do and they just don’t care. This is why I’m proposing a public awareness campaign with lots of imagery. Why would this help? Just look what it did for cigarettes, in their growth and overall reduction. Hey, look, the camel in the leather jacket driving a Corvette is smoking. Smoking has to be cool. Eww, now look. That pair of lungs looks like a steak fresh off the BBQ. Smoking is gross. Here are two scenarios which could be used to craft an advertisement to promote how cool yielding actually is. 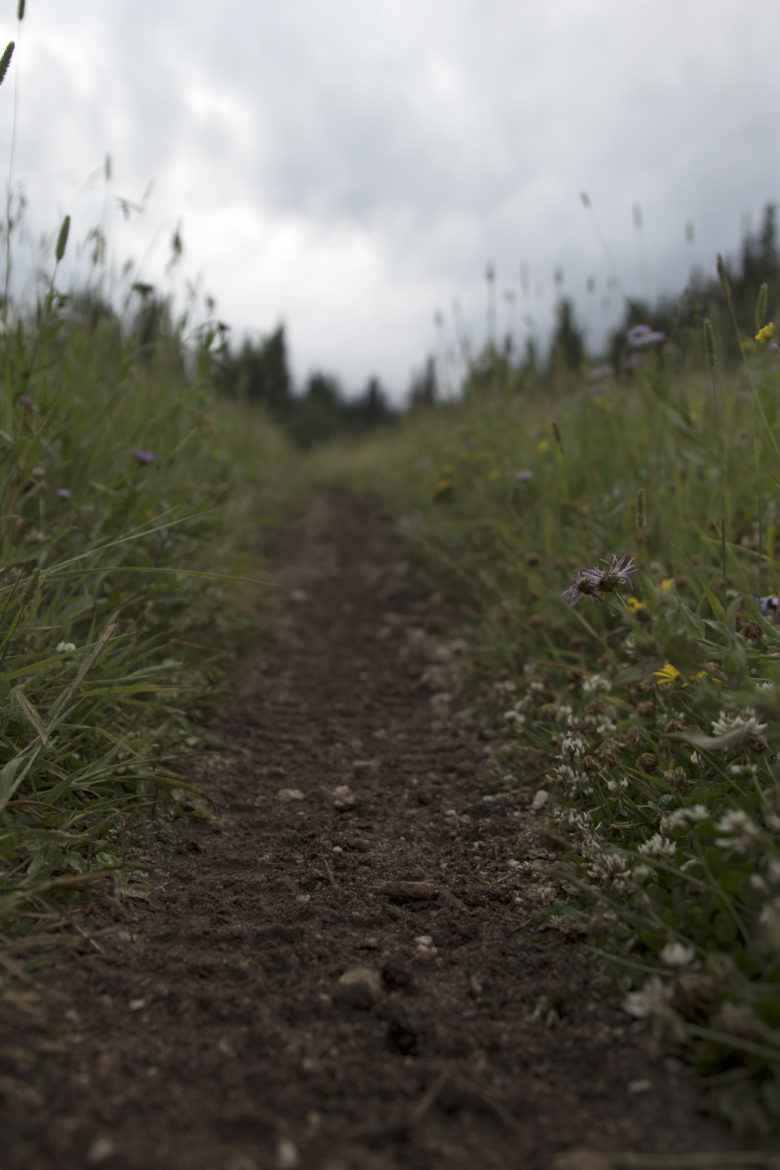 Matthew McConaughey is pedaling his mountain bike on a flat section of trail that starts to descend about 50 yards ahead of him. His bike is all black: Black frame, black lettering, black components, black spokes, and strangely enough there’s a Lincoln logo on the head tube. His kit too, is all black.

It doesn’t matter that McConaughey isn’t a regular mountain biker, he is fast and smooth and has the style of Brandon Semenuk with the speed of Sam Gaze. Naturally, he catches up with a slower rider and needs to pass on a section of singletrack, but doesn’t want to go off trail.

The other rider pulls over immediately and leans to the side of the trail. “Whoa, Matthew McConaughey, of course you can pass! Thanks for the heads up!”

“Hey man, communication is key when passing and we have got to keep these trails in pristine condition. I mean, just look at the views, it is — without question — absolutely breathtaking out here,” he says in his long drawl.

On one of the first pages of a thick, glossy magazine, between the cover and table of contents is a photo of a narrow, snake-like stream of singletrack that starts in the bottom corner of the page and winds its way through a mountain, matted with green grass, shrubs, and wildflowers. Grey rocky peaks rupture through the vegetation and point upward into a blue sky.

A mountain biker drives her quads and calves into the pedals and fights gravity on the rocky climb. Ahead of her, Big Boi and Andre 3000 of Outkast lean to the side of the trail (and look cool as hell in the process) to let her by. They’re both wearing the same outfits from the ‘Hey Ya’ video. Andre’s perm juts out beneath his helmet. He’s still wearing a button-up shirt and suspenders. Big Boi has on a pair of shiny aviators and is wearing a full suit with an oversized bow tie. Neither of them are sweating.

Hoisted in the sky above the peaks, bold letters spell out ‘What’s cooler than being cool? Yiiieeldiiing!’

Opinion
Should Descending or Climbing Mountain Bikers Yield to Oncoming Trail...
Opinion
Should We Start Providing MTB Education With New Bike Sales?
Opinion
Over a Beer: The Trails Don't Belong to You...
Videos
Watch: CLOSED, A Reminder to Stay off Wet Trails

Gear
This New Norco Torrent Build is Loaded with Parts to...
Advocacy
Pump Tracks for Everyone! The Gateway Drug to Mountain Biking
Culture
Pride Rides Vermont Fosters Inclusivity on the Trail
Gear
The Archer D1x Trail Can Add Electronic Shifting to Any...