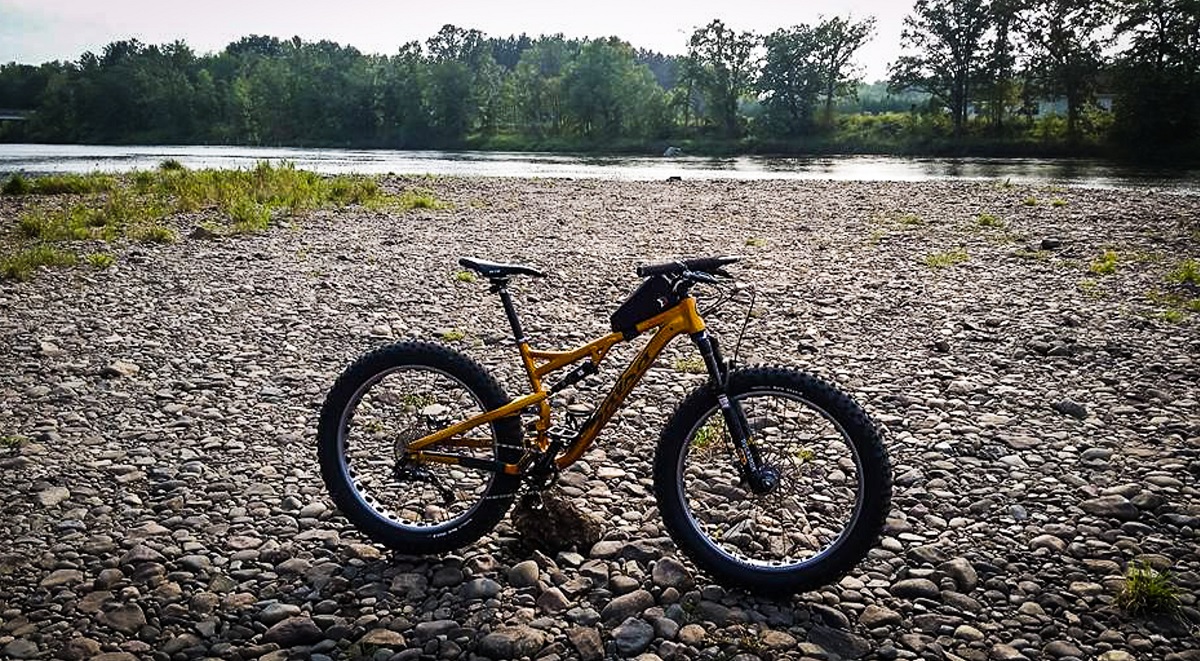 The text was from 6 in the morning. Early morning texts like that are never good. “Yes… why?” I replied.

“Somebody stole my Bucksaw last night.”

I climbed out of bed so I wouldn’t disturb my wife and went to the next room to call Chris. He answered immediately. “They ripped it right off my rack.” His voice was tired and strained. There was a hint of anger, but mostly just a burden. His voice said, I just don’t want to deal with this right now…not ever.  What a bunch of BS!

I knew what he was experiencing. About a year ago we had a Salsa Beargrease stolen from our retail store in St. Croix Falls. They broke in at night and took it along with some other small items. With a theft like this, there are consequences beyond the immediate financial burden. For weeks, our employees felt creepy in the store, like our sanctuary had somehow become unsafe.

“At a friend’s house by South Middle school.”

This was in Eau Claire, WI, in one of the supposedly “best” neighborhoods of the city. I didn’t ask him if he had it locked up. The question is irrelevant. People aren’t allowed to take things from you. If a friend ever calls telling you their bike got stolen, do not ask if it was locked up. If a friend gets his car stolen you don’t ask if the doors were locked now do you?

Chris is a good man, he’s a good father, hard worker, and organizer of the Skull-N-Bones Gravel challenge. The Skull-N-Bones is a gravel century ride, and Chris puts it on at considerable expense to himself. I see him fret about this ride year-round. He’s always worried about rider safety and the overall experience. He’ll call me with questions, and he even took this whole week off to prepare for the event. Just to be nice, I put an ad for his event in the mailer we send out for our Fat Bike Race. Chris was psyched: 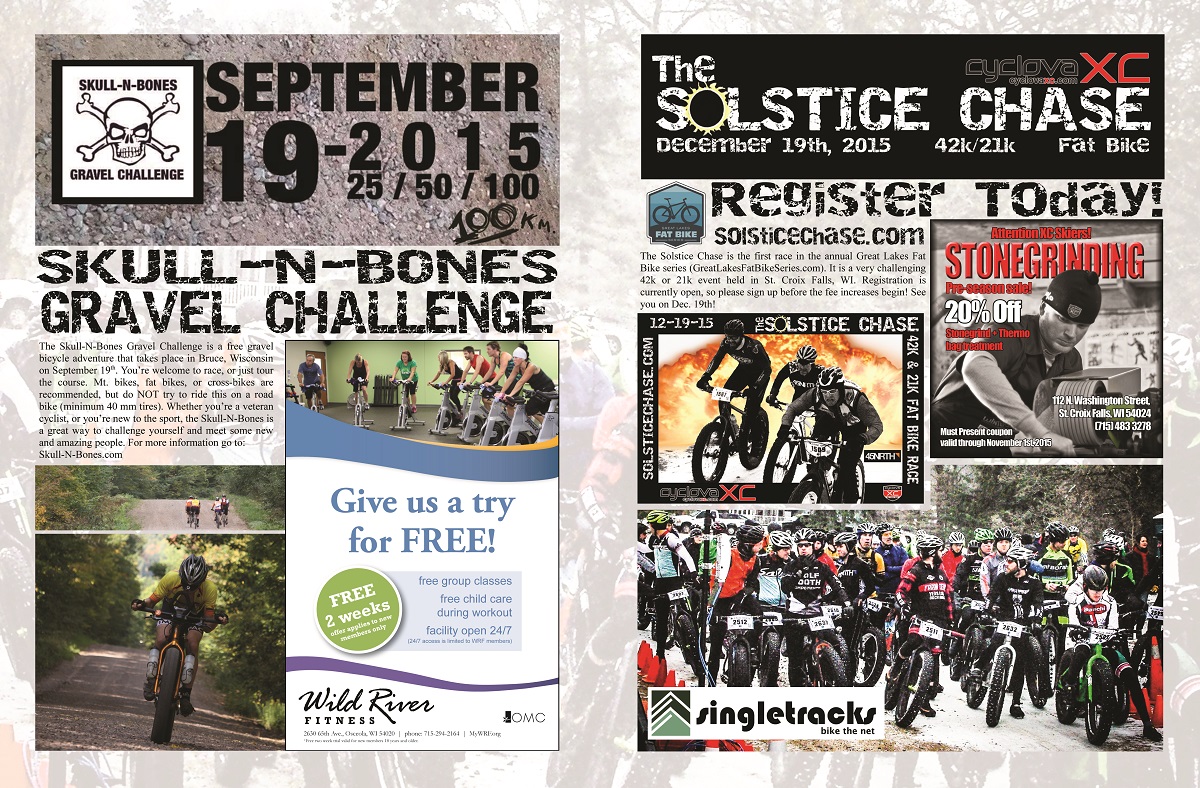 “The cops have been pretty cool,” Chris said, a little life returning to his voice. “They take it seriously around here. I was out playing Dog the Bounty Hunter, and I kept seeing the patrolman I talked to out there looking as well. He even gave me his private number in case I found anything.”

At least that was nice. You already feel powerless when somebody steals from you. That feeling is compounded exponentially when the authorities hear the word “bicycle” and act dismissive. If you said that somebody stole $3,999, they’d probably take it seriously, but the word “bicycle” makes eyes gloss over.

“I told the police,” Chris continued, “that I understood they’d probably never find it. The cop replied, ‘You’d be surprised.'” I heard the life return to his voice when he said that.

We set about a plan. The best way to deal with a sense of powerlessness is through positive action. Chris went around to every pawn shop in the city and let them know the situation. I got the bike’s serial number. Then we did the social media campaign. The members of CORBA got all fired up about being on the lookout.

“Call the cops people!” we said. Hey, we all want the bike back, but physical confrontations are not worth the risk. We can live with a stolen bike. Don’t allow a bad situation to become worse.

The bicycle hasn’t turned up yet, but who knows? It may yet appear on Craigslist or in a pawn shop. The worst thought is that the guy just took the bike on a twenty minute joy ride only to throw it in the river (although fat bikes do float). What a waste that would be.

In private I talked with other friends about taking up a collection for Chris, but he shot the idea down. “I’m not asking for anything,” he said. I see his point. Setting up a GoFundMe account or something is unappealing.

When we had the bicycle stolen from our shop, the thing that helped was just to see the community come out and offer their support. One bad individual can hit you with a sucker punch, but it’s amazing the restorative power of hearing people say, “we like you, and we like what you’re doing.” It’s important to remember there are hundreds of positive people for every negative one, and it’s great to take the opportunity to stop and recognize that.

Chris doesn’t want any hand outs. But give his Facebook Group a like, check out his event and web page. Share this article, send Chris a message, and if you’re ever in Bruce, Wisconsin, ask him to show you around on a bicycle tour. The bicycling community is a family. We need to stick together.

Also… keep your eyes open for a Salsa Bucksaw. Who knows? This story might yet have a happy ending.

Culture
One Less Mountain Bike: A Tale of Too Many Stolen...
Culture
BOLO: An Upgraded Niner RIP 9 and a Camper Full...
Progression
Don't Be A Tool At The Trailhead: Avoid These 5...
Gear
Ottolock: Secure Your Bike at a Campsite, Cafe, or on...

I had this very thing happen to me a couple years ago with my dos niner. Believe it or not I had a happy ending and I’m still riding it to this day. I was living in the marcy holmes neighborhood of Minneapolis which I still think is a good quiet neighborhood. Had my bike locked to my fork mount roof rack with the front wheel locked inside the car ready to hit the trails after work. To this day I’m not sure how they managed to get it off. But they were kind enough to leave me a pos ‘Walmart bike’… With no front wheel of course. I tried the cops. They took all my info and said we’ll let you know if it turns up. I wasn’t confident that it was anything more than a hail mary. I decided to take matters into my own hands as well and posted a Craigslist ad for my stolen bike. Pretty much described every inch of the bikeoffered a reward and blew off some steam with a few smart remarks about what I’d do if I saw you riding my bike. Two heartbreaking nights goes by and I get a text from a guy about 6am who thinks he has my bike. I literally almost called in sick to play dog the bounty hunter for the day since I didn’t know what exactly I might be getting into. I resist and set up a time to meet the guy after work at a restaurant (in public). Longest day at work evergoes by. So I get to the place, round the corner of the parking lot and sure enough there was my bike attached to someone elses car. So much relief and stupor hit me. The guy had bought it from a sketchy dude in a menards parking lot in Columbia Heights for just 150 bucks. I gladly offered to reimburse him for what he invested and then some. He refused to take anything from me and said he should have known better and was just glad to get my bike back to me (less the bottle cages and a small seat bag…but who cares). Turns out he stumbled upon my ad while looking for a front wheel that would actually fit the bike. Moral of the story is I’ll stick to keeping the front wheel inside the car for the rest of my life. Needless to say I also had some faith restored in humanity that day.

So… Try to keep positive! Whether it turns up or not, life will pay you back if you’re a decent human being. You never know what crazy thing might come of it. Hope it turns up for you though!

That is a truly great story! If that guy refused to take $150, he sounds like a saint–certainly a pay it forward moment. Thanks so much for sharing!