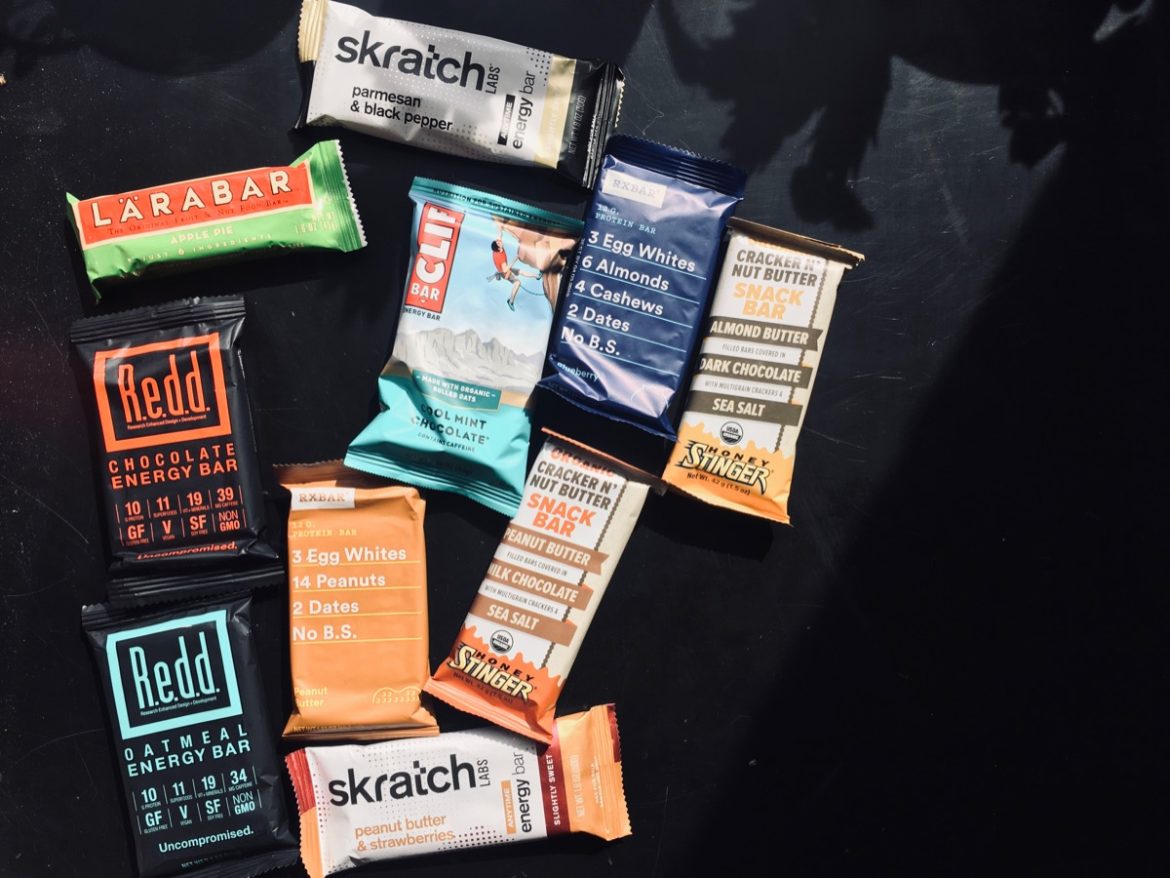 There are two types of people in the world: those who simply look at food as fuel, and those who don’t. Whatever you call them — energy bars, trail snacks, or simply bars — these products are designed to fuel mountain bikers before, during, or after the ride.

Still, no one wants to eat something that tastes bad.

I decided to ask eight hungry mountain bikers which bars they thought were tastiest. After a 2 hour mountain bike ride, each participant was asked to blindly taste 10 different bars and rate the flavor and texture of each. Here’s how the results stacked up. 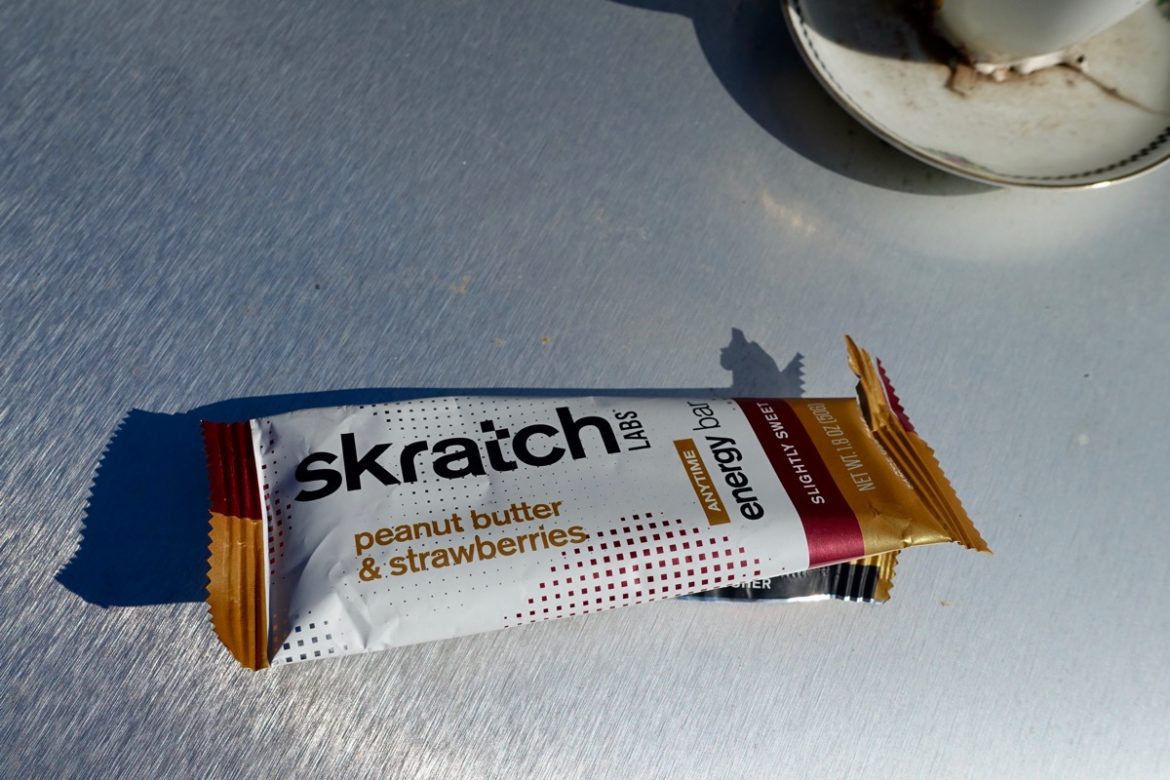 It’s settled: you can’t go wrong with good old fashioned peanut butter and jelly, at least when it comes to this crowd of mountain bikers. Scratch Labs describes this energy bar as “slightly sweet.” The bar is said to be gluten- and dairy-free, and it’s also vegan. The ingredient list is fairly lengthy but everything is totally recognizable from the first ingredient (nut butter) to the last (tapioca.)

Leon nailed this one, saying it “tastes like peanut butter & jelly!” Craig D was thrown off a bit saying he didn’t know what to think but gave it “points for unique flavor.” According to Chase, the Scratch Labs PB & Strawberries bar has “just enough peanut butter.” 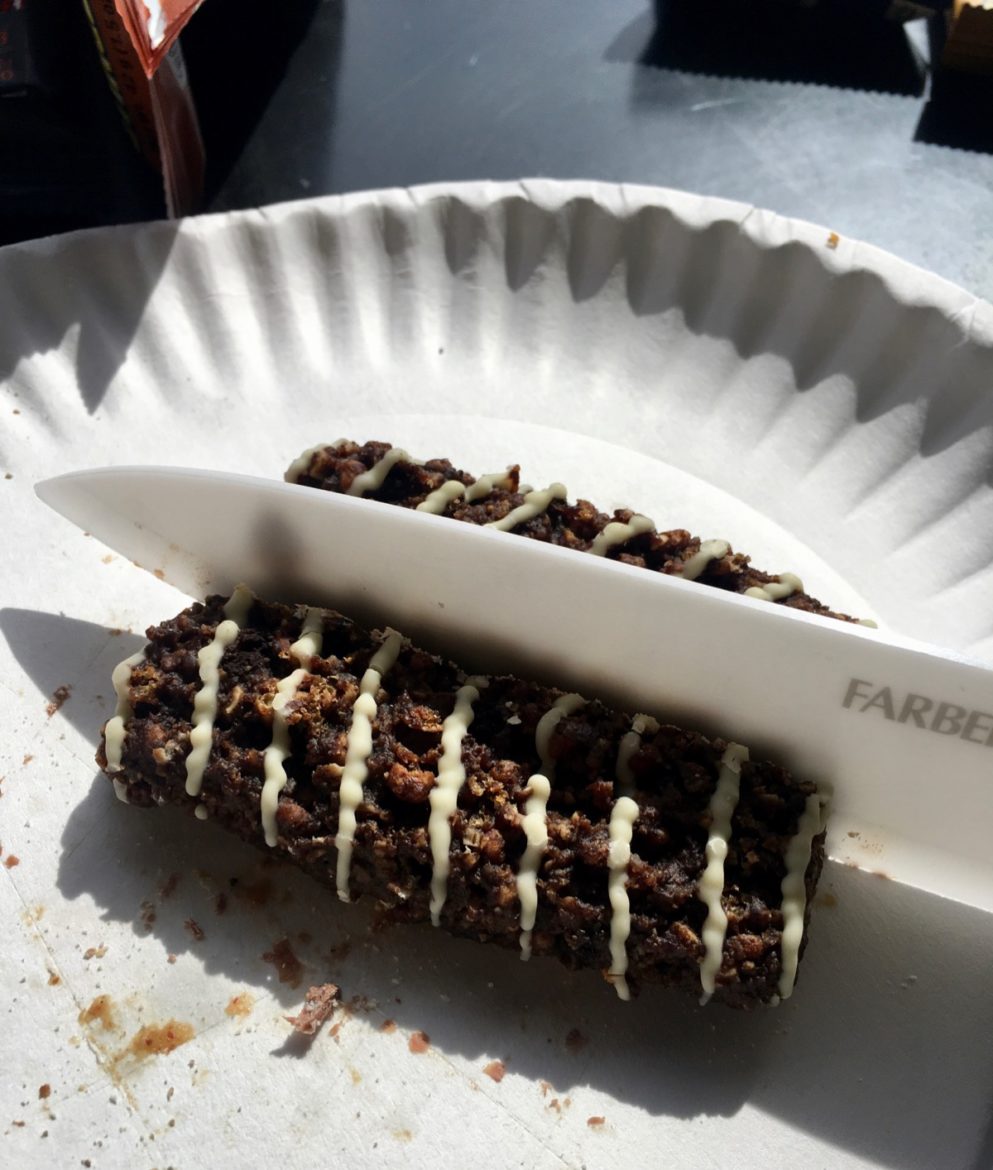 This flavor has been around for a long time, and it’s a staple for a lot of riders like myself. The version we tested contains caffeine for that added bit of a pick-me-up during the ride. Clif bars are among the largest (by weight) in our test, and correspondingly tend to pack the most calories (fuel) in a single bar. 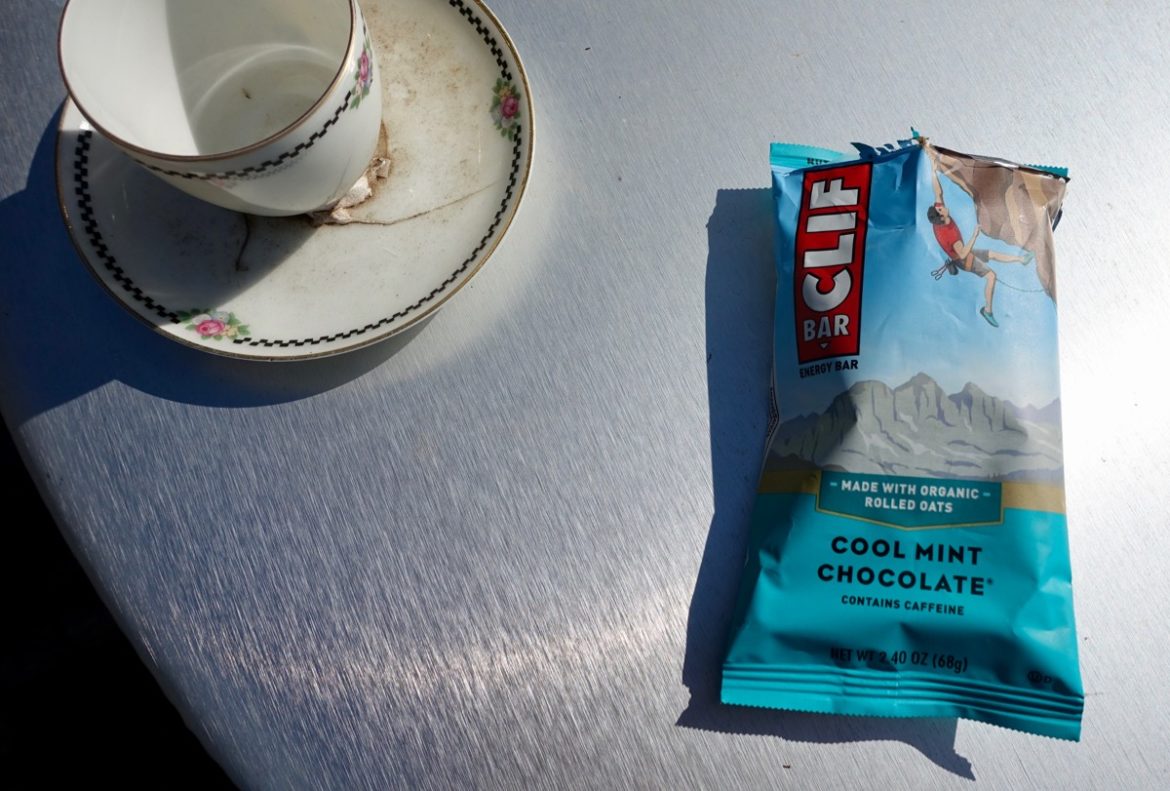 Everyone picked up on the mint flavor, which is often a welcome cool taste during or after a hot ride. The only complaints from our panel were that the bar tasted a little grainy (Chris) and that it was dry (Paul). 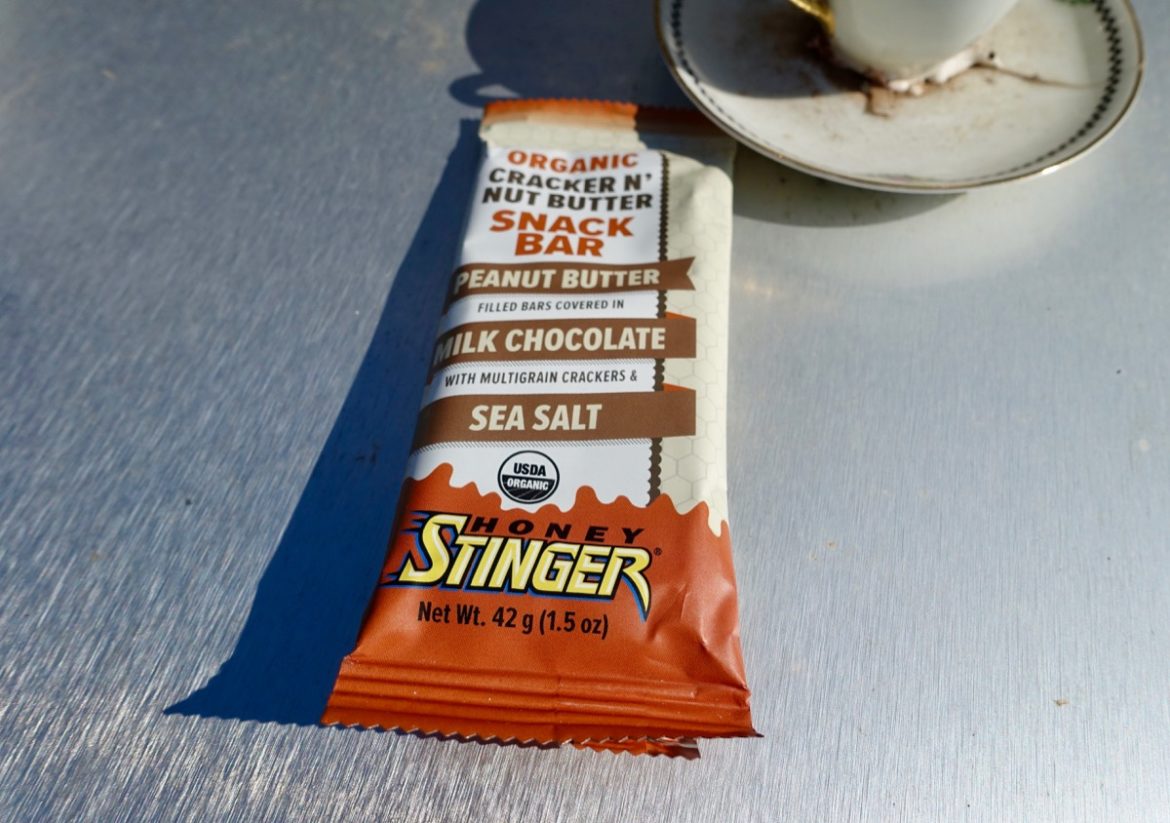 Technically, the package says this is a Honey Stinger Organic Cracker N’ Nut Butter Snack Bar with Peanut Butter filled bars covered in Milk Chocolate with multigrain crackers & Sea Salt. This is part of a new snack bar line from Honey Stinger, which Matt first reported on from Interbike. Essentially it’s two crackers with peanut butter spread in between them, and the whole thing is covered in chocolate. 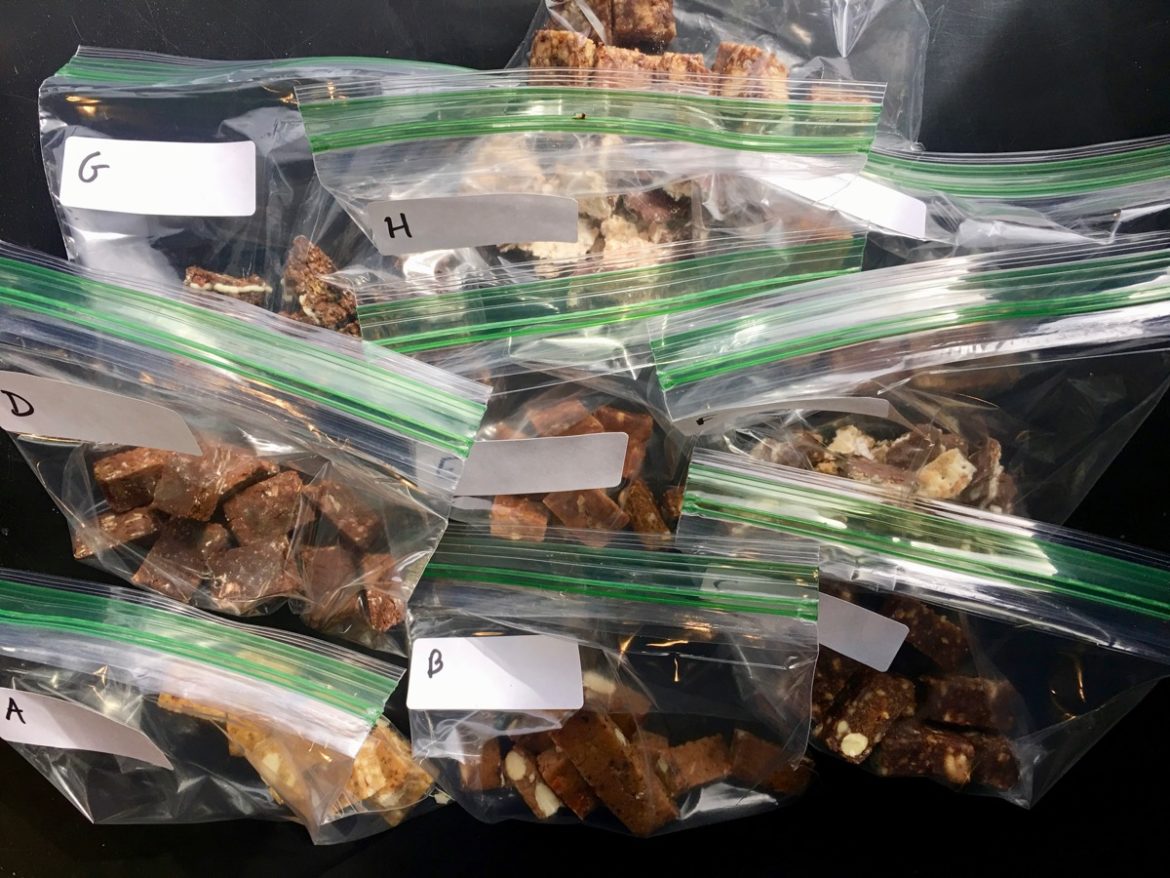 If you skip ahead, you’ll notice another Cracker N’ Nut Butter bar follows this one at #4. More than one of our testers asked if these two bars were in fact the same since they couldn’t taste a difference. The rankings, however, show there was a significant difference in how our panel rated the peanut butter vs. almond butter flavors.

Paul noted this bar is “crisp, salty, good.” To Chris B, it tastes “like a pretzel with chocolate.” Craig D compares it to a salty Kit Kat bar. 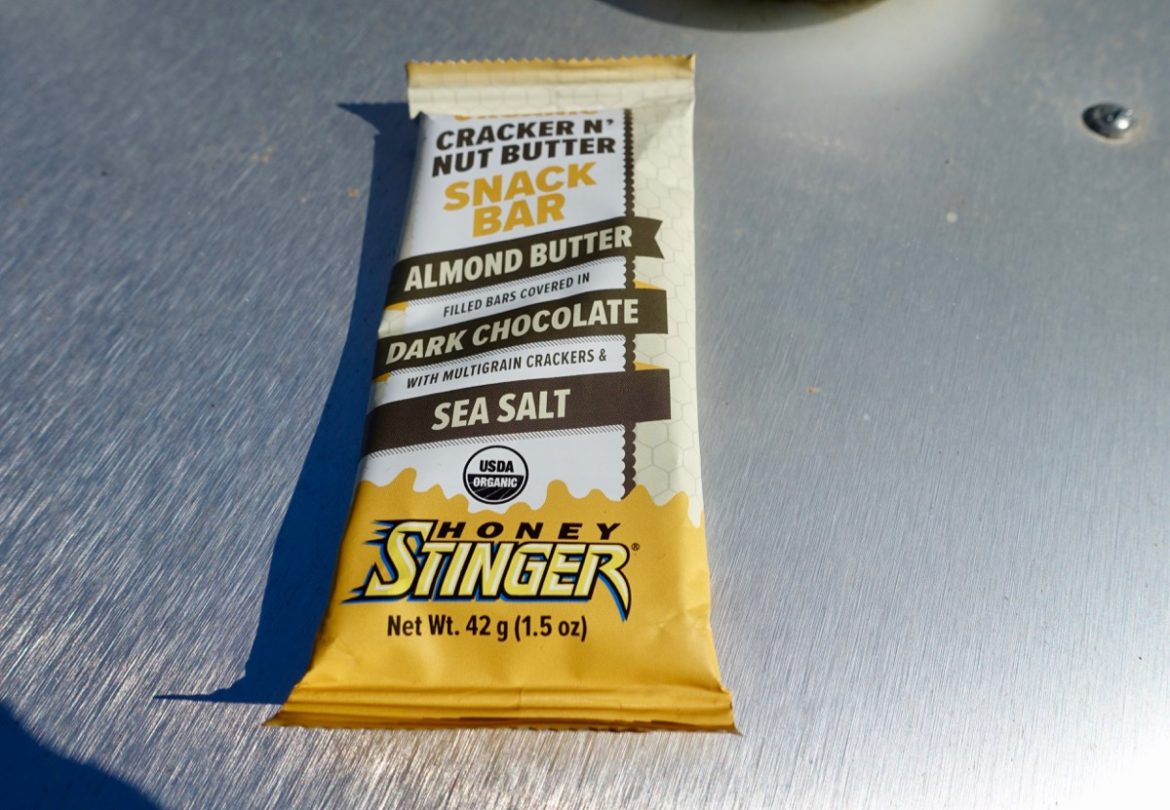 After averaging our panel’s ranking of each bar, a full point separated the two flavors of Honey Stinger Cracker N’ Nut Butter bars, which is more than the separation between #1-3, and equal to the difference between the three lowest-ranked bars. Clearly our tasters had a preference for the peanut butter over the almond version.

Kaleb summed up the situation, saying the almond butter snack bar tasted like a “worse version of [the Honey Stinger peanut butter bar.]” The Craigs were divided, with Craig D saying this one “tastes like candy” while Craig H noted the bar “finishes weird.” 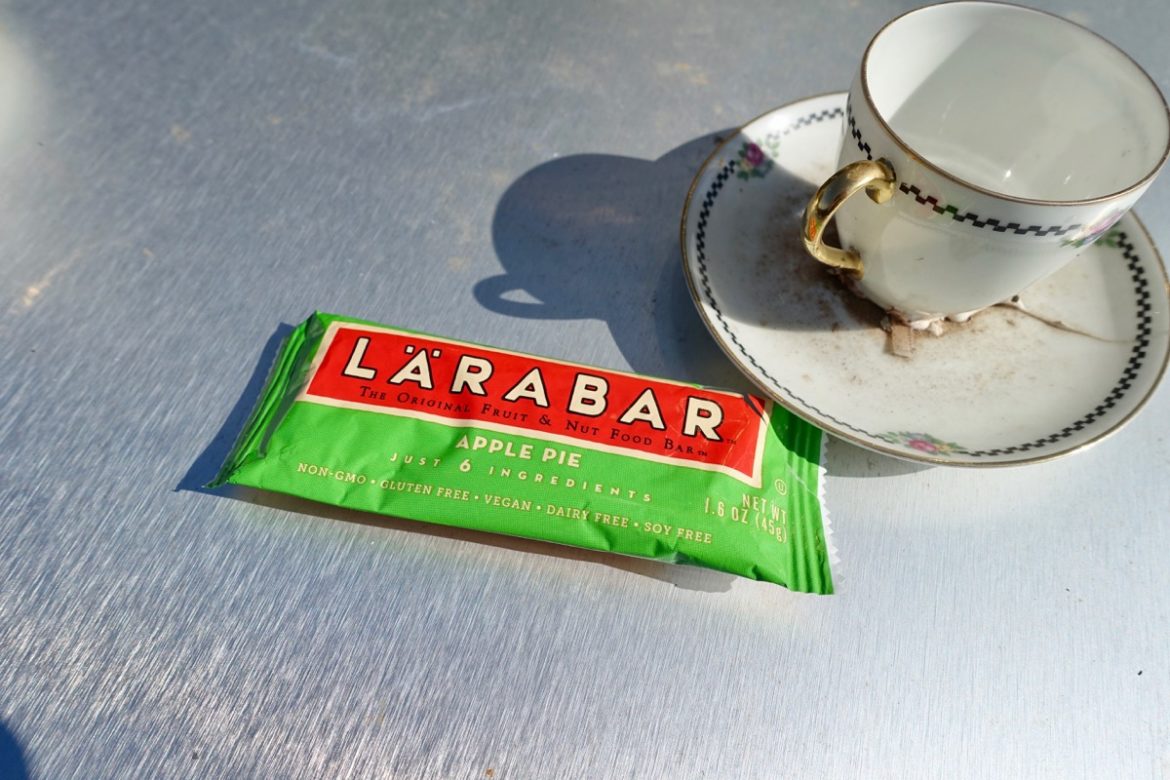 Larabar prides themselves on keeping the ingredient list short and sweet, and they claim their bars are soy-, gluten-, and dairy-free, in addition to being vegan. The Apple Pie bar is made from dates, almonds, apples, walnuts, raisins, and cinnamon. It’s a soft bar with crunchy nuts, and generally one of my personal favorites.

As one of the bars that ended up in the middle of the pack, views on this one tended to be pretty polarizing. Craig H says the bar “tastes home made,” yet he ranked it dead last (not sure what that says about his view of home cooking.) Kaleb called this one “fruit cake” which isn’t saying much given the reputation for fruit cake among Americans. 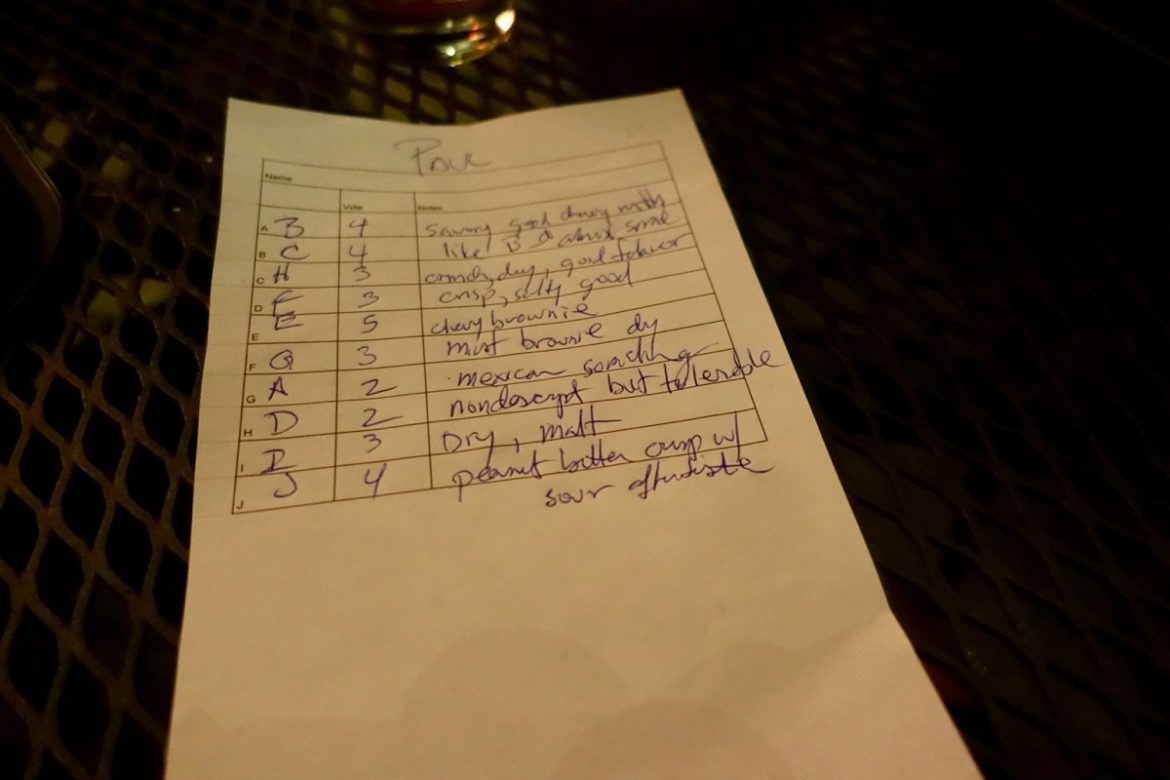 Craig D called Lara’s apple pie “fruity and pleasant,” while a couple others ranked this one at or near the top of their lists. 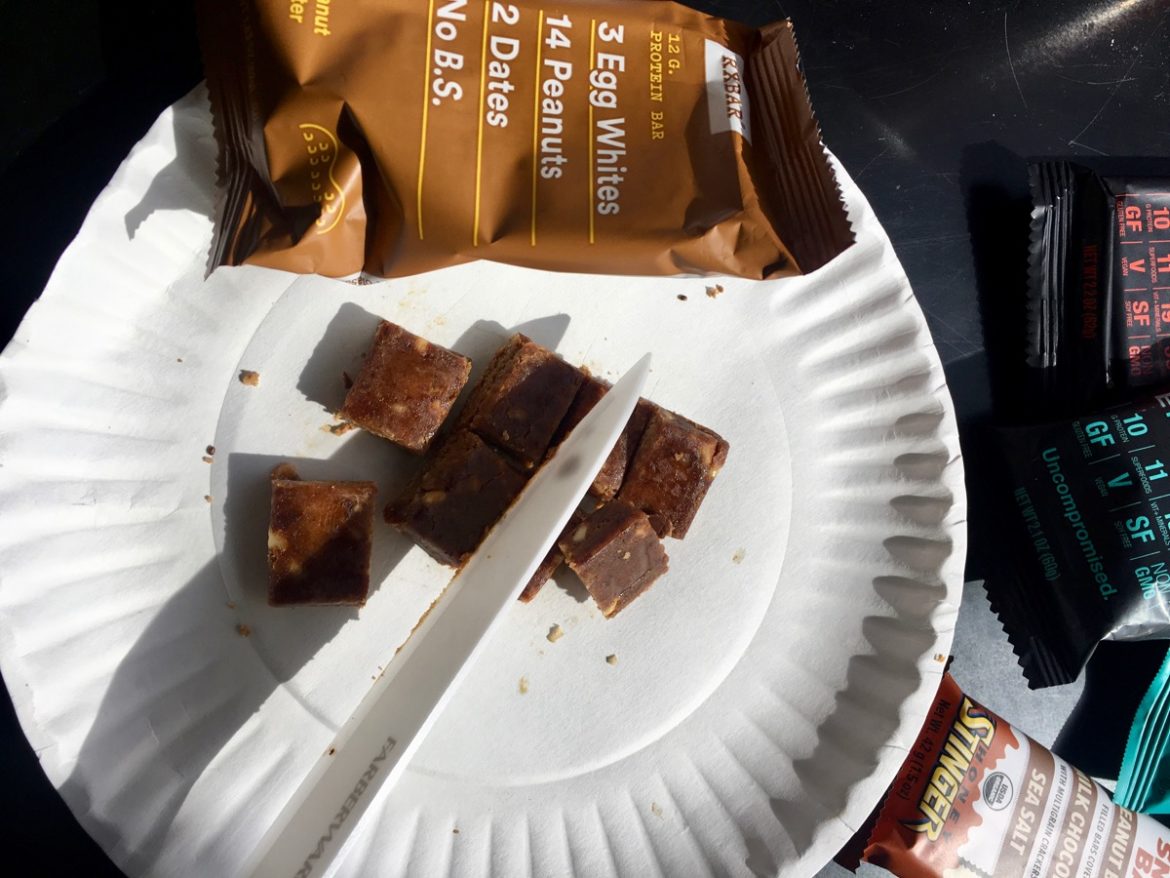 RXBar takes the cake when it comes to a simple ingredient list. In fact, the company lists the ingredients and quantities right on the front of the package. The Peanut Butter bar we tasted has 3 egg whites, 14 peanuts, 2 dates, and “no B.S.” (The official ingredient list adds in natural flavors and sea salt, which may or may not be B.S., depending on your perspective.) 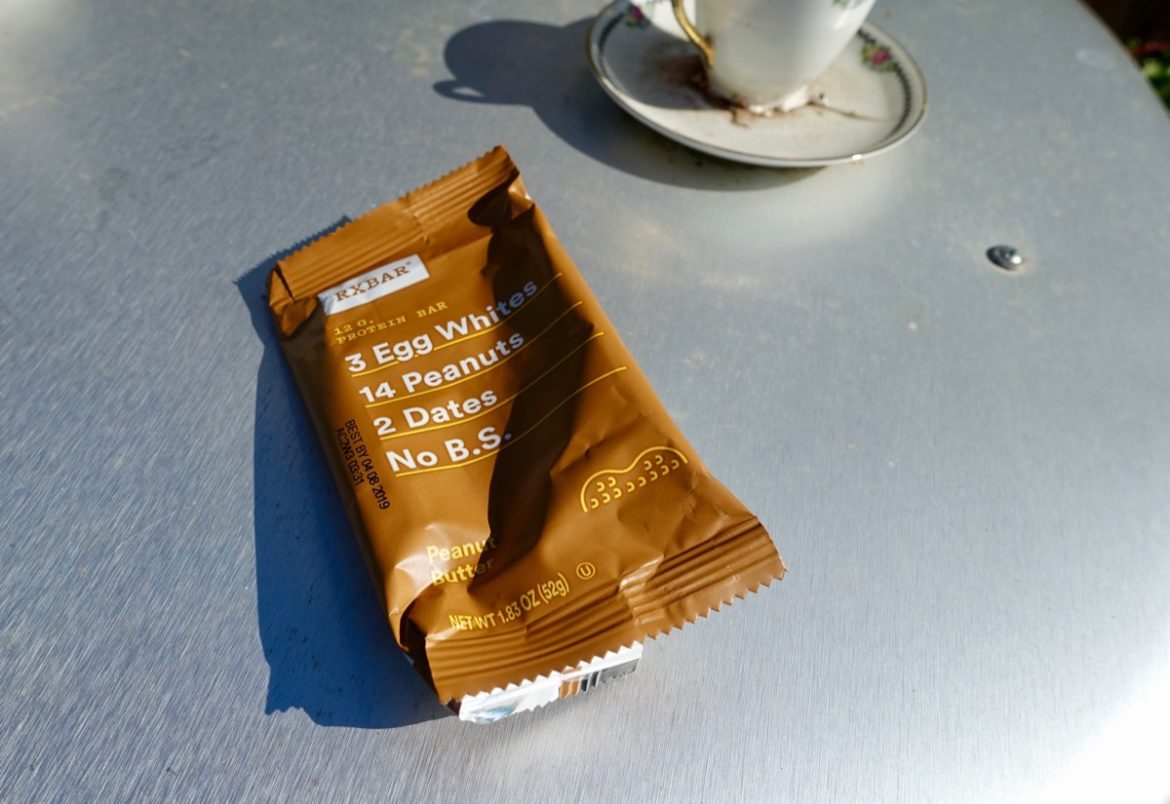 Paul really liked this one, saying it tastes like a “chewy brownie,” despite the fact that it contains zero chocolate or chocolate-like ingredients. Most of the other reviewers noted the RXBar was a bit on the chewy side. Craig D notes the bar has a “normal energy bar flavor” while Kaleb was not impressed, saying the bar is both “bland [and has] bad texture.” 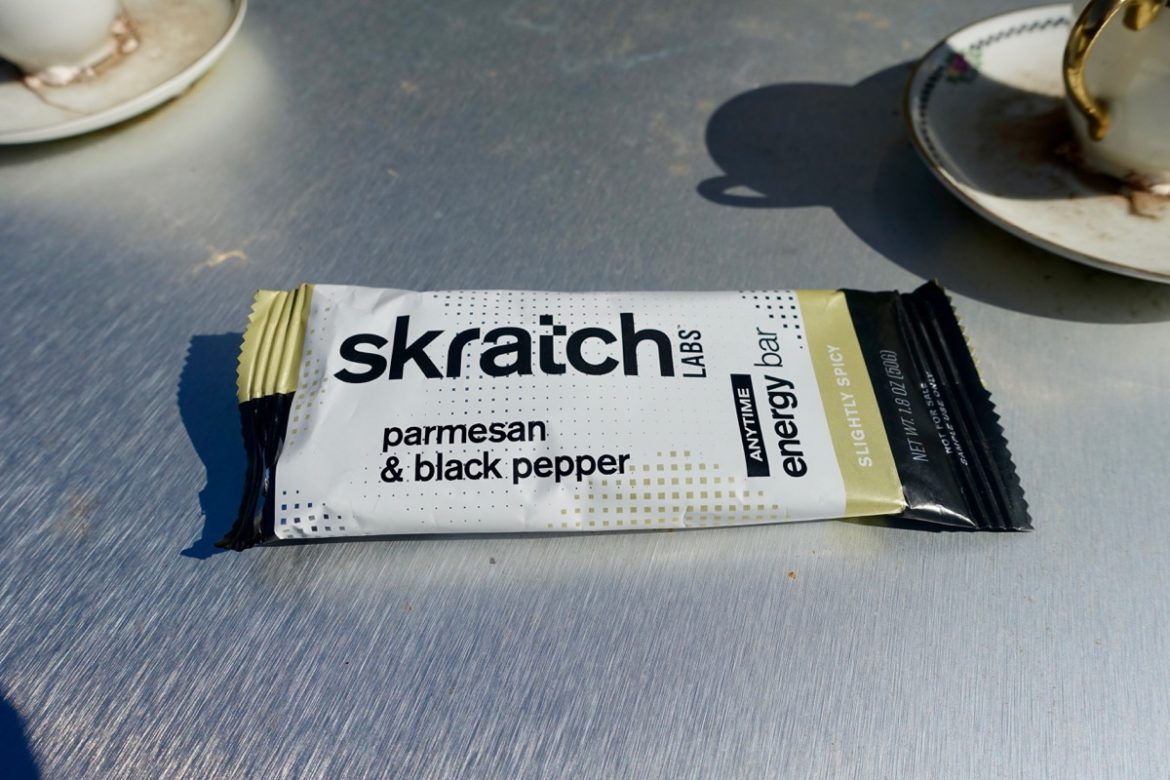 This is another bar we sampled at Interbike, and clearly the flavor is a little out there. Personally, I dig it.

I warned the group that one of the samples was savory just to make sure no one was thrown off too much, and I’m pleasantly surprised this didn’t end up at the bottom of the list. One of our vegetarian testers asked me to confirm the bar didn’t contain any meat, which is a valid question because the thing smells like a pepperoni pizza or a stick of beef jerky.

Kaleb and one other ranked this one among their favorites. Leon says “garlic doesn’t belong in an energy bar,” while Craig D compared the flavor to Pepperoni Pizza flavor Combos, which happens to be one of my favorite snacks. Chris wasn’t sure what to make of this, asking, “What is happening?” Paul suspects it’s “Mexican something.” 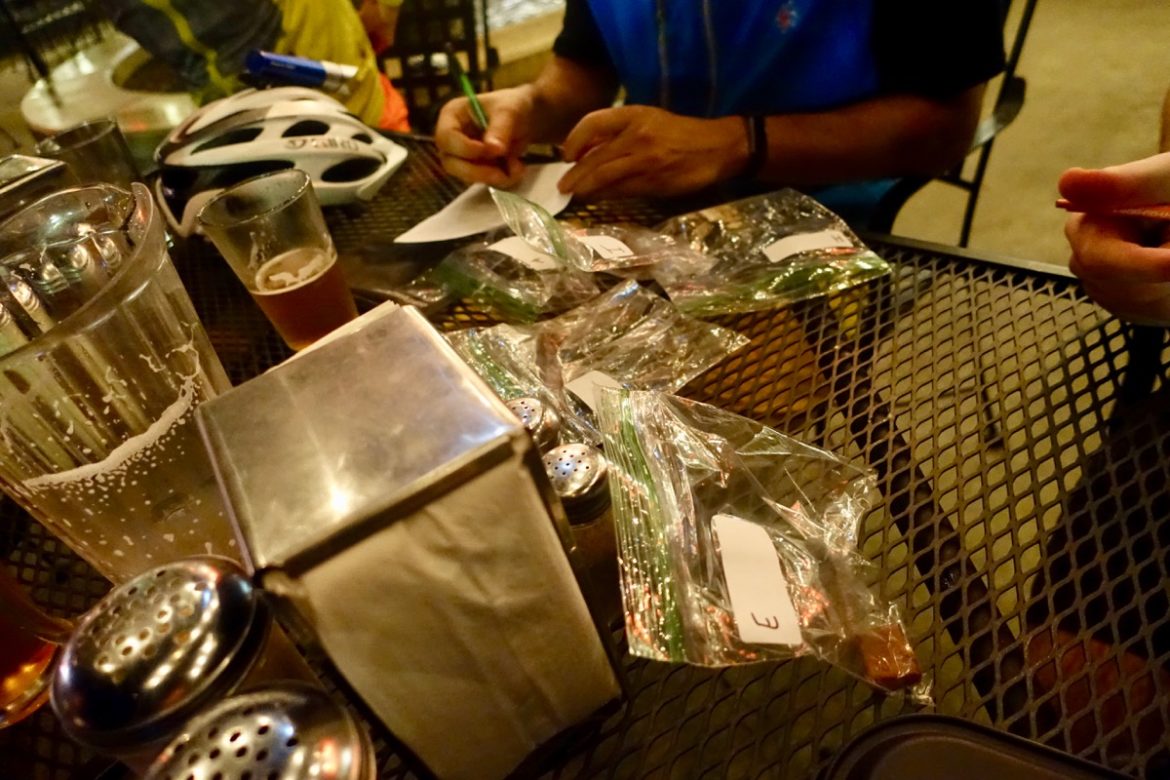 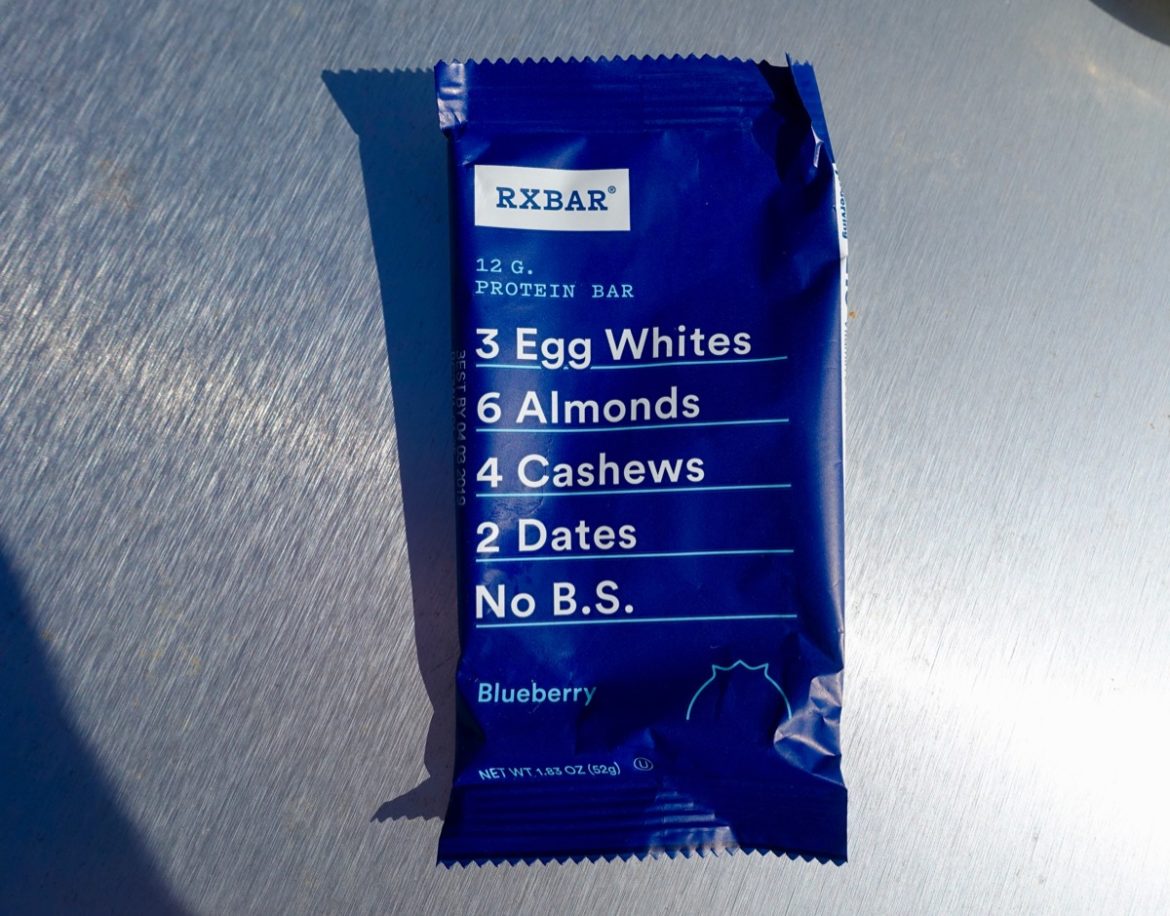 Curiously, the ingredient list on the front of the Blueberry RXBar doesn’t list blueberries. Perhaps that should have been a sign that our tasters would not rank this one highly. (To be fair, blueberries are listed as the fifth ingredient on the back of the package.)

Craig D liked the Blueberry RXBar, saying it has “kind of a bubblegum flavor.” Like the other RX Bar in the test, more than one person found the texture to be “chewy.” Kaleb was perhaps the most critical, saying the bar “tastes like foam [and is] too sticky.” 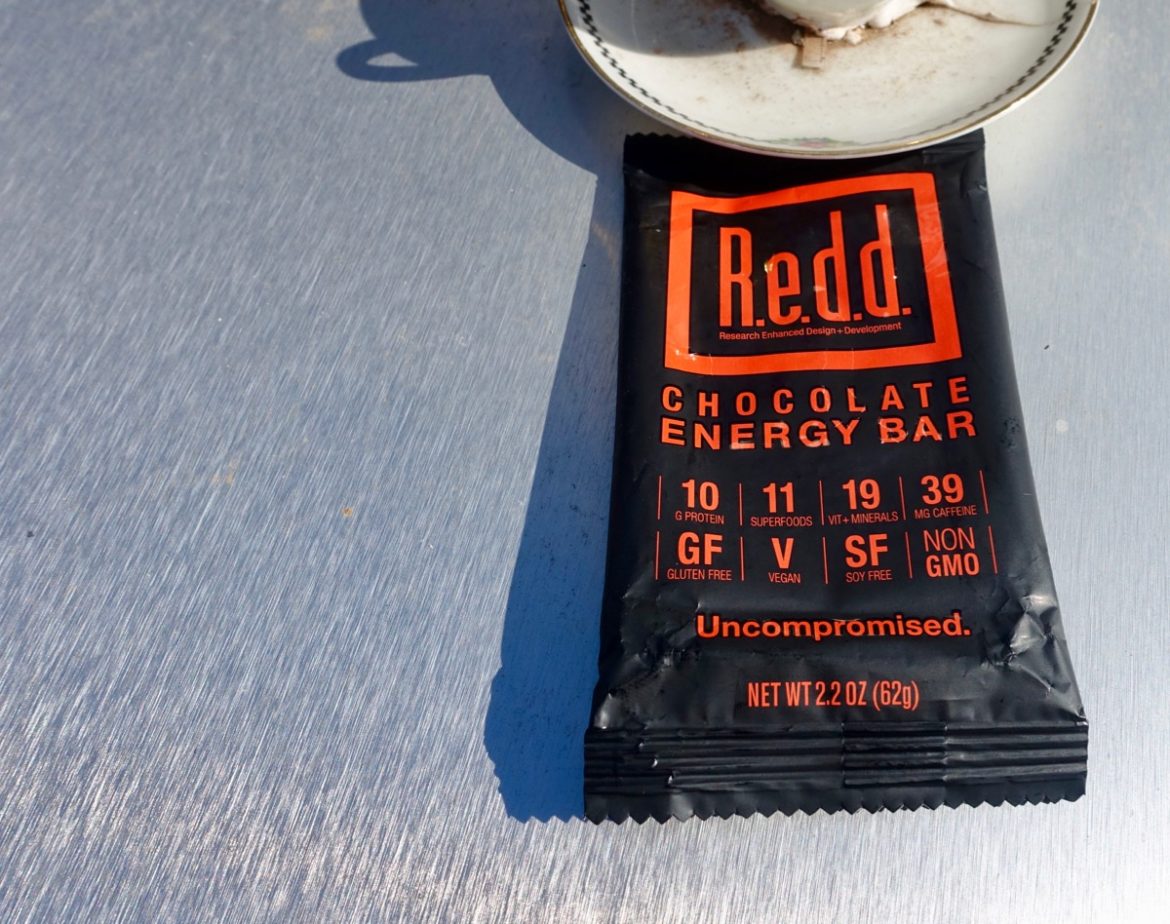 Poor R.e.d.d. The name stands for “research enhanced design + development,” and judging by the packaging, each bar packs a lot of good stuff like protein and “superfoods” plus more than 30 vitamins and minerals. Unfortunately, as we found in our sports drink taste test, the most beneficial products tend to taste the worst. Big shocker: people don’t often like to eat what’s good for them.

Chris B really enjoyed this one, rating it at the top of his list saying it’s “chocolatey but not too sweet [with a] good texture.” Kaleb, on the other hand, says the bar starts off strong with a “good, dense texture” but finishes with a “weird tangy aftertaste.” Paul says it’s “nondescript, but tolerable.” Craig D notes this one has a “very energy bar flavor.” 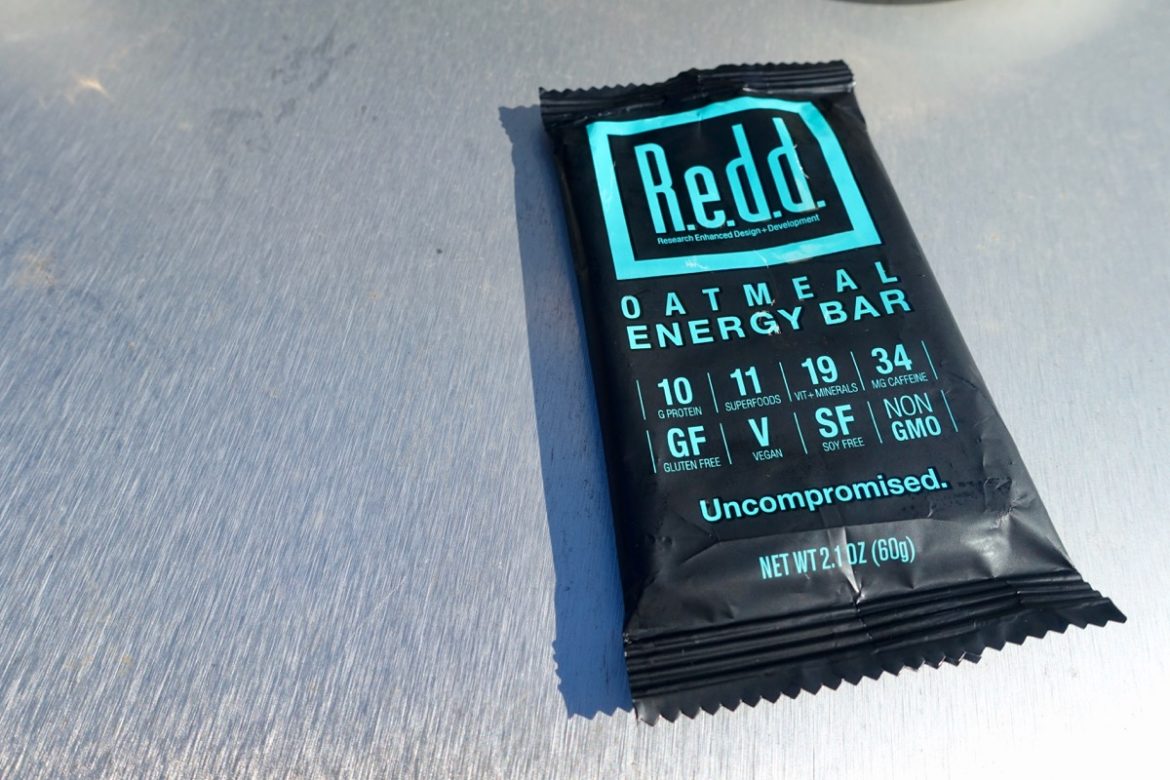 Like the Chocolate R.e.d.d. energy bar, the oatmeal version packs about the same amount of caffeine as a third of an 8 ounce cup of coffee, and is gluten- and soy-free. The label says it’s vegan, but not dairy-free, perhaps due to the fact that it’s “manufactured on equipment that also processes” milk, among other things like eggs. So for very strict vegans, this might not cut the mustard.

No one rated this flavor above the middle of the pack, simply calling it “average” or noting it’s “not my flavor.” Chris B said the texture is “a bit dusty” while Kaleb called it “crumbly, in a bad way.”

We had a lot of fun taste testing these energy bars, though clearly taste isn’t everything and these “results” are completely subjective. Just as important, if not more so, are the performance and nutritional benefits, plus other considerations like food allergies and dietary restrictions.

The good thing is energy bars aren’t expensive, so buy them all and see for yourself which ones taste best to you!

While we were able to test 10 different bars, there are many more flavors and brands out there, so let us know which are your favorites. And also which ones you can’t stomach.

I think you may have picked the wrong flavors of my two favorite bars; Larabar and RX. I love the cherry pie Larabar but have no use for the apple pie; the cherry pie is a bit tart though so that throws some people off. I also dig RX Bars but the to flavors you used are the only two that I will never buy because they are so much worse than the other offerings. Just my two cents from real world testing and personal taste

Also, no Kind bars? The one they have that is cherry chocolate is pretty great, as are most of the flavors I have tried, except the one with blueberry… blueberry bars in general seem to taste artificially flavored . No Kind bars is a major omission from this test in my opinion

The cherry pie Larabars are delish 🙂

I like bars that are not heaving in my stomach. Cliff bars are like cement in my gut. Larabars are light enough along with Skratch. But my mainstay is a real banana. Seems to work the best for me

The Clif bars don’t bother my stomach as long as I do not eat too much at one time. And the Clif Chocolate Mint Protein Bar is far better tasting than the Clif Cool Mint Chocolate Bar (regular bar). The protein bar has twice as much protein (20 grams) and really keeps you going on demanding rides. I carry bars on most of my rides, but all in all, I’m still a peanut butter and jelly sandwich man myself … with an apple. I can go all day on two sandwiches and a couple of apples.