Did you ever want to ride like a pro, using their own gear? In hockey, it happens all the time: you can purchase a player’s own branded stick with his own personal preferences.

SRAM’s custom approach to bike components started 20 years ago with the Blackbox Program and the BoXXer forks, as they tuned and built custom components for their top riders. From that point on, the custom tuning expanded to brakes and other components. Now you can purchase from Truvativ the same Blackbox parts that they produced for select signature riders. The bar series features Danny Hart, Stevie Smith, and Jerome Clementz–all top riders, and all with different needs.

The folks at Truvativ sent all three of these bars down for review. Of the three, I used a Norco Aurum Dorado for the DH bars and my Santa Cruz Nomad for the carbon Jerome Clementz bar.

Here’s a little information about each of these riders, to help you get a feel for why each individual bar was designed the way it was:

Danny Hart rides fast and loose. According to Truvativ, “in the past, Danny used a 5mm space under his direct mount stem combined with a 20mm rise BooBar to lift him to the exact height he wanted, but that setup wasn’t seamless.” The new bar “delivers the 25mm rise that he needs-with no spacers and less weight. We also added two more degrees of back sweep for a total 9 degrees, which moves his weight back, putting more pressure on the rear wheel,” said Truvativ.

Stevie Smith rides gnarly terrain extremely fast. According to Truvativ, “we teamed up with Stevie to create a bar that is high and out in front, giving him ultimate control. His signature 780mm DH bar features a 30mm rise, keeping his hands forward, his head up, and his eyes focused.”

Jerome Clementz is an “all-mountain legend” who makes his living by shredding as fast as possible. According to Truvativ, “Jerome asked us for wider, stiffer, lighter bar that gives him ultimate control without sacrificing the toughness he needs for powerful sprints and descents.” The 750mm Blackbox bar is the result, featuring “5 degrees of up sweep and 7 degrees of back sweep, this signature bar keeps your bike light and strong so that you can rail every turn with precision.” 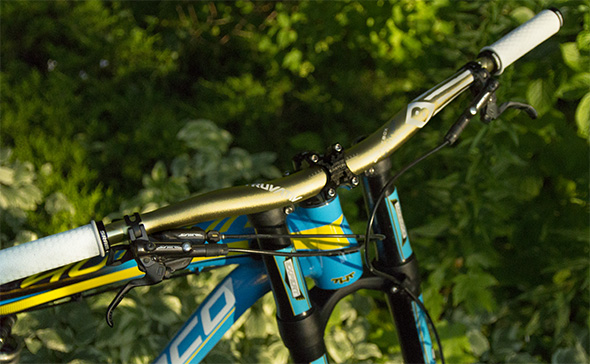 It took some time to thoroughly test these bars. I swapped things out, reflected on how they felt to me, swapped them out again, and did even more comparison. I also sought second opinions from a few other friends that I trust, and we discussed our thoughts about what type of ride each bar suits best.

Then, we installed the bars on a second bike, and went through the same process all over again. Yeah, it was time consuming to say the least, but in the end I think I was able to truly get the feel for how each individual bar performed.

Of the two DH bars, I personally found that although they are aluminum, they felt great, and were almost as good at absorbing the sting off of bumps as the carbon bar. 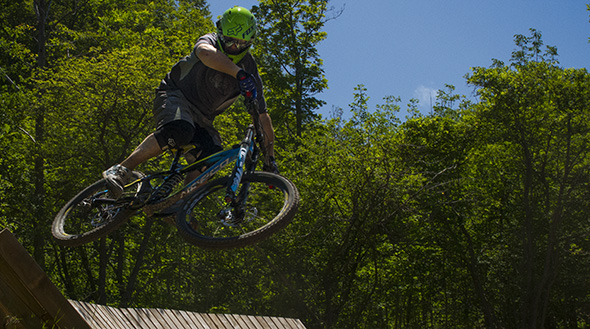 Both DH bars were the same in that respect. However, I personally loved the Danny Hart bar. I found that the 9° back sweep combined with the 25mm rise felt great on the Aurum.

Comparatively, I found that the Smith was too up and forward. However, my buddy Darren, who is great at bike control, loved the Stevie Smith DH bar compared to the Hart. He preferred the heads-up centered feeling that the Stevie gave him.

Switching gears to carbon, the Jerome carbon bar felt quite different from the other two. Carbon has a distinct advantage since it’s a totally-engineered item. The lay up of the layers and choices of carbon all go into the different feel of the bar. I personally liked the feel and control it provided, and found it did very well on my trail bike.

Using the bar on some seriously tight, rocky terrain at 3-stages, I was happy to find that the Jerome bar did very well at dampening the impacts. Control was no issue, as I could easily muscle my way around things. But if you’re in a situation where you find yourself riding old school singletrack, you just may find that you’re clipping one too many trees. The 750mm width, although I love it and feel perfectly comfortable riding with it, does tend to hit a trunk or two when things get really tight. The 3-stages trail was cut when bars were only 635mm wide.

Thanks to the folks at SRAM for providing the bars for review. Stay tuned for more reviews from SRAM!

Those carbon bars look awesome. I haven’t rode carbon bars yet but everything I am reading make me feel like I should make it a priority.