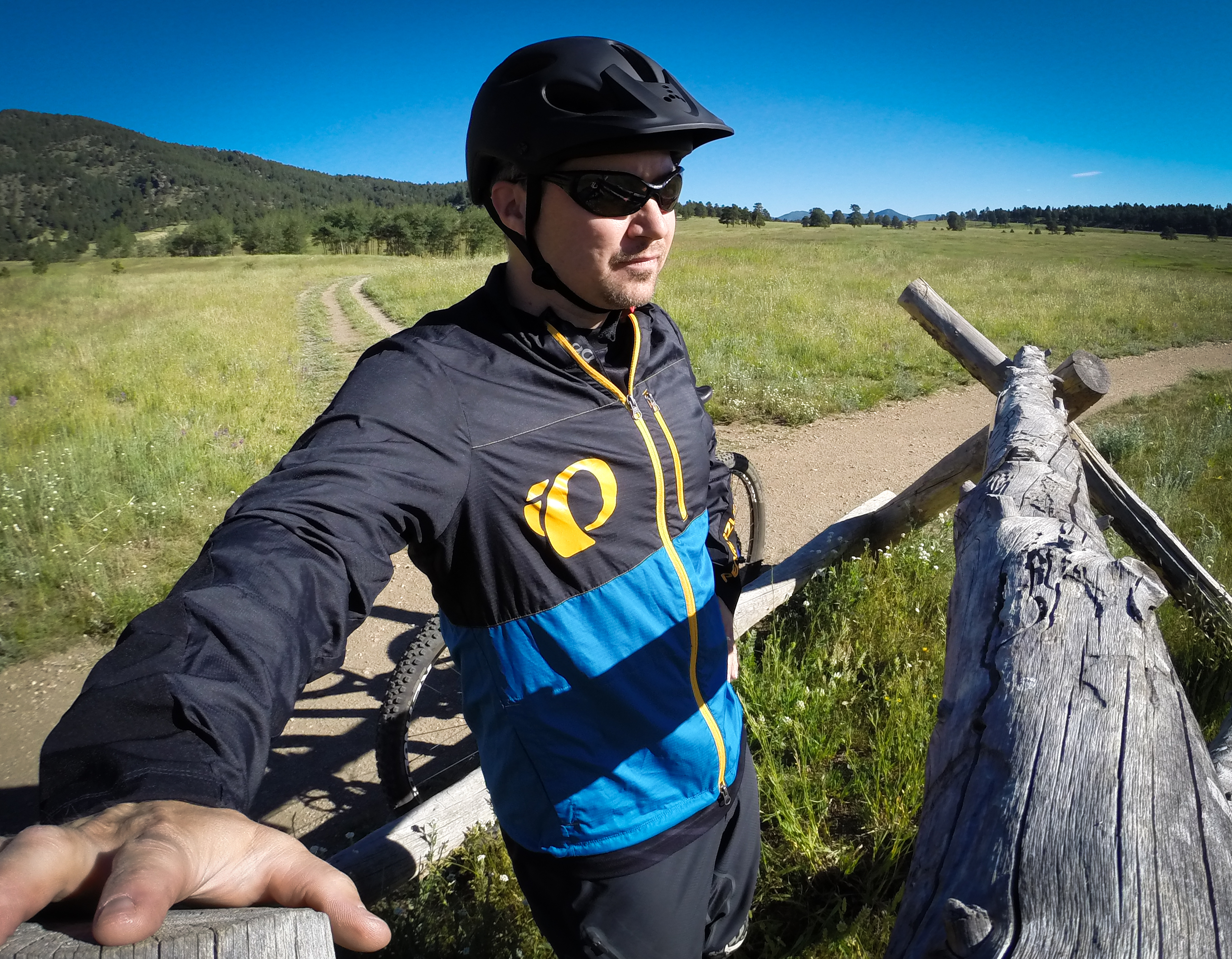 Depending on where you live, a lightweight, packable cycling jacket may be a mountain biking necessity year-round. Weather can be unpredictable, whether it’s high winds in California, torrential afternoon Florida downpours, chilly Indian summers in the Rockies, or damp north shore evening rides–there is a call for a jacket even in summer.

Pearl Izumi has been long revered not only for their quality products and unparalleled warranty, but for innovating and anticipating cyclists needs. In short, they have been around the block and know a thing or two about what mountain bikers need for the long and short haul.

The MTB Barrier Jacket is designed as a lightweight outer layer to stuff in a hydration pack and whip out when things get uncomfortable,whether it’s wind or moisture, or to protect your sweaty lycra-covered body from the elements. Made of 100% polyester for extra warmth and moisture control, it is specifically-designed for mountain bikers with a loose fit to preserve range of motion and hold a small amount of gear. The fabric beads water and resists whipping winds.

Like most jackets, the MTB Barrier has a full length zipper, but extra thought was put into the draft flap to seal in as much warmth as possible. I am not sure if it was just the jacket I was testing, but I found it difficult to get the zipper started once the tongue was inserted into the zip. This occurred almost every time that I used it, and it was a little frustrating when I was already cold or it was windy and I needed to get the jacket on ASAP. Careful inspection did not reveal any flaws in the zipper teeth, and once the zipper was started it performed as any zipper should: flawlessly, not catching on the draft seals. It was also easy to unzip and remove the jacket when I was done, so I am not sure why it was so difficult to start.

The jacket is also adjustable with drawcords at the waist to cinch the jacket tight. Though this may help in unfavorable weather, I never found a reason to use them, but they also never got in my way. One may argue that it is unnecessary weight, but I can think of a few situations where the drawcord would be handy–very high winds for example–and a few extra grams is worth the marginal weight penalty.

Though the MTB Barrier isn’t designed to be a featherweight outer, it is still very light and strikes a good balance between the gram counters and functionality. Two generous hand pockets and a chest pocket are perfect for essential gear you may not want to access your pack for if the weather is foul, such as a map, phone, or even gel shots. Though the fabric is thin, abrasion-resistant panels placed on the outside of the arms provide extra protection for both the fabric and the user against wear, crashes, and a bit of insulation.

I mainly tested this jacket in the spring, where the old Colorado adage often proves true: “if you don’t like the weather, wait five minutes.” Several times I reached for this jacket when the winds kicked up and the temperature dropped, and I was really glad I had it, even after the temptation to regret bringing it along on several other rides where it wasn’t used at all. It worked very well in winds up to about 20mph and when the temperature quickly dropped 10-15 degrees Farhenheit. After that, it helped, but was not sufficient to fight off the elements without a base layer, and I was left a bit chilled.

The jacket was sorely missed on a couple of memorable spring rides when I elected not to bring it along, justifying a “quick” ride after work, and hoping to be as light and fast as possible. On one of those occasions, which started out as a pleasant afternoon, the winds began gusting up to 40 mph and the temperature dropped from the mid-60s to the low 30s in just a matter of minutes mid-ride, leaving me cursing life and wishing for my MTB Barrier. After that, I learned a lesson and it became, for all practical purposes, my spring riding security blanket.

I have owned several feather- and welter-weight cycling jackets and vests over they years, and each has its own purpose. This jacket is now my go-to jacket for spring and fall riding in Colorado, able to withstand more rain and wind than your average ultralight packable outer-layer.

To be honest, I wasn’t initially crazy about the color schemes that Pearl Izumi chose for the MTB Barrier, but it grew on me quickly. The jacket colors look much nicer in person than the online photos portray. My only quibble is that the zipper is still a little finicky (but improving with use), and I am sure Pearl Izumi would fix or repair it at no charge, but it hasn’t been that much trouble to me… just a small head’s up.

Aside from that, the Barrier is stellar simply due to its versatility and durability in so many different seasons and situations, and the thought placed into the design around mountain biking functionality and wear-and-tear.

Furthermore, in case you didn’t know, Pearl Izumi has one of, if not the best, customer service and warranty programs in the cycling clothing industry. They have always stood behind their products in the past.  If you don’t own a packable layer for cycling, this jacket is one I would strongly recommend looking at.

Thanks to Pearl Izumi for sending the MTB Barrier over for review!