We have postulated before that creating a mountain bike with both rear suspension and 29+ wheels would be extremely difficult, but Salsa has decided to break barriers yet again! (Recall their innovation with fat bikes, including the first production full suspension fat bike.) Yet our theorizing that it would be extremely difficult to fit significant rear wheel motion with a tall 29+ wheel+tire combo without stupid-long chainstays has proven true to an extent, as the Deadwood Sus has very minimal suspension travel compared to other FS rigs on the market: just 91mm in the rear and 100mm up front.

However, Salsa is firmly labeling the Deadwood Sus as yet another installment in their lineup focused on “adventure by bike.” This rig seems to be marketed as a “go-long and explore remote locations” steed, and not a “go big or go home” whip. Despite being an FS rig, the Split Pivot suspension still provides plenty of space in the front triangle for a frame bag. Undoubtedly, we’ll see the Deadwood Sus hitting some of the burliest bikepacking routes in the nation very soon.

Check out this video to see the Deadwood in action:

The Deadwood Sus features a 68-degree head tube angle, 25mm BB drop, 449mm chainstay length, and a wheelbase of 1178.9mm in a size-large. Check the website for full geo specs.

The frame consists of a carbon fiber front triangle and aluminum chainstays in all models, similar to the initial launch of the Bucksaw. The fork and stays can clear tires up to 29×3.0″, but if you want to run narrower, standard 29er tires and wheels, the Deadwood can accommodate (as long as the hubs are Boost-spaced). However, it cannot accommodate a 27.5+ wheel/tire setup–the smaller wheel size would completely throw off the geometry of the Deadwood. This bike is 29er specific. 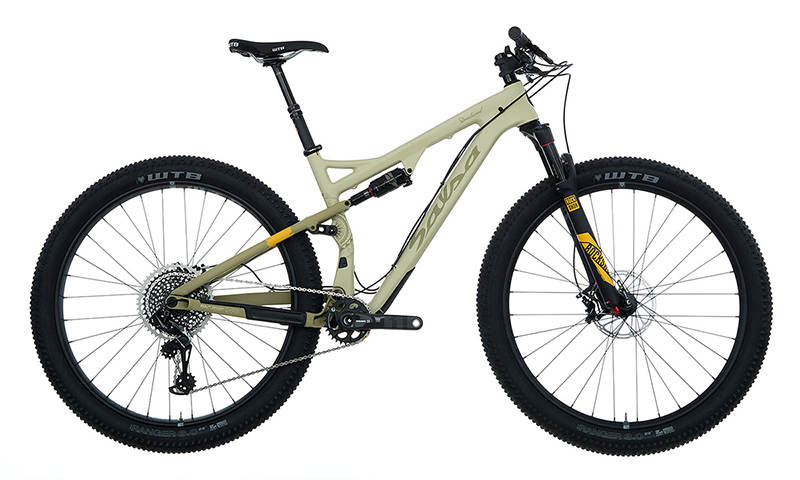 Claimed weight for the size-medium is 30lb 15oz. 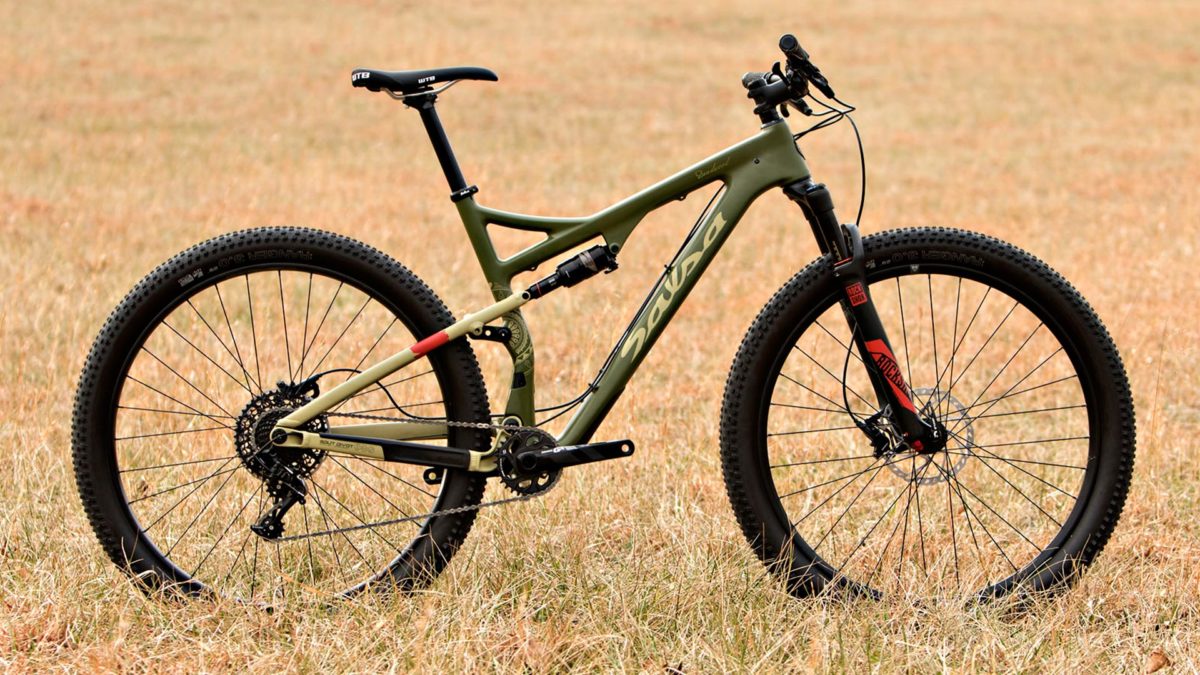 The Deadwood is available in an intermediate price point at $4,499 with an XT build kit, but the most affordable complete build is a GX1 build for $3,799.

A size-large GX1 build weighs in at a claimed 32lbs.

Progression
Sizing Up or Down Plus Handlebar Widths and Crankarm Lengths:...
Gear
The Maxxis Minion DHF Tire is Still the One to...
Gear
These MTB Deals are Fire, including 40% off Patagonia Dirt...
Gear
Never Underestimate the Power of a Good Zip-tie
Subscribe
Login
Please login to comment
19 Comments
Most Voted
Newest Oldest
Inline Feedbacks
View all comments

Good for Salsa–that looks/sounds like a dynamite rig! I’ll be looking for a Salsa Demo Day in my area for sure.

Not bad… looks kinda burly though with those tires… I wonder if any other brands are in the process of coming out with a 29+ FS??

Need to take a lefty route with these. Seatpost does not need to be central nor do rear pivots need to be pinned either side.
Make the seatpost bracket offset to the side and back, that gives you a couple of inches of space that a wheel could travel through without getting in the way of peddaling motion.
Lots of wheelspace right there if you take a different approach. Granted it will look ugly as sin but its there ????

What they’ve done is pretty remarkable if you consider the size of those wheels and the fact they managed to tuck them into 17.6in stays and maintain a 68 degree head angle. You don’t need a ton of rear wheel travel considering those wheels will roll over anything and you don’t live to huck-to-flat. Bikepacking is one application, but for those that don’t mind a 31-32lb bike, this is a fat bike for folks who don’t like fat bikes, and a plus bike for those who don’t like plus bikes. The burly fully rigid Krampus was and is an amazing forefather to the “Sus” that rolled over everything…this bike looks like a monster!

Interesting bike. But someone please help me; why would you call a bike “Deadwood Sus”? I must be missing something.

They used to have a regular Deadwood without suspension, so they added the “sus” to this model name.

So I guess I didn’t make my question clear. Why “deadwood”? I always thoughts of “deadwood” as someone on your team who isn’t contributing? Is there some other meaning?

I guess I’m thinking of “dead weight”, but still what is “dead wood”

Per the dictionary: “Deadwood: (1) a branch or part of a tree that is dead. (2) people or things that are no longer useful or productive.” Hmmmm. Great concept for a mtb … … Still trying to figure this one out.

Lots of SUVs/trucks are named after towns (Kia Sedona, Toyota Tacoma, Hyundai Tucson, etc). Maybe Salsa was thinking of Deadwood, South Dakota in the Black Hills? Aiming for a Western theme, maybe. Having ridden some great trails in the Black Hills, I can easily imagine this bike would positively rip on some of those trails.

Ahaa. There we go. Thanks John. Of course with all your travels and experiences, you would make the connection.

Not the first – Lenz Fatillac was

The one thing that has kept me from going 29er is the lack of 2.5 and up tires for them.

Long before Fat tires were a thing I have been fitting on the widest possible tires on my bike. This is to overcome sugar sand. Where I live the trails get deep pits of sugar sand. Because of the consistency of the soil it does not take many dry days to get sugar sand.

This is great to see. I am an owner of a Trek Stache 29+ and will never go back to regular tires. I am not a fan of 27+ and this bike now is just one more option for the 29+ crowd. I am pleased to see a smaller company like Salsa beat Trek at delivering a full susser to the market. Be nice to give one of these bikes a test ride. And as a side note, Salsa is targeting this bike as an “exploration/bike packing” bike. Your review (well done) mentioned it’s not a “go big or go home bike” yet the video seemed to be all about thrashing the ride. I guess a thrasher video is more exciting than seeing a video of a bike packer all loaded and riding 5 mph. Always a pleasure reading your material Greg!

Don’t think Trek feels a need for their 29+ bikes to have rear suspension. I also own a Trek Stache 29+ and am more than satisfied with the ride characteristics.

2017….and they don’t have internal cable routing? They might as well have gone with 2x or 3x….all kdding aside, maybe they were thinking of the mechanics who will be replacing those cables!

Walt at Waltworks has been building 29+ full suspension bikes for a while now but it’s good to see others are finally catching up.

nothing is new under the sun. they made fs bikes in the 1800s.