Before my recent visit, I knew very little about Santa Rosa, California. I knew it was in Sonoma County, one of the major winemaking regions in the state, but that was about it. The Singletracks database didn’t have much listed in the way of trails for the city, apart from Annadel State Park. Not knowing what to expect, I headed out to Santa Rosa with my girlfriend, Susan, for a few days of riding and exploring the town.

Santa Rosa is a good-sized city with a population of 175,000. A lot of those people like to ride their bikes, because, California. Seriously, it’s dry and sunny every day during the summer, so why not? No sticky humidity, you don’t have to worry about rain, plenty of bike paths… The winters, while wet, are mild, with temperatures in the mid-40s during the day, which makes riding year-round possible. Around town you’ll see all types of people riding their bikes for pleasure, exercise, and commuting.

To support all those riders, there are several shops in town. In downtown alone you have the Trek Store, NorCal Bike Sport, The Bike Peddler, and Echelon Cycle all within a few blocks of one another. There’s even a used bike store–Bicycle Czar–should you want to do some swapping.

The local tourism agency got me in touch with Bret Gave, the manager of the Trek Store. His store has a fleet of Fuel EX 8 29ers for rent, which is what I rode for the week. When I arrived at the shop to pick up the bike on Monday evening, the place was a flurry of activity, even though they were just a few minutes from closing. The staff was friendly and welcoming before they knew who I was–a good sign. Bret came out to introduce himself and fill me in a little bit on the riding I’d be doing that week. 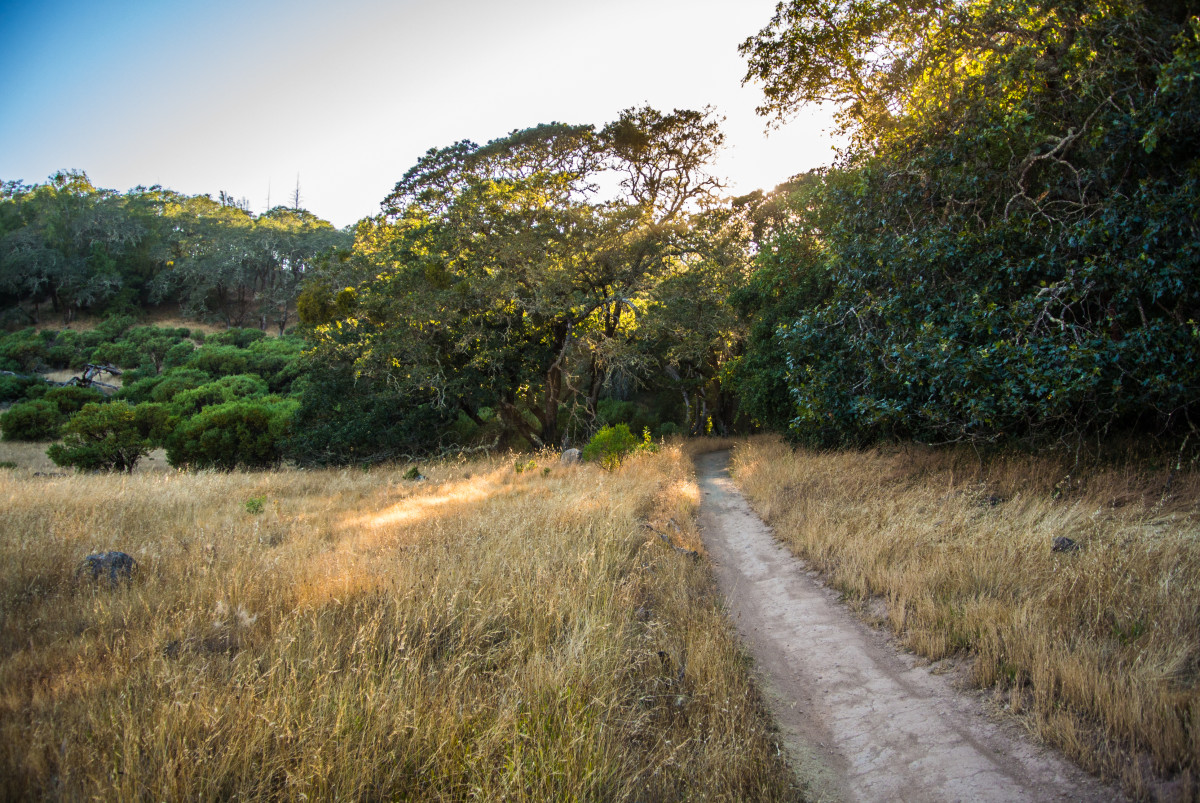 My first ride in Santa Rosa was with the Annadel Mountain Bike Group (AMBG). Every Tuesday evening they meet up to ride the trails in the park. With the 6:30pm start time there’s plenty of time to get a long ride in before the sun sets. The park sits just to the east of downtown–an easy ride from the city. There are actually two smaller parks that connect Annadel to town: Howarth Memorial, a city park, and Spring Lake, a county park.

I was in town during a heatwave, and it was scorching hot even at that late hour. We all stood around sweating until the entire group assembled. Once everyone was present, we set out climbing along the Canyon Trail. Immediately, we were under tree cover where it was much cooler. The trail was wide and littered with rocks. Between the rocks, the ground was hard packed to a concrete-like state, with a covering of dust. Eventually we turned onto the Spring Creek Trail, where the climbing got steeper and more technical. The small talk died down at this point as we all focused on the task at hand. With all the ledges and large rocks, there were numerous opportunities to smack a pedal and lose all momentum.

After a quick roll by Lake Ilsanjo, where some other riders had opted for a swim, we rejoined the Canyon Trail for some more climbing. Part of our group had split off earlier, opting to skip the chunky climb on Spring Creek, and we soon met them at the bottom of the Marsh Trail.

At this point, Marsh Trail was more of a fire road than an actual trail, being wide enough to drive up in most places. We climbed, as someone said, “with a purpose,” but the pace was reasonable. The grade was mellow, but a few random rock gardens punctuated the climb to keep us on our toes. As we rode the Marsh Trail it narrowed, eventually becoming singletrack. Ah, that’s more like it. Picking your way up wide trails with countless line options isn’t my favorite kind of riding. I much prefer dealing with the smaller canvas singletrack provides.

We rode the entirety of Marsh until it intersected with Ridge Trail. Here, the trail tightened even further as it wound around the plateau at the top of the park. For me, Ridge Trail was the highlight of the ride. The pace picked up considerably as the group bobbed, weaved, and dipped our way around the trail. Off-camber corners, loose rock, and quick uphill punches featured prominently. Towards the end of the trail, there was a hard right turn into a rock garden. With the late evening sun shining directly into my eyes and the cloud of dust from the other riders, my only chance was to let off the brakes, hang on, and hope. I–less than gracefully–bashed my way through it. Thankfully we have full suspension mountain bikes and dropper posts for these occasions.

Ridge Trail eventually dumped us back out onto Marsh. From here, we re-climbed the last little bit of Marsh to hook up with South Burma. Like Spring Creek, Burma had some ledgy, rocky climbs. I did my best to follow the locals on their lines, but inevitably there were some awkward line choices and track standing on my part. I’m happy to say that I cleaned the whole thing, though! The climbing on South Burma didn’t last long–maybe a half mile–before we topped out. From here, it was a ripping four-mile descent on South Burma, connecting to North Burma partway down.

The upper part of the descent was wide and chunky, with ample opportunities for trail hucks. As the descent continued, the trail became less steep and technical. It was all smiles and high fives at the bottom as we headed back out through Spring Lake and Howarth to get beers in town.

Every week after the ride, the crew from AMBG heads to Third Street Aleworks. Tuesday night also just happens to be their $2.50 pints and bratwurst night. Coincidence? I think not. What I neglected to consider was that most of the group lives right in downtown Santa Rosa, so they went home to clean up first. I was the only one still sitting around in stinky riding clothes–sorry guys!

Just like our Tuesday night ride here in Atlanta, the group is a diverse mix of ages, bikes, and abilities. But mountain biking–and maybe some beer–bring this motley crew together each week. There was plenty of ball-busting, shit-talking, and inside jokes. It was just like being at home. Many of the members are also active with Bike Monkey, the local race organization. Bike Monkey puts on a variety of events, from road to gravel to XC to endurance. 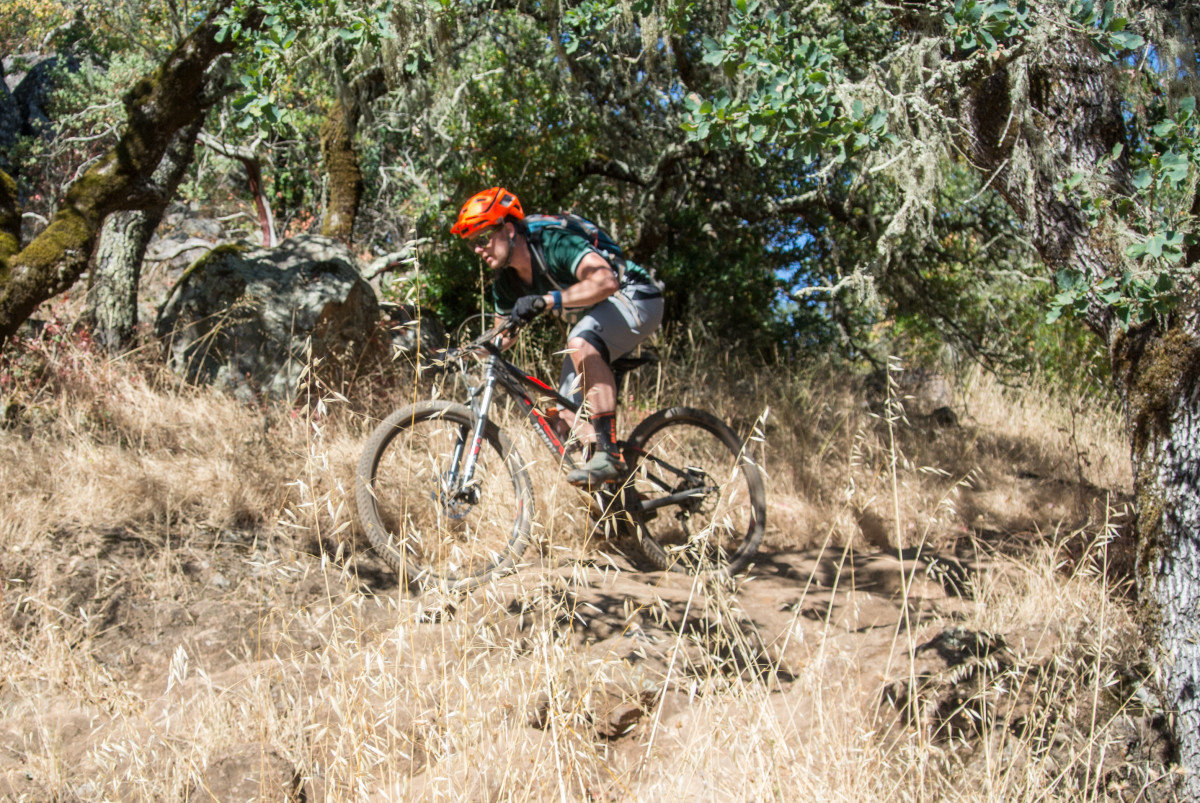 The next day, I returned to Annadel with a local guide for a ride on some lesser-known trails. Compared to what I had ridden a day prior, these trails were completely different. Instead of the wide trails, endless line options, and shallow grades, these were tight and steep. So tight, in fact, getting poison oak here was a distinct possibility. It was everywhere. Similar to some other trails I’ve ridden in California, the descents were punctuated by short, but insanely-steep sections. I definitely found the limits of traction here. While I enjoy these sections, they aren’t my strong suit since I don’t have anything nearly as steep back home.

Gear
Would You Rather Ride with No Suspension, or No Dropper...
Gear
Harley's New Electric Hardtail [Gear Watch]
Gear
We Tested 5 Tubeless Tire Sealants to See Which Ones...
Progression
How to Ride Flat Corners on Your Mountain Bike
Subscribe
Login
Please login to comment
1 Comment
Most Voted
Newest Oldest
Inline Feedbacks
View all comments

Pass on those brutally-hot trails! The treed ones of Annadel look to be more my speed.