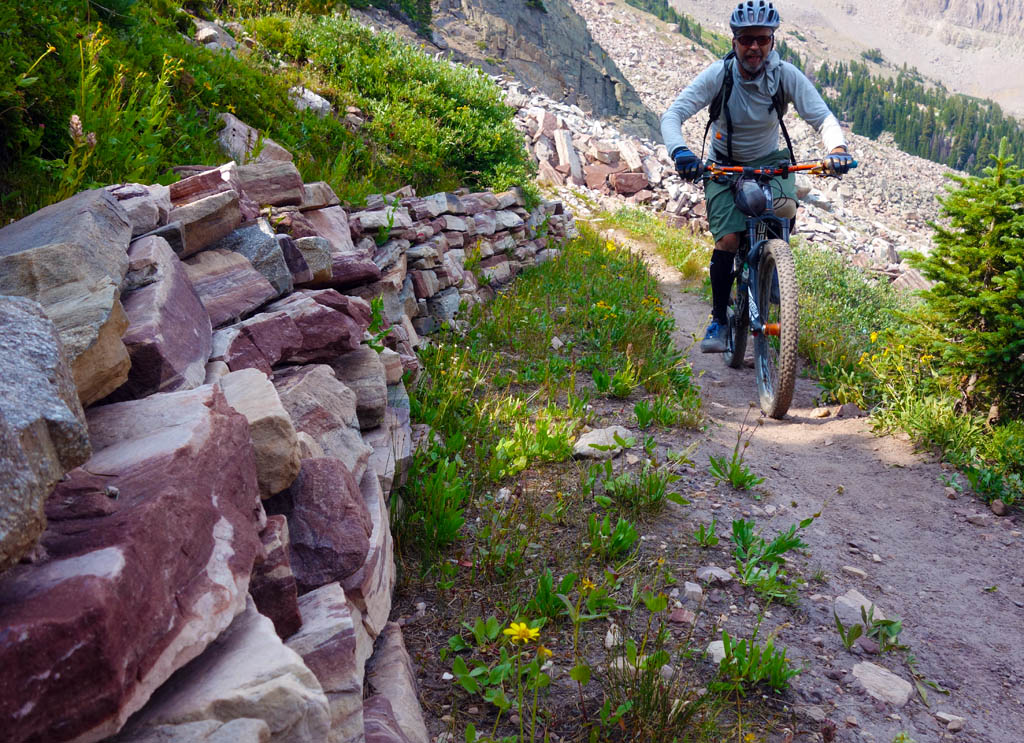 This is part two in a three part series exploring mountain bike trails that are under threat of closure in Montana due to Wilderness litigation. Read part one here.

We took our sweet time getting from Hamilton to the Lionhead area, driving due east over Skalkaho Pass, then made our way to the area I’ll euphemistically call “West Yellowstone.”

Eventually we found the highly recommended Cliff Point Campground. Its blue, cold waters, refreshing lack of cell service, incredible night skies, and silent nights would become our base camp for this part of our trip.

And what a great spot! The high plateaus of Montana stretch flat, allowing limitless views from Butte to Ennis.  This plateau is 2,100m above sea level, which typically means glaciated terrain a bit farther north in Canada. Lionhead peaks and passes within Henry’s Lake Range soar another 1000m higher. There’s definitely an oxygen-shortage issue for sea-dwelling Canadians like us.

There are too many classic rides to count in the Lionhead area. One thing each has in common is their backcountry nature and a distinct lack of bailout options. You must be prepared to be self-supported. You should be able to deal with grizzly bears (hopefully by avoiding them.) You should be a competent rider. The trails are in good shape, but they’re long and out there, so expect the unexpected.

It was a challenge to figure out routes from contour lines and maps. We had limited time to get a good sample of the terrain. So many of the trails can be ridden bi-directionally and in different combinations. Fortunately we were joined by Teton valley locals Lynne and Dan.  I also had the benefit of advice from local trail guru Corey Biggers (who unfortunately couldn’t join us).

In the end we rode the portion of the Continental Divide Trail (CDT) that starts from Targhee Pass and travels north, passing the classic Watkins/Sheep Creek junctions. We then split the group; Shar and Kevin went down Targhee Creek. Lynne, Dan, Lucky the wonder dog, and I continued on the alpine goodness north and then west crossing the Targhee Peak divide and descending to Mile Creek.

The CDT is a study in the schizophrenic contrasts and ludicrousness that is US Forest Service land policy.  While one federal FS Region on the Idaho side built singletrack winding its way from treeline to alpine, another federal FS Region on the Montana side places existing singletrack into the pariah-status of Wilderness Study Areas. Cross a state boundary and suddenly biking becomes impure; thrillcraft wreckreating in the sacrosanct, hallowed Wilderness.

Nevertheless the CDT, particularly from Watkins to Targhee Peak Divide then to Mile Creek’s junction, is a tremendous high-alpine biking experience replete with outstanding views, sublime singletrack, lactic-acid climbs, and terrain that goes on forever. Even to Lynne and Dan it was something new as they’d not done that combo in that direction. We rode our bikes. Had fun. We might have even made some whoops of joy. Sorry, not sorry! 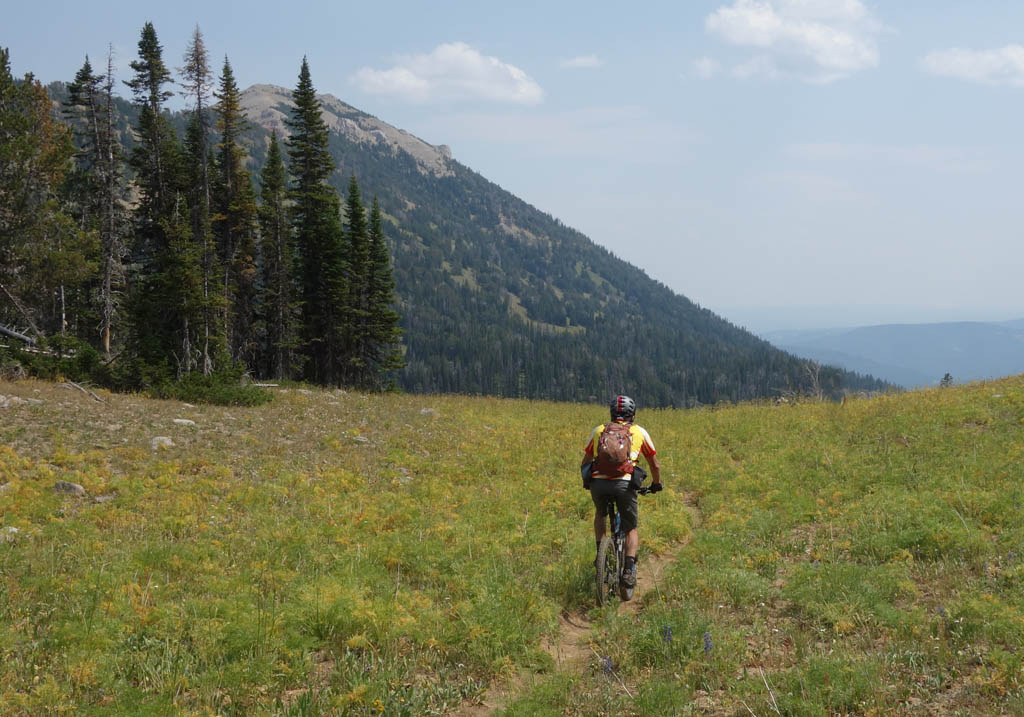 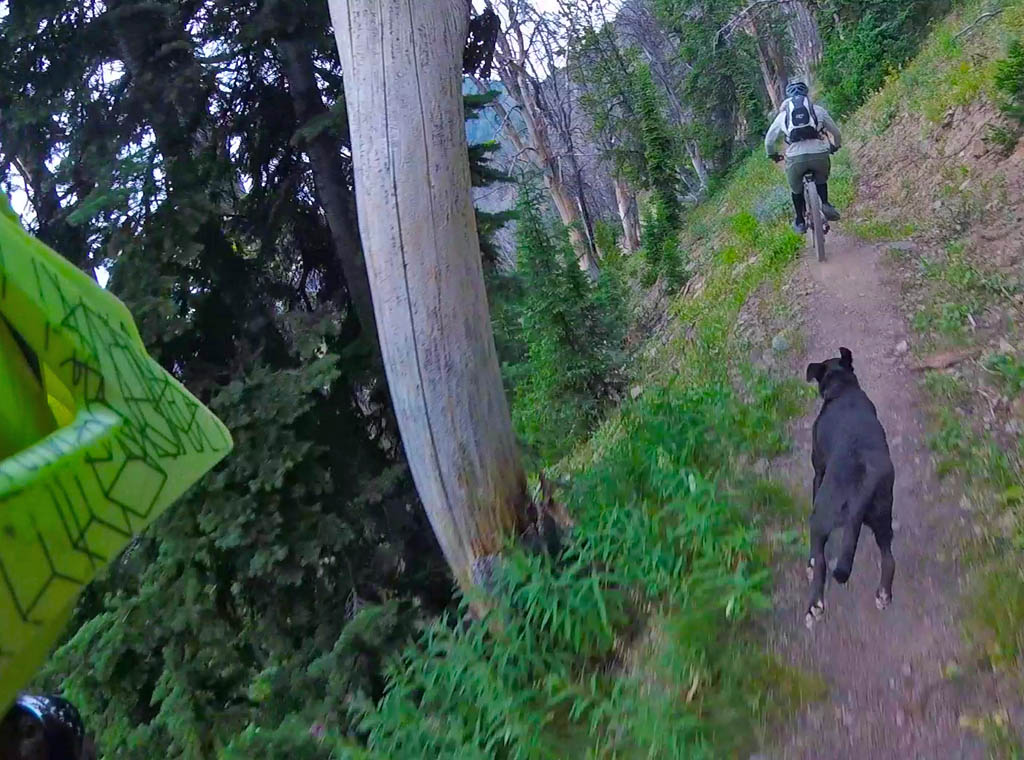 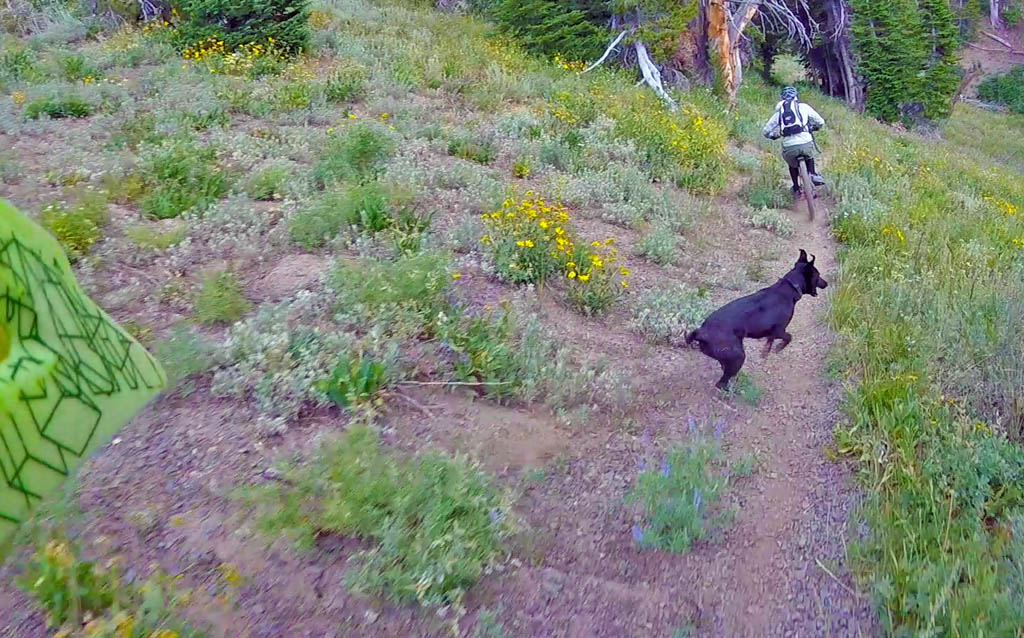 This is a rarity in the Lionhead and is also known as CDT Two Top. We did it as a relatively mellow 18km out-and-back trail with only 473m of elevation gain/loss. It’s a pleasant ramble mainly in the trees for a rest day. The bonus is that the downhills (and uphills) are of the manicured, fast variety.

It’s possible to do this as a one way all the way to the Big Springs road which would make it a slightly longer, approximately 26km ride. But this requires a car shuttle unless you’re up for road riding about 40km into a headwind to get back to the start. Count me as a no on that. 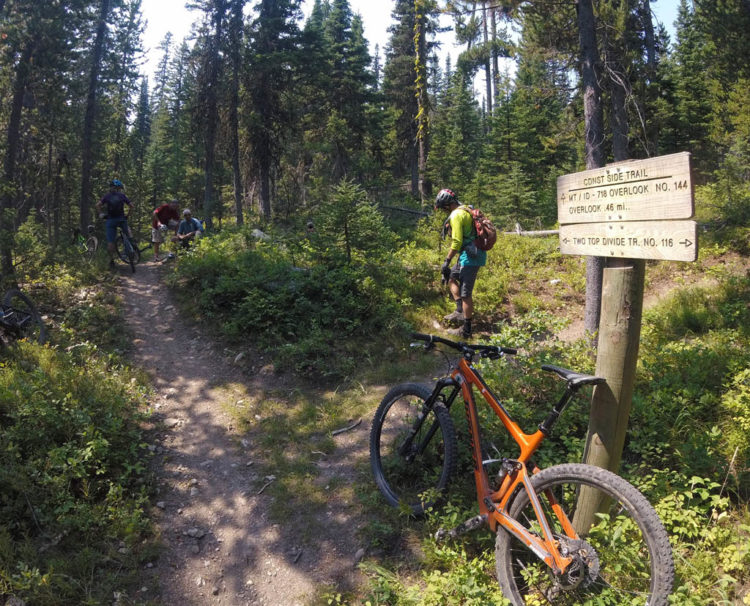 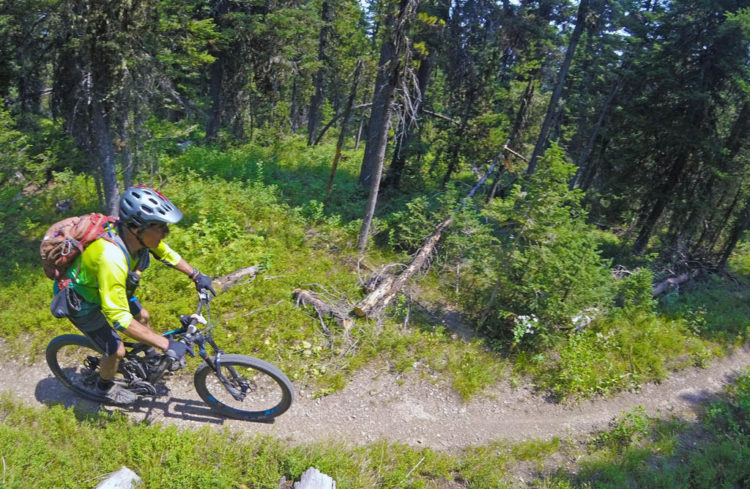 One option which did not materialize was for us to ride with local Lionhead guru Corey Biggers. Corey is a business owner in the area and a renowned local horseback and mountain bike rider who has singlehandedly done wonders for bridging the two communities. He’s also a tireless trail maintenance volunteer, as well as the go-to person for the obscure and undocumented Centennials Range traverse, which he’s kept clear for riding. I promise to come back for this Corey!

Wilderness and the Lionhead

Not all is perfect in the Lionhead. US Forest Service Region 1 recently proposed closing the Sheep Creek and Coffin Creek areas of the Lionhead trails. This particular forest district (the Custer-Gallatin district) already closed the classic Gallatin Crest in 2012, buckling under pressure brought on by Wilderness movement litigation.

How did the US Forest Service’s land management policies (particularly Region 1 of Montana) become so anti-bike? This article asserts that it started from pretensions of objectivity, but became entrenched in subjective attitudes of hierarchy and superiority. Simply put, the USFS is tasked with administering some lands as “Wilderness” in the legal sense of the US federal Wilderness Act. However, there is a a strong Wilderness movement in the US with attitudes that are problematic when it comes to sharing public recreational lands with other users. The Wilderness movement is comprised of people who mythologize their own purity while demonizing any and every other activity that doesn’t fit their own vision. In short, hiking, horseback riding, and skiing are pure. To many Wilderness advocates, mountain-bikers are SATAN.

The second way this happened is the classic American way: Lawyers got involved. US Forest Service legal and consultation processes are geared toward adding more Wilderness, which by definition excludes bikes. There is an absence of a process to set aside or reserve land for high-value recreation. Therefore the bent for the Wilderness movement is to litigate for more Wilderness.

And litigate they do. Accordingly, US Forest Region 1 (which means Montana) acts in ways so as to not get sued by Wilderness advocates. Suing the US Forest Service is so lucrative (costs get awarded to lawyers on contingency when they win), that there is a Bozeman, MT law firm on retainer whose primary business is suing the Forest Service.

How much money are we talking about? As recently as 2012, the USFS Region 1 legal bill for Gallatin Crest closures was $170,000. This was 15% of their 2012 Recreation budget, and the costs are only due to one of the many lawsuits filed against USFS Region 1 by the Wilderness movement in Montana that year. An academic study of USFS Region 1 litigation expenses confirms the trend has continued over time. Suing the US Forest Service, particularly Region 1 is lucrative indeed!

Wilderness and its technical, legal meaning

How does the US Forest Service’s Region 1 supplication to Wilderness advocates manifest itself? This DOJ article describes the technical legal meaning of Wilderness as it’s currently interpreted. Capital W Wilderness are lands preserving “an area where the earth and its community of life are untrammeled by man, where man himself is a visitor who does not remain.” The law specified that “there shall be no commercial enterprise and no permanent road” in Wilderness. Also forbidden are “temporary roads, no use of motor vehicles, motorized equipment, or motorboats, no landing of aircraft, no other form of mechanical transport, and no structure or installation.” Subsequent court interpretations confirmed that Wilderness lands are closed to mountain-bikes.

There are is a movement by the Sustainable Trails Coalition to mitigate the wholesale prohibition of bikes from any area designated as Wilderness, but as it stands, Wilderness means no bikes. Let’s delve into the alphabet soup of Wilderness land management jargon to see just how badly the process is perverted so that even areas not designated as “Wilderness” are slapped with mountain-bike prohibitions.

At the outset, we start with the proposition that the Wilderness movement is geared towards adding more Wilderness. Donors want their names on Wilderness. Staff payments are bonused for Wilderness. However it isn’t that easy to get new Wilderness lands designated. This requires an Act of the US Congress, an institution of recent times not known for its expedient decision-making and/or decisiveness.

In and of itself, US law has settled on the precedent that mountain-bikes are prohibited from federal lands that are designated as Wilderness (this article dives into the mess of that particular issue itself) but it’s out of scope for this analysis. Suffice it to say that it’s difficult to create Wildnerness lands. If that was where the cards were dealt, it would still be suboptimal for mountain-biking access but not disastrous. Unfortunately the Wilderness movement has found a new legal mechanism to expand Wilderness without going through Congress by using a litigation wedge to obtain Wilderness protection for lands not formally designated by Congress as Wilderness

The key of the Wilderness movement’s litigation strategy is that this trinity of WSA, RWA, and IRA can be established at the Forest Service local level. These lands can be created by the decision of the US Forest Service bureaucrats.

It doesn’t quite end here. It used to be the case that different US Forest Service regions and districts administered the quasi-wilderness trinity differently. Some allowed mountain-bikes in WSA, RWA and IRA. Some didn’t. The only thing consistent in FS decisions is inconsistency. This has now changed in large part due to recent court decisions; one of which is the court decision closing the US Forest Service lands in the Bitterroot Valley to mountain-bikes.

Whew that was a long, boring rant. Here’s a bullet-point summary for the attention-deprived.

Stay tuned for part three of the series where Lee explores more excellent trails in Montana, and we offer ideas for defending mountain bike access in Montana and beyond.