On most Tuesday nights I go for an in-town night ride on the east side of Atlanta and it’s often the highlight of my week. Some Tuesdays there are more than a dozen mountain bikers, other nights it’s just one or two of us. We ride all year long and in pretty much all conditions (unless it’s actively raining) and grab pizza and beer after the ride. I factored the Tuesday night rides into my 29 Day schedule but out of 4 Tuesdays, every single ride was rained and/or snowed out. Unprecedented. 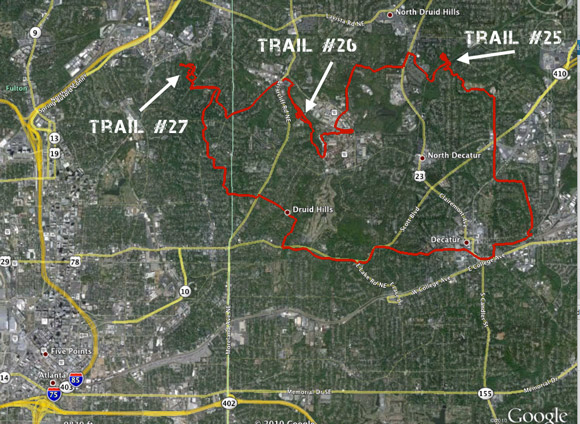 So yesterday, after at least an inch of rain fell the night before, I rode to 3 of the trails we typically hit on Tuesday nights. None of the trails are very long (most are just 1-2 miles of singletrack) but there’s a surprising variety within them all. With 4-5 miles of road riding between each trail I had a good workout ahead of me. I was a little worried things would be completely wet and muddy but every one of the trails was in great shape – better than many of the trails I rode last week that had 4 days to dry after a rain! 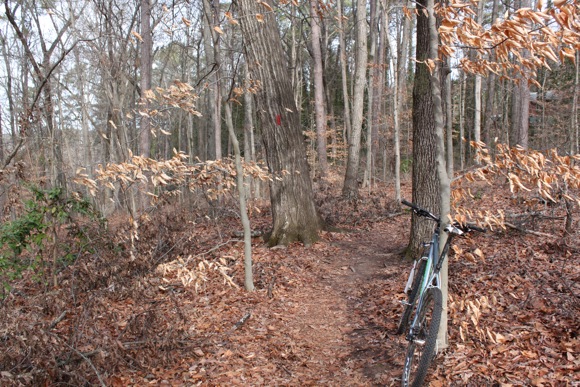 The Mason Mill trails are the closest to my house. A couple years ago the county installed a paved path right through the middle of some choice singletrack but somehow the best stuff survived – much of it just crisscrosses the path now. If you know where to go in the park you can easily ride 4 miles of singletrack without too many repeats, making this one of the biggest trail systems I know of inside the perimeter. The “Waterworks” section is actually where I did my Chainlover photo shoot last year. 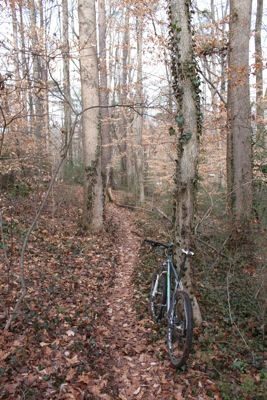 It’s crazy how different mountain bike trails can seem at night vs. during the day. Thinking back, I’m pretty sure I’ve never ridden Peavine Creek during the day and yesterday I was struck by just how amazing these trails are, especially given the location. Steep climbs, well groomed singletrack, and tricky, narrow bridge crossings make this a fun place to play on the bike. I was amazed at how dry everything was after the rain – few engineered trails I’ve ridden drain as well as this unofficial trail network does. 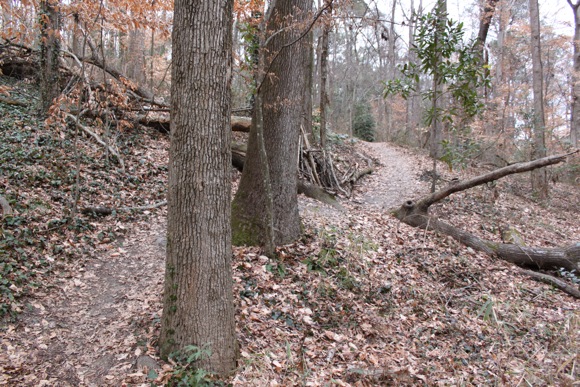 The trails at Morningside were constructed with mountain biking in mind thanks to Atlanta’s SORBA chapter. The 1-mile main loop was machine cut and flows better than anything else in town. It’s also officially open for night riding whenever you want – posted park hours are 6am to 11pm. A new suspension bridge was recently constructed, though unfortunately it’s not bike-friendly (nor are the trails on the other side of the bridge – believe me, I’ve checked).

I didn’t see a single person (walker or biker) during my ride yesterday which was surprising given the urban-fringe locations of each of these trails. I clocked almost 21 miles round-trip from my house which was a great training ride for sure. Bagging 3 more trails so close to home made it even better. Just 2 more trails to go!

Gotta love Urban Singletrack… and especially when you have a hard time telling that you’re actually inside the metropolis. Very cool!

You wouldn’t happen to know if they still host that night ride event on Tuesdays, would you? I recently heard about a night ride event every Tuesday night at 8:00pm. The meetup was at the Flying Biscuit on McClendon. Could this possibly be the same event? I’m very interested in night rides now that I have the lights ready to go!

Yes sir! The dirty mustache ride is still going strong. Meet at the flying biscuit at 830p and stay for pizza after the ride at 11. I won’t be there tomorrow since I’m traveling but am a regular.