This weekend I loaded up my bike and drove to Augusta, GA for days 14-16 of my 29 Trail challenge where I notched some of my best rides yet. Clear skies, tacky trails, and good company are the best you can ask for out of any mountain bike trip and Augusta definitely delivered. 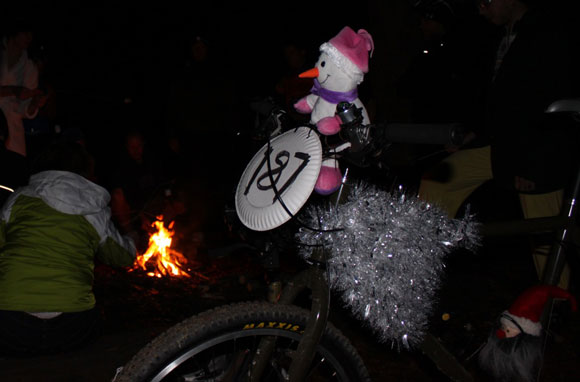 On Friday night I hit the Pumping Station trail (aka Canal Singletrack) where dgaddis and Drew from Andy Jordan’s Bicycle Warehouse organized the Moonlight Time Trial. The whole affair was super low key with winter-themed costumes, a bonfire, and marshmallows – definitely my kind of event.

The course itself is a fast, 2.5 mile singletrack loop and having ridden the trail a few times years ago, I was pumped to give it my best shot. Within the first quarter mile I realized I didn’t know these trails very well at all – there seemed to be side trails and options at almost every turn! At one critical junction I went right instead of left and before I knew it I was riding under an overpass where the trail quickly died out. Turning around, I could see a light across the retention ponds so I sprinted back to follow the rider in front. 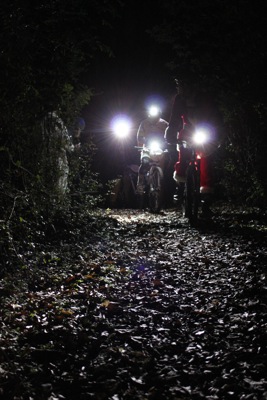 At this point I was doing well and catching up to the rider ahead. Going into a sharp turn I tapped the brakes a bit then accelerated out of the arc when – snap! My right pedal was gone. Heart racing, darkness all around me, I couldn’t quite comprehend what was happening. I propped the bike up and ran back down the trail, looking for my pedal. I found the shiny pedal a few yards back and frantically started trying to screw it back in but for some reason the pedal just wouldn’t go. As riders passed, everyone asked if I was ok I answered yes – I was sure I could get the pedal back in if I just concentrated.

After the last rider passed me I decided the pedal wasn’t going to go back in and that I might have better luck back at the campfire. I limped back with my left foot clipped in, right leg dangling, just hoping that I didn’t get lost again.

Back at the start, I saw that the crank thread had been stripped when the pedal popped out. Apparently the pedal had worked itself loose during the ride and was barely hanging on when I accelerated, ripping out the last 2-3 threads. Drew offered to tap my crank at the shop the next day, an offer I promptly took him up on the following morning. Good as new! 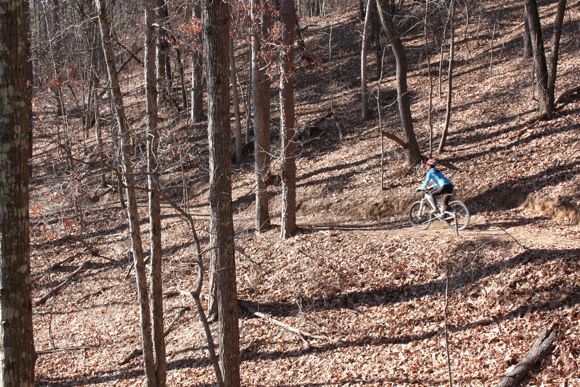 The Augusta area is home to the Forks Area Trail System in the Sumter National Forest and it’s one of the reasons IMBA decided to hold their bi-annual summit in Augusta last year. It’s an official Epic trail and with good reason: 30ish miles of flowy, scenic singletrack that’s accessible to everyone from beginners to advanced riders. 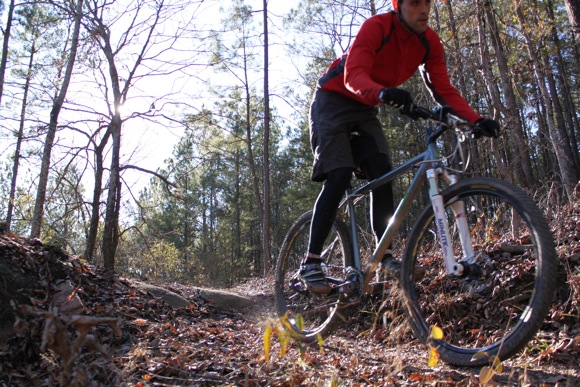 On Saturday mudhunny and I hit the trailhead at around 2pm and planned to meet up and ride with Paul, one of my riding buddies from Atlanta. Standing at the car, we were surprised to see Paul emerge from the trail – on his mountain unicycle! Apparently the fork on his single speed died after riding 28 miles before we arrived so he hopped on his muni for another 10 miles of riding. Needless to say, he must have been spent after that so we bid him adieu and hit the trail.

This time around we chose to ride the Deep Step trail which neither of us had ever ridden. The loop is typical FATS with flowy decents that seem to last for miles with very little pedaling. At the road we decided to ride to the North Trailhead and jumped on the Tower loop (my current favorite) before returning to the car. For those keeping track, we rode just 2 out of the 6 FATS loops. As tempting as it may be, FATS still just counts as 1 trail on my journey. 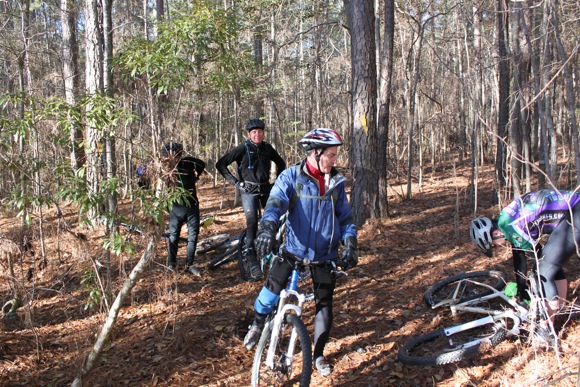 On Sunday morning I met up with dgaddis, seenvic, Mark, and Hobby to ride the Keg Creek loop on Clarks Hill Lake. Keg Creek was the only area trail I had yet to ride despite riding in Augusta for more than 15 years, which says a lot about the number of trails to choose from. It was cold at the start (29 degrees) but the sun was out and conditions were good.

Of all the trails I rode this past weekend, Keg Creek appeared the least traveled and I was surprised at the number of roots along the way (which is probably why 3 of the guys were riding FS bikes). Near the end of the loop seenvic, dgaddis, and Mark ducked out on a doubletrack toward Mistletoe State Park while Hobby and I rode back to the trailhead. 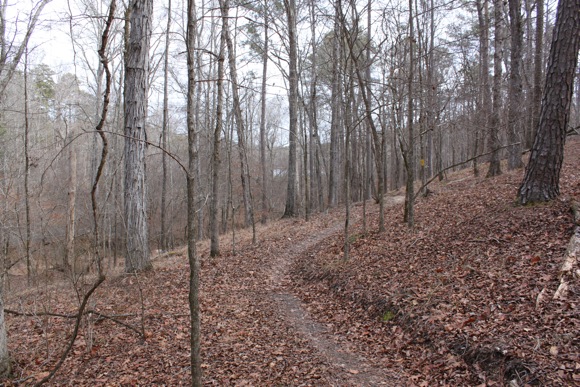 At the car I reset my GPS and headed for the Bartram Trail and Wildwood Park. Although I had never ridden this section, I was quite familiar with it. Fifteen years ago the trail was seldom used so my younger brother re-blazed this portion for his Eagle Scout project. Before the project began the two of us attempted to follow the faded yellow blazes from Washington Road into Wildwood Park but we got lost and bushwacked our way back to the car.

With a group of Scout volunteers, my brother and I returned and broke into two groups, each with a walkie-talkie (no GPS back then). Each group followed the trail until it disappeared and used the radios to link up in the middle. With fresh blazes and improved bridges, we opened the trail to hikers once again (though no one rode bikes on the trail back then AFAIK). 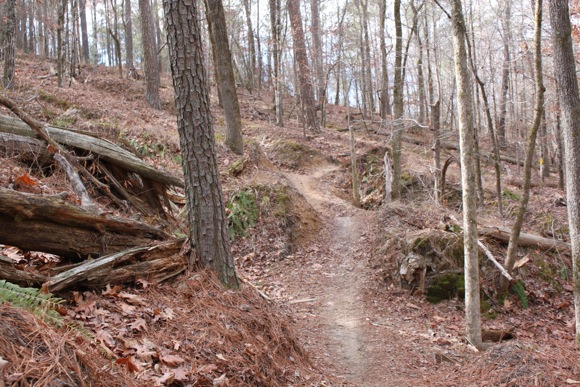 These days the trail has been improved even more and it was surprisingly well worn on Sunday (much more so than Keg Creek). I rode to mile marker 13, about 5 miles in, and headed back toward the car. The trail actually continues on to Petersburg Campground and eventually to West Dam for about 20 miles of singletrack. Woot!

Today is day 17 of 29 and so far I’ve notched 10 trails, meaning I’m a week behind. Not to worry though – trails 11 and 12 will be ridden before the day is done! Thus far I’ve averaged about 9.5 miles per trail and I’ve ridden in 2 states (GA and SC), hoping to add a third state (AL) this week. Fingers crossed that the weather stays dry!

Good job man, that sounds like an awesome weekend of riding!

It was good riding with you trek7k, too bad your pedal came out at the TT. Here’s some more pics from the TT: http://forums.singletracks.com/viewtopic.php?f=101&t=5765

Jeff,
You missed out on the best part of the ride on Sunday. This is a good route. Perhaps one of the best in our local…and I think about 6 people have ever ridden it.

Way to go, Goo, hogging the spotlight on the Singletracks Facebook page… 😀

Jeff, thanks for the ride. I enjoyed the company. Hope to ride with you in the future..

[…] wall of my garage.  I’ve even helped host a lot of races–everything from a local mid-week night time TT where you get a bonus for wearing a costume (or racing without a light!) to being “THE course […]