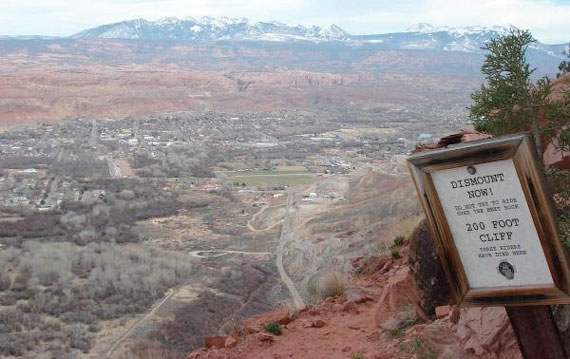 Last week the Team Fezzari blog posted a list of the 8 most dangerous MTB trails in the world and while they admit it’s not a scientific list, it’s an interesting start. Old favorites like Porcupine Rim in Moab and Yungas Road in Bolivia made the list but so did Bootleg Canyon outside Vegas and Black Mountain in western North Carolina. Then again, most mountain bike trails are only as difficult as you make them anyway…

Here on singletracks we’ve been asking our members to rate trail difficulty on the IMBA scale that closely parallels the standard ski slope rating many of us are familiar with. On that scale, double black diamond is the most difficult rating and so far less than 1% of the 3,100+ trails on singletracks have warranted that mark. Here they are in order of increasing difficulty (only trails with at least 2 reviews are included):

Curiously Porcupine Rim is rated just a single black diamond by singletracks members so that tells you something about our list above! What other dangerous MTB trails are we missing?

Videos
Pro Mountain Bikers get ROWDY at Mt7 Psychosis as part...
Trails
Venturing into the Arkansas Wilderness: Riding Upper Buffalo Headwaters
Community
The Most Technical Mountain Bike Trails in the World
Trails
News: Phase I of the Apex Trail Reopens in Golden,...

Its all relative really, it depends on ‘who’ is doing the rating and what ’real’ experience they have had. Kind of like Forbes Magazine printing a list of top MTB places in the US- are you F’n kidding me? Based on what? How many fine wine and Hummer dealerships are within a 50 mile radius?
The Yungas Road is a dangerous road, not a dangerous MTB ride (but it is on my to-do list!). The Flume Trail is a great trail with fantastic scenery but its not a great MTB trail like Ive heard it classified, its all relative.
I like our rating system best even though it isnt without its flaws. I have not ridden most of the trails on our list but would go fighting backing up the fact it is fairly accurate. The Porcupine ridge trail probably didn’t make it because of the types of riders who set out on that trail, they have a pretty good idea of what to expect before they do. There are some nasty areas and some serious exposure where a mistake could really cost you. And a lot of these are towards the end when your legs are tired from the previous 15 miles, so yea its dangerous. Seeing Northstar ski resort on there makes me laugh- I know why its there; novice riders come up from the Bay area & Central Valley to ride it and have the adrenaline rushed time of their lives which is great, but they in turn think its dangerous and give it a black diamond rating. While living in Reno I would drive up there and instead of taking the lift would ride up the mountain and then bomb down. Exciting yes, dangerous? No.
How someone rates a trail is all relative to the experiences they have had up to this point in their riding career. By using the standard from IMBA we can at least have a guideline to go by.

…and we have 3100 trails on Singletracks? Thats Awesome!

I don’t know how much stock I’d put into that 8 trail list. For instance, the pictures they talk about for the Cliffs of Moher is just Hans Rey doing what Hans Rey does best…being an insane trials rider. As I recall, there isn’t an actual trail there, just a few spots to get incredible shots of you having gigantic stones…but you have to carry your bike to those spots.

What has been rated by the users using the trail reviews system is the difficulty of the trail. Yes, big drops and stunts can be very dangerous. However, I think a trail like Porcupine Rim or something of that nature could have a single black or even a blue technical difficulty and still be the most dangerous trail anywhere. The reason rests on one key word: exposure. The trail could be mild and flat, but if it’s only 10″ wide and rests right on top of a 150′ cliff… well then that’s sketchy!

Exposure is what I think of when I think of really, really dangerous, and it looks like that’s what the authors of the original list cited had in mind.

Good point Goo, difficulty and danger can mean different things. Although we don’t explicitly mention it on the singletracks trail rating chart, the IMBA ratings do ask you to consider exposure and other factors as well:

Don’t forget to consider trail qualities beyond the objective criteria… For example, exposure – the feeling of empty space next to and below the trail tread – provides an added psychological challenge beyond the steepness or roughness of the trail. A 3-inch rock seems like a boulder when a 50-foot drop looms on your side! Other qualities to think about are corridor clearance and turn radius.

Our Facebook fans mentioned one trail where the biggest danger is perhaps mountain lions on the trail. Now that’s something the rating doesn’t take into account! 🙂

Mountain lions? Where is that?

Just saw this thread so I thought I’d give it a bump with a +1 for Elizabeth Furnace, at least for difficuty, not necessarily danger. That trail had me walking more than any other, including the tougher trails in Fruita, Moab, Sedona, etc. Parts of it are more like a trails course than a bike trail. Whoda’ thought the lowly Virginia Applachians would throw more challenge than the toughest rides in the big bad Rockies?

I’d have to add to the list the Rock Creek trail above Arlington Wyoming–super-long, razor sharp (bring some extra tubes!) scree fields above insane exposure where a fall might be your last. A true adventure to be sure!

Deer Creek Canyon? Huh? That trail is sedate. Maybe If you count Hikers and dogs clogging every corner on the weekends.

A trail called “Follow the Leader” at Sandy Ridge just outside Mt. Hood Oregon is a double black singletrack trail that can be very dangerous. I rode this trail during a rainstorm and there were countless times where I was within 3 inches of slamming my shoulder into trees or boulders. On some areas the trail narrows down to a foot in width and the terrain is hard for experienced technical drivers. There are also many drops, some if you overshoot you will be biking directly down a nearly vertical pitch full of fallen trees.

[…] Most dangerous mountain bike trails in the world […]