We knew going into it that the Upper Buffalo Headwaters Trail System was in the middle of nowhere–close to two hours of driving from our base for the weekend in Bentonville, Arkansas. But as we left the city limits of Fayetteville and the safety of cellular phone service with the GPS still showing another hour and a half of driving ahead of us, the feeling really set in.

As we left the interstate behind, complete with the college town vibe of Fayetteville and the surprising blend of hipster culture and blue collar industry in Bentonville, we found “No Service,” twisty highways, and the rundown mobile homes that characterize mountain living in the South.

After living in Georgia for five years, I never mentally connected Arkansas with the rest of the South. That’s likely because Georgia, along with South Carolina, Alabama, and Mississippi, is classified as the “Deep South” — the core of everything Southern. But as we twisted through endless forests, passing rundown single-wides displaying the Confederate Flag proudly in their windows and on their porches, liquor stores open at 9am in the morning right next to Baptist churches, I felt weirdly at home, a return to mountain living in the South.

As we plunged deeper into the mountains, we came around a corner and spotted a couple of vehicles pulled off on the side of the road, with mountain bikes hanging over the tailgate pad of a Toyota pickup. We pulled over to see if we were still heading the right direction, and for a feeling of mountain bike solidarity in a foreign land. As it turned out, these guys were the friends and soon-to-be-friends that we were meeting, who were going to show us around the middle-of-nowhere trails at Upper Buffalo.

As we prepped for the ride, I realized that I had made (or almost made) a grave mistake: I was underprepared. It was mid-March and I had anticipated this trip to Arkansas as a spring break escape from the Colorado cold, but the day had dawned gloomy and overcast–and temperatures this high in the mountains measured a full 10 degrees cooler than they had in Bentonville. With the mercury right around 32 degrees, I pulled on all the layers I had packed, still shivering in the parking lot.

We were an odd crew: 8 riders representing 4 different states, and while we did have a couple of Arkansas natives with us, not a single soul hailed from that region. We were all tourists, heading off into the highest mountains in the Ozark Mountain Range. Indeed, our starting point was just a mile from the highest point in the Ozarks, so we began by pedaling to the very top and taking in the view–albeit a gloomy, gray view.

From there, it was all downhill–for a few minutes at least. The ripping descent filled with limestone, clay, sharp switchbacks, and the occasional downed tree immediately reminded me of mountain biking in the Appalachians of North Georgia or North Carolina–twisty trails, deciduous forest, and plenty of dampness to endure. The 32-degree temps didn’t feel so bad once we dropped out of the wind and into the valley and got our heart rates up, until we had to splash across a frigid stream–stream after stream after stream. Yep, just like riding in the Appalachians.

The name for this area is quite matter of fact. The streams begin from springs in this area and feed the mighty Buffalo River. Here, at the source, the water is pure and so blue that the deep pools display an aquamarine hue. The streams and pools don’t look real, like something out of a sci-fi movie, yet here they were. We froze our toes with each stream ford, reclaiming dry singletrack on the other side. 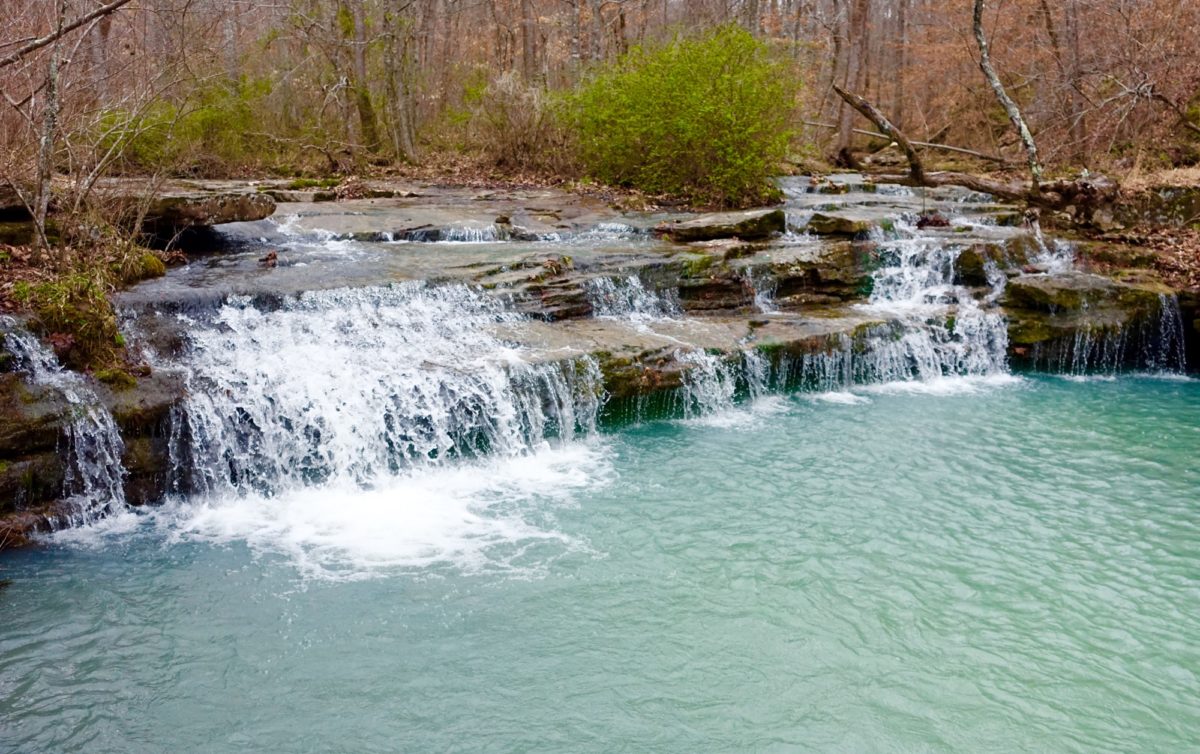 Starting at the high point of any ride isn’t my preference, but that’s the only choice available to the mountain biker here. But as we bottomed out at the creek, we immediately began climbing up the next ridge, progressing deeper and deeper into the trail system. I knew we’d have to turn around and eventually go back up the series of ridges that we first descended, but for the moment I tried to put that thought out of my head and focus on the sweet, sweet singletrack in front of me.

Upper Buffalo is the old school, backcountry side of Northwest Arkansas’s new school trail building coin. While there are tons of rocky, techy, challenging bench-cut trails here, occasionally we’d hit sectiona that had obviously been built by machine and while not a certifiable flow trail, these sections had low berms, rollers, and air opportunities.

As we traveled deeper into the system it became painfully clear that while our guides had ridden here before, not a one of us was a true local. We found maps at all the intersections, though they were difficult to read. Despite having a decent app to help us, still the numerous intersections in this maze of singletrack had us debating the best route to take, and caused a few of us to get separated, albeit momentarily.

From an outsider’s perspective, the navigation here was anything but intuitive. A web of ridges, valleys, streams, and cliffs meant that there was no simple up-down component or east-west/north-south compass rose to follow. Sometimes we’d have to go what felt like the wrong direction to reach the top of a technical trail filled with rock gardens, ledge drops, and root webs so that we could enjoy a ripping descent down it, instead of a painful hike-a-bike to the top.

As we wandered around that maze, the middle-of-nowhere feeling we tasted while driving to the trailhead truly hit home, as I realized that we hadn’t seen a single road since leaving the parking lot. Even in the most complex and convoluted trail systems in the Appalachians, generally the maze of singletrack is bisected by a gravel road or two that can be used to get one’s bearings, or easily bail out of the network.

And I loved it.

Riding in the Upper Buffalo Headwaters is as close to true Wilderness mountain biking as you can get–no cell coverage, no roads, no people, nothing except mountains, rivers, and singletrack. In fact, this trail system is located right outside of one of Arkansas’s Wilderness areas, by the same name.

While I’m a staunch proponent of bikes in Wilderness, I found this trail system to provide an true Wilderness feel, while still being designed primarily for bikes. While foot traffic is also allowed on these trails, horses are banned, as are all forms of motorized travel. 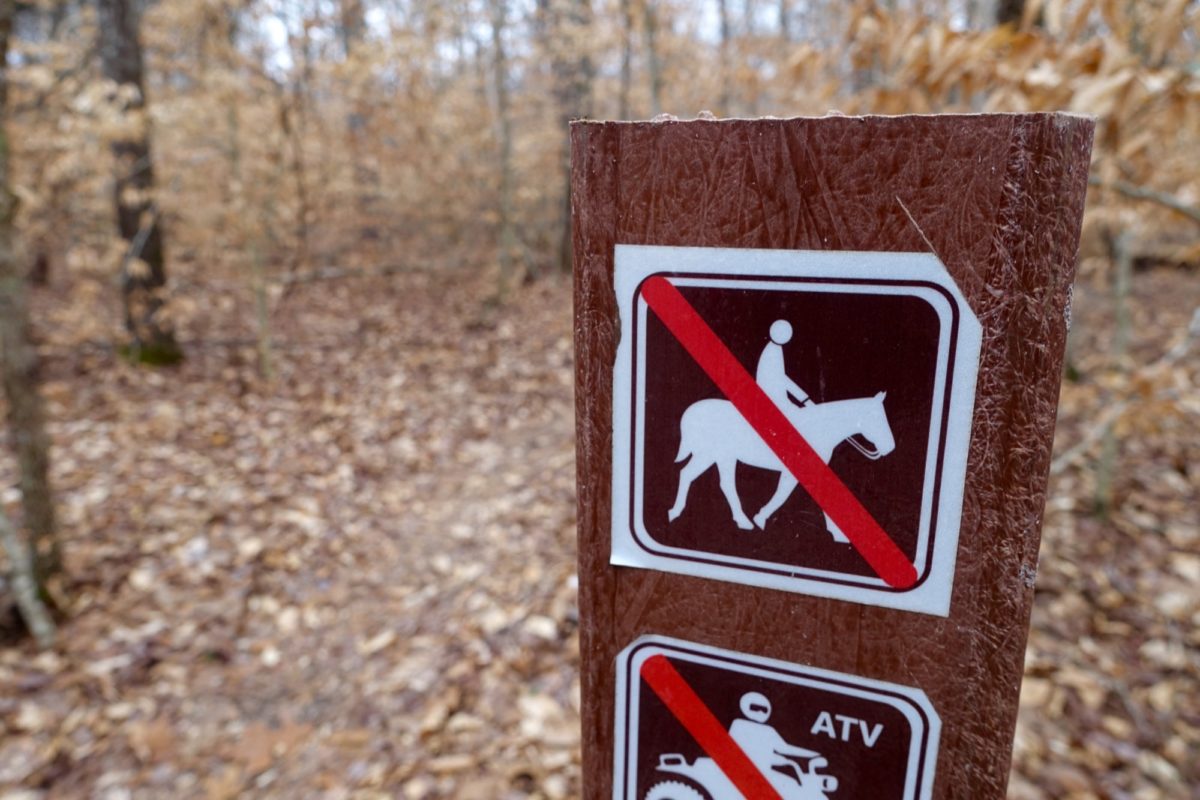 Not only does keeping equestrians off help keep the trails in great condition, but it creates an almost separate-but-equal feeling when contrasted with the nearby Wilderness. Heck, the maps I checked don’t clearly show if there’s even a trail network in the Wilderness next door.

Legend has it that the mountains of Arkansas, from the Ozarks to the Ouachitas, from North to South, and from East to West, are criss-crossed with lines of rough-cut singletrack–much of it forgotten and overgrown, other sections used by hikers and mountain bikers who are in the know and not afraid to challenge themselves, almost all of it utterly unmapped. With the deep canopy of trees towering overhead, the sheer-sided river valleys, and the utter lack of population, anything could be hidden back in these southern mountains–and probably is.

After making our way to the far edge of the trail system, we circled around and began heading back, and on our way back, continued to challenge ourselves with barely-rideable rock-strewn chutes up sharp mountainsides. A delay from a flat tire increased our time in these beautiful woods, and as we finally moved on, our group was noticeably fatigued. A ride that initially had us seeking the gnarliest trails transformed into us seeking the quickest and easiest way back–yet there is no easy way out of this network.

Our final stretch of trail wrapped up with a stiff climb up one ridge, down the backside, with a final grunt back out of the first valley that we dropped into. 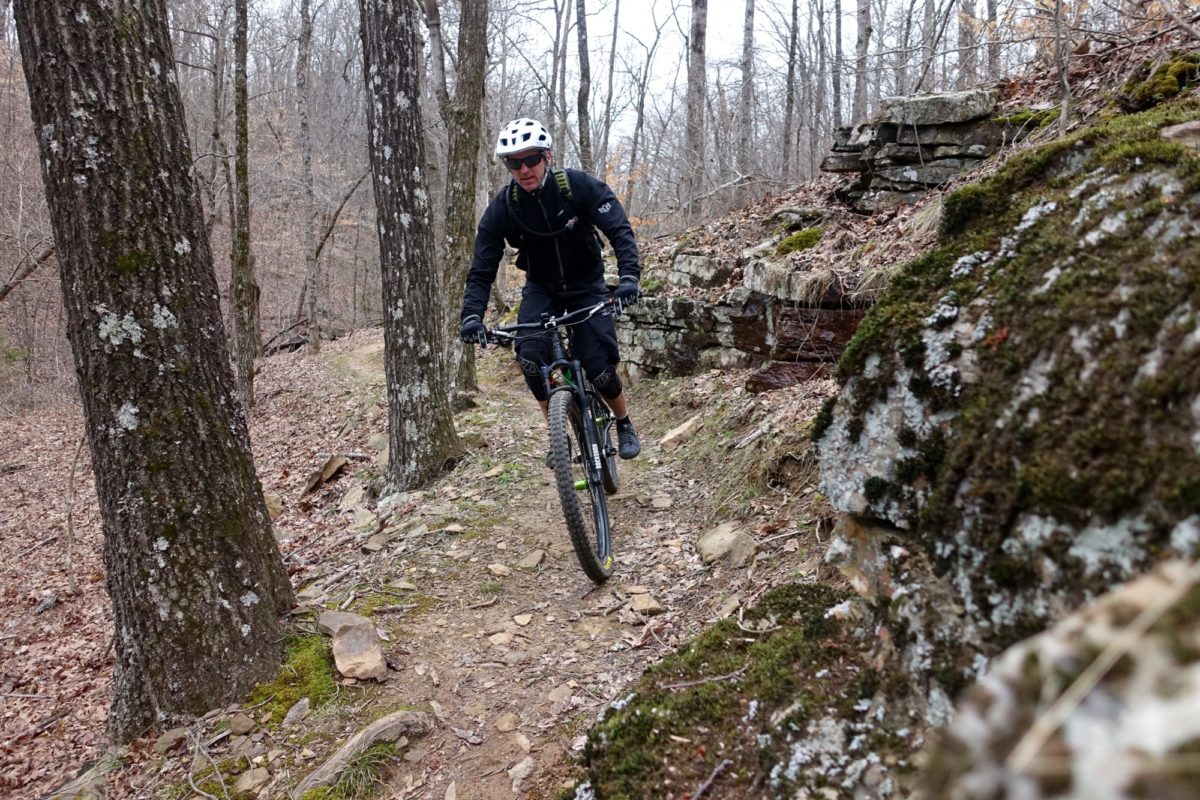 By the time we made it back to the cars, I checked my GPS and was shocked–we had only covered a meager 18.6 miles! Yet as I looked closer, I saw that we’d climbed almost 3,000 vertical feet in those 18 miles–an impressive number for just about anywhere.

The Arkansas backwoods are home to steep-sided mountains, technical trails, and a middle-of-nowhere feel that’s tough to rival. If you choose to journey here, bring your A-game, be prepared, yet plan on having a fantastic time on your mountain bike!

I hit these trails years and years ago before they were “official” and have some great stories about riding through that area on a pink school bus with 10 other mountain bike geeks like me. The locals materialized out of the woods and were really warm, friendly and quite bad ass when it came to riding those trails. They took us to the woodshed that day … a memory of great riding, great trails and great people I’ll cherish forever.

Great story Greg. Thanks for sharing your adventures. I was just driving through that region a little over a month ago. The only problem (in terms of biking) was that I was on a mission and had an old family piano in the truck, delivering it to my middle son who currently lives in OKC. I started the trip in CO, went back to OH to pick up the piano, and then brought it out to OKC. I didn’t bring a bike with me because the weather forecast looked so horrible. Sadly, that was the right choice. It rained and rained and rained. At least I got the piano safe and sound and dry to my son. But as I was driving through western AR on I-40 I was dreaming of all the trails around me — to south (the likes of Womble, Iron Mtn, Lake Ouachita Region) and to the north (Upper Buffalo, Syllamo and Bentonville). SOMEDAY.

I’m guessing that chilly march morning ride in those Ozark hills was much better than any ride in those same hills at this time of year. Way too hot and humid now for my tastes. I actually love riding in the upper 30s to low 50s.

Spot on with the weather! It was chilly when we started, but I ended up peeling a layer later on. In the end, while I should have packed a bit more for preparedness sake, I was perfectly comfortable! Also, I borrowed a pair of knee warmers from a friend, so that helped 🙂

I didn’t spell this out explicitly in any of my articles, but NWA makes a great late fall/winter/early spring riding destination!

The name for this area is quite matter of fact. The streams begin from springs in this area and feed the mighty Buffalo River. The best part about dispersed camping, aside from the cost, is the privacy.Campsites are often wider apart than in a campground.And sites are usually right next to the road.Thank you for guidance.