We love top 10 lists but one list we couldn’t find anywhere: the top 10 most technical mountain bike trails in the world. Admittedly it’s a tough list to compile – unless you’re Hans Rey and have spent a lifetime scoping the sickest lines around the planet. Still, we figured the singletracks database would be a good place to start for a list like this so based on member ratings, input via the forums and Facebook, and good old internet searchin’, here are the 10 gnarliest mountain bike trails we could find. Did we miss a trail? Tell us about it in the comments! 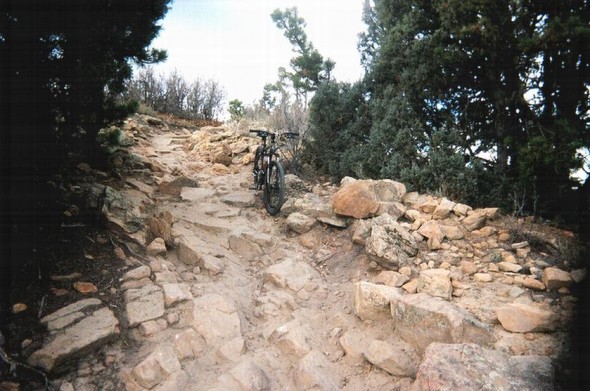 This is one of the first trails that made me wonder: Am I the only one who thinks this trail is totally nuts? Fortunately maddslacker and mtbgreg1 can back me up here – this is an incredibly technical trail! Dakota Ridge teeters on a rocky spine overlooking Denver to the east and Red Rocks and the front range to the west and features chunky, off camber rocks with shear drops on either side of the trail. Still, it’s one of those classic Denver rides everyone has to ride (or walk!) at least once. 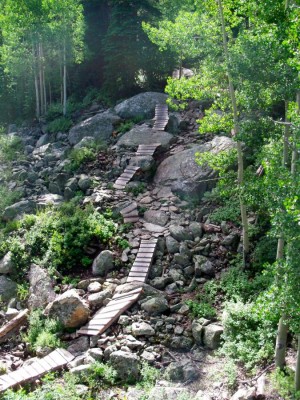 With a name like Psycho Rocks, you don’t really need black diamond markers. Just looking at the photos, Psycho Rocks is rocky, steep, and slippery when wet. Photo left: mtbgreg1.

Pick nearly any lift-serviced DH mountain biking destination and you’re sure to find black diamond and double black diamond rated runs so consider this pick a nod to all those killer bike park runs too. Trails like Frankenstein at Seven Springs in Pennsylvania (element22’s pick) and La 1837 at Mont St. Anne in Quebec, Canada are some of the toughest, yet most accessible, trails around. Head to a resort and see what you’re made of!

Pisgah is known to riders up and down the east coast of the US for some of the most rugged (and beautiful) trails around. In fact, Bike Magazine chose Pisgah as this year’s proving ground to punish rigs in their 2012 model year tests. Pisgah is littered with steep descents, webs of roots as thick as your thighs, and crumbling rocks hidden beneath slippery, decaying leaves. Want to find the gnarliest stuff? Look up Farlow Gap, Black Mountain, and Pilot Rock – just don’t say we didn’t warn ya.

Home to the Mega Avalanche, the world’s largest DH race, Alp d’Huez features over 8,000 vertical feet of shredding spread over 80 miles of dedicated DH mountain bike lines. The Mgavalanche itself is a 20-mile DH run that punishes riders with year-round snow, ice, and rocks not to mention wooden freeride structures. If you’ve ever ridden on snow or ice, you know that alone takes even the easiest trails from mild to wild in an instant! 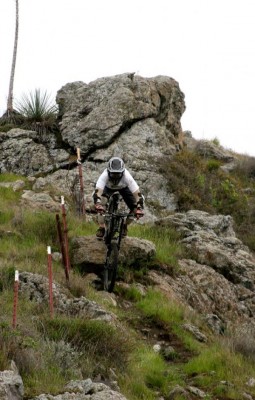 We haven’t seen any reviews of this trail since 2009 so maybe it doesn’t exist anymore – if not, RIP Tower Trail. As if the steep slopes and ginormous boulders weren’t enough, the trail is hemmed in with barbed wire on one side!(photo left: downhillnews) You may recognize this trail from the photo in rotation on the singletracks homepage; man, just looking at this drop makes my stomach churn.

Easily the most well known collection of mountain bike trails in the US, Moab features desert rock riding like nowhere else on the planet. Even trails with a mild reputation like Slickrock feature surprisingly steep descents and shocking exposure. But for the truly brave (or insane!), take a look at the Portal Trail where there’s a sign that demands riders dismount or risk certain death. If you’d rather try staying on your bike, Flat Pass and even Porcupine Rim will challenge even the most skilled mountain bikers.

Whistler is essentially synonymous with technical mountain biking thanks to its steep slopes, creative structures, and mossy, thick vegetation. Trails like Garbonzo and countless other unnamed trails in the area are legendary for their rocks, roots, trees, and “north shore” style trail furniture. Whistler is the best place to ride miles of challenging tech for days on end – that is, if you’ve got the stones. 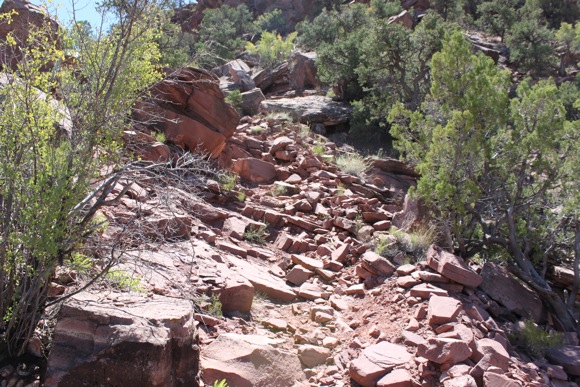 I’m not sure how (or if) this is even an official mountain bike trail but I walked it last summer during my ride from Durango to Moab. Catch ‘Em Up is really a cow trail shortcut ranchers use to drive cattle from the Paradox Valley to higher elevation grazing areas. Yet each summer, countless mountain bikers like those in our group attempt to ride down 3/4 of a mile and about 1,000 vertical feet to the roadway below. It was hard for any of us to imagine someone riding down this trail without walking – a lot – but then again, there must be someone who could do it!

This one just sounds sick – don’t blow up at the Gas Plant! Taipei is notoriously hilly and covered with thick vegetation so when we read that Gas Plant features Taipei’s most technical climbs and descents, we were sold. Here are a couple tidbits from the Formosan Fat Tire Association website description: “starts off with 2 short carries over un-rideable rocks” and “(not) the safest place to ride, yet amazingly there has been only one serious injury here that we are aware of.” Oh, good, only one serious injury! Plus, at the end of the run you’ll also find “the slipperiest stairs in Taipei.” 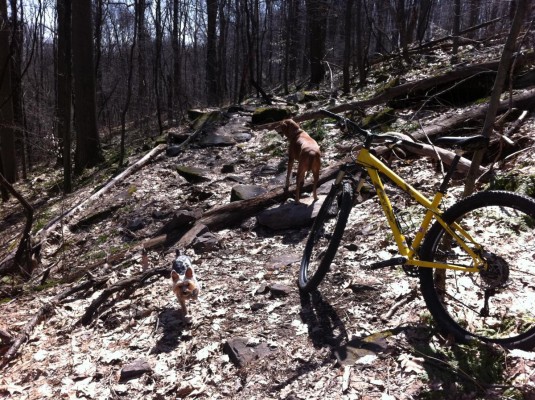 Fact: a moraine is an accumulation of unconsolidated glacial debris like rock and dirt. Judging by pics of Moraine State Park like the one above, this place was also hit by a hurricane shortly thereafter! Singletracks reviewer jneuff says “This is definitely a trail to seek out if you enjoy technical, very technical, singletrack,” and other reviewers agree it’s the most technical, difficult trail they’ve ridden. Enough said.

Know of a trail that makes any one of these look like a road ride? Tell us about it in the comments!

The Snake Creek section of the Pinhoti has to be somewhere near this list.

Yep, I was tempted to mention that one – just barely missed the cut. 🙂

Yeah, I get why it doesn’t make the list. There is a 5+ mile long rock garden, but it doesn’t really have any steep sections.

Cause sometimes we just love a good challenge!
That top one looks intriguing, have also read about the one in Taiwan. Though my travels Ive found that some of the more technical trails are new ones that havent been ‘worked’ yet, re-routed, armored, etc. I have happened across some absolutely nasty/fun trails wandering around the west, a lot of them lacking even names yet. As far as existing trails the Mormon trail in the South Mtn Park in Phoenix is one mother of a climb with some decending route that’s pretty insane. In Tucson you can go find what the locals call the ‘Upper 50’ that will get your adrenalin boiling also – fun stuff! If your in Vegas swing by Blue Diamond bike shop and ask Lori to point you towards ‘The Hurl’.

+1 for Pisgah. Goldengoose and I did a bikepacking trip there this past summer. It was fun but super technical!

Definitely glad Dakota Ridge and Psycho Rocks made the cut!

I have ridden Dakota and most trails in Moab. I also think Santos deserves honorary mention. OMBA has smoothed things out over the past year, but you still need a LOT of practice to ride it w/o getting off the bike.

schooner trace trail in brown county ind. could be top ten or close. was told once before i rode the trail “only if you have a death wish” they were right!!

Kind of surprised nothing on Vancouver’s North Shore or Squamish made the list. I’ve yet to encounter anything in the US that is that technical.

Although I will admit I’ve not ridden any on your top 10 list other than all of Moab and Whistler. Nothing in Moab comes close to the Shore. Portal is just exposed but not technical at all. Gold Bar Rim Blue Dot is actually scarier but again not technical just crazy exposure.

Garbonzo is a chair not a trail but the many trails it serves accesses some pretty technical riding.

Try Sex Boy, Sex Girl, Shore Play or Reaper on Cypress or go to Fromme for some easier but super fun rides…Oil Can, Expresso, Pink Starfish, or Seymour CBC Lola Cambodia Boogie Man. The list is endless and I gotta believe at least one would make you list

“Yeah, I get why it doesn’t make the list. There is a 5+ mile long rock garden, but it doesn’t really have any steep sections”

Gotta say I disagree with this rationale. A level or uphill technical trail will be more challenging than a downhill trail with similar sized obstacles. Without the aid of gravity and the momentum that comes with it, line selection and maneuver become far more important. Furthermore, the additional effort required to navigate technical courses uphill puts a real premium on conservaiton of energy, which means moves must be executed efficiently rather than just bulling over or through them.

Bottom line, with similar “technical-ness” an uphill trail will be far more challenging than a downhill one, and not just aerobically.

@MarkP@telus, you make some great points. I think one of the issues is that most of us here on Singletracks are US riders, and haven’t been blessed enough to experience “the shore.” As a result, the British Columbia portion of our database is woefully lacking. If you live and ride there, please help remedy the situation by adding trails & photos to the database!! We’d love to see where you live and ride!

I like to have a few obsticles to ride over on my trails but that just looks like too much to me. I like to ride at a smooth and fast pace. With all that junk on the trail just sems like it would take all the fun out of it ???? It would be different if it were sections of the trail that had brief technical parts to conquer. Now I like that. But an entire trail like that ? Just not my cup of tea