On day 20 of my 29 Trail challenge I struck out early with 3 trails on my to-do list. Destination: east-central Alabama and the Talladega National Forest. 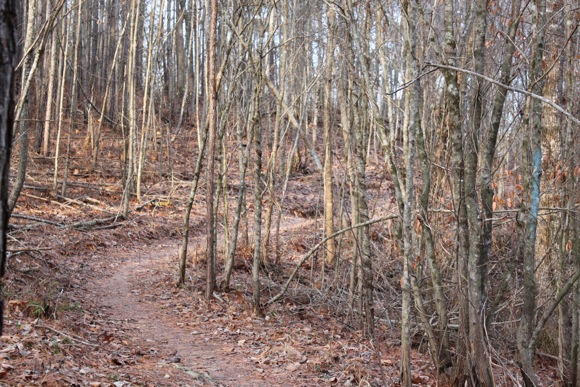 The Sylaward trails are located near Sylacauga, AL along the shores of Lake Howard. The forecast for the day put the high in the low to mid fifties but when I arrived the thermometer in my car read 27 degrees and there was a glaze of frost on the grass. I quickly threw on a pair of tights under my shorts and jumped on the trail at 7:30am (I had gained an hour since Alabama is in the Central time zone). There was an eerie fog laying low on the glassy surface of the lake and it seemed like I was the only person for miles around.

I was a little worried the trails might be sloppy due to the hard rains on Tuesday but with temperatures well below freezing, the mud was temporarily transformed into hardpack. The Sylaward trails feature some of the buffest singletrack I’ve ever ridden and it would have been a shame to damage them in any way. 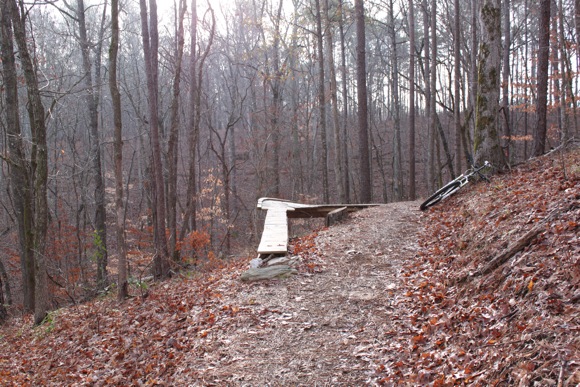 Because the trails are so smooth and the elevation changes slight, I was able to average about 10mph despite stopping to take pics and make adjustments to my bike. On the way back the temperatures were rising and the previously frozen trails were starting to thaw a bit, especially the short, muddy access road across the upper dam. Back at the car I had clocked about 15 miles by 9am. Great start! 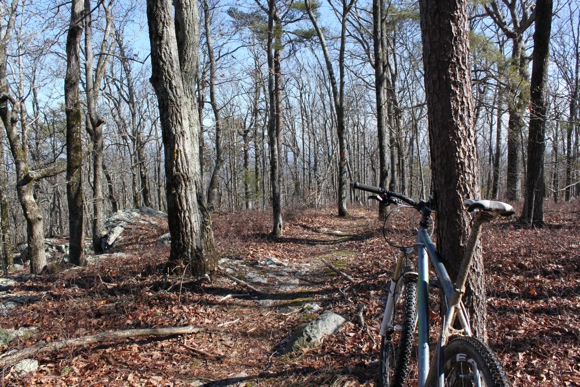 The highest point in Alabama, Cheaha State Park features about 6 miles of mountain bike trails along the top of the ridge. There’s a $2 per person entry fee but it’s well worth it to access the great (winter) views and challenging, rocky singletrack.

After riding Sylaward I was expecting more buff, smooth singletrack but instead I found rocky, rooty singletrack with a distinct mountain feel. Even though there are only 6 miles of trail, I got a great workout for the rock gardens in upcoming Snake Creek Gap TT #2. 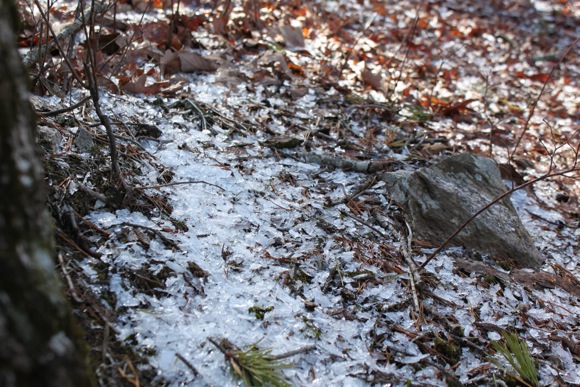 I parked at the top of the Mountain Express trail despite the fact that I usually prefer to park low and ride high. The descent to the main gate is fast and rocky and there seemed to be several side trails leading to the paved road on the right. I stopped in a spot where ice crystals on the ground looked like someone had smashed a car windshield and guessed the ice had fallen from tree limbs in the wind. 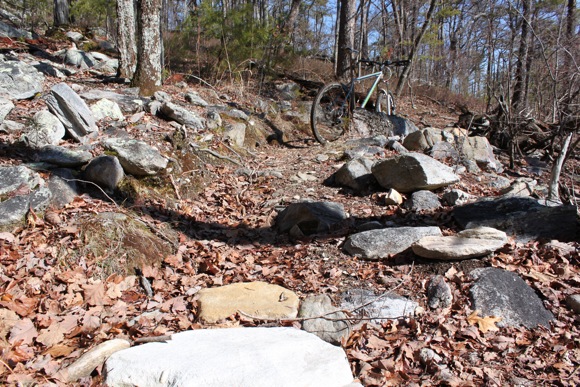 The climb back up wasn’t as bad as I had imagined but the rocks certainly made things difficult. The Upper and Lower Spring loops featured rhododendron tunnels and fast descents and I doubled back a couple times to make sure I hit everything. Two trails done before lunchtime. 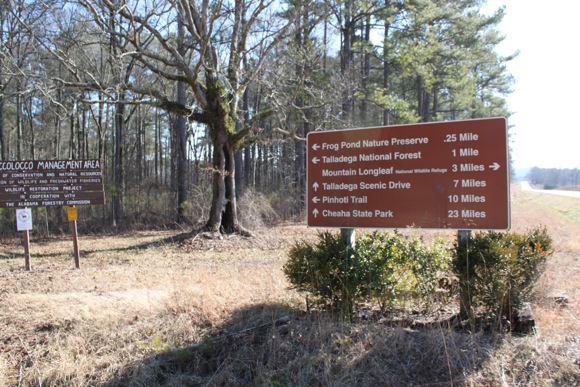 Just north of Anniston Alabama and only a few miles from I-20, the Choccolocco Management Area features some great singletrack including Iron Legs and Mark’s Loop. Last year there was talk about Anniston working to become a MTB mecca and based on what I found in Choccolocco and Cheaha there’s definitely a case to be made here (especially if/when the Coldwater Mountain project takes off). 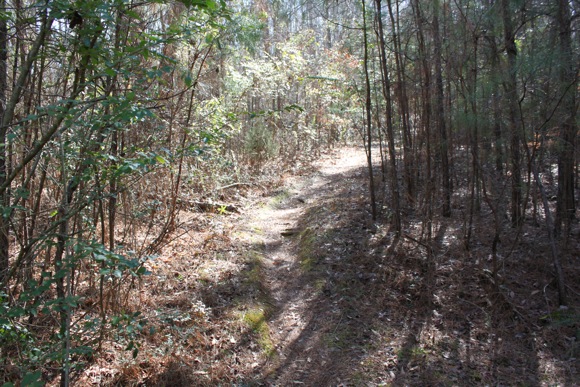 I had intended to ride a trail called Gene’s Loop in Choccolocco but after searching around and riding down some muddy ATV trails I stumbled upon a singletrack trail labeled “Mark’s Loop.” The trail started off pretty easy – fast and mostly flat – but as it wound its way up the mountain things got more challenging. I even came across what appeared to be freshly cut singletrack with blue survey tape flapping in the wind and was happy to do my part to break things in. 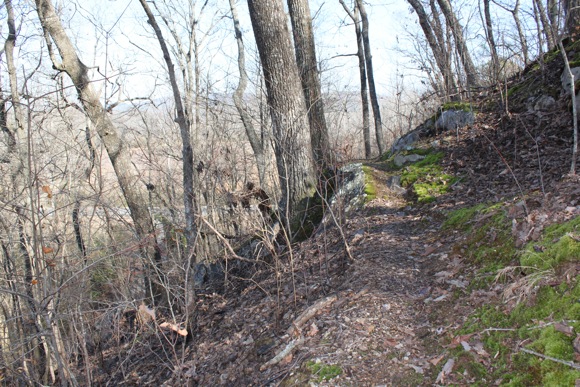 After riding about 6 miles I headed back to the car but I was really bothered that I couldn’t find Gene’s loop despite having a detailed topo map with me showing the trail. I cruised up and down the gravel road, snooped around a few gated doubletrack trails, and sniffed out a couple singletrack trails but they all seemed to disappear quickly. I finally decided to call it a day but I know I’ll be back again to ride more trails in Choccolocco!

Yesterday I broke the halfway mark in my quest – 15 trails – and with great weather in the forecast for the next several days I plan some major catching up. Today I’ll be hitting trails to the east of Atlanta – The GA International Horse Park (site of the 1996 Olympic MTB competition), Heritage Park, and Tuner Lake. By Monday afternoon I should be all caught up and ready to taper for my big finale at the Snake Creek Gap TT #2!

Next week I’ll post updates on how my gear has been holding up and how my training is going so far. Stay tuned.

Wow, Alabama represent! The trails in those photos all look incredible! I especially love the narrow benchcut trail in the last photo. Awesome singletrack!

The Snake #2 is just over a week away…I’m really looking forward to it, even tho I haven’t been able to ride a lot since the last one. Hoping for good weather!

Excellent. Would not have considered Alabama as a bike destination. Ill plan to stop off next time I pass through…

Good article. You should try the Swayback Bridge Trail in Wetumpka. Similiar to Oak Mountain but without the rocks and more narrow, it’s an outstanding trail with 11.2 mi. of fast flowy singletrack overlooking Lake Jordan.

nice write up. those appear to be muy tasty trails.
i like trails I can average 10+ on. There only seem to be 2 or 3 like that in Texas. Most I’m 7 or 8 something.

I’m confused…the Coldwater Mountain took off in May and it is awesome! It is the best singletrack in Alabama. Alabama has a long way to go to take advantage of that awesome terrain in the north, though. Roll Tide!!