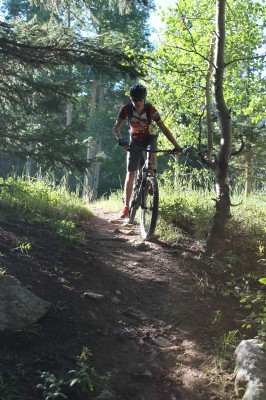 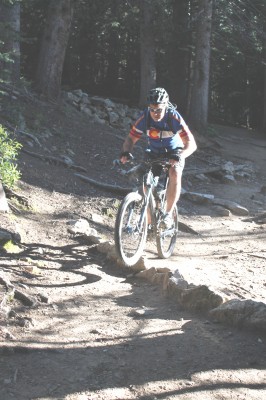 Work frequently takes me from my home in Colorado Springs to Albuquerque, New Mexico. Fortunately, the trip is done as easily by driving as by flying, which means I can generally bring a bike. Not only can I get in a ride in the Albuquerque foothills after work each evening, I can generally take a short detour along the way and hit a nice ride around Santa Fe. Despite all these trips, however, a couple bucket list trails have eluded me. That’s because they require a shuttle, something I can’t generally arrange on a weekday when passing through. So, Miniskibum and I concocted a plan to remedy that this past Labor Day Weekend: spend this weekend in Santa Fe with my wife—she could shuttle us in the morning, we do our ride while she plays tourist, and we all spend the evening together. Sounds like a win-win scenario to me. 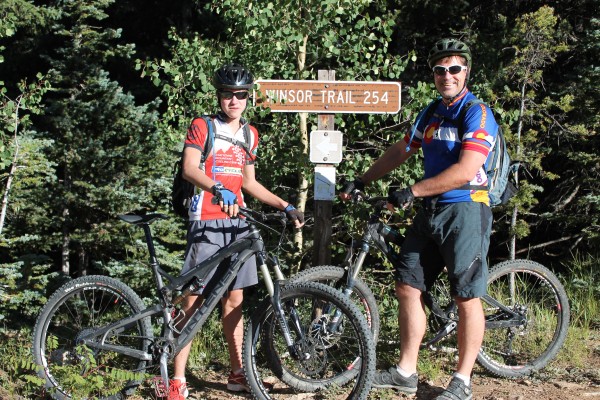 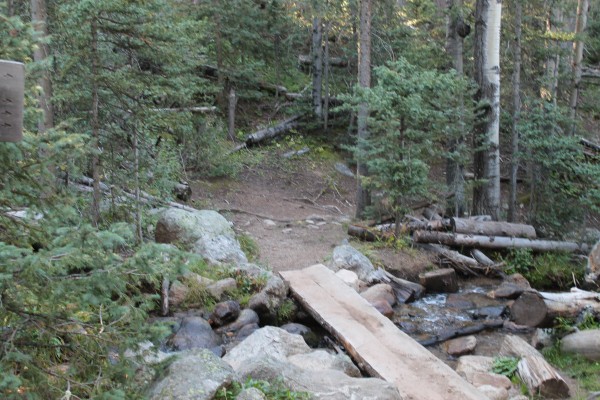 The Winsor bike route can be easily divided into three distinct zones with an optional preamble, each having its own character, but all combining to form a complete and yet wonderfully-varied ride. The optional preamble is the 1.1-mile stretch between the base of the ski area and the point where the Winsor Trail intersects the highway, which also happens to be the entrance to the Norski trailhead (an access point for a small cross-country skiing loop which circumnavigates the adjacent knob).

There are two things which become apparent in this stretch. First is the dense, dark, and cool forest which stands in stark contrast to the high desert and scrubby pinion forests which surround Santa Fe–so close if measured in a straight line, but 3,000 feet below and worlds away in character. The second is that, by starting at this point rather than at the Norski trailhead, there’s some tough little climbs interspersed with the descending. If you’re okay using your pedals more than your brakes for a while, start at the base of the downhill ski area, but if you’re looking for a pure downhill romp, opt for the Norski trailhead. 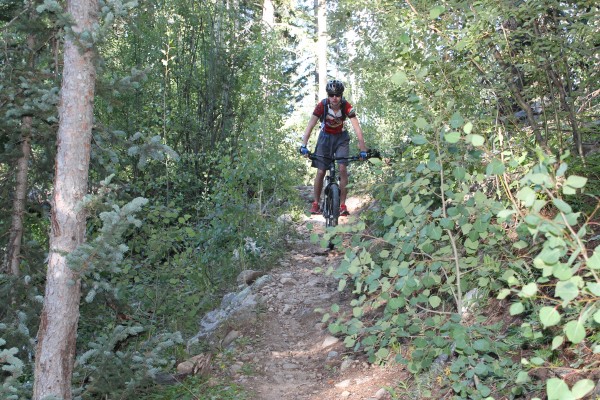 The uppermost section after the Norski trailhead was, in my opinion, the best the trail had to offer, although all of it was exceptional. For Miniskibum and I, though, the upper section was prime because it was the gnarliest. Like the rest of the trail, it dropped altitude quickly, but in this case a little more quickly, and all the while throwing roots, rocks, and the most delightful turns at the rider. Nothing here is death-defying, but it all commands the rider’s attention, especially if ridden at the speed the trail invites. Upon bursting out onto Forest Road 102, we briefly paused before picking up the trail on the other side and Miniskibum said, a bit prematurely, that this may be his new favorite trail. Despite the early nature of the statement, I could certainly see his point. 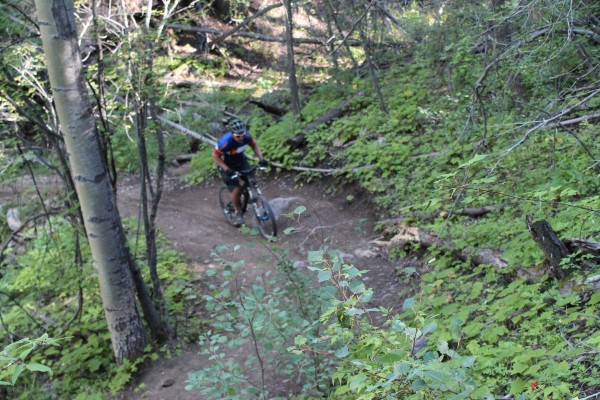 After crossing FR 102, there’s a bit more of this mildly-gnarly but highly-entertaining singletrack before the trail widens, often to doubletrack width. The joy of this section lies in the angle of the trail: it’s just steep enough that you can really fly without having to work at it, but not so steep that you have to cramp your hands riding the brakes. This section is also more easily ridden uphill, and those not wishing to shuttle will out-and-back this section. Alternatively, one could make a more moderate loop out of it by taking the Chamisa and Borrego trails, each of which connects with the Winsor Trail at one end and paved road at the other end. 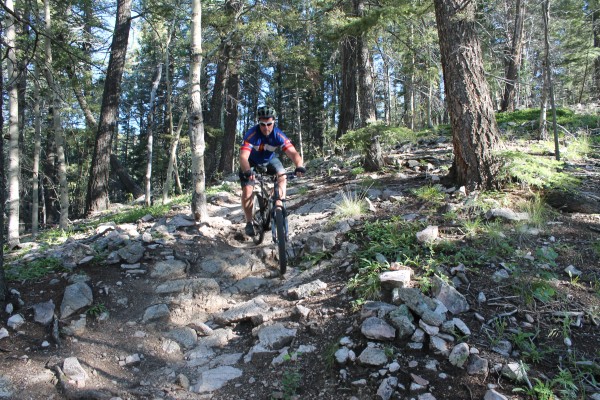 Although still dropping altitude rapidly, the bottom section demands a speed reduction as the trail gets narrow again and suddenly very twisty. In addition, this section throws a lot of creek crossings at you, most of which will get your feet wet. This is actually quite welcome as, by this time, it’s both later in the day than when you started and you’ve bled off much of the altitude you started with, having long since departed the cool alpine in which you began and replaced it with the much warmer edge-of-desert pinion and juniper forest. 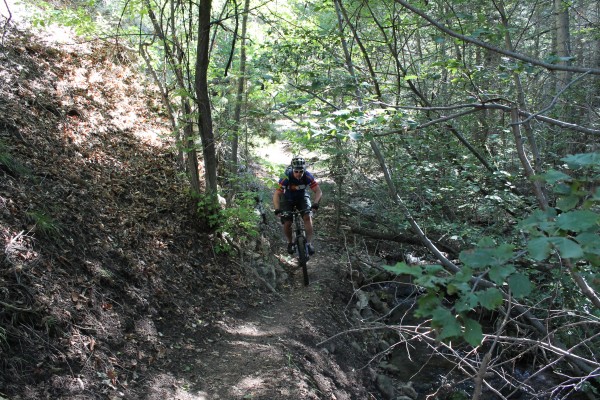 The trail finally emerges on the edge of the village of Teseque, a few miles north of Santa Fe. This is a good place to leave your shuttle vehicle. In our case, knowing the lower end of the trail was a little hard to find, and not wanting to impose on Mom to wait for us we simply chose to ride that last five miles to our lodging in Santa Fe. Unfortunately, while the Winsor Trail was easy to navigate, the streets of Teseque were not, and tacked on a few miles of downhill pavement before we realized our error. Consequently, we ended up with a good 12 miles of pavement, including one major climb on blacktop on a busy highway in the midday sun before we could complete the journey; this was, no doubt, the negative karma we earned from being shuttle monkeys in the first place! 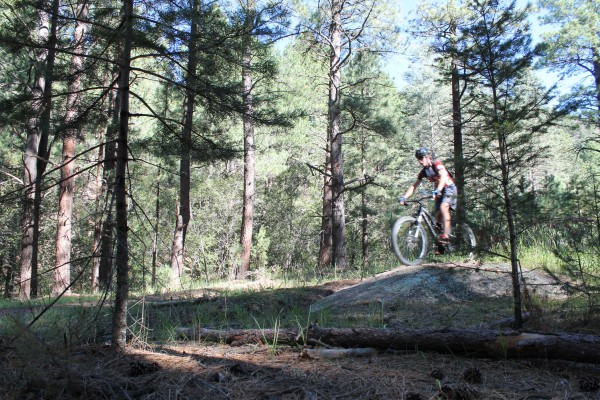 Upon arrival at our “casita,” and upon telling my wife what an exceptional ride we’d had, she offered to shuttle us up for another run! Had we not done the big pavement detour, I may have taken her up on that offer—just think how much fun the ride would be now that we knew the lay of the land! But I also knew I didn’t want to do another blacktop shuffle and I certainly didn’t want her aimlessly wandering the streets of Teseque wondering just where we might emerge. So I instead accompanied her to the art fair in the Santa Fe Plaza. Like I said in the beginning—this day would definitely be a win-win affair! 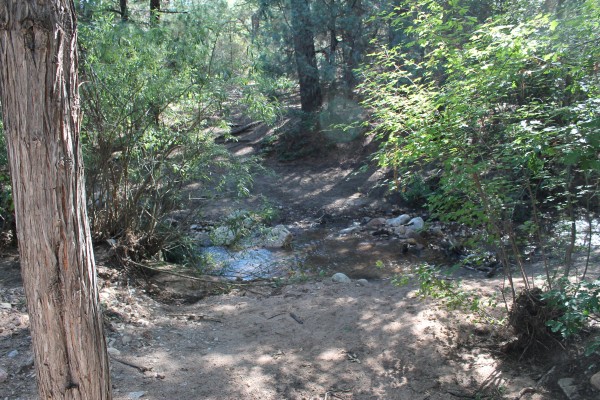 I’ve done this once as a shuttle as well, and despite a pretty nasty fall or two, I remember it as being one of my favorite trails in NM. I would LOVE to do it again

Man, this sounds like a fantastic ride! Definitely adding it to my wishlist 🙂

Glad you guys had a blast! One pointer for next time would be to have your wife meet you at the Teseque Village Market, for a couple reasons. The first is that it is really easy to get to from Santa Fe. You basically can’t get lost. The road starts as Washington Ave at the main square in Santa Fe and turns into Bishops Lodge Rd as you head north out of town. Bishops Lodge Rd dead ends into Teseque Village Rd and the Village Market (restaurant) is at that intersection.

Secondly, once you finish the Windsor Trail you get put out on Bishops Lodge Rd. If you just take a right the Market is only a half mile away and it is all downhill.

Lastly, the Teseque Village Market has amazingly good food. I have lived in ABQ for almost 3 years now, and it is one of my favorite places to eat. My friends and I usually park one vehicle at the Market that way we can have lunch/breakfast there when we finish.

Another good shuttle that starts at the Ski Area parking lot is ‘Rio en Medio’, commonly referred to as REM. It has basically no people on it and is a little more technically demanding.

If anyone comes this way I would be happy to show them around.

Would love to do the REM! Sounds like my kinda’ trail.

So what was Miniskibum’s final assessment? I always enjoy hearing his rating of a trail, and in this case I was anticipating his final assessment since he was of such high opinion of it on top. Please rate minus the blacktop detour. =)