One of the major destinations on my road trip this past summer was the SoCal area. California in general is pretty famous in the mountain biking world, with Marin County the acclaimed birthplace of the sport. Also, many major bike companies, gear companies, websites, and magazines call California home, and they are mostly split between the Bay Area and SoCal.

The first time I flew out of the Los Angeles airport I was amazed at how close the mountains are to the actual city. While La Canada, Altadena, and Pasadena are technically suburbs, the city butts up against the very base of the mountains and sprawls from there all the way to the ocean.

The Singletracks trail database is remarkably thin in the SoCal area, and we knew that there were a ton of trails in the area that we didn’t have listed yet. After doing extensive research utilizing guidebooks, maps, and other websites (which are not nearly as user-friendly as Singletracks), I determined that there must be some awesome trails in the Angeles National Forest.

Based on the SoCal guidebook published by Falcon Guides, I decided to try Mount Wilson as one of my first trails in the area. Dropping 5,000 vertical feet in 8 miles, this trail is so steep that really the only reasonably choice is to shuttle it. On our drive up to the top of Mount Wilson, we passed a bunch of riders unloading from a shuttle van at a different trailhead. After stopping to talk to them, they all recommended the trail they were going to ride, Mount Lowe, as one of the best trails in the region. Mount Lowe was already on my radar, so I just decided to continue with my plans for Mount Wilson and to hit up Lowe the next day.

Mount Wilson really isn’t a great trail for mountain biking. The tread was very steep, narrow, technical, and overgrown up high, and at points it was unrideable due to poor trail construction or corners that had been completely washed away like the one pictured below. 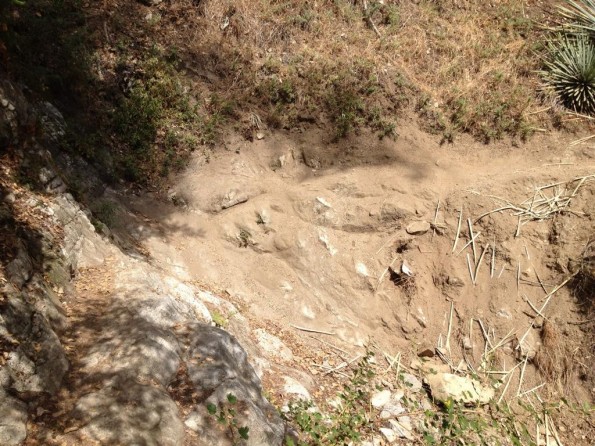 Other sections were wonderful and an absolute joy to ride. 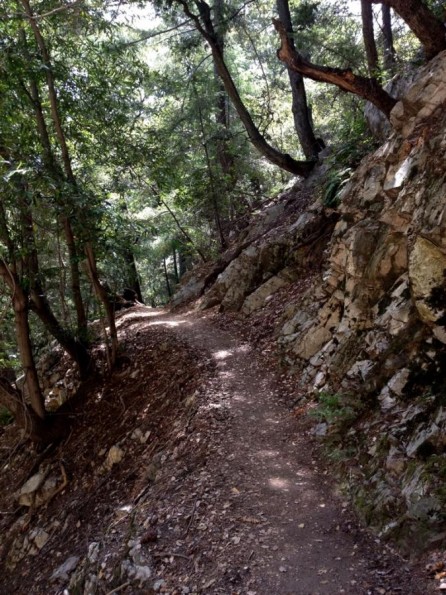 I believe that this trail is primarily a hiking trail, and I’m not sure whether or not it is actually bike legal, despite the fact it was in the 10-year-old guidebook. I made the unfortunate mistake of riding this trail on the 4th of July when the trail was packed with hikers, especially as I neared the bottom. Due to its proximity to Los Angeles, Angeles National Forest is the busiest National Forest in the nation, and I could tell by my painfully slow descent down Mount Wilson due to the number of times I had to pull over.

While in the end I was glad to have ridden Mount Wilson, if you are looking for a true SoCal shuttle run, I suggest you check out Mount Lowe.

The Mount Lowe Railway is a historic railroad grade that used to transport people up the mountains to several different hotels and resorts that were located high up in the San Gabriels. Today the train tracks are long gone, but you can still ride through an old tunnel, see old bridges, and even view the ruins of some of the hotels. 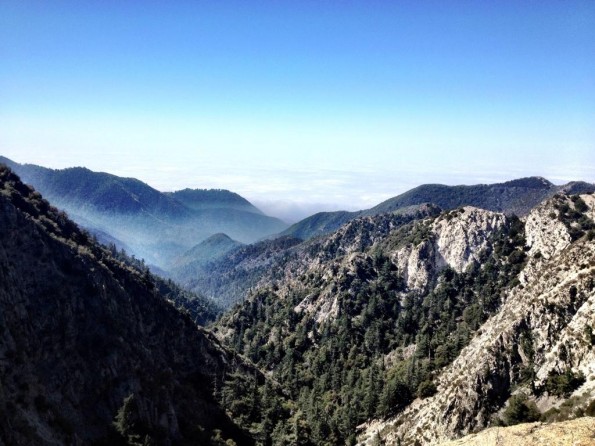 Unlike Mount Wilson, the Mount Lowe area provides numerous routes from the top of the mountain to the bottom. The most obvious is to follow the railway all the way down, but how much fun is that? To make things more interesting and more challenging, after descending a few miles on the doubletrack you should be able to pick up the singletrack trail. 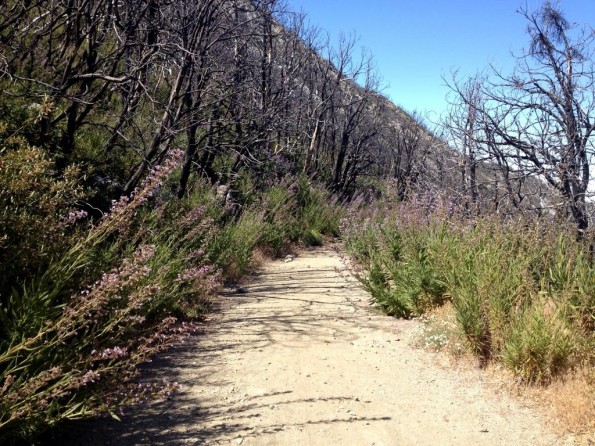 But before you get to the singletrack, you have to run the gauntlet. The upper portion of Mount Lowe, and many of the other trails in the Angeles National Forest above 3,000 feet, are lined with these beautiful purple flowers known colloquially as the Poodle Dog bush. While you might be tempted to pick a few and make a bouquet for your girlfriend, don’t: Poodle Dog is like poison ivy or poison oak on crack. The pretty purple flowers disguise a plant that is so poisonous and nasty that one rider I talked to who crashed into a poodle dog bush had to be hospitalized.

Poodle Dog only comes up after a fire and only grows above 3,000 feet in Southern California and Baja California. Since this area of Angeles National Forest burned a few years ago, it provided the perfect conditions for Poodle Dog to thrive. Thankfully, we had been warned about this assasin-in-disguise by a local shop before hitting the trails, so we knew to stay well away. 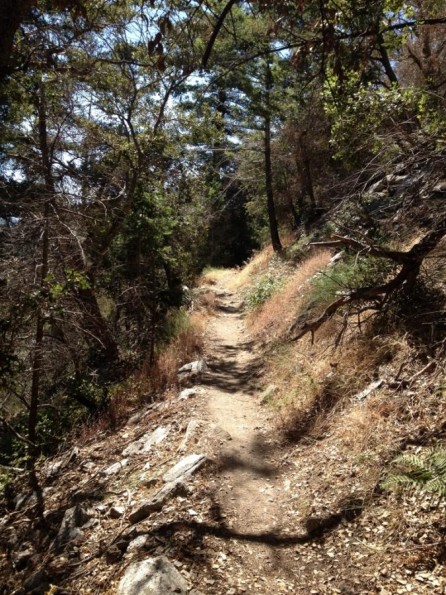 After running the gauntlet and picking up the first singletrack trail, you need to watch the turns and trail signs closely as there are numerous options. The main singletrack route, which I’ve detailed in the description on the main trail page, starts on one side of the railroad, and crosses it at least once or twice with numerous trails branching off. Be sure to bring a map, because if you take a wrong turn you can easily find yourself dropping out in an entirely different area of the city.

Instead of thinking of Mount Lowe as one singular shuttle run, it’s better to think of it as a trail network. While I didn’t ride all of the options, there are plenty of great trails and routes to explore in this area! 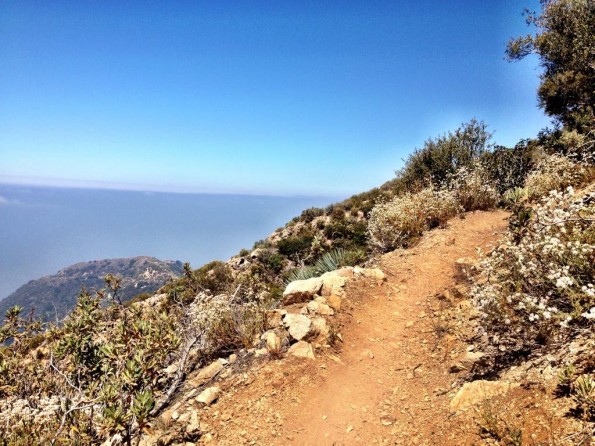 The singletrack that I did get to ride was night-and-day different from Mount Wilson! I could definitely tell that mountain bikers use and maintain these trails. The singletrack was extremely varied, and included some tech sections, some flowing sections, and some exposed sections… but it was all great!

The day before, most of the people unloading their bikes off the shuttle were grabbing massive dual-crown DH bikes or long-travel freeride bikes, so when I hit this trail I grabbed my full face helmet just to be safe. I was a little worried that I’d be under-gunned as I was only riding a 5.5″ trail bike. But as I was loading my bike back into the truck after the ride, I tried to think of a single place where I was uncomfortable on my rig–and I couldn’t. With about 700 feet of climbing mixed into the route, in retrospect I almost wish I had just run my regular XC lid.

After descending the main Mount Lowe singletrack to the trailhead, I still had about a thousand or so vertical feet of descending on pavement to where I was planning to meet up with my wife. However, right before I reached the trailhead, I saw a mountain biker off to the side of the trail near a chain link fence chatting with another guy and then he disappeared out of sight. I rolled on up to see an unmarked singletrack dropping down the mountain. After checking the map on my phone to verify that it was going roughly the right direction, I dropped into the singletrack and kept on descending!

After following a network of various singletrack trails, some of which appeared to be predominantly horse trails, lo and behold! I popped out at exactly the same park where I was planning on meeting my wife! Instead of a thousand vertical feet of boring pavement I was pleasantly surprised with a full-dirt descent!

Usually after a long, hard ride, the first thing I want to do is eat. This Mount Lowe route conveniently drops right out into the outskirts of Altadena, and only a couple of short blocks away is this amazing restaurant: Fair Oaks Burger. 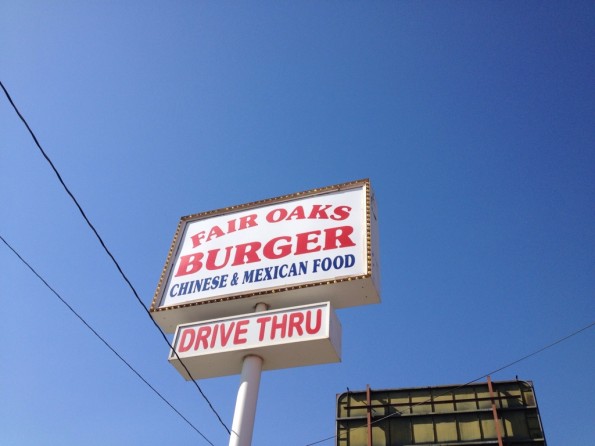 Just look at that sign: burgers, Chinese, and Mexican… all under one roof! What more could you ask for in life? To top it off, the food is delicious, and not very expensive. Total win in my book! The only downside? You’ll have to go somewhere else for a post-ride beer.

Your Turn: Have you ever ridden in So Cal? If so, what was/is your favorite trail?

The first picture is great!

I can only dream!!
Sounds like a great time Greg.

Profoundly sweet! Thanks for the trail review. I shall try it next weekend.

Awesome, glad you enjoyed the post man! Have fun on the trails!!

mt. wilson/darkside and mt. lowe/frontside are definitely the trails to hit. if you want to shuttle up go to http://www.shuttle-run.com . take you to either trail. just remember that mt. wilson will drop you out at santa anita. whereas, mt. lowe drops you out at JPL parking lot in Altadena.

great post! good thorough overview of the trails. check out Where to Bike Los Angeles MTB for super detailed info on local trails!
one off our members told me about your post. come out on the shuttle (www.shuttle-run.com).

Thanks, glad you guys enjoyed it!