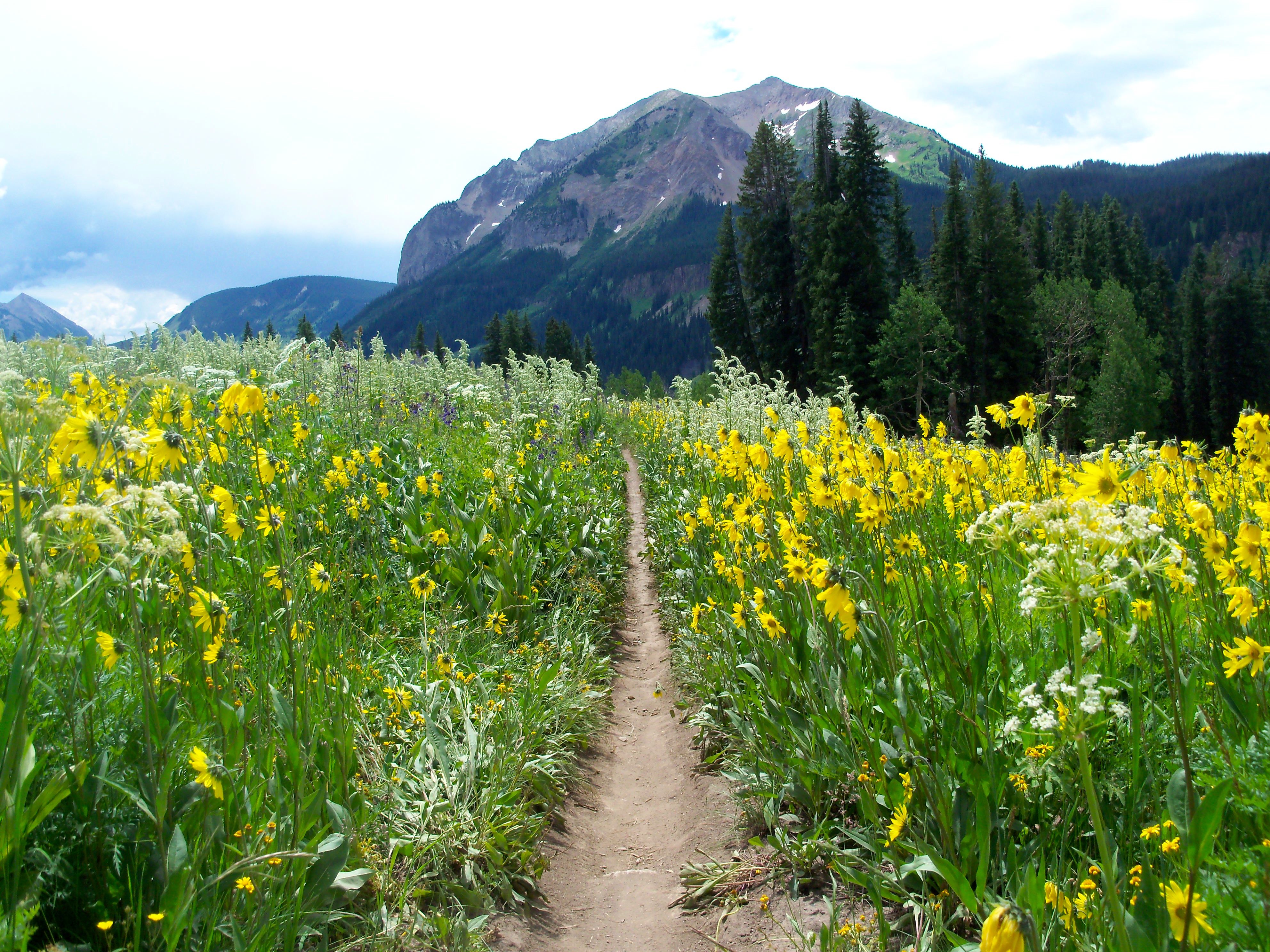 Trail 401 is one of the most renowned mountain bike trails in the nation and for good reason: it has all of the qualities that you could ever want in a classic singletrack ride:

I’ve been nervous about writing this ride report – how does one actually go about accurately describing one of the best trails in the nation in mere words? All of the standard metaphors, many of which now seem to border on the cliche, just don’t measure up to the grandeur of 401.

So instead of employing 5,000 words to describe this slender line of dirt, I’ll try to let the photographs do most of the talking.

We began our ride as most people do with the long climb up Gothic Road. 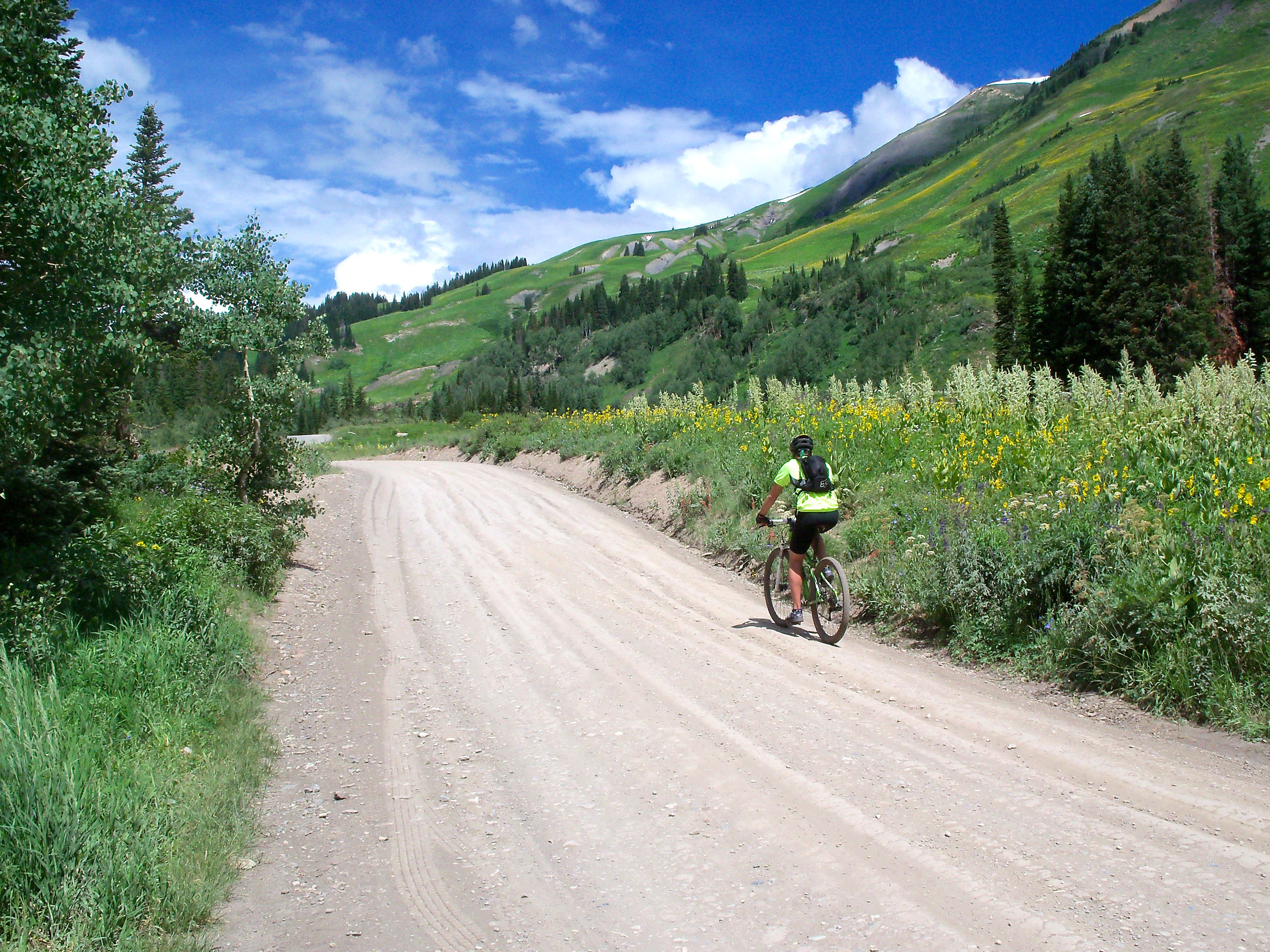 Despite the fact that we were slowly grinding up mile after mile of steep gravel roads, I was thoroughly enjoying myself because of the incredible views of the mountains all around us! 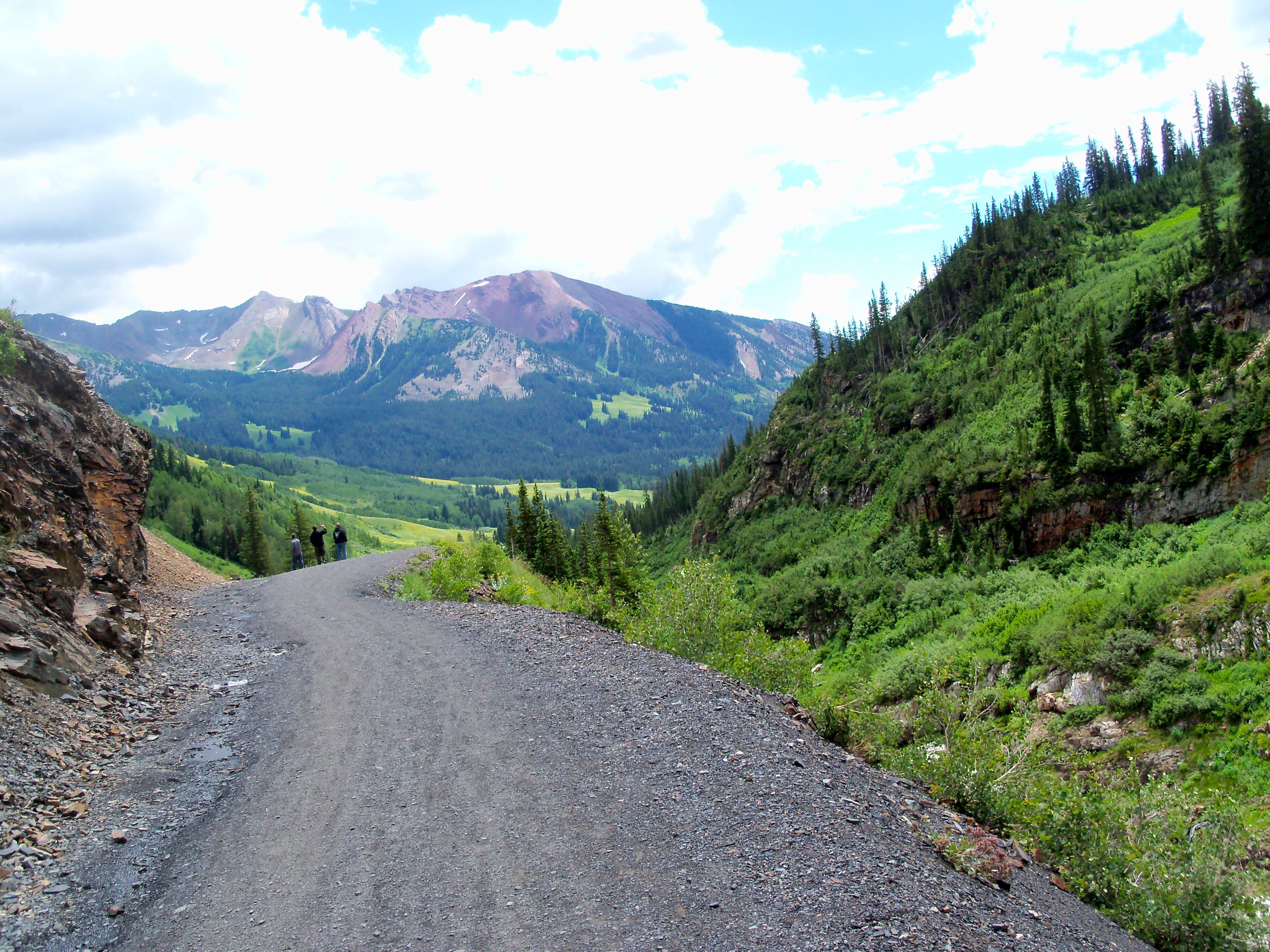 We spotted a mountain lake down below the road: it is one of the clearest blue lakes I have ever seen! 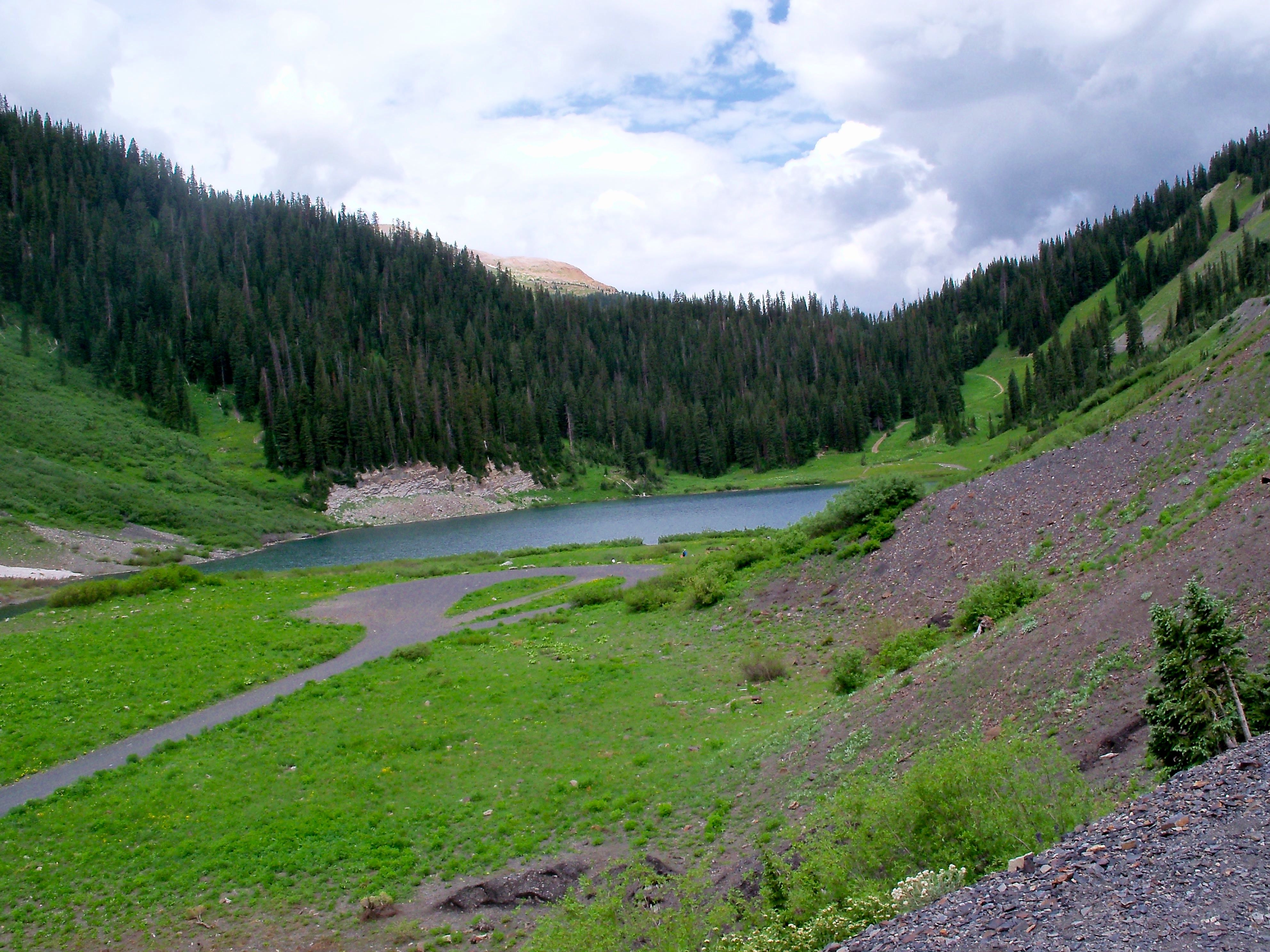 The most entertaining part of our entire climb up to the singletrack was crossing the snow. Yes, that’s right: snow. In the middle of August. 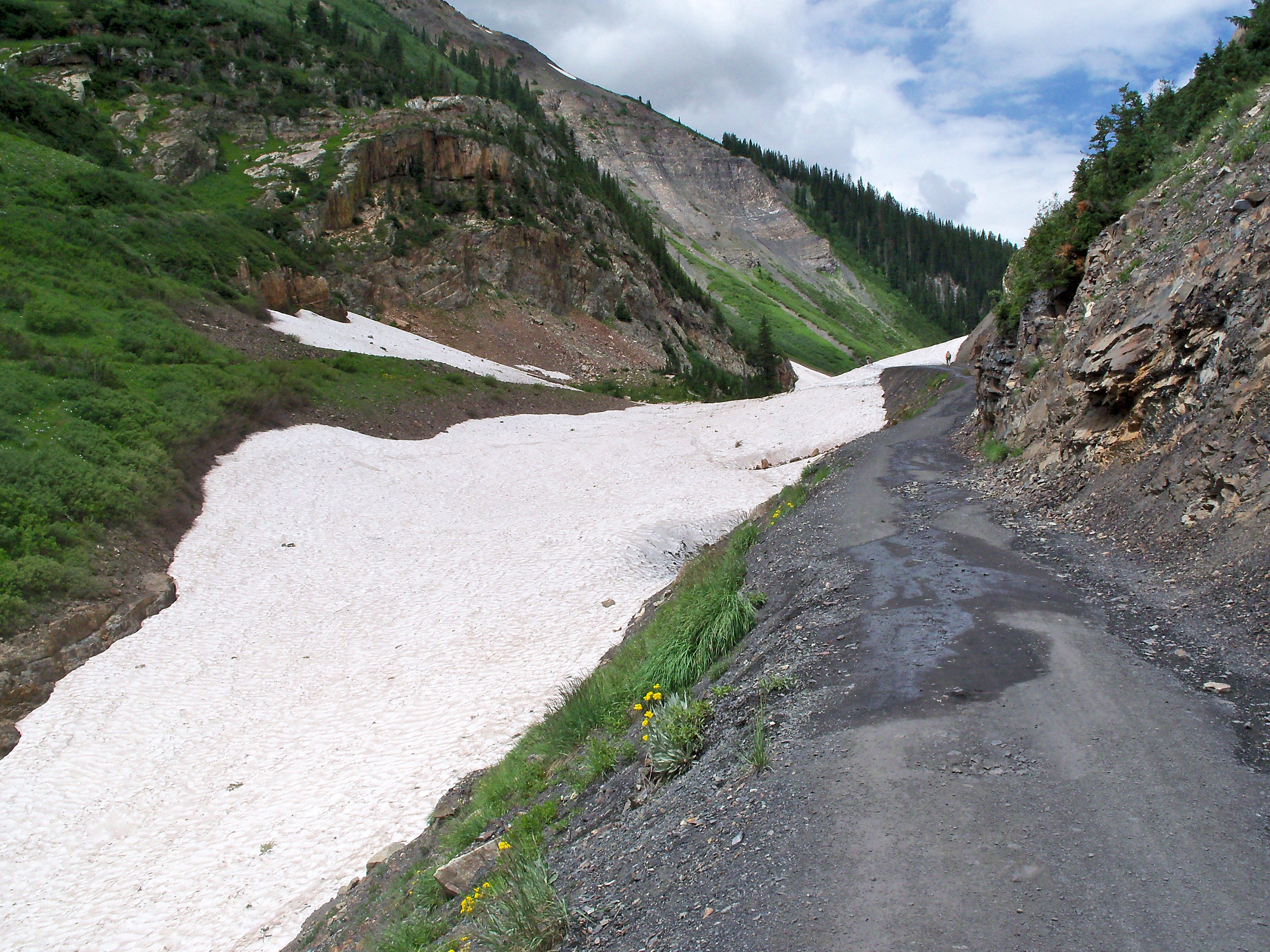 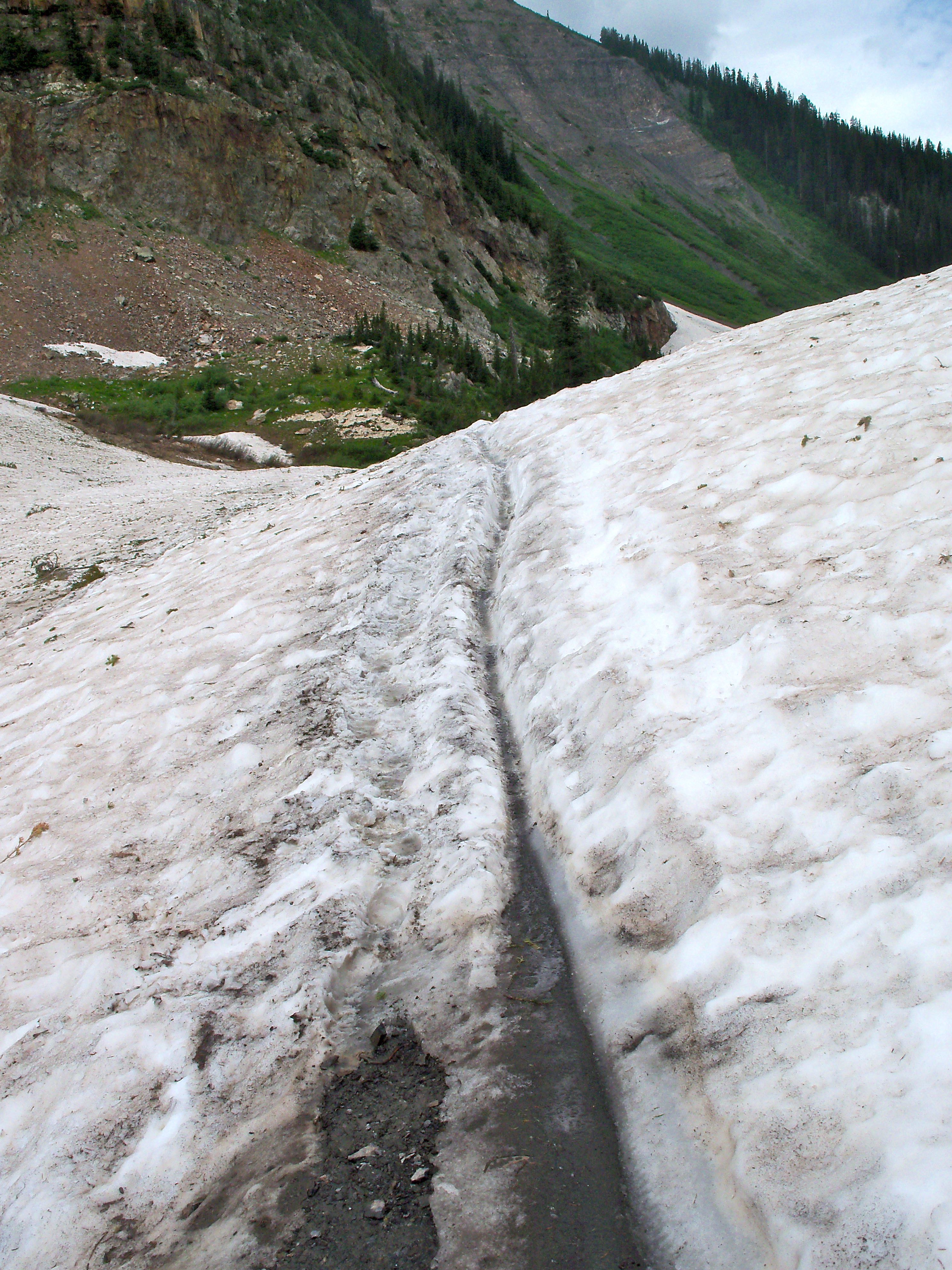 This mini-glacier lies at the very bottom of a steep-sided valley, protected from the warmth of the sun by the mountains and the elevation. I have no idea how deep that snow is, and I doubt anyone alive actually knows what the bottom of that ravine looks like. 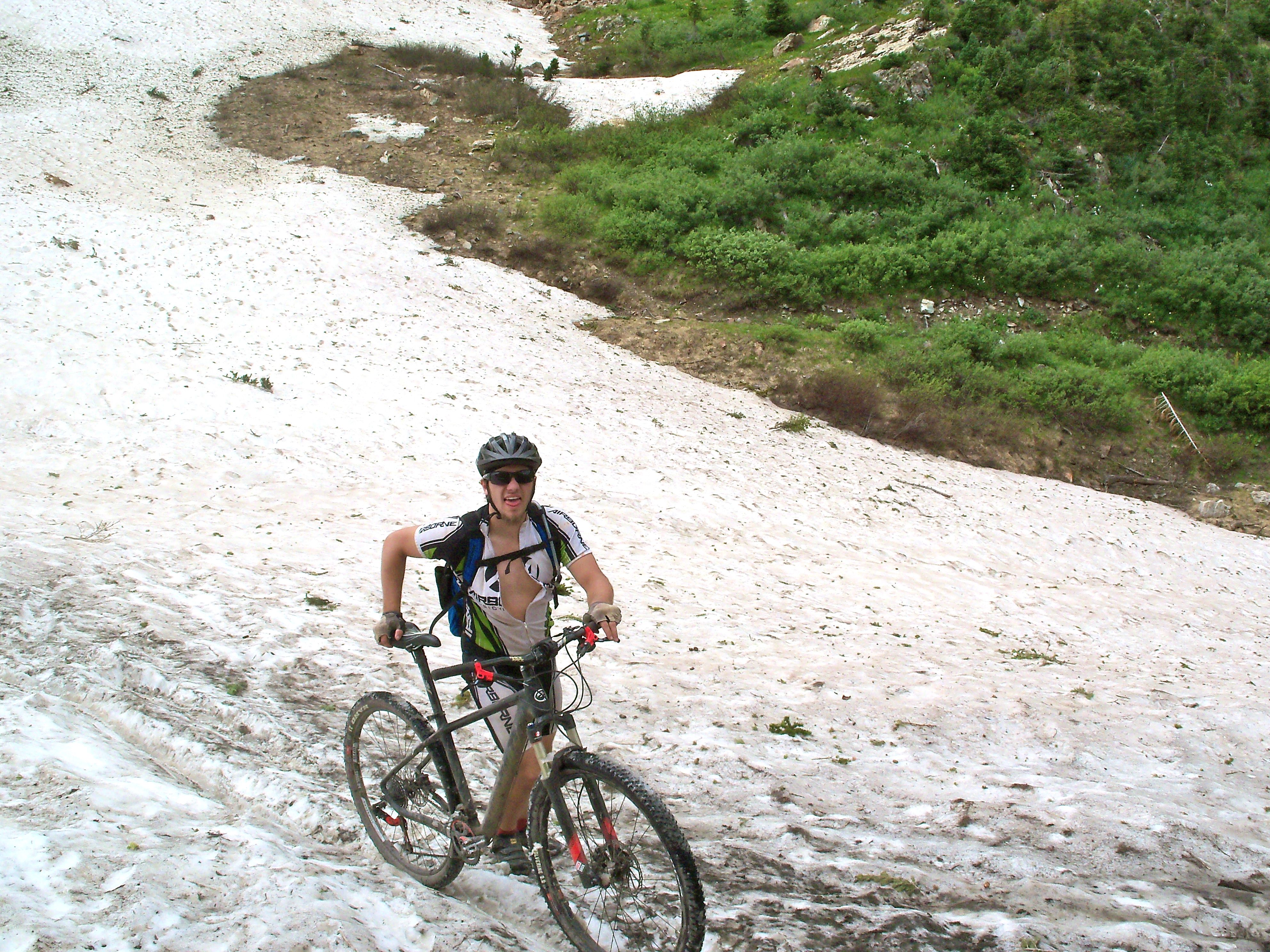 After much painful pedaling, we finally made Schofield pass! 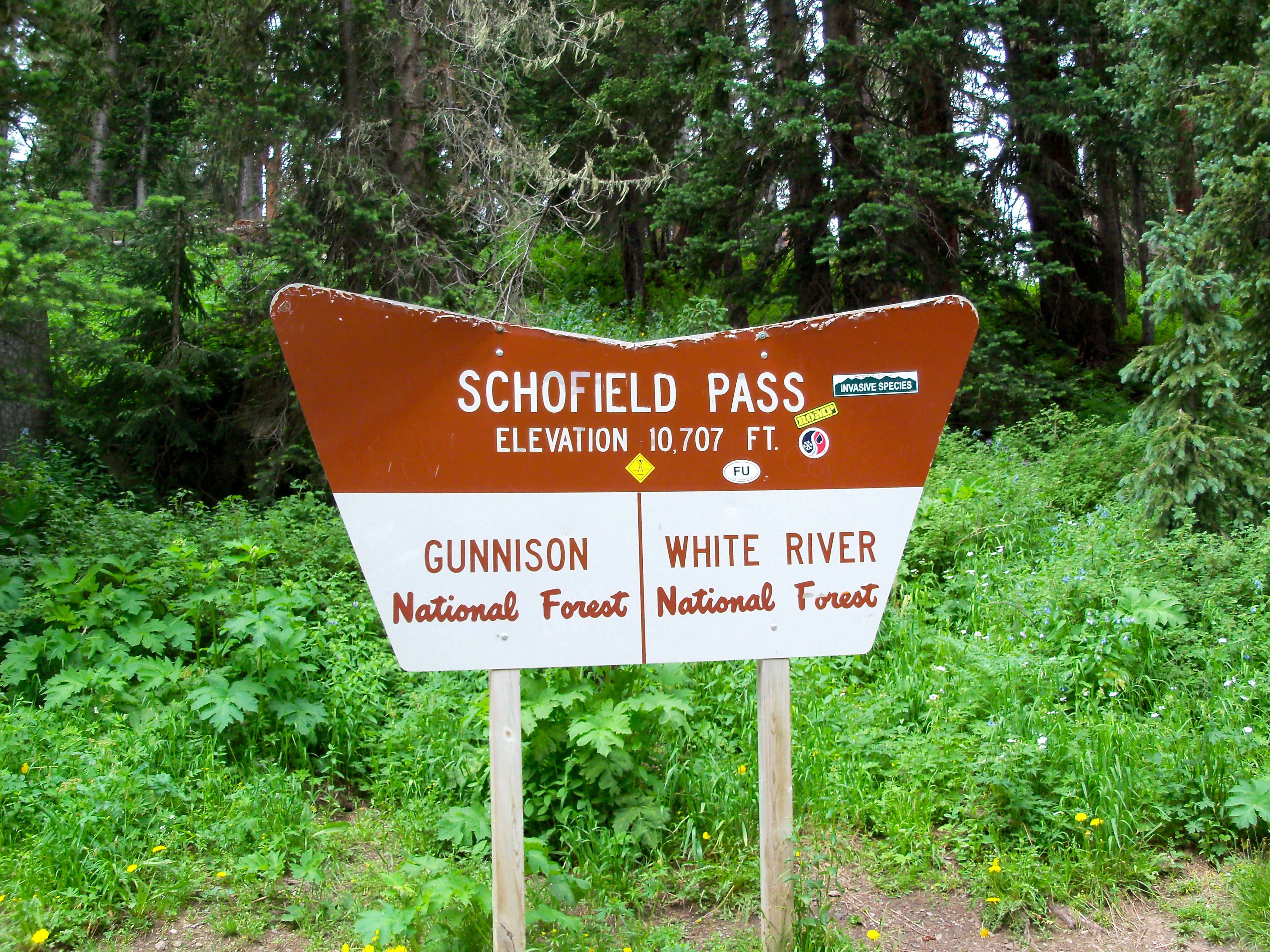 The climbing wasn’t done, though: we still had at least a mile of ascending on the singletrack before we reached the summit of our ride. After already having climbed about 6 miles of gravel road at high elevation, the last steep push to the summit was a challenge, both mentally and physically.

After climbing a ways through the woods, the trail broke out into a high alpine meadow: 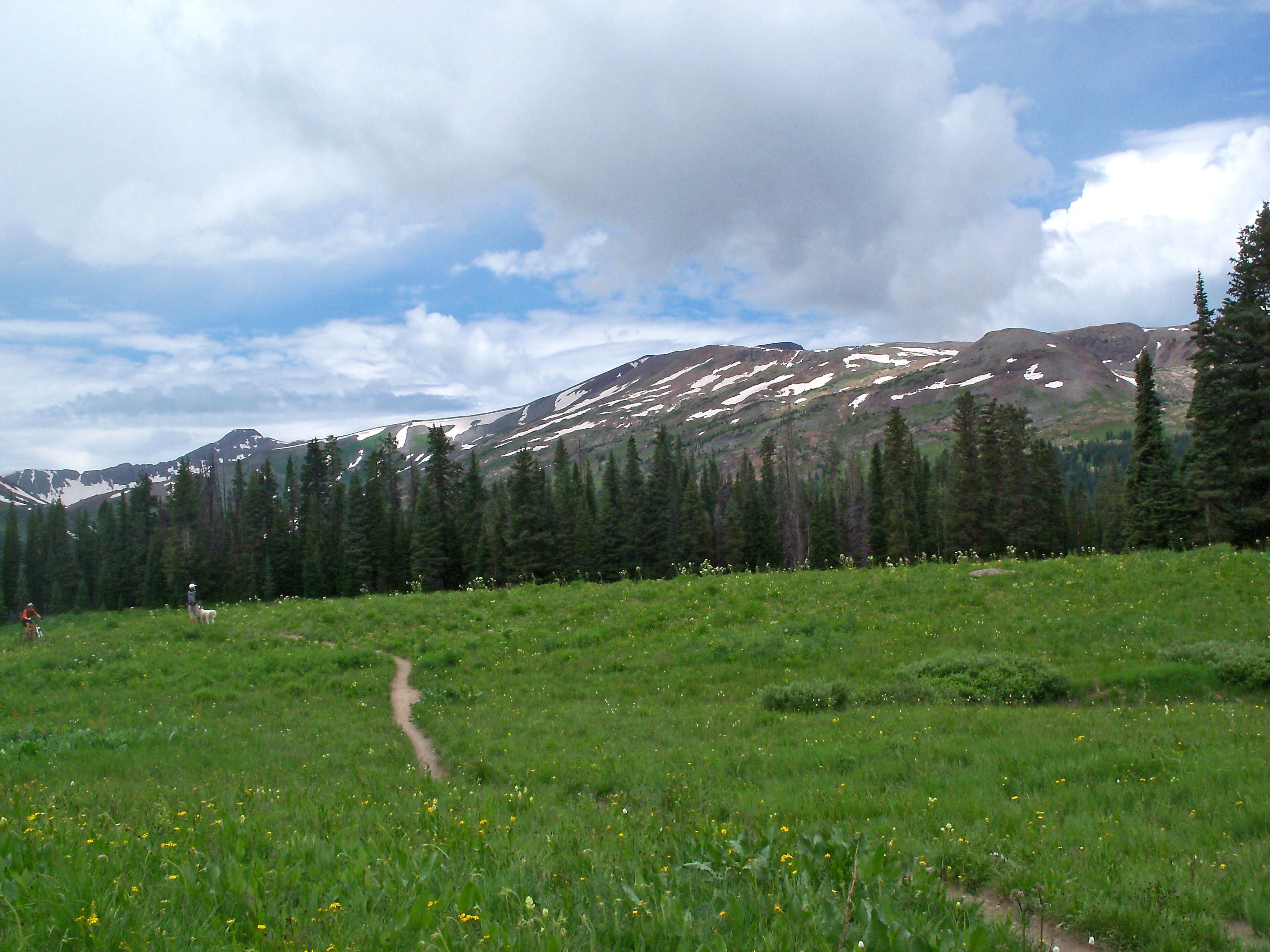 Looking back down through the meadow.

Finally, all of our hard work paid off, and we gained the high point: 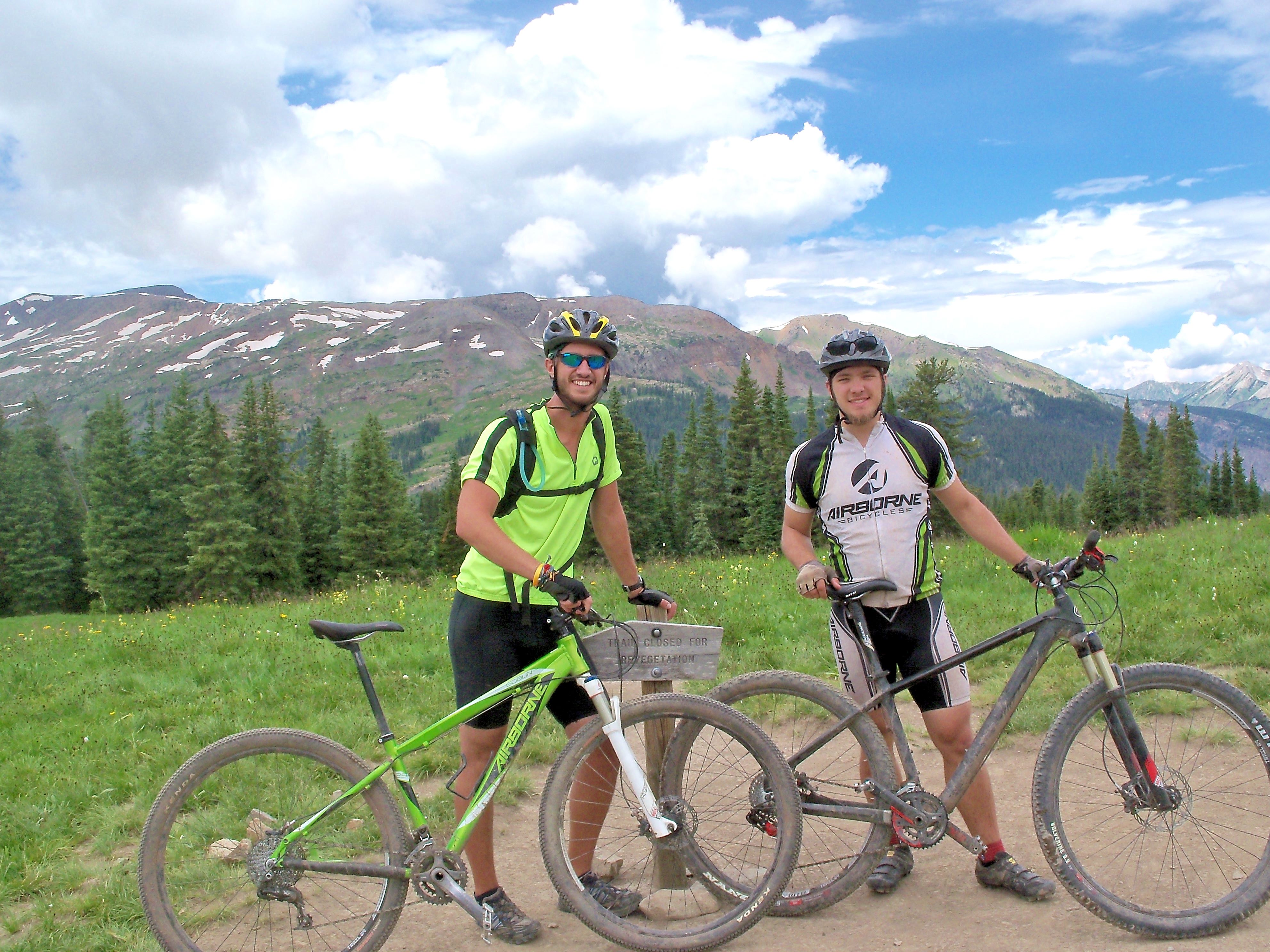 Andrew and Greg at the Summit.

While all of the trails in Crested Butte are at high elevation, Trail 401 stands out as one of the highest with the summit of the route resting at about 11,400 feet above see level! For two Georgia boys, the oxygen molecules are way too few and far between up there!

The high point of the route afforded incredible views in almost every direction. We enjoyed the especially stunning view to the north, looking into the Maroon Bells Wilderness: 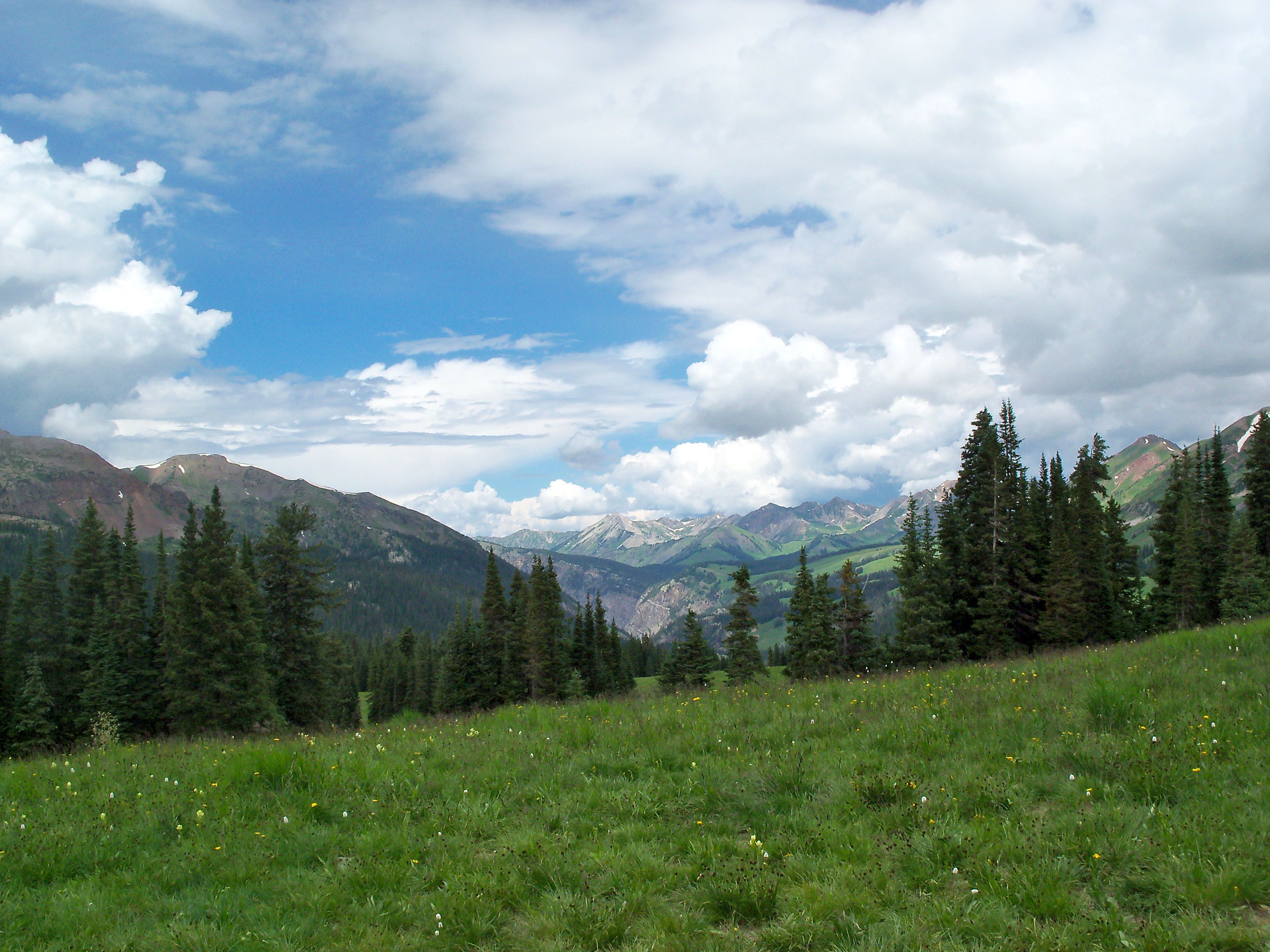 Everything up to this point had been the prelude to the main event, just the opening act: now it was really time to ride… it was time to descend! And descend we did: fast and furiously as we shredded the snot out of that singletrack, dropping as quickly as possible back down into the valley below. 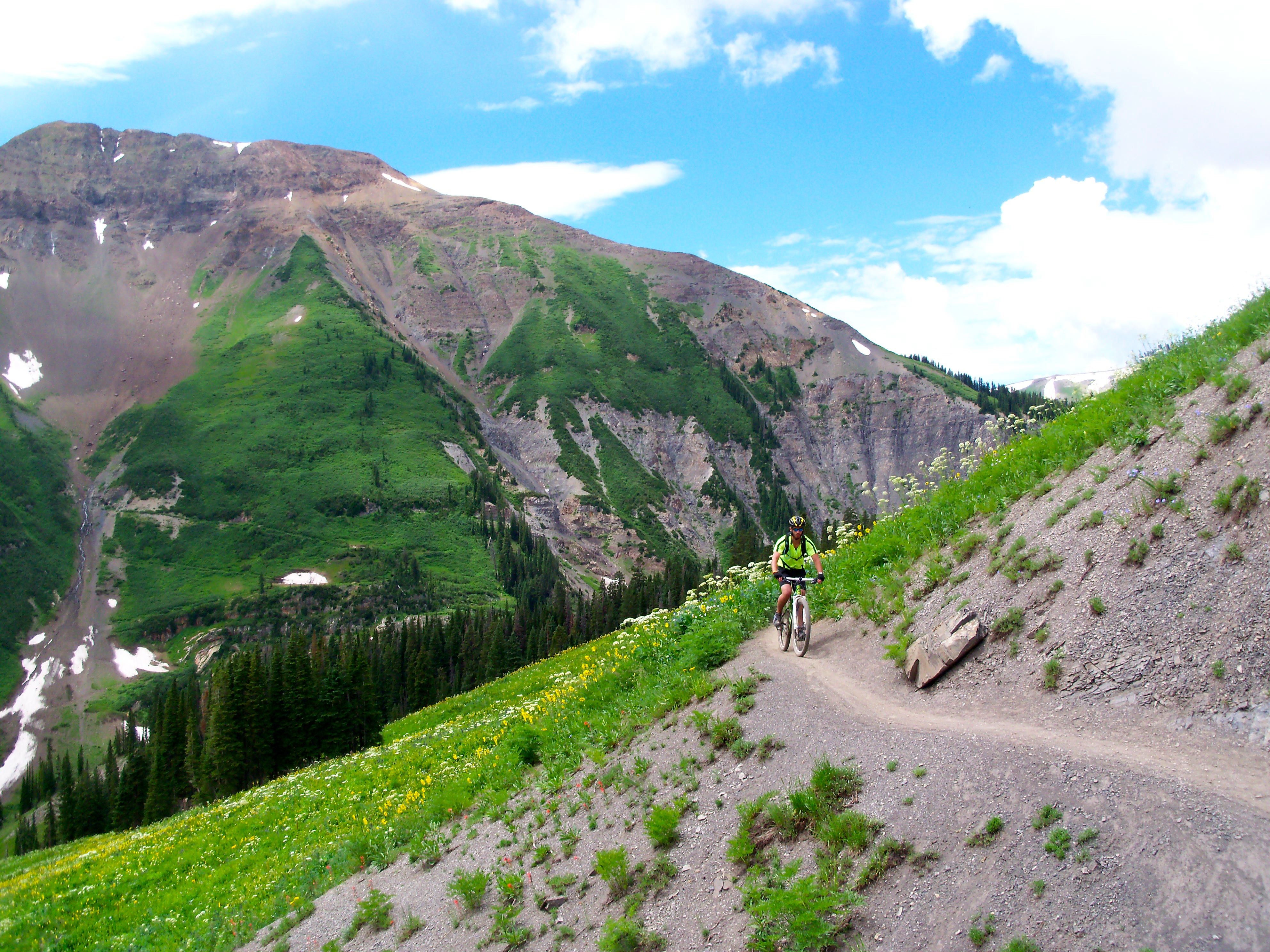 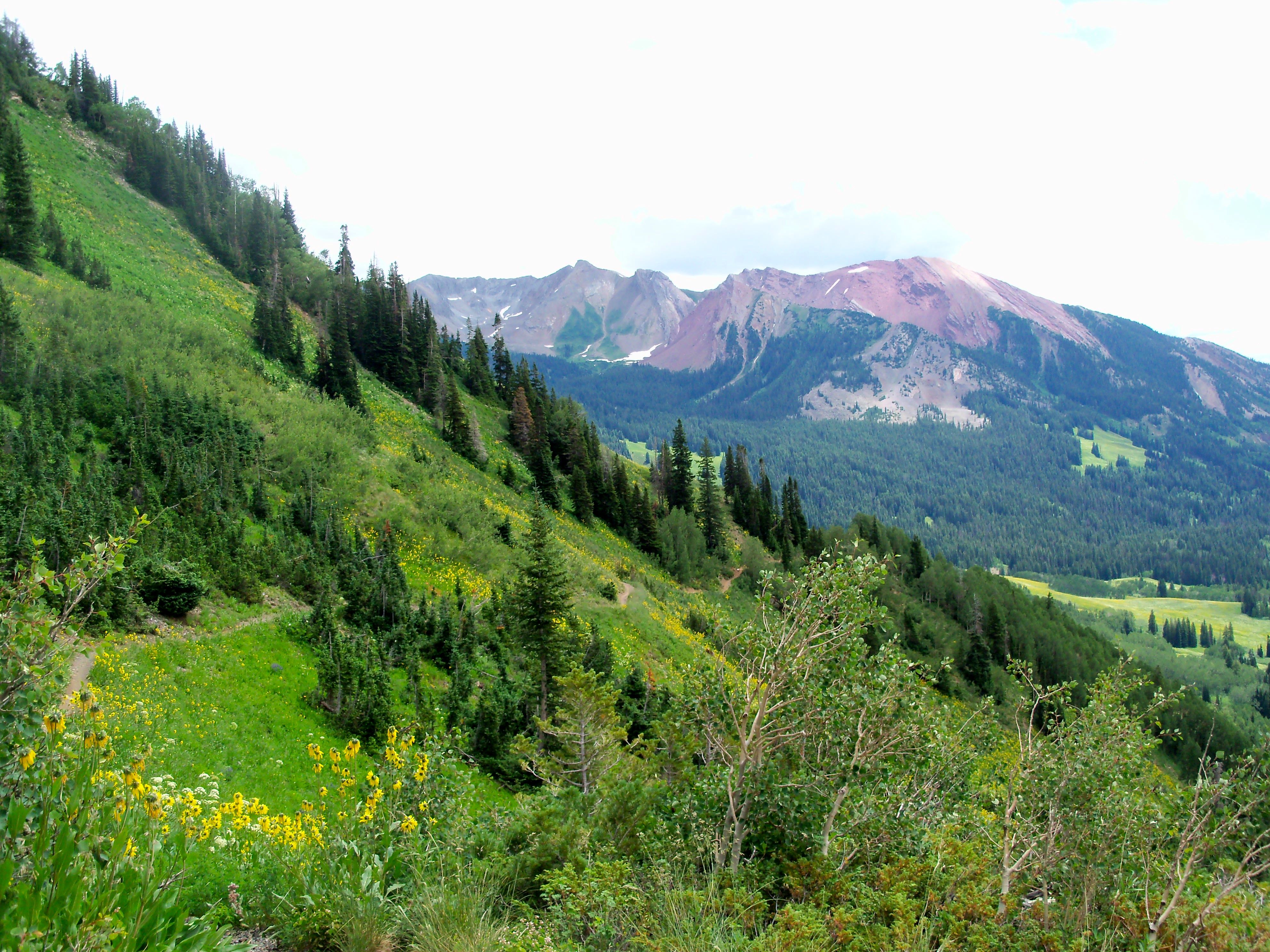 We were treated to incredible views all along the way. Riding through these high alpine meadows is so different from the deep forests of North Georgia… I found it hard to keep my eyes on the trail! 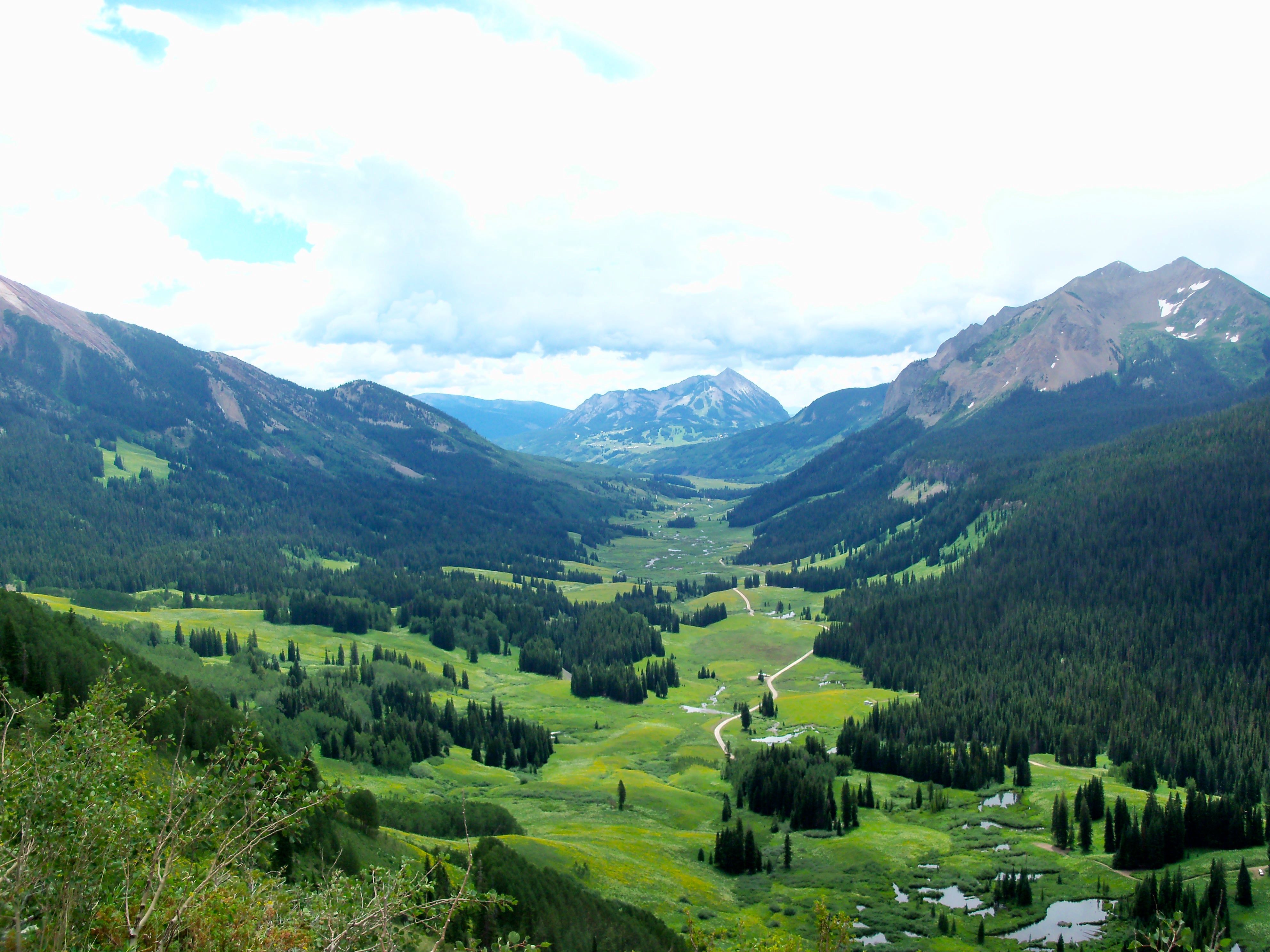 In the bottom of the valley you can see Gothic Road, which we rode up.

I hope all of these photos help portray how immense an experience riding Trail 401 is, because words just cannot do it justice. But still I must try…

“So what about the downhill? What was it like, how did you enjoy it?”

Yeah, I only touched on it briefly above, but as I mentioned, it was just phenomenal! The descent featured several extended straightaways where you could just let ‘er rip, sections with swoopy turns, and even a section of fast, bermed switchbacks in the meadow. It was a glorious descent, and yet I wasn’t able to shred most of it as I would have liked to.

In many of the reviews for Trail 401, people have mentioned the beautiful wildflowers right next to the trail that grow to head height. Sure, the flowers are pretty, but how does that affect the riding?

Personally, the wildflowers really harshed my flow. Not only was I getting whipped by the brush as I flew past, but the tall undergrowth made it absolutely impossible to see through the turns. As most of us are aware, the key to riding well is being able to look far down the trail so that you know what’s coming and can set up your line. This is especially important at high speed, which a descent like this is sure to offer. Instead of being able to truly revel in the speed of this mountain descent, I found myself either riding the brakes, or almost flying off of the many switchbacks hidden in the deep grasses. This tacky line of dirt will straight line through a meadow and then without warning feed straight into a series of switchbacks. I’m not complaining about the trail design in the least… it’s just that trail visibility in front of you is severely lacking.

On another negative note, the entire climb is on a gravel road. For many epic Rocky Mountain rides, that’s par for the course, but I can imagine how much more sublime this ride would have been if it was 100% singletrack instead of just about 60%.

Small quibbles aside, this was probably my favorite ride from my recent trip to Colorado! The grandeur and remoteness of this route coupled with the excellent singletrack will make this a winner in almost anyone’s book!

Trail 401 is definitely on my “Top 10 Trails of All Time” list… though maybe not at the top of it.

Your Turn: Have you ridden Trail 401 before? What did you think?

Community
Rooted Vermont: Business Up Front, Party in the Back—And All...
Gear
Get Away from It All with These Bikepacking Picks
Progression
MTB Coach Shares How to Time Mountain Bike Jumps and...
Gear
In for Test: Mullet Cycles' Single-Pivot 150mm Peacemaker
Subscribe
Login
Please login to comment
12 Comments
Most Voted
Newest Oldest
Inline Feedbacks
View all comments

Trail 401 is definitely top 5 for me. Great pics and write-up!

I rode in CB this summer and since I had already ridden Trail 401 I decided to hit Doctor Park with a couple of local guys. We ran into a couple other guys on the trail that were from Boulder and chatted them up about the trails they had ridden around CB. Anyway, one of the Boulder guys says, “Yeah, we rode 401 – it was ok.” After the Boulder guys left, the guys from CB were shocked. They had never heard ANYONE say Trail 401 was anything less than spectacular. And even for them, living in the area, it was still tops. Trail 401 isn’t just for the tourists – it really is an amazing experience.

Interesting. I have a few gripes, but I still think it’s stellar. Have you ever ridden Reno/Flag/Bear/Deadman’s in CB? I rode it a couple years back, and it was phenomenal! Quite a few locals I’ve talked to recommend that above 401… but I’m sure with much of this, it just boils down to personal choice 😉

We ride the 401 almost every year on our CB trips…this year we did Doctor’s Park instead, which was also pretty awesome. Still, you can’t beat the views on the 401 or the sweet downhill. I love the wildflowers because they make the side hill traverse seem a little less exposed to me. However, we’d never bike all the way up Gothic road! We drive about halfway to save ourselves a little pain and suffering.

once again about the tall wildflowers. once you do the trail more then say 5 times you know whats coming. just like any trail you ride more often, u get used to it and knows whats coming next. about the snow field. I have actually walked under the whole thing entirely. its like a snow tunnel. really cool!

Did you get a chance to ride Monarch Crest while you were out here?

@GimmeAraise, I hear you… any trail you ride you’ll get better once you memorize the turns. But a good rider shouldn’t have to ride a trail a half-dozen times to be able to truly shred it.

@maddslacker, No we didn’t… we had quite the busy schedule (I still have a couple more ride reports to write!) It’s been years since I’ve been there… I can’t wait to go back!

I’m always amused when I read reviews that say “What’s so special about 401?” Are you kidding me? Do you have no pulse?? I guess if you don’t enjoy fantastic scenery and the novelty (here at least) of riding thru tunnels of flowers then it might not be that big of a deal, but come on, even the riding is pretty damned great! OK, it isn’t technical — I took my 12 year old girls on it years ago and they had minimal skills at the time — but that doesn’t mean it isn’t enjoyable.

I’ve biked and backpacked the area for years and I just keep going back every year. I never get tired of it. I also enjoy the town, especially in the fall when the tourists have gone home. You gotta love a town where bicycles rule the sidewalks!

Btw, speaking of the Doctor Park and Bear trails, this year we combined Bear with Doctor Park. Talk about an epic downhill! 4,000 vertical feet of cruising. Definitely worth doing if you are in reasonable shape. By the end of the day my arms were worn out from pounding the bumps.

Just from the pics I don’t think I would care about the negatives. One of these days maybe I can get there!

@bonkedagain, I don’t recall bashing 401 on the whole. In fact, I remember saying “Trail 401 is one of the most renowned mountain bike trails in the nation and for good reason: it has all of the qualities that you could ever want in a classic singletrack ride” and “this was probably my favorite ride from my recent trip to Colorado! The grandeur and remoteness of this route coupled with the excellent singletrack will make this a winner in almost anyone’s book! Trail 401 is definitely on my “Top 10 Trails of All Time” list” 😉

@bikecowboy, Yes, the photos do speak for themselves, don’t they?

@mtbgreg1, sorry, didn’t mean to imply that you bashed it, just that there are reviews on this website and MTBR that say Meh. Hard to believe…

It’s all good man, I had a hard time telling if you were referring to the main post or someone else.

Spent a week i nCB this summer and luckily 401 opened 2 days before the end of the trip. AMAZING Ride! It was a big consideration in picking CB as the summer trip destination. Rode Mt. CB with my wife and daughter, they loved not having to ride up, wildflowers and the views!

CB is a very cool town and just adds to the fun.