Steamboat Springs is a mountain biking destination on the rise–and not slowly. In fact, the web of trails surrounding Steamboat is expanding in leaps and bounds with new trail development taking place at a rapid rate.

Before we get to the newest trails in the region, how did all of this development come to be? As with most towns, the impetus to grow as a mountain bike destination has come largely from a desire in the local community to build and expand their trail network. In addition to their classic branding as “Ski Town USA,” Steamboat Springs has branded themselves “Bike Town USA” as well. While I could easily make a case for a number of other towns ranking above Steamboat as “Bike Town USA” (note that Steamboat didn’t make our Top 10 Mountain Bike Destinations list, after all), many of the folks I’ve spoken with in Steamboat realized that they haven’t arrived yet. However, the folks in Steamboat are working hard to fulfill the Bike Town USA vision, and this drive to expand makes Steamboat an exciting place to visit and ride in!

Much of the hard trail building work is a result of involvement from IMBA and the local chapter, the Routt County Riders. This dedicated crew of mountain bikers has helped push mountain bike access in the area forward significantly. Steamboat was the winner of a Bell Built grant last year, with the money from that grant going toward building the Bear River dirt jump bike park, which features a legit expert line. Last year, Steamboat also applied for and earned a silver-level ride center designation from IMBA. Apparently IMBA was impressed with all the progress Steamboat has made, and they chose Steamboat for their biennial World Summit, which is held in a different location every other year.

While organization and effort are two of the key components to growing a mountain bike destination, you can’t make any headway–or at least, it’s easier to make headway–if you have money to spend. And with the recent lodging tax legislation passed at the end of 2013, Steamboat has money to spend on trails! As I reported in November of last year, funneling the area lodging tax into trail development over the next 10 years would provide at least $5.1 million in funding for new trails. Yes, you read that right: we’re counting in millions. However, that $5.1 million number isn’t fixed. Rather, the amount of funding is equal to the 1% lodging tax that’s levied. Word on the street is that revenue from the lodging tax is up dramatically in 2014, meaning that if growth continues over the next 10 years, millions more dollars than was originally estimated will be funneled into trail development. And with new trails being built left and right, why wouldn’t tourism continue to grow?

The Latest Trails in Steamboat

This summer, the Routt County Riders built a brand-new 4.2-mile trail on Emerald Mountain in a matter of a few months. Yes, it is a machine-built trail, but it was designed to provide a milder climb to the top of Emerald, where riders can then pick a much more challenging trail to descend. Dubbed Morning Gloria, the trail was just finished this fall, and has received rave reviews from everyone who’s ridden it. Unfortunately, I didn’t get a chance to ride it on my whirlwind tour, but I hope to next year!

As I mentioned in my news article last fall, one form of expansion that Steamboat is seriously pursuing is the legalization of the Buffalo Pass Trails. While I couldn’t write about them last year, I did have the pleasure to sample a couple of the renegade trails built near Buffalo Pass Road on my 2013 trip to Steamboat. While the legalization process is still ongoing, it sounds like the addition of these trails to the official trail system is inevitable. This is great news for Steamboat Springs: if the few trails I rode in the area last year are any indication, once these sweet slices of singletrack are signed and legal they may be the best-quality trails and most entertaining descents in the region–with gorgeous views to boot!

Not only are the nonprofits building trails, but private companies are chipping in to the local trail development. Steamboat Ski Resort is continuing to expand their downhill bike park, and in 2014 they’ve completed a whole new trail: Flying Diamond.

On the final day of my whirlwind Steamboat Springs tour, I headed up to Steamboat Bike Park for a morning of shredding–and specifically to check out the Flying Diamond trail. Steamboat hired the famed Gravity Logic crew, hailing from Whistler, to build this new freeride masterpiece. While I was a little stunned to hear that they’d spent an entire summer building a trail that’s only about one mile in length, after I dropped in and experienced it for myself, it all made sense. 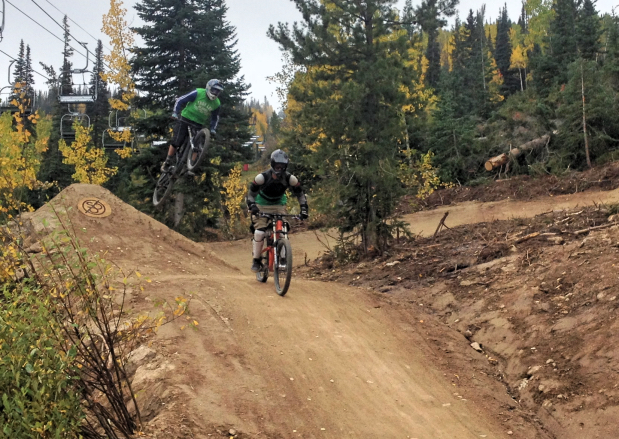 The scale of Flying Diamond is unlike any trail I’ve ever ridden (guess I need to get up to Whistler?). Gravity Logic moved mountains of dirt to sculpt massive table tops with humungous takeoffs, berms that were easily twice as deep as I am tall, and all in a never-ending flow of radical that descends through a grove of beautiful aspens. 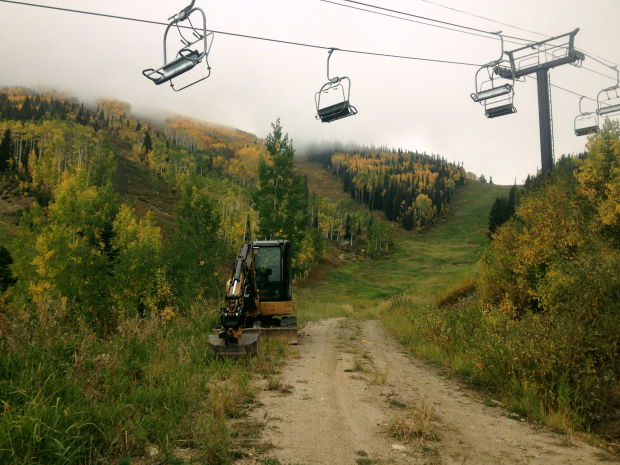 To get a small taste of the immense amount of work that went into building this trail, check out this video explaining the construction of one single corner:

I’ll be honest: most of these jumps were way above my pay grade. With massive tables and booters, I can’t even begin to fathom the amount of air you could catch on some of these hits. I made my way down them, though, rolling most of the jumps, getting a bit of air here and there, and skirting around some ridiculously-sized monsters in the leaves on the side of the trail. But even from my meager attempts, I could tell that the flow and the design of this trail would set the rider up perfectly for jump after berm after jump–if only you can hit all the transitions and maintain your momentum. While this line was above my skill level, plenty of other riders were out sessioning this line–and they aired it out in style!

To watch some riders taking full advantage of Flying Diamond, check out this video:

After attempting to shred Flying Diamond and failing horribly, we headed down to where it all began: Creekside.

Creekside is an old national forest trail that Steamboat locals have been shuttling for years. In fact, it became such a popular shuttle run that nobody would ever pedal or walk up it anymore, because you’d be guaranteed to be runover by some hooligan flying down it at top speed. In an attempt to satiate this desire for downhill speed in a relatively-controlled environment, the Steamboat Bike Park was born. While Creekside is still a two-way trail and hasn’t been fully adopted into the bike park-specific trail system, it’s still a great romp down the mountain!

We were riding dual-crowned downhill bikes, which were undoubtedly overkill for Creekside, but nevertheless we had an awesome time dropping down this tight, curvy, old school singletrack, with some great technical features and rocks thrown in to keep things interesting. This is exactly the kind of trail I could lap again and again on my GT Force–what an absolute riot!

Having ridden the newest of the new and the oldest of the old in one run, I was struck with the impression that Steamboat really knows what’s up. The old trails are still open and accessible in a more-or-less unaltered state, but new trails are being added every year. Yes, many of the new trails are flow trails, but some of them–both inside the ski resort and out–are gnarly and challenging.

At this rate, I can’t wait to see how much Bike Town USA will grow and expand over the next decade. Stay tuned to Singletracks as I continue to cover this burgeoning mountain bike destination!