Some of the best mountain bike trails I have ever ridden are locals’ favorites and have never been written about in a magazine or on a website. Other trails have developed a far-reaching legacy, and have become renowned worldwide as world-class trails. But to be honest, some of the famed trails I have ridden just haven’t lived up to the hype. Slickrock comes immediately to mind.

The McKenzie River Trail (MRT) between Eugene and Bend, Oregon, is a trail with a legacy and renown that has permeated mountain bike culture. When I first started planning my summer 2013 Oregon road trip a year prior, the McKenzie River Trail was the first one to go on my wishlist! The question was, would it live up to the hype, or be a letdown? 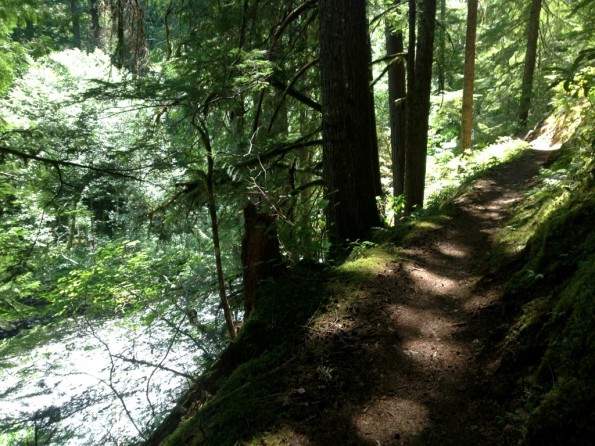 The MRT runs 26 miles one-way, so if you want to ride the entire trail it’s best to do it as a shuttle (or one very long, arduous out-and-back). Since we were staying in the Bend, Oregon area, I hooked up with Cog Wild for their McKenzie River Trail shuttle. The trail itself begins about an hour and a half drive from Bend, so the $60 cost for the shuttle includes transportation from Bend to the trail, pickup at the bottom of the trail, and a ride back to Bend.

Upon arriving at the trail, I was itching to shred and didn’t want to get held up in traffic, so I hit the singletrack as quickly as possibly.

Much of the MRT consists of loamy, narrow singletrack, hidden hundreds of feet below the canopy of massive Douglas Fir trees. While much of Oregon was logged in the late 1800s and early 1900s, the steep banks along the McKenzie River proved too challenging, so much of the timber here is massive old-growth–there’s no telling how many hundreds, if not thousands, of years old these trees are! The beginning of the trail passes beneath the massive trees for a mile or so before opening up next to Clear Lake.

The tread along Clear Lake consists of sharp, challenging Lava Rock, so try to peel your eyes away from the deep blue depths and focus on the challenge at hand.

The bulk of the trail twists and turns through the deep woods, affording regular, gorgeous views of the McKenzie river, which the trail crosses at several points. Be sure to bring your camera to stop and take in the waterfalls–the amount of water moving off of these cliffs is just phenomenal!

Another outstanding view is the Blue Pool. At one point, the McKenzie River disappears underground, only to later well up through the rocks below the Blue Pool, and then continue flowing down the valley. The Blue Pool is cold, clear, and deep, but take care if you decide to jump off a cliff into its depths.

The tread alternates from loamy, rooty singletrack with excellent flow to challenging lava rock, and back again, thus providing a very entertaining and ever-changing ride. On average, however, the first half of the ride is more technical, and the second half is flowier and smoother.

While some trails don’t live up to the hype, the MRT most definitely does! The combination of camera-defying views, entertaining trail tread, and a variety of ecosystems has made the MRT a longtime classic that isn’t likely to dull with the passage of the years.

Despite being relatively flat for a shuttle ride (1,500 feet of descending, 1,000 feet of climbing) this trail has instantly rocketed onto my list of the top 10 trails I have ever ridden. It might not be on the top of my top 10 list, but it definitely competes with the best trails in the nation! If you’re ever in Central Oregon, make sure that you ride the MRT.

Great report! This one has been on my list for a while.