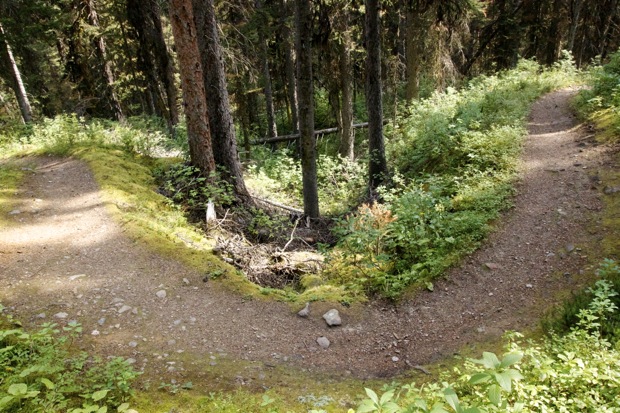 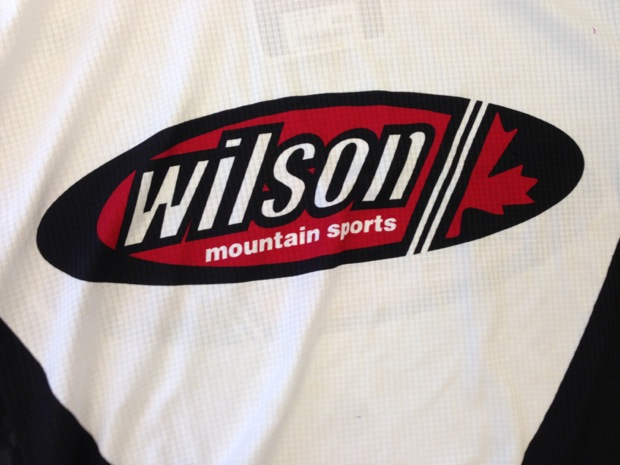 We met Bill Keeling at his shop, Wilson Mountain Sports, in the morning and browsed around the shop while we waited for Bill to get geared up. Wilson Mountain Sports has a large rental fleet of Devinci 29er hardtails and a full bike repair shop along with accessories like helmets, gloves, and maps for sale.  There’s even a repair stand stocked with free lube and  an air hose for DiY fixes, plus a water bottle filling station outside the shop. 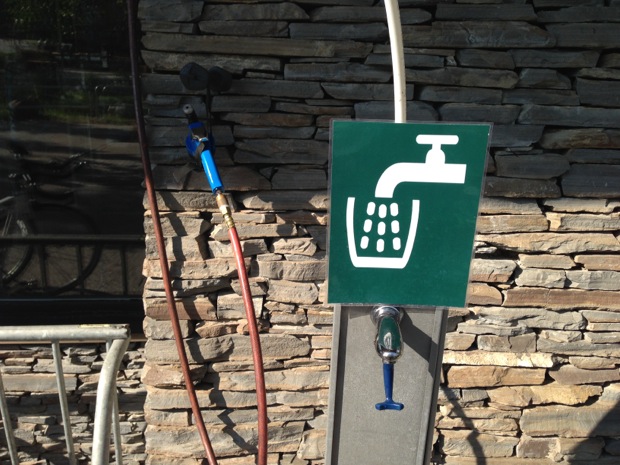 Bill’s cousin Justin, a professional motocross rider visiting from Manitoba, joined us for the ride and we rolled right out from the shop. We patched together a few short singletrack trails to get us across the river and railroad tracks and onto Tramline, an old railroad grade that gradually climbs from the valley floor to Lake Louise. Officially, I would rate Tramline and most of the trails we rode in Lake Louise as wide singletrack or perhaps even doubletrack… but honestly, it doesn’t matter. Everything we rode was scenic, wild, and grin-inducing, especially on the way back down! 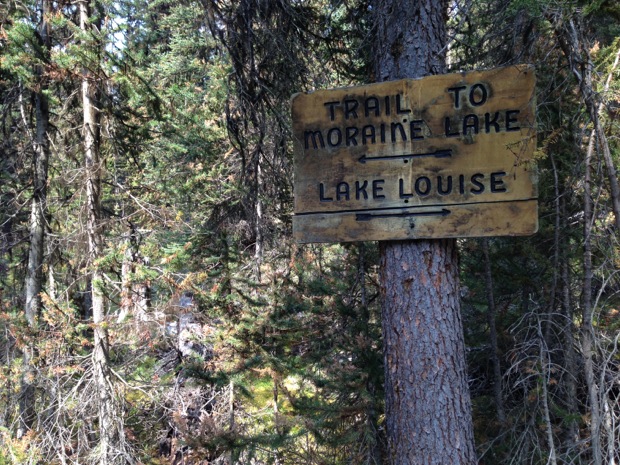 About halfway up Tramline to Lake Louise, we took a left to link up with the Moraine Lake Highline trail, perhaps the best-known MTB trail in the Lake Louise area. We had heard rumors that the Highline portion of the trail was closed to bikes this time of year for bear season, so our plan was to ride until we saw a sign telling us we couldn’t go any further. 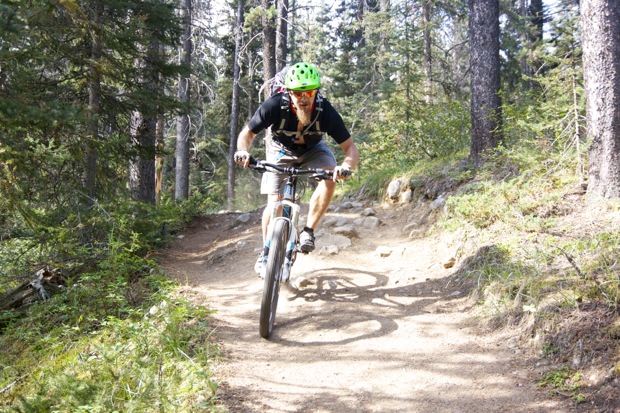 The first section of the advanced-rated Moraine Lake trail was a web of roots through flat, swampy terrain. Keeping our momentum up was tricky, but the roots quickly gave way to a rocky and more narrow trail corridor. Bill warned us about the next section starting just after the bridge over the raging Horseshoe Creek, claiming it was known as the “world’s toughest climb,” and that he only knew of one person who had successfully cleaned the entire thing. Never ones to back down from a challenge, Greg and I decided to go for it! 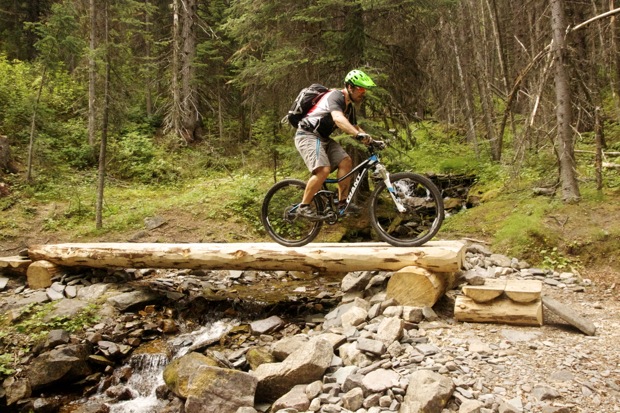 The trail is steepest just past the bridge and after about 100 yards I dabbed one foot on the way up, though Greg cleaned it with ease. From here, we both stayed on our bikes and pedaled the (sometimes steep, though rarely relenting) climb for at least a couple miles.  We ended up overshooting our turnaround point at the top of the climb, descending a quarter mile or so to the Highline Trail where we found a sign telling us the trail was closed ahead for bear season. Word on the street is the view of the Valley of the Ten Peaks at Moraine Lake is incredible and makes this so-so trail worth every pedal stroke! 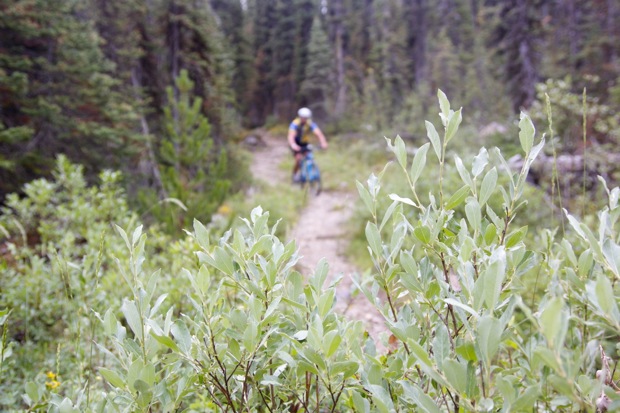 From the turnaround point, we bombed back down the Moraine Lake Trail and what had taken us the better part of an hour to climb took just 10 minutes or so to descend. Some parts of the trail seemed even steeper going down, which is always a good feeling! Past the bridge I got a bit too much of that good feeling and flatted in a chunder-filled rock garden.

We returned back to the Tramline trail and this time continued on Tramline up to Lake Louise. Bill took us on some singletrack trails that skirted the main parking lot, popping us out at the lake–and boy, were we shocked! First, the beauty of Lake Louise is hard to explain, and it’s unlike any place I’ve ever been: electric blue waters, towering mountains, and a hulking glacier at the far end of the nearly flat lake. But the other shocker was the number of tourists at the lake (ourselves notwithstanding). It was tough to get a photo in without having half a dozen random people posing right beside us! 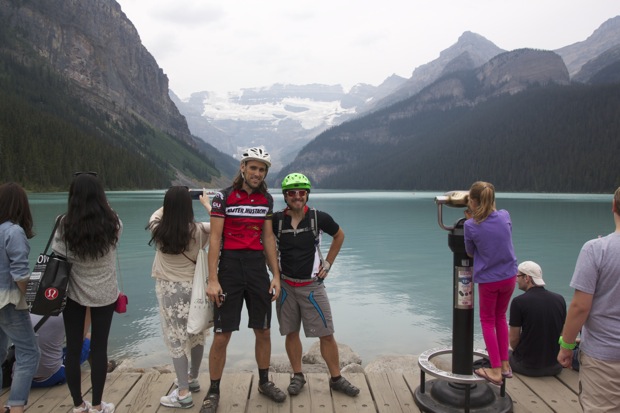 After taking in the views we headed up around the Chateau Lake Louise and sniffed around for the Ross Lake trailhead. Bill and Justin bid us adieu as Greg and I headed out for more.

According to the Parks Canada map and guide, the Ross Lake trail is “7.2km one way, no elevation gain.” Strava and our legs, however, beg to differ. It turns out the actual elevation gain one-way to Ross Lake is about 800 feet, though the start and end points of the trail are at roughly the same elevation. That means that to do this as an out and back, riders are actually climbing closer to 1,600 feet. 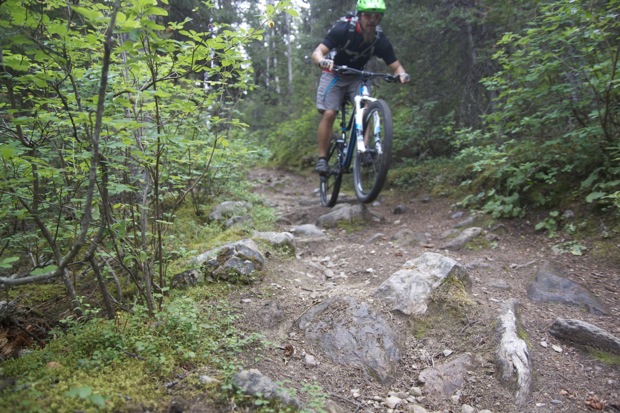 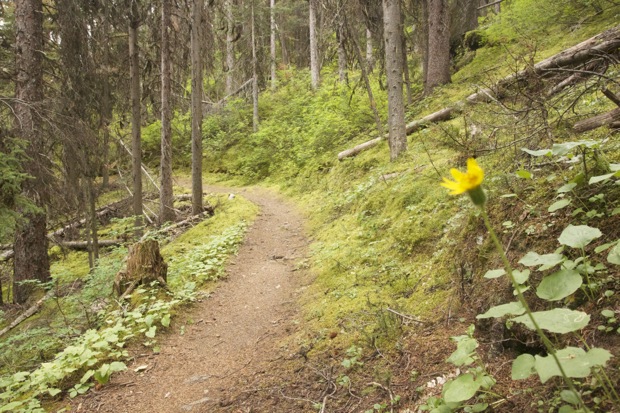 The singletrack on the way to Ross Lake was quite entertaining, technical at times, and featured a couple raging, rocky stream crossings and one massive cascade. At Ross Lake we found a long wooden boardwalk and an entire glacial lake all to ourselves. The water in Ross Lake wasn’t nearly as blue as the water in Lake Louise, perhaps because it was much shallower where we were. Still, the water was clear as plexiglass and nearly as smooth. 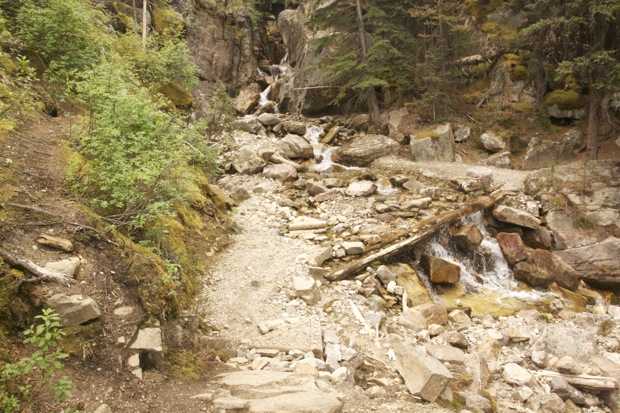 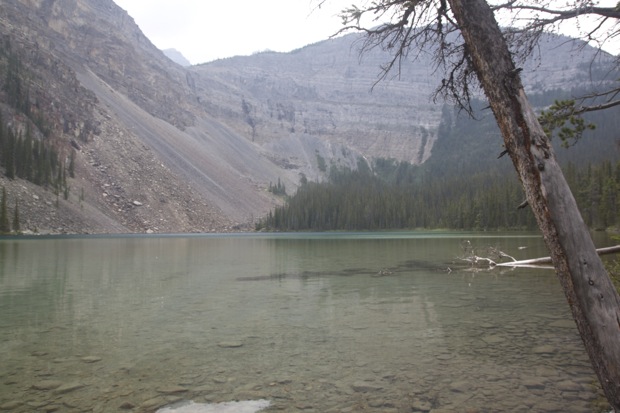 From Ross Lake we decided to descend to the Great Divide road rather than go back on the trail, and the singletrack descent to the road was perhaps the fastest part of the ride. The Great Divide road is a former highway that’s been closed to vehicles for years, giving the road a post apocalyptic vibe. Within about a mile or so we came across what appeared to be an old welcome center with information about Yoho National Park. Looking more closely, we realized we were now outside of Banff NP and in Yoho NP on the British Columbia side of the border! 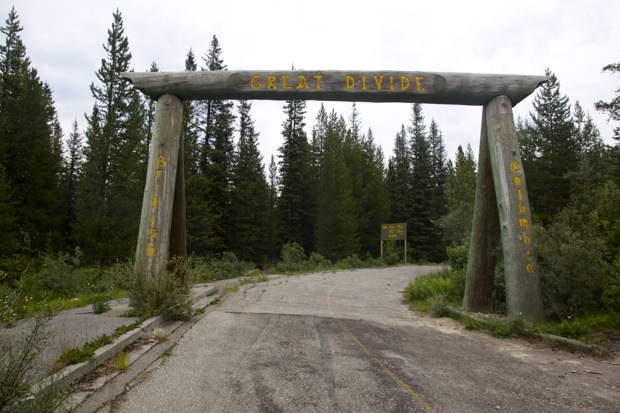 Slogging along the Great Divide road was a bit of a grind with straightaways that seemed to go on forever but still, we saved a ton of time and energy over returning via the Ross Lake trail. Past the gate on the Great Divide road, we descended back to town via Tramway for a 28-mile round trip and 3.5 hours of ride time.

There are a few other bike-legal trails in the Lake Louise area worth mentioning, including Pipestone and the beginner-friendly Bow River Loop, though sadly we wouldn’t have time for either ride.

Greg and I had a great time exploring the lakes and sights around Lake Louise, and our mountain bikes allowed us to cover a ton of ground. Outside of our own group, we saw no one else riding the trails and just a handful of hikers, which made us feel like we were experiencing the park in a way that no one else did that day. While Lake Louise may seem a bit disconnected from the trails in Banff and Canmore, it’s definitely worth the trip if you’re looking for singletrack solitude!

Stay tuned for the skinny on mountain biking in Canmore, next week!