With Oakridge’s marquee trail (the Alpine Trail) checked off my wish list, I was free to start exploring some of the area’s less-famous rides. But first, before I got to more exploring, it was time to take a break.

Any mountain biking road trip of epic proportions requires downtime for rest, recuperation, and rejuvenation. A couple of friends from Seattle drove down to Oakridge to join us camping and chilling for a few days, so this served as a great time to take a break from riding and let my legs recover.

Unlike Bend, the camping opportunities in and around Oakridge are plentiful. We settled on Black Canyon for its proximity to the town of Oakridge, and the fantastic reviews… but there are plenty of other great campgrounds in the area as well! Just check out Tripleblaze for a few of the many options. 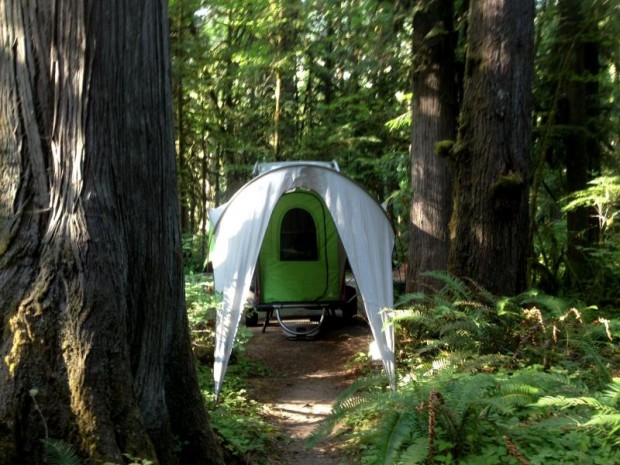 Off the Bike in Oakridge

Without a doubt, the place to go for food and beer in Oakridge is the Brewers Union Local 180. A true public house in the British style, they serve fantastic food and some of the best cask-style beer (brewed in-house) you may ever drink!

While there are a few other local coffee shops, restaurants, and dive bars, there isn’t much entertainment to be had in town. This logging town-turned-mountain biking destination definitely hasn’t grown into its destination status yet. And in my opinion, that’s totally fine: I find overdeveloped, fruity-tooty tourist traps almost as repulsive as big cities. Oakridge is still very much a raw, genuine, rather economically-depressed mountain town.

However, despite the lack of a local “scene,” after getting some tips from the good folks at Willamette Mountain Mercantile, we decided to stroll up the gentle Salmon Creek Trail to explore the river. We found a few deep (but still cold) swimming holes, and a fabled rope swing that provided an hour of enjoyment.

While this isn’t a town where you go out to explore the nightlife, if you love the beauty of deep forests and crystal-clear rivers, this is the place for you!

While it’s a haul from Oakridge to Bend (just under two hours), these two towns are still in the same general region. This is great for both people living in the area (everyone I talked to in Bend loved to travel to Oakridge to ride), and those of you who are now planning to visit this area (I highly recommend riding in both Bend and Oakridge). This proximity worked to our advantage with Summer’s unfortunate biking mishap a few days previous.

Unfortunately, there was too much swelling for the first Xray to determine what was wrong with her arm, and we feared the worst: a broken arm or a broken elbow. So, a few days later, we treked back to Bend for some updated Xrays. After a awfully long wait at the hospital, we finally got the results: her elbow wasn’t broken, it was just a really bad sprain. While Summer still couldn’t bike for the rest of the trip, this was fantastic news! She didn’t have to get a cast, and her recovery process was much quicker.

We headed back to Oakridge, and despite a hiccup not being able to get over the pass at night due to construction, and having to spend a night on the Bend side, this day still proved to be a fantastic relief!

In our experience, every major road trip will present some sort of major difficulty or challenge that you don’t expect. Thankfully, this challenge wasn’t as bad as it could have been, and we were able to get back to camping and hanging out in the mountains of Oregon.

I decided to tackle the Larison Rock Trail as an easy afternoon jaunt, which reportedly finished with a wicked-fast descent. Since it was only going to be a 10-12 mile ride if I pedaled up the road (and half that if shuttled), I decided to begin at Greenwater Park, grind my way up the pavement, and then finish the climb on dirt to the top of Larison Rock before beginning my descent.

Since I had a car and my lovely wife available to shuttle me… what a foolish decision on my part! The 6-mile paved climb felt brutally steep, and was a lesson in pain and boredom aboard a 32-pound full-suspension mountain bike. It would have been such an easy drive, too… if you have the opportunity to get a ride to the top, take it!

Nevertheless, I eventually made it to where the trail intersects the pavement, and I decided to pedal/hike the last little bit of singletrack to the top of the trail’s namesake: Larison Rock. While you don’t need to climb the last section of singletrack in order to access the main downhill, the view from the top was well-worth the additional effort: 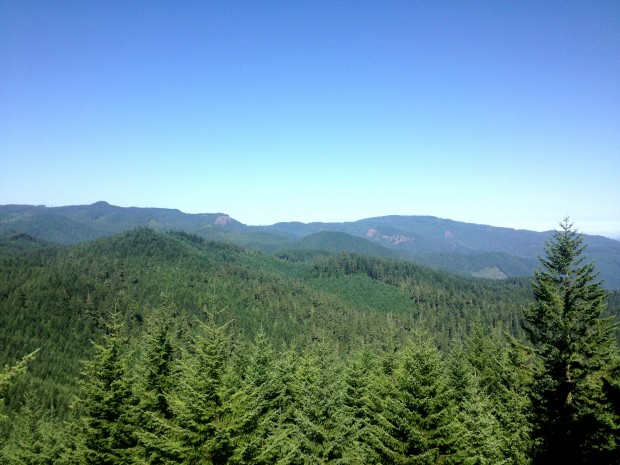 After a quick break to eat and recover, I finally turned my tires downhill… and man, did the trail ever live up to its description!

While rather smooth with loamy dirt in most places (with a few rocks thrown in), the difficulty from this trail abides in its sheer steepness, speed, and exposure. The singletrack plummets down the steep mountainside like a rushing river! 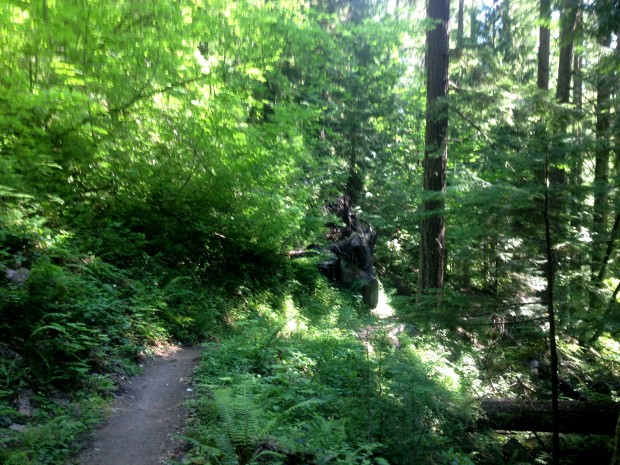 Flying between the trunks of massive trees at extremely high speeds with a sheer drop off on one side is a white-knuckle experience. Even though I tried to let off the brakes and flow as much as possible, I think my pads were still sizzling in an effort to control the steep, treacherous freefall back down the flanks of Larison Rock.

While I love flowing, effortless descents as much as the next guy, there’s just something about a steep brake-burner that gets the adrenaline pumping like none other!

Add Singletracks to your circles on Google Plus to stay up-to-date as I explore Singletrack around the US!

Went to Oakridge last year for the first time and we’re making plans to go back to Oregon this year. While I agree with you about the ultra-touristy towns, Oakridge is severely lacking in necessities IMO. When we asked at the Mercantile where to get a good breakfast, they told us ‘Dairy Queen’. I realize the pullout of the logging community drastically altered the economic prospects of the town. The city leaders need to high tail it down to Fruita (and other similar towns) to ask for advice on turning the town into a MTB mecca.

The town has TONS of potential as the riding is thru the roof phenomenol (sp?). We rode the Alpine-Tire Mountain-Clover Patch route and while Tire Mountain is probably the best single trail I’ve ever ridden, the area had the worst signage of any trail system I’ve personally ever ridden. Before the ride, we asked for advice from the shuttle company and got a generic “make a left at the big tree” kind of advice.

But the bottom line for those that have never been and like the forest style riding is GO!! GO NOW!! It’s that good. I know BC gets mosts of the coverage in all the magazines but Oakridge and all the same potential if they had the $$ and people to develop it properly.

I think there’s a very fine balance between having all the “necessities” you need in a mountain bike destination, and it being over developed. At the end of your comment, you yourself said that it could be as good as Whistler “if they had the $$ and the people to develop it properly.” But if it was developed like Whistler, Park City, etc. it WOULD be a super ritzy, over-developed area.

I personally think that part of the beauty of Oakridge is that it ISN’T developed and DOESN’T have “the people.” Personally I think, you do have the “necessities” : bike shop, place to stay or camp, place to buy food, and local beer. There’s nothing else you absolutely need.

For me, that’s perfect: it’s a perfect place to get away from it all, and to really enjoy the peace that the mountains bring. It’s not that my current hometown of Salida is super busy, but I personally just have a hard time really relaxing in a place where I have trouble finding a place to park my truck or I can’t afford to buy a burger and a beer.

That said, that’s not everyone’s idea of vacation. There are plenty of riders that like to shred on the trail and get back to their condo or resort room and feel pampered (Park City, anyone?). That isn’t bad, it’s just different 🙂

That’s me I guess although what I really need is a hot shower and preferably a jacuzzi when I’m done with my ride. I stayed at the Best Western in Oakridge while my friends camped outside of town. I had just finished camping on a Cog Wild trip before pulling into Oakridge and that re-confirmed why I don’t like camping. I’ll take a real bed and a roof over my head than you.

I don’t need or want a mega-build up like the village at Whistler but something like a Hurricane, Sedona or Fruita would be nice. Small-er but still has plenty of food & lodging options. What I meant as by money (and more people) is for some infrastructure in town and money to develop trails and post signage.

Haha! I grew up in a small Texas town where you could get a good off menu breakfast at the Dairy Queen. Spent the last two summers (and part of fall) riding many of the major and not so major trails through out Oregon. I love the blue collar aspect of Oakridge. Sacred ground in my book!