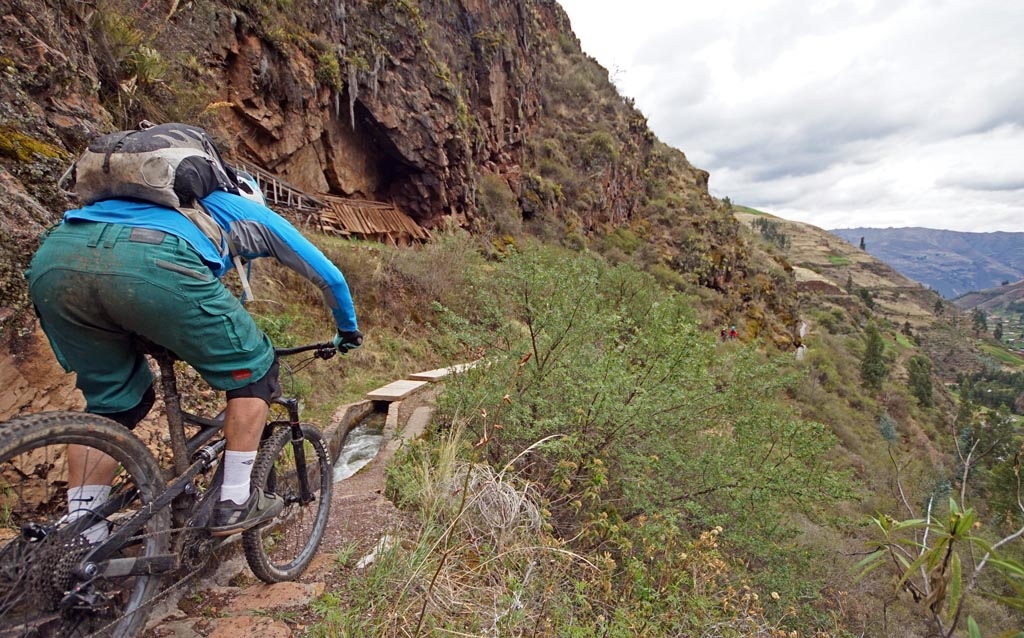 After landing in Cusco, the historic capital of the Inca Civilization, we drove an hour to the town of Urubamba in the heart of the Sacred Valley. The 100km valley was sculpted by the Urubamba river, with the Pisac village to the east and Machu Picchu to the west.

The Urubamba River flows at 2,000-3,000m above sea level among peaks rising up to almost 6,000m (19,685ft.). The slopes leading down to the river valley are used to cultivate maize, potatoes, coca, peppers, and pretty much anything else that can be grown. The land above 5,000m is filled with snowfields and glaciers whose snowmelt provides irrigation via Inca-built canals.

The Inca controlled this area from 1000-1500AD. It was during this time that many trails and waterways were built. The Inca stamp is everywhere; the Sacred Valley is truly a living museum where archaeological artifacts are in abundance and incorporated into everyday life. Even before Machu Picchu was designated a UNESCO Site in 1983, and later chosen as one of the new 7 Wonders of the World in 2007, the Sacred Valley was well-known. While Machu Picchu is the most renowned Inca ruin, this area is scattered with archaeological sites. There are so many ruins that some aren’t even marked, remaining buried beneath the forests.

During this part of our trip to Peru, we completed a few rides, including: PataLares in the Patacancha highlands, the Lares descent, and laps in the valley of Lamay.

PataLares is the name given by Hans to the rides we completed through the puna grasslands in the Patacancha highlands. The PataLares rides descend valleys via the north side of Pumawank’a from the Chalhua Cocha pass. Along this route we got amazing views of Sahuaisiray and Sirijuani.

For one of the PataLares rides, we rode parts of the Wakawasi trail to the village of Lares, ducking onto the road partway through as a member of our party was feeling altitude sickness.

On another ride, we took the Patacancha trail, which starts at 4,100m at the pass, and has some pedally and climby bits. This trail is not a particularly good choice for those who are not acclimatized to the altitude because the trail tends to hang out up high for a while before eventually taking riders to lower elevations where oxygen is more plentiful.

If the Patacancha trail is a stretch, the descent from Lares is a good way to acclimatize. Sometimes completed as a two or three day trek, it’s easily done in half a day on a bike.

The insane paved road from Lares past Pampascorral and Morras offers Sahuaisiray glacier views. Riders can marvel at how the glacier has carved up the mountain and the valley. The final pass at Abra Lares is flanked by Chhullunkunayuq and an un-named peak, and is almost always cold and windy.

On a clear day riders will be reminded that in the southern hemisphere the north faces get the most sun while south faces are often in the shade. The north faces of the mountains in this area are impressive, but the south faces are even more mind-blowing with overhanging seracs and glaciation. We descended via Lares to Tortora, finishing at Machacancha. The descent itself is from 4,460m at Abra Lares to 3100m via Parcco, and then to the town of Calca at the bottom of the Sacred Valley.

After the Lares descent we rode two sections in the valley of Lamay just a short distance east of Calca. The first lap was a 715m descent over 7km starting from the village of Bisminay at 4,200m and ending at the Sapacto trailhead below. We quickly realized big, steep descents are fairly commonplace in Peru.

For our second lap we rode a 1,000m descent over 9km, ending at Lamay (elevation 3,000m). Watch out for villagers at Huama who have gated the road and may want bribes to lift the gate.

Shuttle laps took about one to two hours each. We did two or three runs, and riders could easily complete more by limiting photo and video stops. 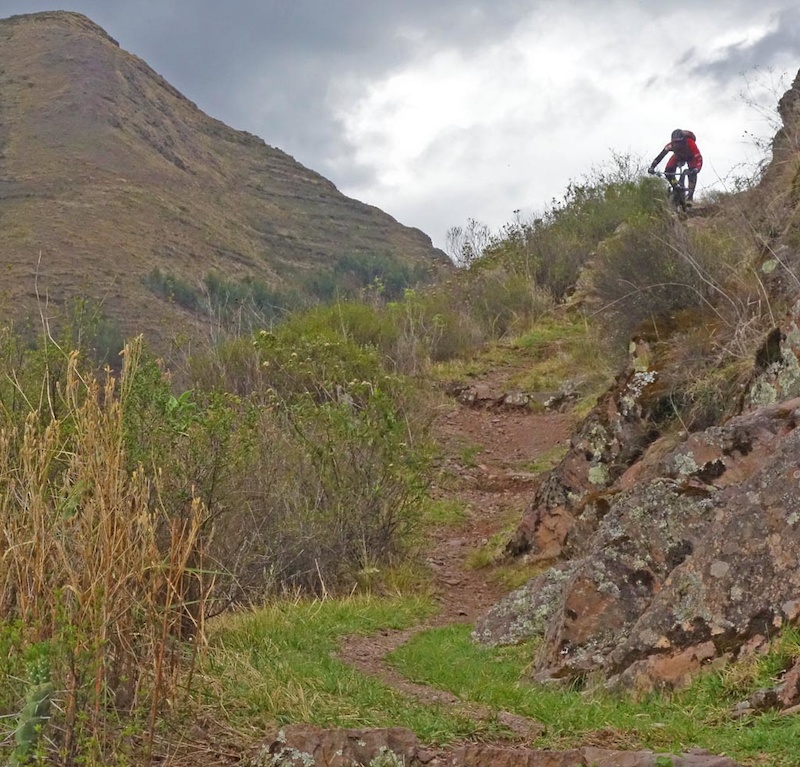 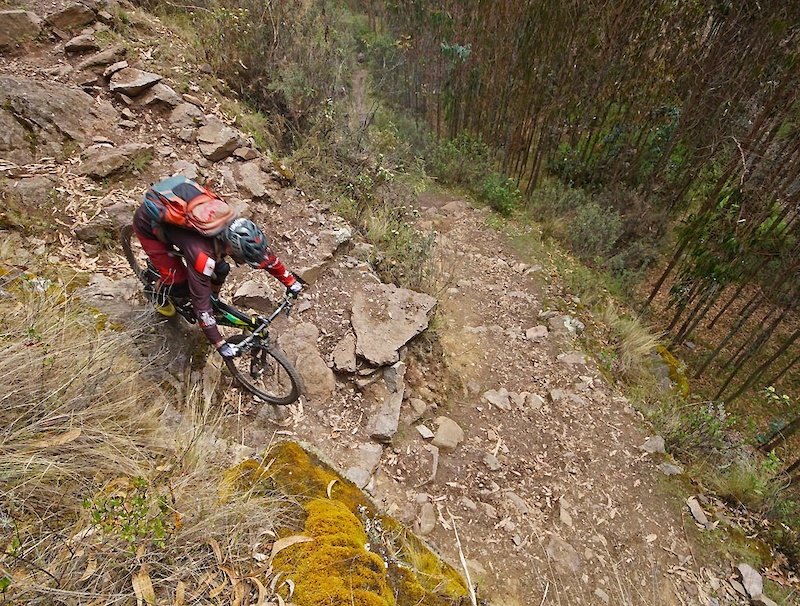 It turns out that mountain biking is a great way to see many ancient ruins off the beaten track. The trails we rode were primarily Inca trails, still used by the Quecha and other locals, taking us by many Inca ruins, local farms, and communities. The trails are technical so a burly bike is a good choice for riding here.

Daytime temperatures in the Sacred Valley are consistent all year at around 15-20° C (59-68° F), making it conducive for agriculture and mountain biking! At higher elevations and at night, temperatures can drop dramatically, so dress accordingly!

While the temperature stays fairly consistent, precipitation varies seasonally. We visited in November, which is the start of the rainy season. It rained during the nights, but fortunately we never rode in the rain. Since the area is generally dry, this meant the trails were quite tacky during our visit.

Beyond the rides described above, there are many more potential trails to ride in the Sacred Valley. These trails are shared by the communities who use these areas for their livestock and fields. By riding with Holy Trails MTB, we were assured we were on trails that would cause minimal issues with the local communities, and ensured that the trails were suitable for mountain bikes.

In all, we rode in 6 areas in the Sacred Valley: Laras, Lamay, Moray/Maras, Huchuy Qosqo, Racchi, and Urquillos. The Racchi and Urquillos rides were developed by Holy Trails MTB, and out of respect for and consideration of the local communities, we agreed not to publicize these rides.

Lodging in the Sacred Valley

While in Urubamba we stayed at the well-appointed Villa Urubamba. Like most hotels in Urubamba, this one is located just off the main highway, which means the surroundings don’t look like much. But inside the hotel compound the grounds and accommodations are quite nice, with a well-tended garden. Rooms are commodious and the views of the mountain chains rising 1.5 vertical kilometers above the Sacred Valley to the Peruvian Andes are suitably breath-taking.

There’s a large Yurt in which to stretch, and like most hotels in Peru, breakfast is included. The customer service is also excellent. During our stay, we hiked the Inca Trail to Machu Picchu, and were able to leave our bikes and gear safely at the hotel. 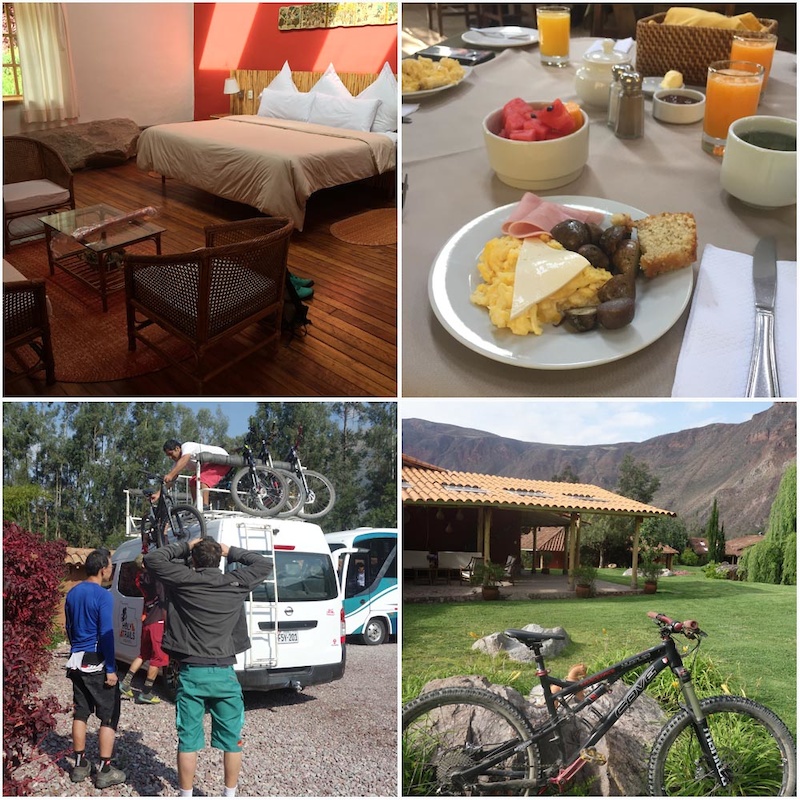 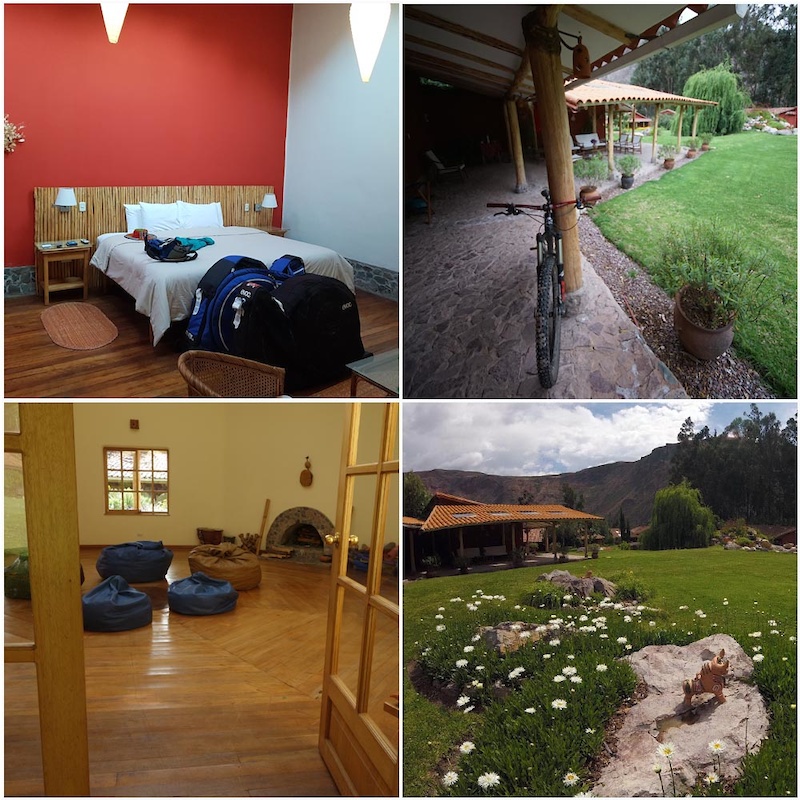 Box lunches and water were provided by our tour guides from Holy Trails.

We were on our own for dinner to explore the culinary delights of Urubamba. Peruvians really enjoy cooking and their passion for food is evident. A 4 Sol ($1.25) ride by mototaxito to the Urubamba town centre and bustling mercado offers plenty of places to eat along the way.

For more travel recommendations, read an extended description of this trip here and here.

This is part 2 in a series about mountain biking in Peru. Click here to get caught up with part 1.