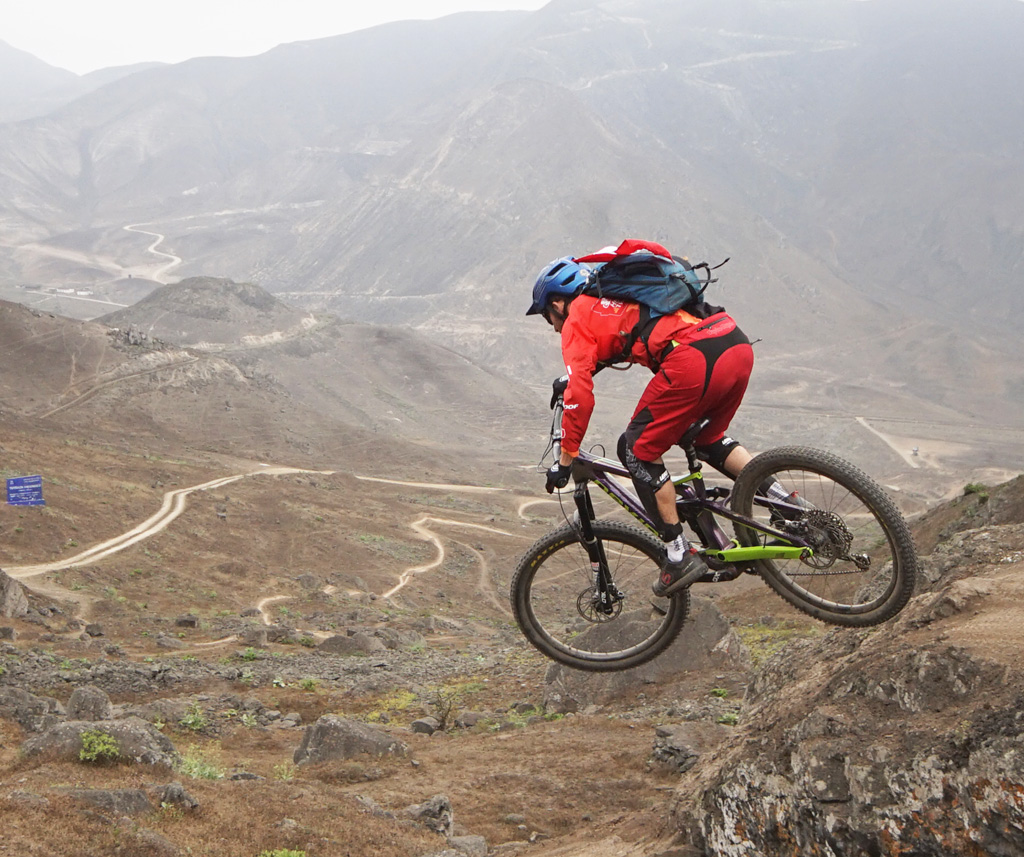 Peru is a geographically and culturally diverse country. And it’s huge: at 1.28M km2, Peru is the 20th largest country in the world–the size of California, Oregon, and Washington combined–yet has a population of only 32M people, most of whom are concentrated on the coast.

Peru’s history is best described as “complicated” with it perhaps being best known as the home of the Inca (sometimes spelled Inka), the stonemasons of the ancient world. Peru has a rich history and culture that appears almost symbiotic with mountain biking. While no organized advocacy groups exist to build purpose-built bike trails in the country, there are many ancient Inca trails and paths throughout Peru. Even modern Peruvians utilize trails both for hiking and for commerce and travels.

In Lima and the Sacred Valley there are informal groups that share our biking addiction, and have worked hard to help to establish mountain bike trails that they wish to share. One such group is Holy Trails MTB, a local group of core riders and trailbuilders that is the brainchild of Diego Pacifico Sarmiento, who started the company in 2012. Diego has ridden in many places in the world and is a super-passionate trail builder and mountain biker. We rode with Diego and his friends on our trip, and they showed us a tremendously fun and unique Peruvian mountain biking experience.

Our first day in Peru was spent in Lima, building bikes, relaxing, and walking around town. In the afternoon we went for a short ride in a local riding area known as Morro Solar. This area has hosted the downhill race, Copa Downhill, which was one of the first official mountain bike races in Peru. Holy Trails does a lot of work building and maintaining the trails in the area, so the crew knows the tracks well. Morro Solar is very popular with the local Lima riders as a quick evening hit, but is located in a not-so-good part of town, so be careful with bikes and valuables if hanging around..

Morro Solar is one of those rare beasts: sanctioned downhill in the middle of a large urban area. In fact, Lima is the third largest city in the Americas, and more than 10M residents call the metro area home. Pablo Lavinas was our shuttle driver for the afternoon since he was out of commission due to a bike injury.

On the Morro Solar downhill track there is a memorial to Eguz, a 22-year-old fanatical mountain biker who was tragically killed in a minor crash here. Eguz had been injured quite badly in another crash, and shouldn’t have been biking that day, but no one could keep him off two wheels. 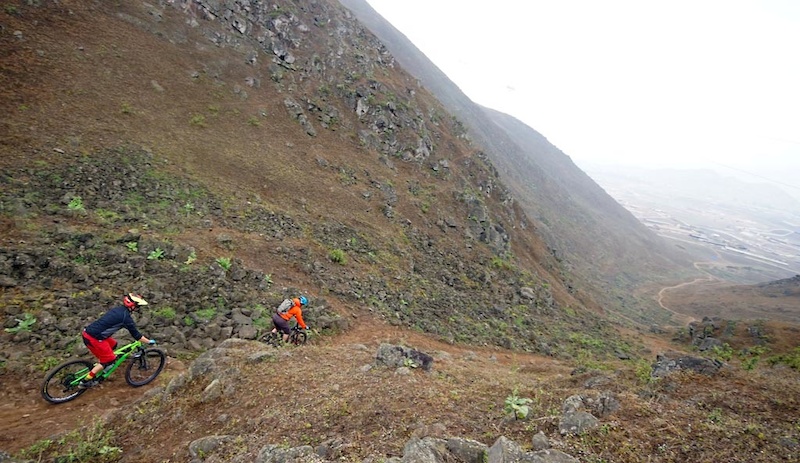 Our second day of riding in Peru was in the Pachacamac area located 45km from Lima. This is the site of a cement quarry where the owners allow mountain bikers to ride. There are multiple trails and routes to ride in Pachacamac, including a DH trail called Amancaes, and another known as “Terrorist.” It’s unusual to find such a well-developed, well-maintained, and dense collection of mountain bike trails located so close to an urban area.

The Pachacamac area is an amalgam of plant-owned industrial land laced with archaeological sites and artifacts. The slopes will eventually be ground into quarries, though hopefully the locals will be able to find a compromise so some trails can stay open to mountain biking.

Diego arranged a dedicated driver for us who knew every nook and cranny of Pachacamac, which greatly increased downhill time! Public access roads within the plant property can be used for shuttle access.

The trails we rode in Pachacamac were used by both shuttlers and riders who choose to pedal uphill. Even on the weekends when it’s “busiest,” there are so many trails in this suburb of Lima that it’s pretty easy for riders to get spread out.

We did four laps on the slopes around Pachacamac to the south side of the main cement mix plant, then biked another distinct area for a total of six laps. The shuttle turnaround time in the main Pachacamac area is about an hour. Each trail loses about 400m vertical so riders will get their fill of downhill at Pacha. 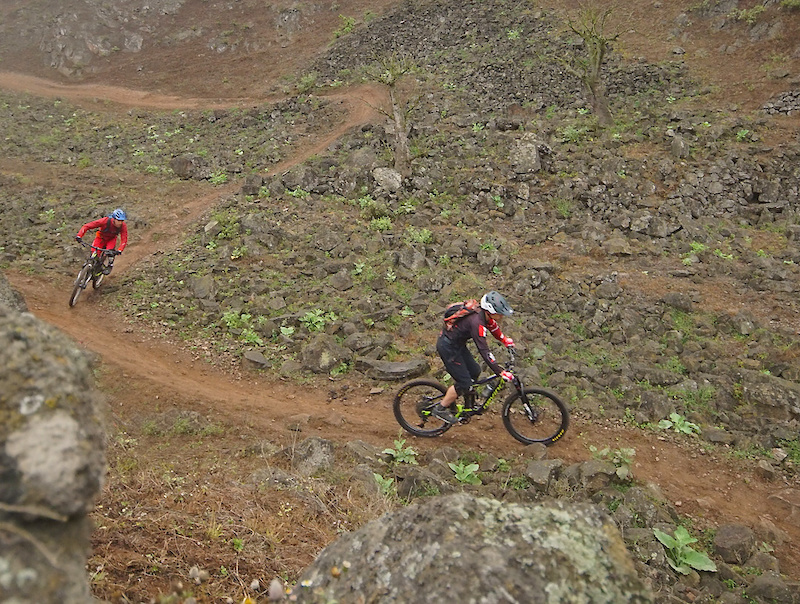 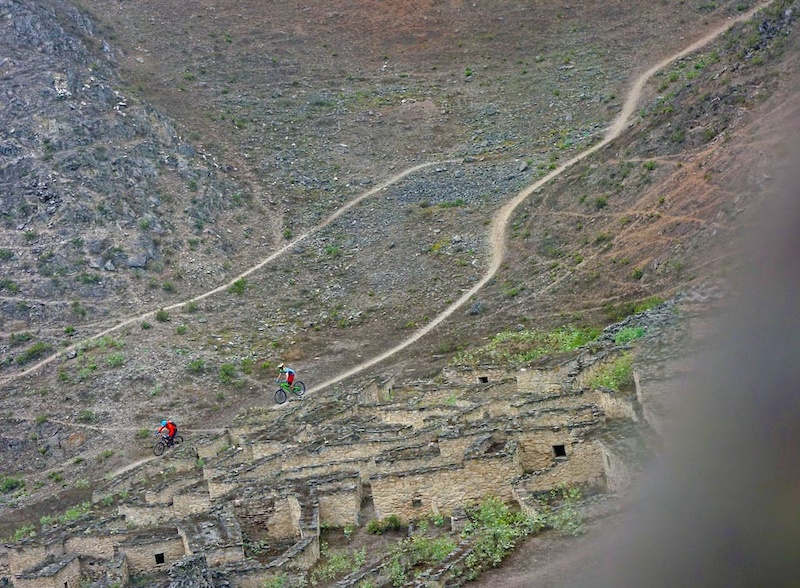 We also did a lap in the “Amancaes Bike Park” which really isn’t a bike park but a collection of purpose-built downhill trails developed in the early- to mid-2000s. The community of avid bikers has worked on and shaped the land, and riders will find tables, berms, jumps, and tech-gnar on drifty, fast, sandy soil. Bring your cornering A-Game!

Southeast of the main grouping of trails at Pachacamac is Cerro Parapente where powerlines feed into the city of Lima. There are also massive gullies and ridgelines on which to ride… and hide. We rode a trail in this area called Terrucos, or “Terrorist,” named for the Sendero Luminoso guerillas who hid here during their violent insurgency against the Peruvian government. Fortunately the guerillas are now jailed and gone. The only thing riders have to worry about is the fantastically loose dirt on the crazy fast downhill from Terrorista to the valley below. 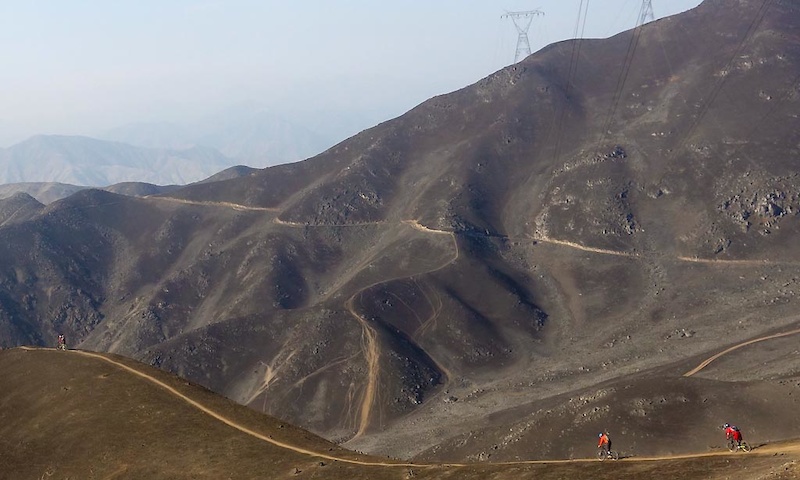 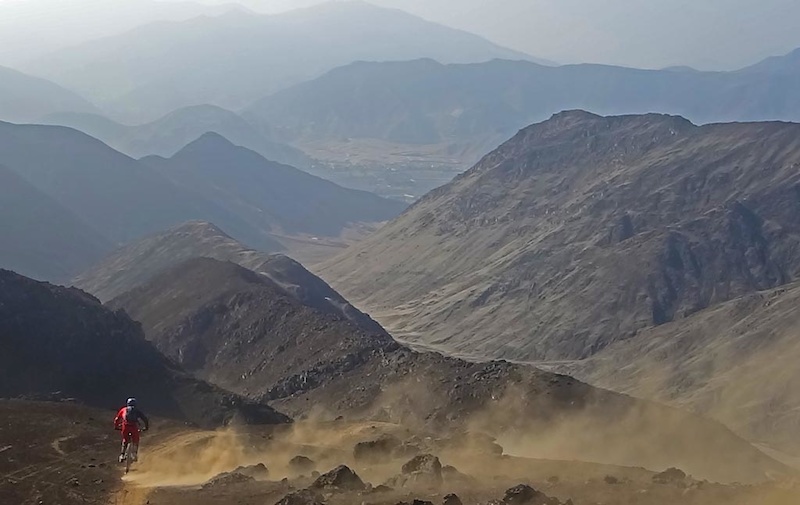 On our third day of mountain biking in the Lima area we rode the Classic Olleros descent. The full pull from the Sierra Andean foothills to Playa Negra at San Bartolo just south of Lima is a 50km, descending a total of 3,415m (11,200′). This classic trail can be divided into two parts. The top section drops from 3,423m to 1,200m for a total of 2,270m (7,500′) of descending in 18km on classic singletrack. The lower 28km section offers more XC-style riding. Once again, Diego and Coti of Holy Trails joined us, while Pablo Lavinas kindly drove shuttle. 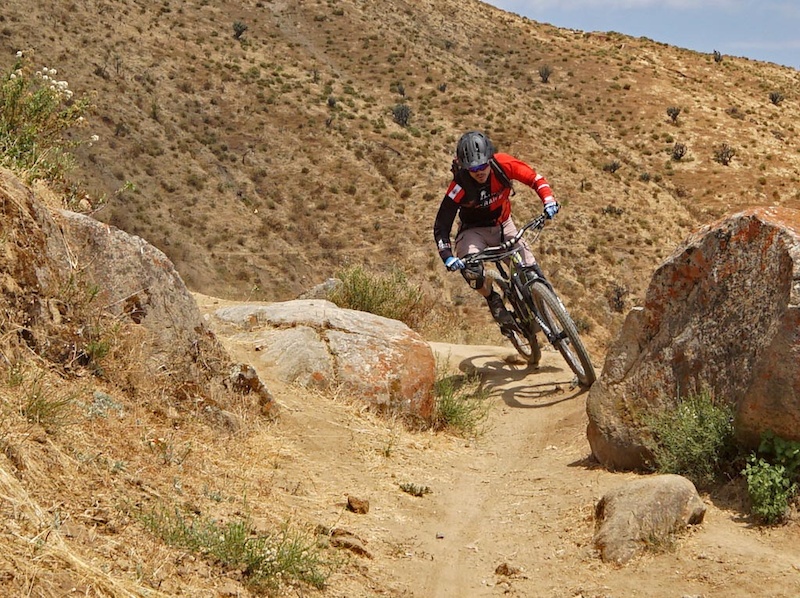 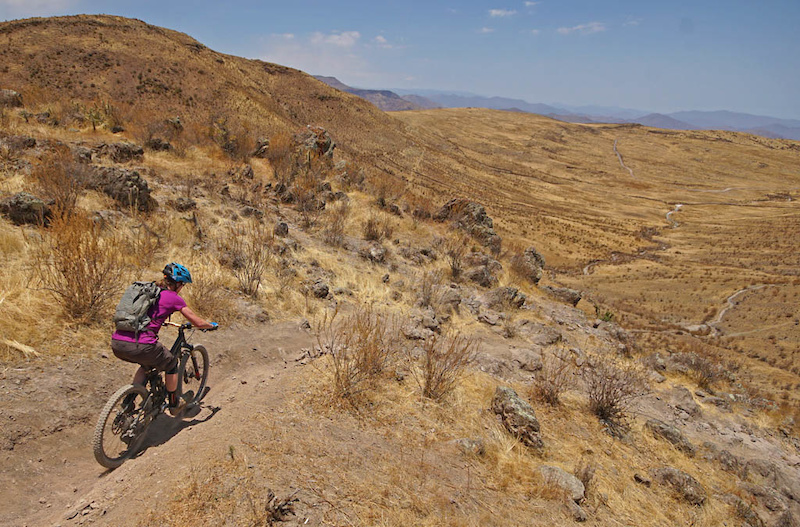 Olleros has to be ridden to be believed. The numbers only tell part of the story; the quality of the singletrack simply has to be experienced. The trail descends so much that the soil, vegetation, and climate changes dramatically throughout the ride. Perhaps one reason the trail conditions are so good is that the area is sparsely populated–only 2,800 people live in the district, with most living in the village of Olleros. The trail simply doesn’t get much wear-and-tear.

The Olleros ride involves a serious shuttle, and it would be a very long day to do this self-powered (looking at you Tito Tomasi). This trail starts about 140km from Lima, so it is a long day even with a ride to the top. While the terrain is dry like Pachacamac, this trail is a lot longer and has more technical sections, so bring tools and supplies for emergency mechanicals. There are many sections where the trail wanders far from the road, so Olleros is not for the unprepared. 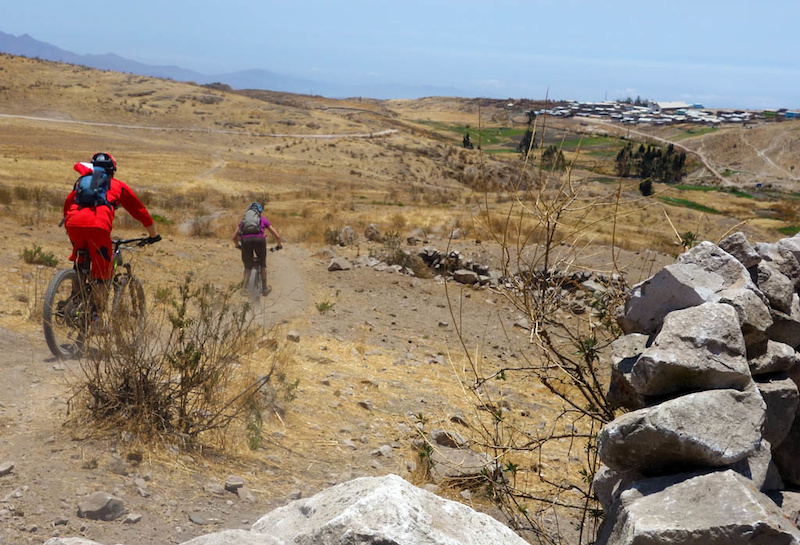 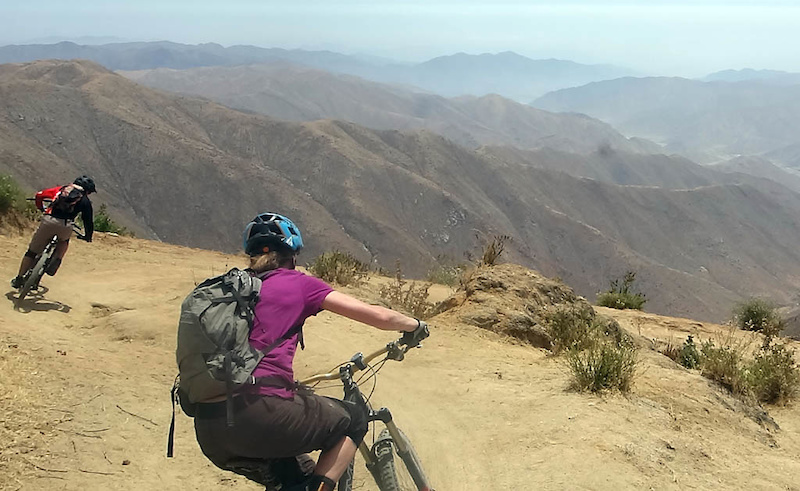 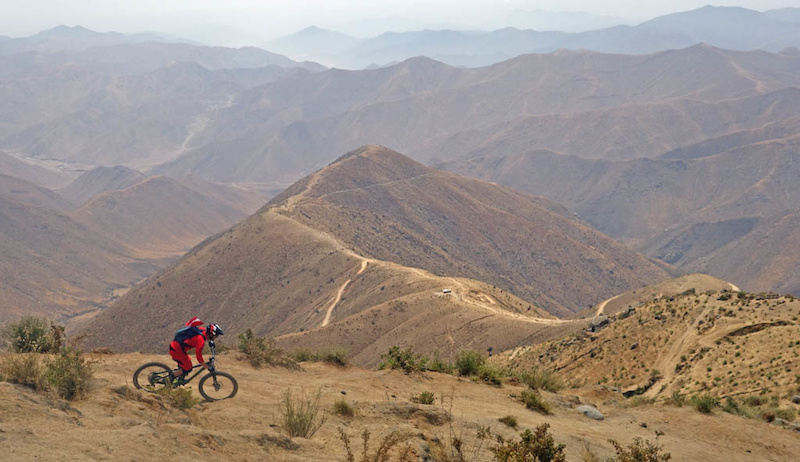 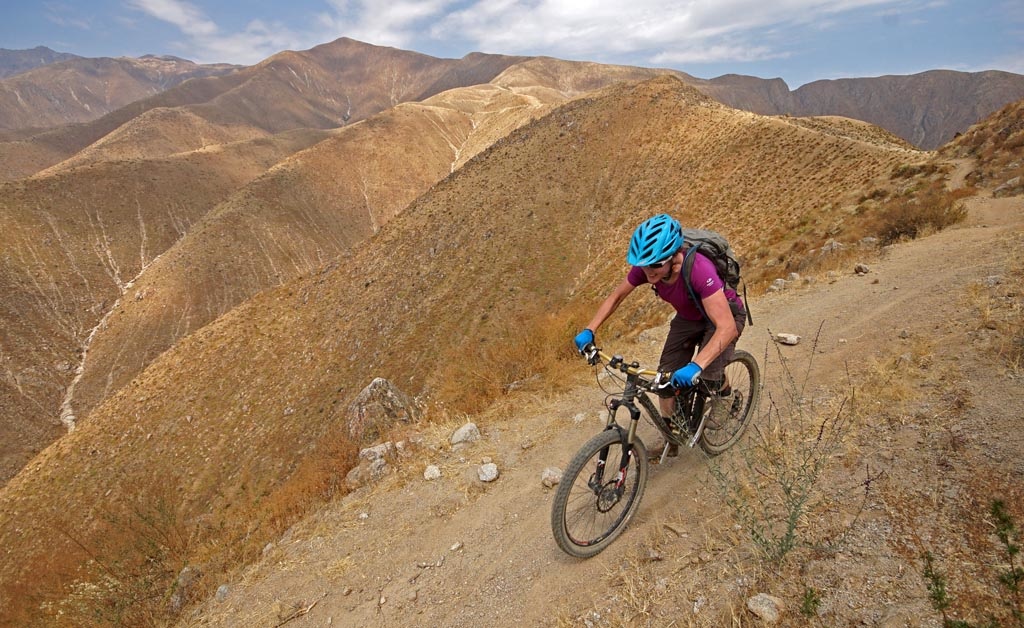 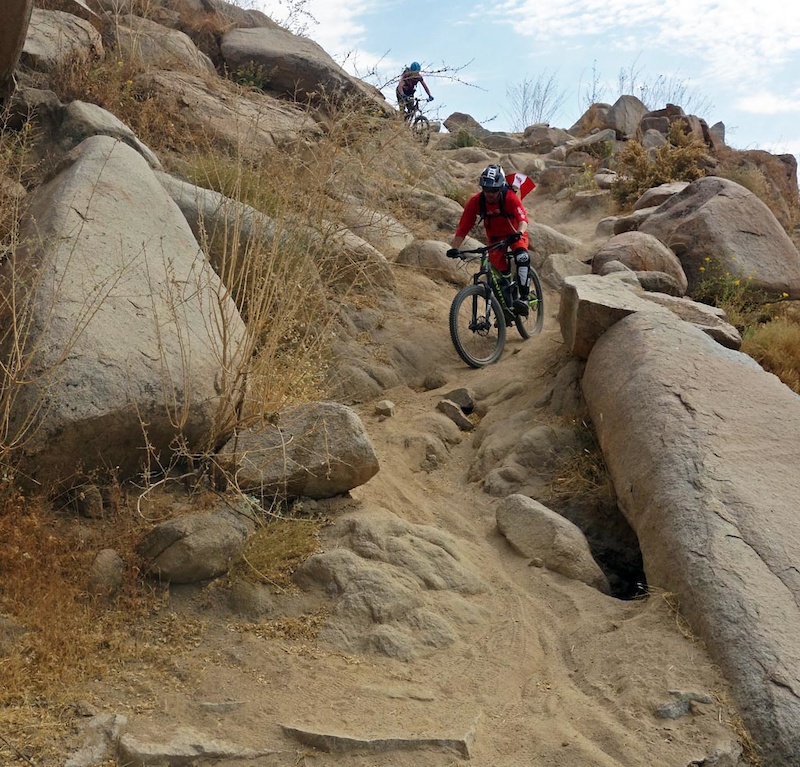 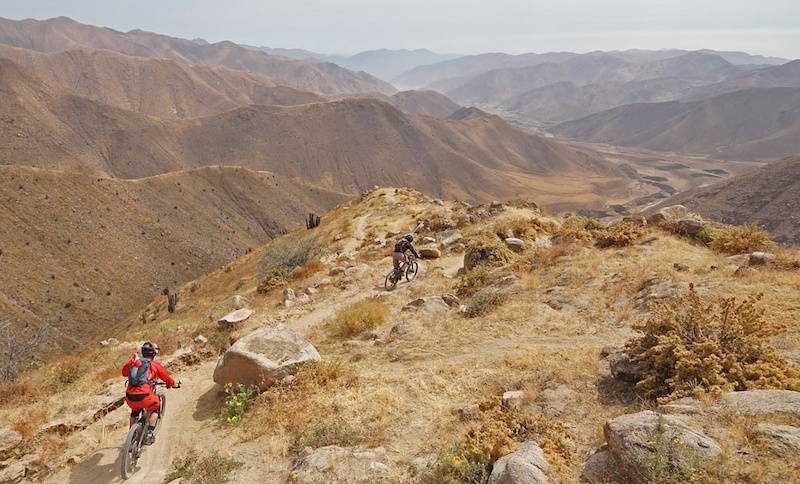 By the end of the DH section we have descended 2270m (7,500′) which is a full day in most places, but not Peru! At this point riders can choose to go up for another ride on the DH trail, or pedal 28km down the river valley to the ocean. We opted to head for the ocean.

The river valley is scenic and practically deserted with only the odd farm appearing in the far distance. There aren’t a lot of farms here because it doesn’t rain much on the Peruvian coastal lowlands, which are in the rain-shadow cast by the enormous Andean cordillera.

However, when it does rain, the storms can be torrential, resulting in mass flooding, which is why the riverbeds are empty. Unfortunately a lot of poorer areas (barrios) end up being built on these riverbeds close to the coast, which can result in mass losses in life and property in the event of flooding. It’s a sobering thought as we approach more populated areas near the end of our pedal to the Pacific. 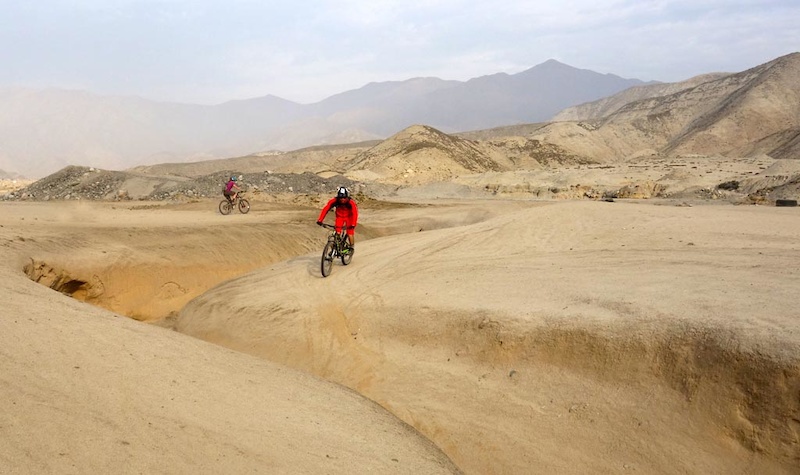 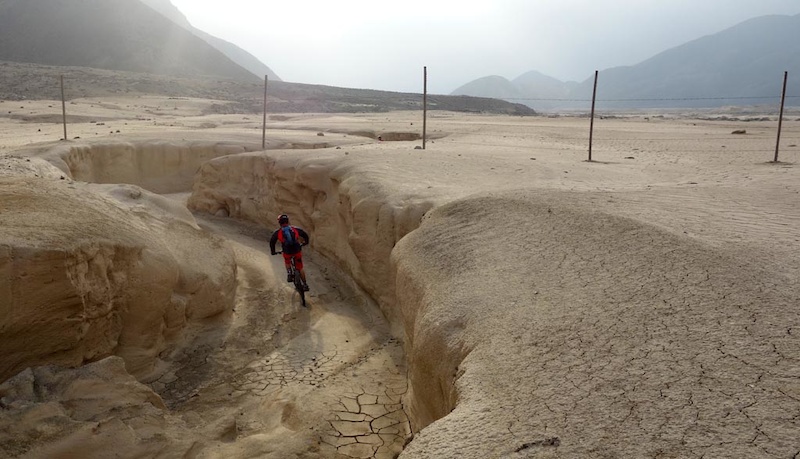 We stayed at NM Lima, a very nice hotel in Miraflores close to the center of town and near very good restaurants and stores. This is a yuppy neighbourhood by Lima standards, though perfect for us gringo travellers. The hotel offers a great breakfast, the rooms are spacious, but bike storage is haphazard. Fortunately we were able to keep our bikes in our spacious rooms. The rack rate is pretty pricey, but by staying there under the auspices of Holy Trails, we received a heavily discounted rate which is bundled with the trip.

This is part 1 in a series about mountain biking in Peru. Stay tuned for part 2 next week!