When the singletracks editors asked each ofus to come up with our five favorite mountain bike trails in our respective areas, I was stoked to start writing. Then I realized I had to pick just five trails. Singletracks lists a couple hundred trails in the Denver “Front Range” area. Picking a mere five is just … wrong. 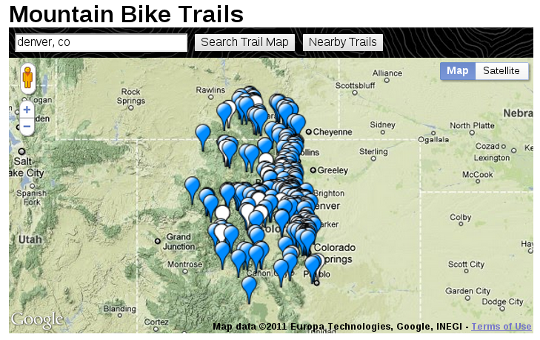 5. Buffalo Creek – Pine, CO
Buffalo Creek is the number one rated trail on Singletracks.com. While I’m not convinced that lofty status is completely deserved, it certainly is a great ride. Located fairly close to the Denver Metro area, it’s also far enough away to not be as crowded as some of the rides closer to town. It’s a mix of fire road, twisty singletrack and some moderately technical stuff. There is climbing, but it is spread out over enough miles to make it easy to find a rhythm and crank it out.

Buffalo Creek offers several loop options that can be connected in different ways to make each visit a little different. It is perfect for beginners to get that first “epic” ride under their belts, but seasoned XC riders will have plenty to grin about too. There is even a double black diamond section beingconstructedto give the gravity crowdsomethingto do. 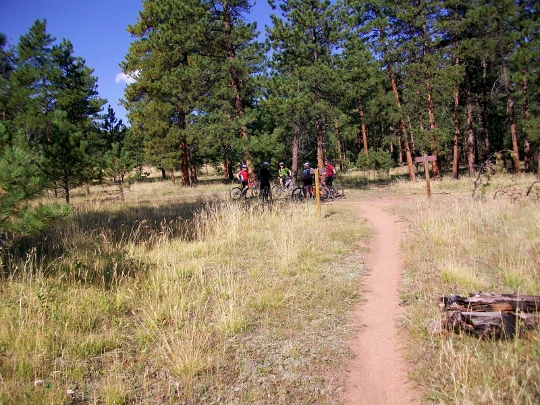 4. White Ranch – Golden, CO
White Ranch is a network of trails that includes some doubletrack and lots of singletrack. Decent sun exposure makes for generally dry trail conditions. A popular route is to go up the left side, which is doubletrack and then come down the singletrack. There are also several singletrack cutoff trails that traverse the mountain and connect the sides of the larger loop. White Ranch also features some challenging sections, including the sandy rock garden near the parking lot. Intermediate riders can push themselves and advanced riders can find lots of stuff to play on. It can even be done as a shuttle ride by leaving a car at the bottom parking lot and then driving to the parking lot at the top, but you reallyshould earn all that downhill with some steep, technical climbing. 😀

3. Red Rocks / Dakota Ridge – Denver, CO
Ask 10 Denver mountain bikers to name the first trail that comes to mind and I’ll wager seven of them will say Dakota Ridge. It is typically ridden as a loop with Dakota Ridge, Matthews Winters and Red Rocks bringing you back to where you parked. The Dakota side climbs straight up a “hog’s back” and then traverses some crazy technical rocks. The descent at the other end is just as abrupt as the climb was. After crossing the paved road, Matthews Winters starts out as hard pack and gradually gives way to small ledges and babyheads, all with very little climbing. Next, drop through a huge notch in the sandstone, and the fast singletrack of Red Rocks trail returns you to the trailhead. A variation is to add Morrison Slide which splits off from Matthews and reconnects with Red Rocks after climbing over the top of the mesa. 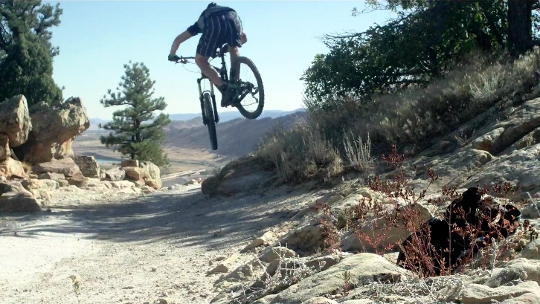 Photo by (and of) Grant Landsbach

Like most trails in the Denver Metro area, Bergen Peak involves a fairly steep climb, a nice view while you catch your breath, then fast, grin inducing singletrack all the way back to the parking lot. This trail seems to strike a nice balance between climbing and descending. Most people who have ridden it will attest that it feels like there is more downhill than you climbed on the way in. It is listed as black diamond here on the site, but if you’re an intermediate rider or even a beginner with decent endurance, you will still enjoy the ride. 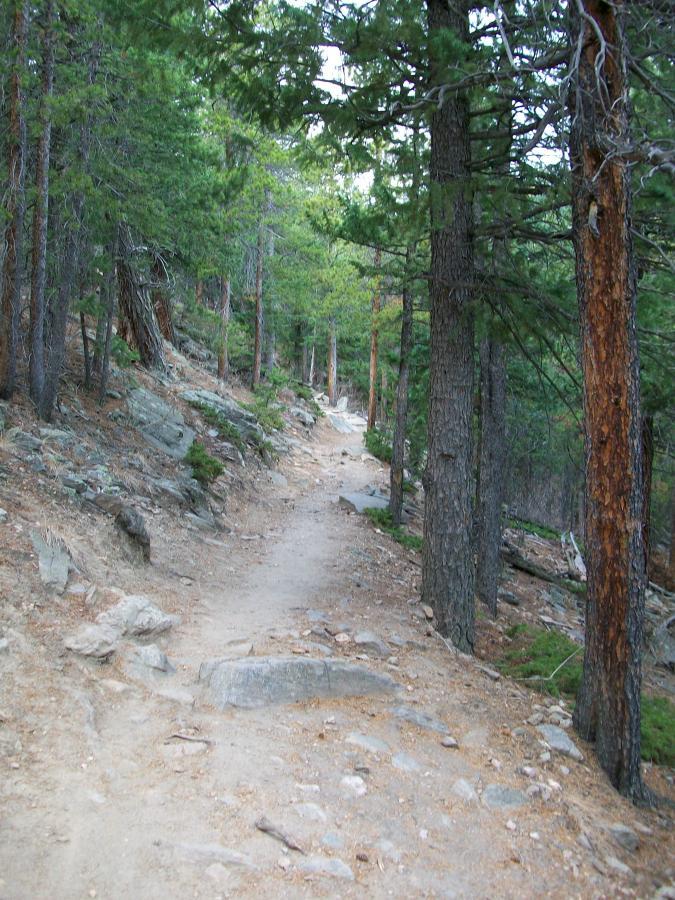 1. Apex – Golden, CO
Apex starts out with a rocky singletrack climb that connects to a figure eight. The right hand side of the eight is a hard pack climb up and over the hill with a series of switchbacks coming back down. The left side is called Enchanted Forest and is one of the most fun descents of any Denver area trail.

While Apex is a great trail system and a lot of fun to ride, many will argue that it is notnecessarilythe best trail in the Denver area. The reason I listed it at number one is because it is the trail that we have come the closest to losing access to. It is enormously popular with bikers, runners, hikers and equestrian users. In 2009 the latter two groups spearheaded an effort to severely limit the biking experience at Apex and they lobbied the county commissioners heavily to that end. Colorado Mountain Bike Association (COMBA)gotthe word out and hundreds of mountain bikers respectfully made their voices heard. The upshot was the county was obliged to do more trail use studies, and although the current compromises are still skewed slightly in favor of the smallest user group who contributes the least in terms of money and volunteer hours, the trail was not closed to bikers, and we are still allowed to descend Enchanted Forest, albeit on even days only. 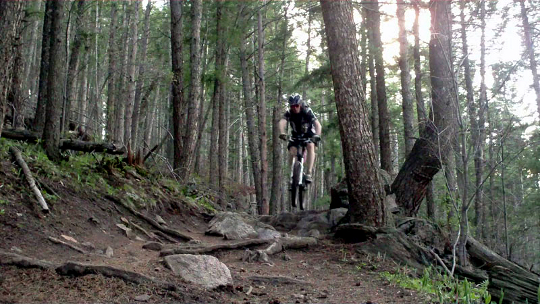 Honorable Mentions:
As I mentioned at the beginning of the article, it’s tough to pick just five great Denver area trails so here are my honorable mentions: Lair o’ the Bear, Deer Creek and Mt Falcon. Check them out in the Mountain Bike Trails section of the site.

Great list. As an XC guy I love the fast, flowy stuff so Buff Creek tops my list.

I also enjoy riding the canyons, Waterton and Deer Creek. Dakota Ridge, while a technical beast, is one of those trails everyone has to ride (or walk!) at least once.

I haven’t ridden Bergen yet but it’s definitely on my list now!

Maddslacker, I visit Colorado a couple times a year. I remember a while back on the visitors web site for Denver there was a great panoramic picture of some mountain bikers on a ridge that had great views overlooking the downtown denver skyline to the east and I’m sure spectacular views to the east as well. Do you know what trail that may be?? Or, was it a bit of photoshop magic by the visitors website?

There are several trails with a view like that. The most likely candidate to fit what you describe would be Green Mountain.

I need to move to Denver

Great timing on the article. I am looking at possibly making a trip out there this June, and when I looked at all the trail options (just yesterday) I was pretty ovewhelmed. Any thoughts on the best trail for a hardtail?

I have ridden them all with both a hardtail and full suspension, and my friend rides them on a rigid 29’er (single speed)

I guess it depends on how resilient your backside is!

If forced to say “ride this one” with a hardtail, I would say that you would have a lot of fun at Buffalo Creek.

Not bad picks but I really would not put APEX as the number 1 ride. To many hikers and too much conflict with them, hence the certain directions on certain days. I would put Buffalo Creek number 1, I absolutely fell in love with this ride last year and cannot wait to get back up there all spring, summer, and fall long. I would have to add Deer Creek to that list also, good hard technical ride close to town. When Waterton Canyon opens back up that would make the list also, do not like the 6 mile fire road ride to get to the single track but well worth the time and effort. I need to get back to White Ranch it has been too long.

If ya’ gotta go with just 5, this is a pretty good list. Each trail has its plusses and minuses, but you can’t argue with these 5. Honorable mention goes to Centennial Cone (perfect for the XC types and killer scenery to boot) and Deer Creek Canyon (easily accessible yet very mountainous, killer climb including the “Wall of Shame.”

These are all great trails. Dakota Ridge is awesome and Apex has some great terrain. Keeping trails open is so important and having the general public informed about mountain biking and our contributions is vital to educating non mountain bikers.

All great trails, though the one you left out, while not being technical, is great because you don’t see a lot of hikers. I’m talking about Centennial Cone. Great singletrack and during the week when I ride, mostly mountain bikers. I know the weekend is alternating, but I wonder how many hikers get past the overlook( if you come from the north parking lot) or past the climb on Mayhem Gulch. I rarely run into people who aren’t on 2 wheels.

Buffalo Creek may move up your list now that Blackjack and Raspberry Ridge trails are now open(“double black diamond”). Although I haven’t ridden them yet I’ve heard comparisons made to Amasa Back in Moab, but I find that a little hard to believe. Love to see a write up on the new trails though, sounds like COMBA has done a great job.

Yeah, I can’t wait to check out the new trails there.