The main goal of my California trip this past summer was to find legal trails that weren’t in the Singletracks trails database, ride them, map them, shoot photos, and upload all that information to help make the best mountain bike trail resource on the internet just that much better.

Here are two excellent SoCal trails I had the opportunity to ride that were not yet listed on Singletracks. 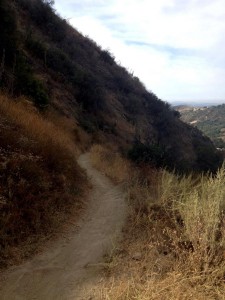 If the wear on the trail is any indication, the Luge has been a very popular trail for a very long time! Strava confirms its popularity: the Luge is literally covered in segments, with the main leaderboards boasting 1500+ Strava users who have ridden this trail.

The route begins by heading up the old fire road that, as a result of the encroaching plant life, has turned into a rocky singletrack climb along the ridge. Buckle down and get ready to grind, as there’s about 3-4 miles of climbing in front of you.

Keeping with the Wild West nature of Los Angeles riding, the only marker for the turn off to the Luge descent is an American flag sitting high on the knob. Hang a right and prepare to descend!

The main Luge Trail is a bomber descent that is true to its namesake: big berms and a trench-like disposition hold you onto the trail, allowing you open it up and let ‘er rip down the mountain! As of my ride in July the trail was pretty rough in places, with some rocks and tons of braking bumps going into the corners, but still, the best word to describe it is flowy. Many of the trails I’d ridden in SoCal to this point had been anything but flowy, but the Luge lets you flow like water down the mountain. 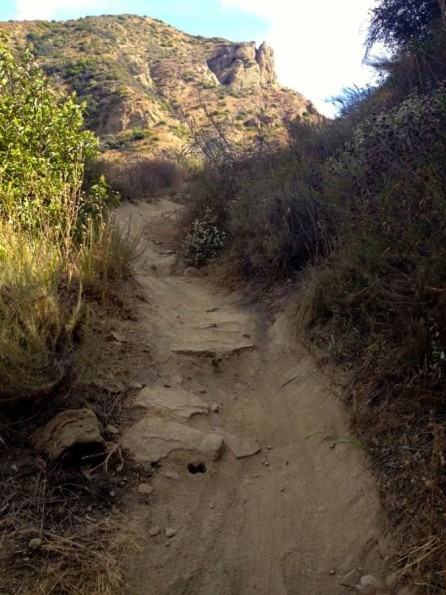 Looking back up The Luge.

The 7.7 mile loop unfortunately finishes on pavement, but that’s a small price to pay for such a fun descent!

Despite the long name, Limestone Canyon and Whiting Ranch Wilderness Park is one massive open space area that is seamlessly integrated with an interconnected trail system. Commonly referred to as just “Whiting Ranch,” not only does the network of gated fire roads and singletrack span both parks, but it also connects to greenways and other trails that branch out into the surrounding communities, allowing many local riders to access these challenging hills from the convenience of their own homes.

I didn’t do this myself, but based on the OpenCycle maps you can probably connect this trail to The Luge and beyond for one massive all-day epic right here in the Orange County suburbs. Thanks to the networked format, you can easily create as long or as short of a ride as you desire. 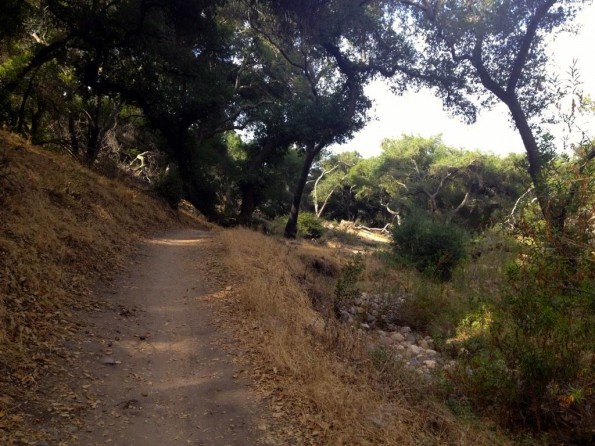 In general, there are a variety of different trails here ranging from wide, gated fire roads to bike-optimized singletrack. As with many other rides in SoCal, expect to spend some time climbing up to the top of the hills on the fire roads, then turning around to bomb down the chunky singletrack! Many of the singletrack trails in Whiting feature perfectly-bermed turns to hold you on the trail, allowing you to really shred the descents! While flowy, the trails are also pretty chunky in spots and will be sure to put your suspension to work.

One word of caution: if you see signs at Whiting Ranch saying a trail is closed due to mountain lion sightings, take them seriously. The trail I had initially planned on climbing had this sign posted at the bottom of it: 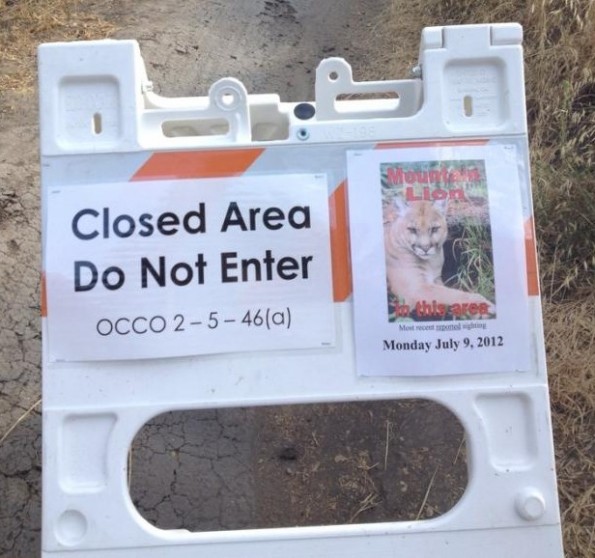 It was July 11th at the time, so the mountain lion sighting had been only two days prior. As I was standing there reading the sign, another rider came down the trail, whizzing right by the sign. “Hmm,” I thought, “it doesn’t seem the locals are really deterred.” Still, I decided to forgo the closed trail and instead climbed a gravel road.

However, during my descent back down the mountain on singletrack, I ended up on the other end of this trail segment staring at another warning sign. After consulting my map, I realized I could either descend a boring dirt road or ignore the warning and bomb down the sweet singletrack. Since the other guy had ridden it without getting mauled, I decided to go for it. My heart was pumping a little bit faster than normal during the descent, but at the time I thought it was so worth it: the singletrack was oh-so-sweet!

A couple of days later my wife and I were at Montrose Bike Shop in La Canada chatting with some of the guys there, and somehow our conversation got onto wildlife that we’d seen during our trip. I mentioned the sign in Whiting Ranch, and the owner of the shop proceeded to tell us about a friend of his who had stopped to relieve himself at Whiting Ranch and had gotten attacked from behind, mauled, and killed by a mountain lion. The guy relating the tale wasn’t pulling our legs, either: we could hear the pain in his voice as he reminisced about his late friend.

The moral of the story: if there’s a trail that’s closed due to a mountain lion sighting, it’s probably closed for a reason!

While I had the opportunity to ride some awesome SoCal trails that weren’t in our database yet, I didn’t hit nearly all of them. Do you know of a great, legal mountain bike trail that we don’t have listed yet? Please be sure to add it to our database to help us improve this resource! Just run a quick search beforehand to make double-sure it isn’t listed already.

Community
Rooted Vermont: Business Up Front, Party in the Back—And All...
Gear
Get Away from It All with These Bikepacking Picks
Gear
Bontrager Foray Shoes are a Versatile and Stiff All-Rounder
Progression
MTB Coach Shares How to Time Mountain Bike Jumps and...
Subscribe
Login
Please login to comment
10 Comments
Most Voted
Newest Oldest
Inline Feedbacks
View all comments

You need to come to Norcal and check out some of our trails up here!

The “gravel road” to the top of the Luge is gated and is now almost more of a singletrack than it is a road. As for the paved section, it’s only a couple miles long, so not really worth shuttling.

What do you define as “Norcal?” Did a bunch of riding in the Marin County, San Francisco, Downieville, and Lake Tahoe areas this summer as well.

That would all be Norcal. The SF Bay area, to Tahoe and north generally. Lots of great riding around here. Did you do a writeup on Downieville or Tahoe? Great areas to ride!!!

OK cool, wasn’t totally sure. Check out these blog posts:

That 4th picture of the Luge looks waaaay fun! Reminds me of The Chutes, here in Colorado Springs.

I’m glad they don’t close trails around here every time there’s a evidence of a big cat–we’d never get to ride! Of course, knowing they’re there makes our night rides a little sporty . . . especially when riding solo!

Did you see the pictures of the cougar they found dead last summer by the reservoirs in Stratton, right near the bottom of the Chutes? It was pretty huge and there was speculation that it was killed by an even bigger one! I’ve seen my share of bears in there but I’ve never seen a cougar yet. It definitely adds a little spice the ride!

Not sure if I saw that one. I live between Stratton and Bear Creek Regional and hit all those trails all the time. Within a week of moving into the neighborhood, I saw a big cat on the neighbor’s lawn a block from home just at nightfall. I grew up in the mountains and never saw one through all those years, but within a week of moving into the city I saw one! There’s lots of pet disapperances in the neighborhood and I know why.

Every little rustle I hear on a night ride jerks my head around and it’s never more than a squirrel or bird. There’s no reason to react as such because the thing is, if it is a cougar, you’ve been taken down before you hear anything. Stealth, baby.

I’ve heard that every time you venture into the mountains in the Boulder area, a mountain lion sees you… but about 99% of the time, you don’t see them!

One can only assume that between 1910-1985 (76 years with no known attacks) we hadn’t really started encroaching on their territory and from the 80s onward we began to see the massive rise in home building in the surrounding hills…
Always be aware of your surroundings!

I have another theory as well. My nieghboorhood is late ’60s vintage and there were no sightings for many years, now they’re quite common. Around here, the cats are actually getting more comfortable with our presence and encroaching on our domain. How’s that for irony? It also helps that there are lots of deer that live in our suburban area 24/7–they don’t wander in from the open space once in a while; they are full-time residents.

Whiting Ranch is an awesome place to ride. I recommend cow trail and live oak to the riders who love downhill smooth trails and love to go fast. If you like to challenge yourself there are tons of extra credit trails along the way towards the big mountain trail mustard. I have been riding in whiting for about 5 years now and the luge for about 3. These are two of the best places to ride in SoCal.