I’ve lived in Georgia off and on for most of my life and I’ve been mountain biking here since the early 1990s. It’s an understatement to say that over the past 25 years I’ve seen a ton of new trail developments across the state, but the interesting thing is that the classic rides–Bull Mountain, Bear Creek–are still some of the most enjoyably-demanding rides in the state. The Mountaintown Creek trail is another one of those rides that’s been around forever, but before the Singletracks Brutal Loop ride last month, it was a ride I had never attempted before.

I grew up poring over Jim Parham’s indispensable guide to mountain biking in Georgia, Off the Beaten Track Volume III, which was first published in 1993. I still have my copy, ragged and tattered from all those years ago, and in it, Jim describes Mountaintown Creek as “one of the most remote rides in North Georgia … dropping down into the Mountaintown Creek Gorge with its many cascades and waterfalls.” The singletrack Mountaintown Creek trail itself is only about 7 miles long, and to ride this slice of goodness you’ll need to ride a nearly 20-mile loop, mostly on gravel roads. This area is indeed still remote and unfortunately, ongoing land access issues prevent connecting Mountaintown Creek to the popular Bear Creek trail just across the ridge.

Because Mountaintown Creek is such a remote and frankly difficult ride, it doesn’t see a lot of use during the year. Ahead of our ride, “Big Ben” from Cartecay Bike Shop in Ellijay cleared several down trees, but during the rest of the year it’s not uncommon to have multiple trees down along the way. And with 21 stream crossings, each wider and faster than the one before it, this isn’t a ride to do in the winter if you’re set on keeping your feet dry. 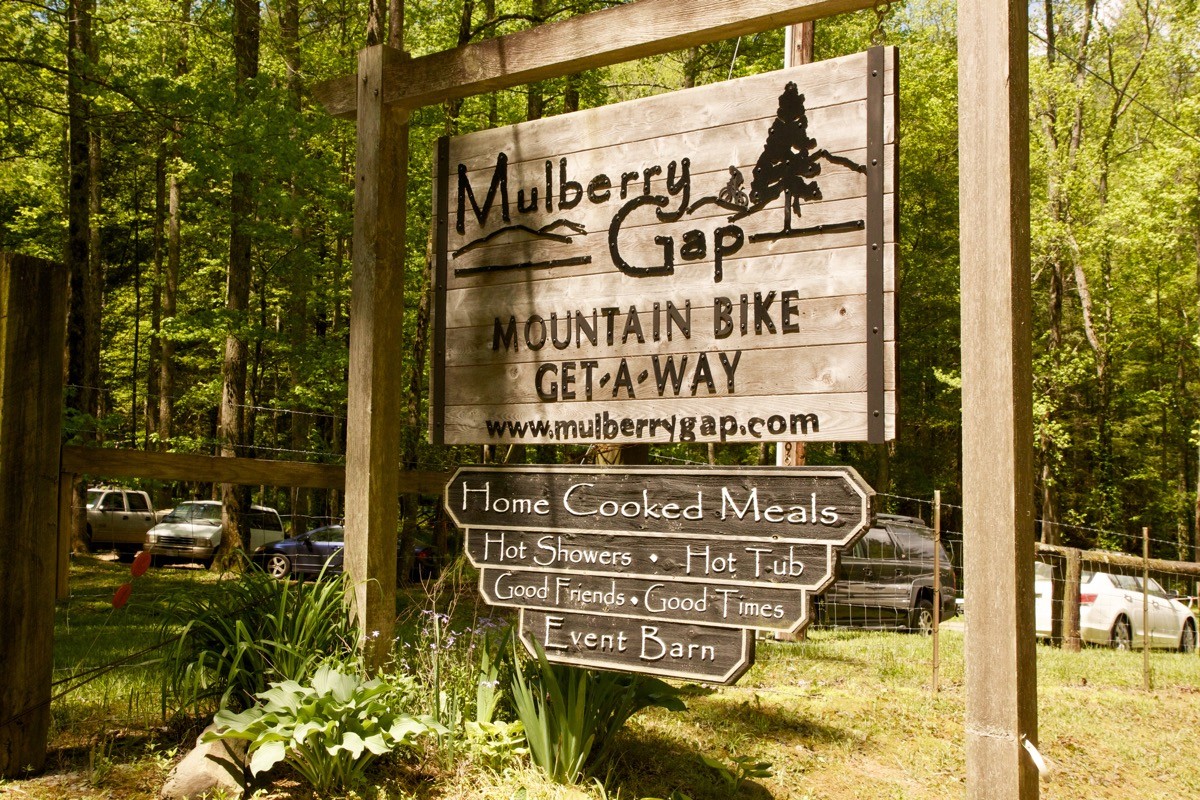 We chose to start our ride at Mulberry Gap, which is a great choice since it puts most of the climbing at the front of the ride. All told, we rode 13 miles on gravel roads to get to the start, and most of that time we were climbing. The worst part of the climb, by far, is the stretch leading from the Bear Creek overlook up to Potato Patch Gap. When I raced the Cohutta 100 several years ago I’m pretty sure I walked the entire climb. This time I rode all the way up but boy, was I wishing for an 11th gear on my 10-speed cassette!

The top of the Mountaintown Creek singletrack starts off smooth and swoopy, and the trail itself is wide like an ATV trail. This was actually the most dangerous part in my opinion, because it’s so easy to build up speed and launch off the whoops without being prepared for the next one. During last year’s Brutal Loop ride my buddy Chris Kelly had a nasty crash a little further down the trail and splayed his knee wide open, kneecap and tendons practically flapping in the breeze. He spent two hours walking out before being driven straight to the hospital. With that in mind, I kept my speed in check and did my best to keep both wheels on the ground because I did not want to miss the rest of this descent!

After about a mile or so the trail starts to get rockier and steeper as it descends toward the first of the 21 stream crossings. The rocks are loose and the roots are slick, which makes the descent all the more wild, and increasingly rare in the mountain bike world. Where we started at the top the leaves were just starting to come out on the towering oak and poplar trees above us but here, down in the gorge, the rhododendron folded us in greenery as the stream grew increasingly chatty.

While the first few stream crossings were rideable, further down the trail the flow became more and more intense. On one particularly deep crossing I instantly became aware of just how buoyant plus-bike tires are as my bike nearly floated out of my grip. As the crossings grew wider, the trail flattened out and the greenery was in full force with tiny purple wildflowers dotting the sides of the track. It was also muddy here, but the type of mud that hangs around all summer long: dark, spongy, and oversaturated with clean mountain water.

By the end of the descent I couldn’t help but compare this ride to some of the seemingly all-day descents the Singletracks crew rode in Colorado last summer. I tried to think of another North Georgia descent as long and as exciting as Mountaintown Creek, but I kept coming up blank. This trail is like a little slice of Colorado, hidden away in the southern Appalachians.

Toward the bottom of the Mountaintown Creek trail there is a section of the Pinhoti that connects over to Bear Creek, but it’s closed to mountain bikers. I’m told there has been talk over the years of creating a bike-legal connection over to Bear Creek but for now, riders have to use the private gravel road to get out to Gates Chapel Road to complete the loop. Just having access to this private road is a victory in keeping Mountaintown open to mountain bikers, thanks in large part to Mike and Terry Palmeri of Cartecay Bikes. Mike and Terry have been a constant force in local MTB access for decades–so long, in fact, that Mike even got a shout-out in the intro to Jim Parham’s book published all those years ago.

Fortunately trails like Mountaintown Creek haven’t disappeared yet, though in some ways, it sorta seems like they already have. With so many new trail choices popping up closer to home, challenging and remote trails are becoming places we tell ourselves we’ll visit when we have time or when we get tired of the local dirt. But if we stop paying attention, these trails might just disappear right from underneath our knobbies.

That was no doubt among the most fun days I’ve had on the bike. And that’s saying something cuz the climb to Mountain Town on the SS was no joke. All smiles from there on for sure including lunch at Mulberry Gap. I’d never strung that whole loop together but definitely a do-over, I’ll bring more Fireball next time. SSM \m/

evenslower – your crew was an excellent addition to the ride this year! We’ll be looking forward to seeing you out there next year.

You hinted at this above when discussing the long gravel road ride to reach this trail, but for me, what’s so special about Mountaintown is the remoteness. You are WAY the heck out in the middle of nowhere riding a rough-and-tumble backcountry-style ride, where you definitely do NOT want to end up like Chris!! IMO, true backcountry rides like this one are a rarity, especially in Georgia, and I savor them when I find them!!

Glad you guys had such an excellent time!

It was a great day to ride and awesome bunch to ride with. Thanks for making it happen. That downhill is pretty fun but IMO not really worth the crazy gravel all the way up!